Articles
Harriet Baskas is an award-winning journalist and the author of eight books. She writes, most often, about airports, air travel, unusual museums, and odd adventures for a variety of outlets, including her blog, StuckatTheAirport.com.
April 09, 2022
•
9 min read 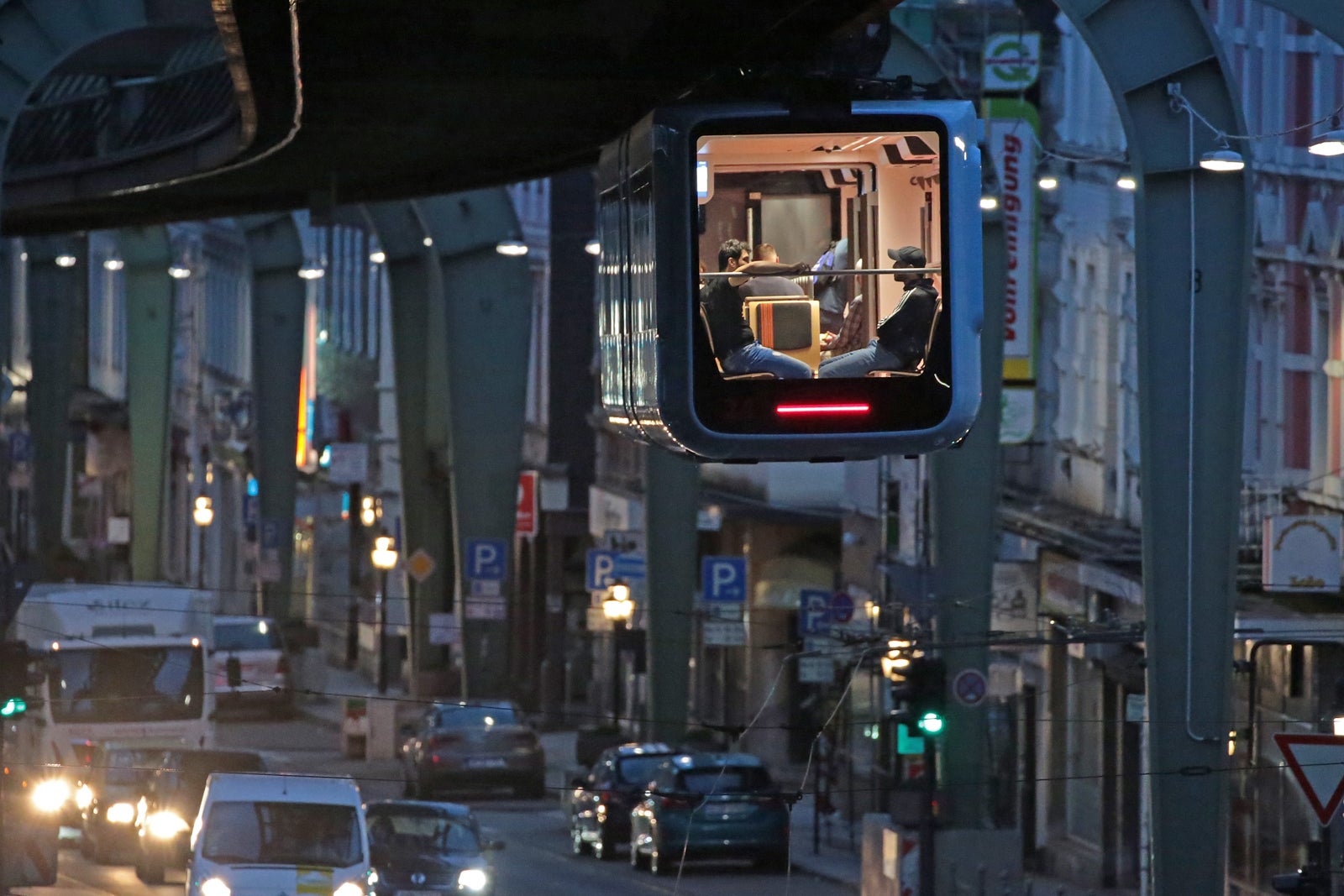 Some days it’s the rude or unruly actions of your fellow travelers that transform a mundane plane, train, or city bus ride into an unusual adventure. Other times, it’s the mode of transportation itself that makes getting from here to there a unique and sometimes exhilarating journey.

Here are nearly a dozen unusual ways to travel, from hot air balloons and cog railways to tundra buggies and rocket ships, to consider for your next trip. Be sure to buckle up, a few of these are guaranteed bumpy rides.

In the recent PBS Masterpiece adaptation of Jules Verne’s Around the World in 80 Days, Phileas Fog and his companions make their way around the globe by rail, sea, camel, and stagecoach. And even though it wasn’t a plot point in the original 1873 novel, they begin their journey by hot air balloon. (Balloon travel became associated with the story with the 1956 film adaptation of the novel starring David Niven)

Floating over the landscape at between 1,000 and 3,000 feet is a dreamy, selfie-friendly way to travel and hot air balloon tours are offered nearby hundreds of cities around the world, from Albuquerque, New Mexico, which is home to world’s largest hot air ballooning festival, to Cappadocia, Turkey. Both cities lay claim to being the hot air ballooning capital of the world.

Visitors to Disneyland in California and Walt Disney Resorts in Florida travel the theme park grounds via monorail, a railway system with train cars that usually straddle a single elevated track. The JFK AirTrain (or people mover) is a monorail familiar to travelers, as is the Seattle Center Monorail, an Emerald City Landmark built for the 1962 World’s Fair.

There are monorails in many other cities, but most unusual are the handful of suspension monorails, where the train cars hang underneath the rail and are sometimes referred to as upside-down trains. The oldest such suspension railway is the Schwebebahn in Wuppertal, Germany, which opened in 1901. The 8-mile network serves as both an urban transit line and a tourist attraction and, when its update is completed, the line’s Imperial Carriage will once again be available for weddings.

Funiculars, or incline railways, are counterbalanced railways used as transportation on steep mountains and on some challenging urban grades. Hong Kong’s Peak Tram, which travels almost 4,500 feet up Victoria Peak, dates to 1888 and is one of the oldest in the world. (The iconic line is undergoing a renovation and should reopen in Summer 2022). Switzerland’s Stoos funicular railway is the steepest in the world. And Angels Flight Railway, which first opened in 1901, is not only the last remaining incline railway in Los Angeles, its steep journey of just 298 feet (one block) between Hill Street and Grand Avenue on Bunker Hill makes it the world’s shortest railway.

Skiers, snowboarders, and riders of the Skyliner at Disney World, are familiar with aerial tramways and gondolas.

Cog railways travel on very steep grades thanks to train cars outfitted with cog wheels that fit into toothed rails between the tracks. And two of the world’s most famous cog railways are here in the United States.

In the White Mountains of New Hampshire, the Mount Washington Cog Railway (“The Cog”), celebrated its grand opening in 1869 and lays claim to being the world’s first mountain climbing cog railway and the second steepest cog railway in the world after the Pilatus Railway in Switzerland.

In Colorado, the Broadmoor Manitou and Pikes Peak Cog Railway reigns as the world’s highest cog railroad. Opened in 1891, the train travels from Manitou Springs 9 miles up to the summit of Pikes Peak.

Beer bikes, pubs on wheels, pedal pubs, party bikes, or bar cycles. Whatever you call them, the multi-rider, open air, rolling contraptions with bar stools that double as bicycle seats first appeared in the Netherlands in 1977. The people-powered pub crawl conveyance that’s now very popular for bachelor and bachelorette parties has now spread to dozens of cities around the world.

Once place you will no longer encounter beer bikes, though, is in and around Amsterdam’s city center where, due to complaints, the bikes have been banned since July 2019.

Municipal elevators around the world often do double duty as convenient forms of transportation and tourist attractions offering adventures and access to great views.

Salvador, Brazil is home to the lovingly restored 191-foot tall Elevador Lacerda. In Lisbon, Portugal the wood and brass cabs of the 148-foot tall, Eifel Tower-inspired Elevador de Santa Justa bring visitors to the one of the best viewing points in the city.

In the U.S., our favorite municipal elevator is both historic and modest. It’s located in Oregon City, 12 miles south of Portland, on the Willamette River. The original 1915 elevator was water powered and replaced a 722-step stairway with an 89-foot ride that took three to five minutes. The current elevator is powered by electricity and travels 130 feet along vertical Elevator Street in 15 seconds. Better yet, the Oregon City Municipal Elevator is free to ride and has live operators.

The first Ferris wheel was 264-feet tall and erected in Chicago for the World’s Columbian Exposition of 1893. Since then, these wheels of amusement keep on turning – and turning up – in more and more cities. And they keep getting taller and bigger.

The Ain Dubai observation wheel opened in 2021 and, at 820-feet tall, is currently the tallest and biggest Ferris wheel in the world. 2nd place is now held by the 550-foot-tall High Roller in Las Vegas, with the 541-foot-tall Singapore Flyer not far behind in third place.

One of the best places in the world to see huge polar bears in the wild is in Churchill, Manitoba on the west shore of Hudson Bay. In the self-proclaimed Polar Bear Capital of the World, polar bear experiences for tourists include walking tours and tours on buses, in cars, boats, Zodiacs, bush or float planes, and helicopters. But setting out in one of the area’s specially designed, high off the ground, tundra-ready vehicles known as tundra buggies or polar rovers (depending on which tour company you choose), offers a unique and very safe way to see these endangered bears.

If you’ve got plenty of cash in your travel budget and want to spend your vacation somewhere truly out of this world, it is now possible to make a reservation for a trip into space without being a professional astronaut.

Waiting lists are long and ticket prices are sky high, but Spaceline Virgin Galactic is taking reservations for 90-minute spaceflights at a cost of $450,000 a seat and Blue Origin’s website is taking names and promising to send pricing information when reservations open for 11-minute flights in its New Shephard space vehicle. Just because a suborbital rocket flight is short, don’t expect a deal on ticket prices: a seat on Blue Origin’s first flight went at auction for $28 million.

If you’re don’t have enough cash to purchase, or the patience to wait for, a seat on a rocket ship, there is another way to travel like an astronaut and experience weightlessness. Zero G Experience’s modified 727 Boeing airplane, dubbed G-Force One, is making stops around the country offering zero-gravity adventure flights for prices that start at ‘just’ $8,200. Check the schedule for a touchdown near you.

What transportation systems will we use in the future? In the short term, railroads, trams, subways, airplanes and yes, even beer bikes, are likely to stick around. But we’re looking forward to regularly-scheduled commercial space flights, supersonic commercial jets, high-speed hyperloop lines, and flying taxis. What about you?

Featured image by picture alliance via Getty Image
Editorial disclaimer: Opinions expressed here are the author’s alone, not those of any bank, credit card issuer, airline or hotel chain, and have not been reviewed, approved or otherwise endorsed by any of these entities.