Articles
Ethan Steinberg has been a frequent flier for as long as he can remember. He went from studying abroad in Paris to moving to Shanghai after graduating college, where he covered all things travel in the Asia-Pacific region for TPG.
June 30, 2020
•
12 min read 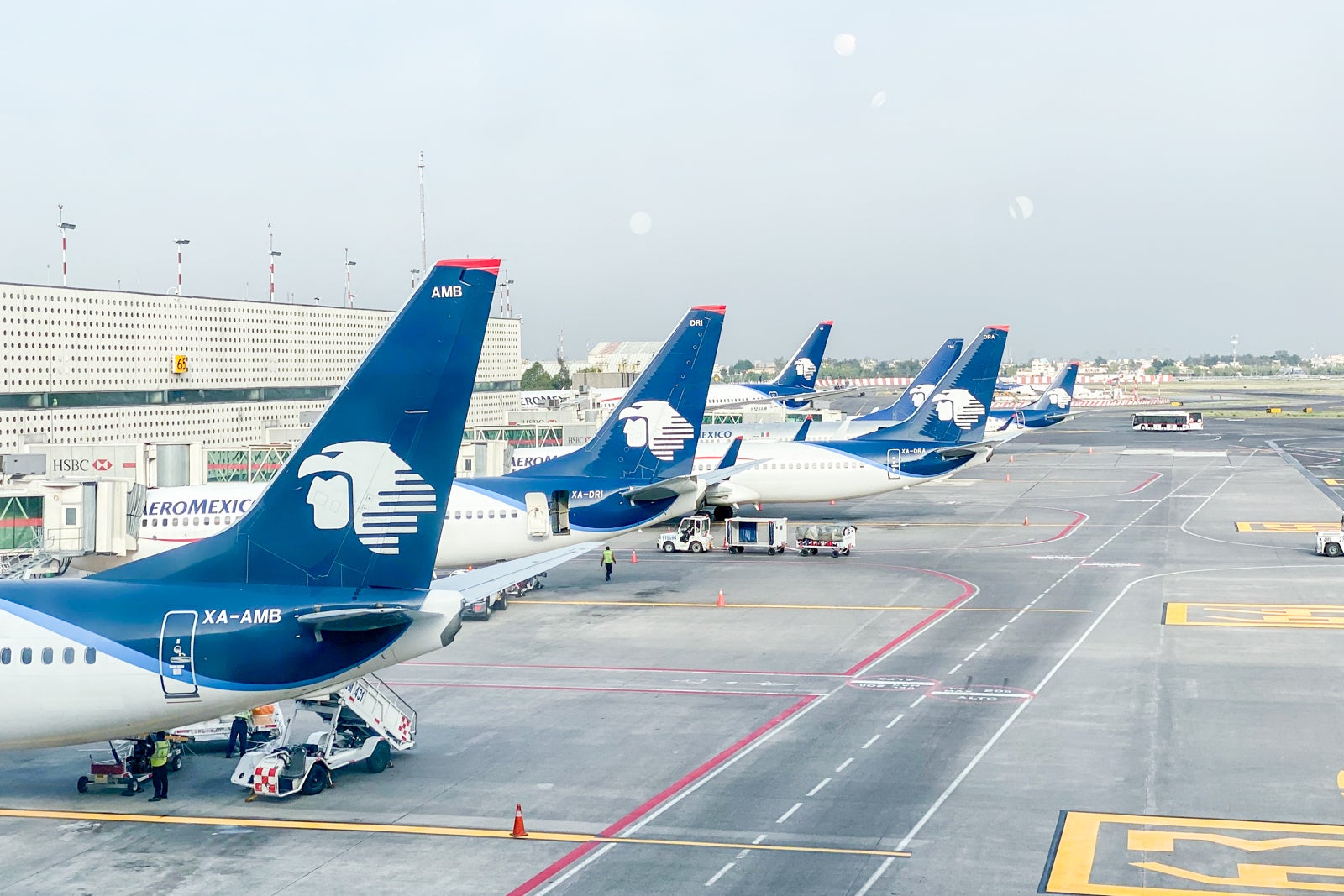 With the U.S. legacy carriers adopting similar revenue-based earning structures and elite tiers, it has become increasingly important to look to foreign carriers to find value. This is especially true for frequent SkyTeam travelers who have seen an incredible amount of value wiped out of two of the alliance's most prominent loyalty programs. Specifically, Delta SkyMiles and Air France KLM Flying Blue were two of the first frequent flyer programs to switch to dynamic award pricing.

If you're looking for a new program for SkyTeam redemptions, look no further than Aeromexico's Club Premier. This program can offer a fairly solid value if you're willing to push through some of its quirks. There is one important thing to pay attention to: because Aeromexico uses “kilometers” instead of “miles,” you'll want to be careful about which transfer partners you leverage to top up your Aeromexico account. Today we'll walk through everything you need to know to earn and burn Premier points efficiently.

Aeromexico uses a distance-based earning chart, rather than the revenue-based ones that the major U.S. airlines use. You’ll earn anywhere from 25% to 200% of the miles you fly. It depends on your ticket fare class. Aeromexico has three different earning charts for flights within Mexico, flights to the U.S. and Canada, and one for the rest of the world. You can see the earning chart for flights to the U.S. and Canada below, with basic economy flights earning 25% of the miles flown, regular economy earning 50-125%, and business class passengers earning 200%.

If you’re crediting flights on a SkyTeam partner to Club Premier you’ll still earn based on the distance of your flight and the fare class of your ticket. Aeromexico has a different earning chart for each of its SkyTeam partners. However, they all follow the general principle of deep-discount economy tickets earning very few miles, with the rates increasing as you move to more expensive tickets.

For example, here’s the earning chart for Delta flight credit to Aeromexico. This follows a similar pattern to Aeromexico’s own earning chart, though there are several partners with lower earning rates as well.

In addition to crediting SkyTeam flights to Club Premier, a number of popular transferable programs also partner with Aeromexico:

Citi ThankYou points transfer to Aeromexico at a 1:1 rate. You can earn CitiThankYou points with credit cards like the Citi Prestige® Card and Citi Premier® Card. Both of these cards offer generous welcome and category bonuses that make it easy to earn points on everyday spending. The information for the Citi Prestige card has been collected independently by The Points Guy. The card details on this page have not been reviewed or provided by the card issuer.

Miles earned on cards like the Capital One Venture Rewards Credit Card and Capital One Spark Miles for Business transfer to Aeromexico at a 1:1 ratio.

It’s fairly easy to earn Marriott points thanks to the program’s partnership with Chase and American Express. There are five Marriott credit cards you can choose from to give your account balance a boost.

While all these different ratios are bound to get confusing, it's important to remember where your points are coming from in order to decide whether an Aeromexico redemption is a good value. Club Premier uses a relatively inflated pricing scheme, which makes matters more complicated. But generally speaking, the best values will come from Amex transfers which offer the highest ratio.

Related: When does it make sense to transfer Marriott points to airlines?

Most airlines utilize different award charts for flights on their own metal and those operated by partners. Aeromexico is no different. Whether you're flying on Aeromexico or a partner airline, you can have one stopover per round-trip award, which is a great deal and an increasing rarity. This might be a great way to see Mexico en route to another South American destination. Or perhaps see two cities in Asia or Europe for the price of one.

Round-trip Aeromexico award flights to or from Mexico are priced based on the chart below. Rates depend on whether you're flying in economy or business class and the travel season.

One way awards are available for half the cost. For flights that use Mexico as a connection but not the final destination, you can refer to this chart.

Of course, most U.S. based travelers will be primarily interested in flights to and from Mexico. Thankfully Aeromexico is lenient in what it classifies as "high season" (Easter, June to mid-Aug. and Dec. to mid-Jan.). During low season, one-way flights start at 28,000 Premier Points.

Related: A review of Aeromexico’s business class on the 787-9

You can construct some solid deals by routing through Mexico. For example, a one-way ticket from the U.S. to Buenos Aires (EZE) is only 48,000 Premier Points (or 30,000 Membership Rewards points).

Note that these rates are in line with what other major airlines such as American and United would charge you. The advantage comes when you compare to another SkyTeam carrier like Delta, who might charge you a little bit less or considerably more for the same one-way economy ticket.

It's hard to tell exactly what counts as a "saver" award with Delta these days, but you can book one-way awards within the U.S. for only 20,000 Premier Points, or 12,500 Membership Rewards points. You could also potentially book the same flight by transferring roughly the same number of Amex points directly to Delta. Outside of the occasional transfer bonus offered by American Express, there isn't a good incentive not to book directly.

Round-trip business class flights to North or Southeast Asia will set you back 256,000 Premier Points or 160,000 Membership Rewards points. While every airline has a slightly different pricing scheme, I'd say 80,000 miles each way in business class is about as close to the industry average as you can get. The same thing can be said of round-trip economy tickets to Europe: 96,000 Club Premier points, or 60,000 Membership Reward points, is an aggressively average price.

You might end up saving a few thousand miles relative to other programs on flights to certain parts of South Asia or North Africa, but nothing to get too excited about. Don't get me wrong, the devaluations to Flying Blue and Delta should make any loyal SkyTeam flyer crave a consistent, average award chart, but for the price-conscious among us, Aeromexico doesn't do much to stand out.

Related: Book this, not that: SkyTeam award tickets

Aeromexico Go Round The World Pass

While Aeromexico's standard award chart is pretty run-of-the-mill, there's one reason that I'm still excited to see Club Premier transfer options popping up all over the place: The SkyTeam Go Round The World Pass.

While this type of mega trip obviously won't be for everyone, it offers a huge value boost to the most adventurous among us. Let's start with the terms and conditions, which are among the most generous of any round the world (RTW) pass available:

You can book this multi-city extravaganza in either economy or business class at the following rate:

The sky's the limit as to what you can do with a trip like this, but here is one of the infinite possibilities for redeeming this RTW pass.

To make your planning a little easier, I would suggest making sure that every flight segment is either to or from a SkyTeam hub. That way, you'll have an easier time finding award space.

All elite members receive bonus points on eligible flights, along with the following perks:

Top tier Titaniums have access to one very unique perk that I wish other airlines would copy. Once a year, they’re guaranteed an Aeromexico award ticket as long as there are available seats on the plane.

With lots of ways to earn Aeromexico Club Premier Points, it's worth familiarizing yourself with this program. It rises above the crowd because it offers consistency at a time when SkyTeam redemptions are increasingly expensive and unpredictable.

If you find yourself getting price gouged by Delta or Flying Blue, Club Premier can offer a great alternative. By far the best value though lies in the round the world pass, which features lax terms and generous pricing. Even on shorter trips that only include three to four stops, you might come out ahead choosing this option over a conventional award ticket.

Featured image by (Photo by Nick Ellis/The Points Guy)
Editorial disclaimer: Opinions expressed here are the author’s alone, not those of any bank, credit card issuer, airline or hotel chain, and have not been reviewed, approved or otherwise endorsed by any of these entities.