Everything you need to know about traveling with medication

Articles
Jordi Lippe-McGraw is a writer covering travel, family, food and wellness for outlets like Conde Nast Traveler, Travel + Leisure, the New York Times, Forbes, and more. She has traveled to more than 30 countries on all 7 continents (including Antarctica at 5 months pregnant) and is an avid puppy, penguin, and truffle lover.
Follow
April 24, 2022
•
6 min read 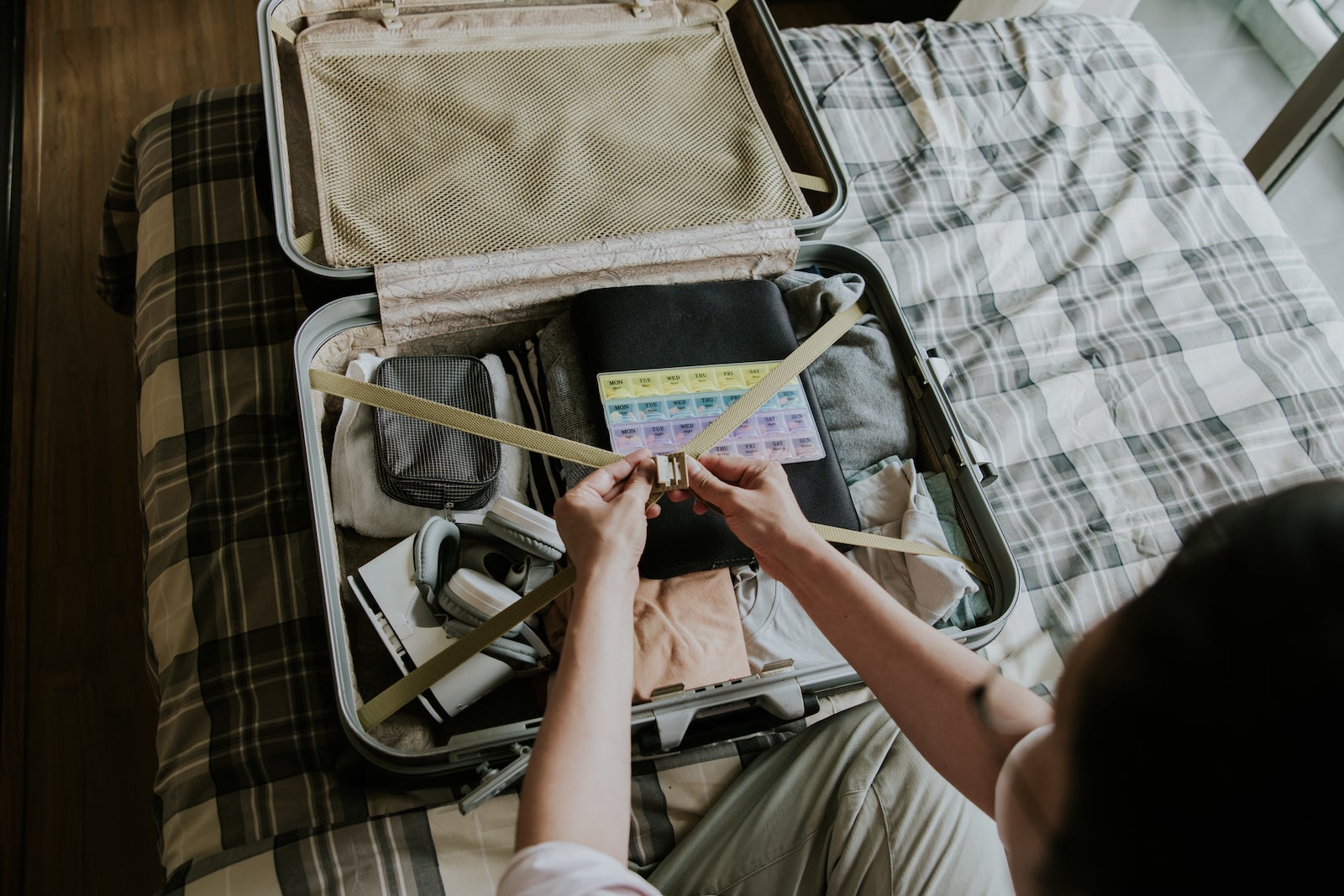 While getting to travel is an incredible opportunity, it doesn't always come without some annoyances.

In addition to ongoing COVID-19 testing requirements and restrictions, you also have to deal with packing — in particular, how to pack medication you might need on the trip. After all, the last thing you want during a getaway is to run out of prescription medication (especially if you're stuck someplace due to a positive coronavirus result) or come down with a nasty head cold without access to over-the-counter medications.

That's why it's essential to know certain key details when hitting the road with medications in tow. To find out the best way to be prepared for your vacation, TPG spoke with Dr. Julian Klapowitz of Travel Medicine Consultations, who shared everything you need to know about traveling with medication.

Should I pack my medication in my carry-on bag?

The short answer is yes; that way, you don't risk losing essential medicine in your checked luggage. In fact, the U.S. Centers for Disease Control and Prevention specifically recommends carrying your prescription medication.

"If I give someone three months of malaria pills, I still tell people to put everything in their carry-on," said Klapowitz. "That way, it doesn't accidentally get lost. Plus, the luggage storage area of the airplane can be freezing. So, anything liquid — like insulin — may end up frozen."

How much medication am I allowed to bring?

Generally speaking, 30 days' worth of medication is acceptable pretty much everywhere. If it's more than that, a doctor needs to provide a note, and you should also have the original prescription, according to Klapowitz. Just allow for extra time at security if you have larger amounts of pills or liquid medicine that doesn't fall into traditional TSA guidelines.

When traveling internationally, the quantity issue really boils down to the types of medications allowed in your destination.

What if I'm traveling for an extended period?

The same answer from above pretty much applies here.

"If you're traveling for more than 30 days, try to have the medication you will need for the entirety of the trip," said Klapowitz. "But, again, those larger quantities will require a doctor's note and original prescriptions to prove the need to travel with that amount."

How do I get medication abroad?

If you don't have enough medicine to get you through an entire vacation or are stuck needing something abroad, there are ways to get medication. Interestingly, the U.S. is more strict regarding many medications than many other countries where you can purchase antibiotics, blood pressure medications and a variety of other pills over the counter.

But, in some destinations, counterfeit medications are a major problem.

"You should be fine to walk into a pharmacy or doctor's office in places like Western Europe and know it's safe," said Klapowitz. "If you're somewhere that's not as reliable, contact the nearest U.S. embassy or consulate. They should be able to get you in touch with reputable doctors and pharmacies."

Are there destinations that have medication restrictions?

Yes, some destinations do have medication restrictions. For example, Japan doesn't allow certain allergy and sinus medications, and types of inhalers are illegal. Plus, travelers to the United Arab Emirates have ended up in prison because the country has strict narcotics laws.

"Before traveling internationally, check with the foreign embassy of your destination to make sure your medicines are allowed in that country," said Klapowitz. "If it is banned, talk with your doctor about possible alternatives. Or, if you plan to travel with it, be sure all medication is in the original bottle.

"You should also have a doctor's letter explaining the condition and need for the specific restricted medication and an original prescription," Klapowitz added. "Of course, it's not guaranteed you'll be allowed to keep it, but it certainly increases your chances."

Which medications are often restricted?

The most common banned substance is narcotics. "If somebody is thinking about taking codeine, Percocet, Vicodin or methadone, I usually advise to see if it's possible to travel abroad without them," said Klapowtiz.

"The same is true for some regulated psychotropic medications like Adderall and Ambien. But always do your research on the specific destination."

How can I travel with a restricted medication?

Unfortunately, sometimes the answer is that you just can't travel with restricted medication.

But, countries will have a variety of rules — i.e., allow 30-days' worth — so it's important to contact the embassy to see what's allowed. "

Again, if you plan to travel with a restricted medication, be sure you have the documentation to back it up, and everything is clearly labeled," said Klapowitz.

What if my medication is liquid?

If traveling domestically, liquids are allowed so long as they adhere to the TSA's 3.4-ounce rule and fit in a quart-sized bag.

The TSA will allow you to travel with more than that amount, but you must declare the liquid medications to TSA officers at security for inspection.

"The same is basically true for international destinations, so long as it's not a banned substance," said Klapowtiz. "Just be sure to have the original prescription and doctor's note, and leave time for extra security checks."

Can I bring syringes?

Usually, bringing sharp, pointy objects onto a plane isn't allowed. But, some medicines require the use of syringes or needles.

"If you have diabetes, for example, have the same documentation as you would for a restricted medication," said Klapowitz. "Unused syringes and needles are allowed when accompanied by the medication, prescription and doctor's note."

Are there medications I should always bring with me when I travel?

"I always recommend bringing Tylenol, Motrin or Advil for pain and fever, and Imodium for mild diarrhea," said Klapowitz.

"You should also consider taking an antacid if the local diet doesn't agree with you. Then, for anybody who gets motions sickness, pack Dramamine."

In addition to those standard medications, Klapowitz suggested bringing any OTC medications you commonly use.