Articles
Lori Zaino is a writer for TPG and TPG UK covering travel, news, points and miles and more. She's been based in Madrid, Spain almost 15 years and is an expert in travel throughout destinations such as Europe, Southeast Asia and Africa.
Follow
Sept. 13, 2018
•
10 min read 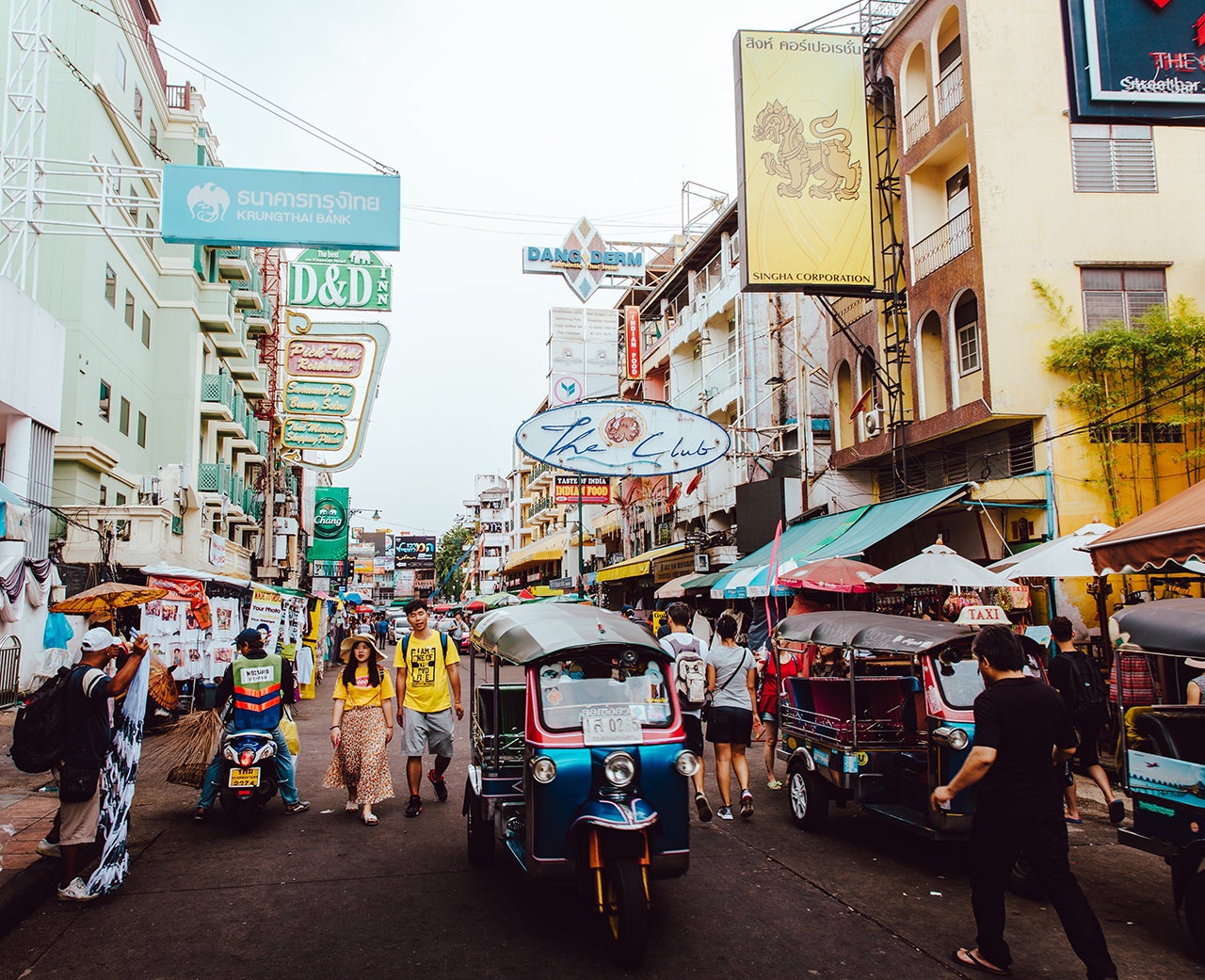 Although most locals are friendly and welcoming, some people do exploit first-time visitors with scams and schemes. Before you book a vacation to Thailand, be aware that certain tricks are quite common. Because there's no better way to avoid falling victim than to be prepared, watch out for these six tourist scams during your trip.

During a trip to Thailand, a seemingly official Thai officer told me, "the Grand Palace is closed." But something seemed fishy to me, and my gut told me to ignore him, which I (hesitantly) did.

Later, I learned this scam was a classic in the Thai tourist scheme book. A local (typically costumed as a security guard, officer or tour guide) will tell you the Grand Palace is closed, and offer to give you a tour of other temples instead. Occasionally, you might be told that you're not properly dressed, and won't be allowed entrance to the Palace.

You'll likely end up paying a very expensive tuk tuk to take you to his friend's tailor shop, or to buy gems, which is also a scam. Worse still, you'll miss the Grand Palace.

How to avoid it: Don't be afraid to ignore anyone who tells you the palace isn't open. Check the hours online and, if you're concerned, have your hotel call to confirm that the palace is open before leaving the property. Clothing can be a concern, so be sure to cover your knees and shoulders to gain access to the Grand Palace. But if you forget, don't panic: you can rent clothing at the main entrance of the temple.

Renting a motorcycle or jet ski is common around Thailand. I've rented scooters on numerous occasions — sometimes for as little as 200 THB (about $6) per day. However, it's easy for scammers to prey on renters when they return the jet ski or the scooter, claiming the vehicle has been damaged and demanding money. If you don't pay up, they may keep your passport, or threaten to take you to the police (who, unfortunately, may be in on the scam, too).

How to avoid it: While giving your passport for scooter rentals may be unavoidable (you can ask if they'll accept a copy or a cash deposit instead), always take photos and a video of the vehicle before renting, clearly pointing out any scratches or issues beforehand. I deliberately make sure the person who's renting the vehicle sees me do this, so he or she knows they can't get away with a scam later. Ask your hotel to recommend a trustworthy spot to rent scooters or jet skis, which helps weed out scammers. And in extremely touristy areas such as Pattaya or Patong, it may be best to avoid jet ski rentals entirely.

TPG's Editor-at-Large, Zach Honig, almost fell for the gem stone scam when he was approached by a well-dressed man named 'Charlie,' supposedly the head of security at his Bangkok hotel. Charlie told him the Grand Palace was closed (sound familiar?) and he should head to other locations instead — one being the wholesale gem market.

After Honig perused the gems at the Exotic Center Gem market, he returned to the tuk tuk Charlie had arranged and asked to be taken to the Grand Palace. But the driver was taking him in the wrong direction, forcing Honig to hop out and hail a taxi. He may not have completely fallen for the scam and purchased gems (which are often fake or grossly overpriced), but many tourists do. Often, the people orchestrating the scam claim to be security officers for either hotels or malls, luring travelers with a false sense of safety.

Like gemstones, travelers may be tricked into purchasing unauthorized electronics, so be wary of anything you buy in a non-conventional setting. That camera, iPhone or set of noise-canceling headphones won't have a warranty, so if it breaks after purchasing, you'll be left without options.

How to avoid it: Unless you're a gem expert, stay away from jewel markets in Thailand, especially Bangkok. Avoid purchasing large ticket items or electronics at markets, too: if you really need something, go to a mall and shop at a store where you can get a valid receipt. "If something's feeling off, use your smartphone to search for keywords that describe the experience," Honig suggested. "If you're being taken for a ride, you should come across similar accounts posted online."

You may be coaxed into having a custom-made suit or dress at a nearby tailor shop. You'll hear the same pitch from the tailor or their friend: a celebrity from your country always gets his or her clothing made at this tailor shop, and the tailor has worked for years in designer goods. Of course, once you've chosen your style, you'll be asked to pay a large sum of money upfront. When you go back to pick up your items, the shop may be mysteriously closed, or your new suit isn't quite as promised.

How to avoid it: If you want garments made, research the best tailors beforehand online, or speak to someone at your hotel for a recommendation. Never pay the entire cost upfront either.

During your trip to Thailand, you'll almost certainly hop in a cab, take a bus or ride in a tuk tuk, if not all three. But be wary, as all three methods of transportation can be abused by swindlers and cheats.

Every time I grab a taxi in Thailand, I insist they turn on the meter — and you should do the same. Expect them to argue and try to fix a rate (usually 5 to 10 times what the price would be on the meter) before eventually agreeing to use the meter. Know that drivers can still tamper with the meter to move at a faster rate than normal, or say they don't have change when given a large bill.

How to avoid it: Use the apps Grab or Hailo to ensure you know the fair price of the trip, even if you end up using a cab. If your driver won't turn on the meter, simply get out. (If you're leaving from a hotel, have a staff member demand meter use in Thai.) And having a variety of small bills will help if the driver can't — or won't — make change.

Booking long-haul bus routes can often end in disaster. Some drivers, rather than take you to the bus station, will drop you far away from the city center — conveniently at a friend's hotel late at night, or in front of a buddy's tuk tuk stand.

How to avoid it: No matter how legitimate it seems in the tourist office, don't take long or overnight bus rides unless absolutely necessary. Just fly instead. If you have to cut costs, do so elsewhere.

There are several variations of the tuk tuk scam, including the aforementioned gem market ploy (that pushy driver was probably getting commission). The driver may also change the fare once you're inside the tuk tuk, or offer to give you a city tour at an exorbitantly low price — but all you'll see are the gem and tailor shops of friends, rather than real tourist attractions.

How to avoid it: Tuk tuks are much more expensive than taxis, so avoiding them entirely can save you money. That being said, it can be fun to try them. If you're inclined to do so, write down the agreed-upon price so it can't be disputed later, and stay firm about your destination. Don't do any 'tours' with a tuk tuk driver and always choose your tuk tuk, and avoid ones that approach you.

If you're ever approached by someone offering a canal tour at a too-good-to-be-true price, you're right to be suspicious. With tour boat scams, you may at first get a great rate and even a fun ride, but as the tour concludes and you approach the pier, the captain will stop and the guide will demand more money. Unfortunately, you'll probably have to pay — unless you want to swim to shore.

How to avoid it: Don't boat with anyone who approaches you, period. If you want to do a canal tour, organize it in advance with an agency or through your hotel. Be wary of extremely low prices.

Be wary of anyone who approaches you to offer a service or goods. If you need something, like a taxi, it's best to approach them. Be extra cautious when traveling solo, and trust your instincts. If something seems fishy, it probably is! Having internet access on your phone is also helpful. If something doesn't feel right, take Honig's advice and Google it: If it's a scam, it's likely happened to others and been widely reported.

And this goes without saying, but watch your personal belongings and always lock your passport in the hotel safe. Theft may not always be accompanied by a complicated hustle, but it can still ruin your trip.

What to do if you're a victim

If you've been a victim of a serious scam, contact the tourist police immediately. Staff at your hotel may also be able to help.

Keep the following emergency numbers handy when traveling to Thailand:

Featured image by (Photo by Evan Krause via Unsplash)