How Much PDA Is Too Much for the Airplane? 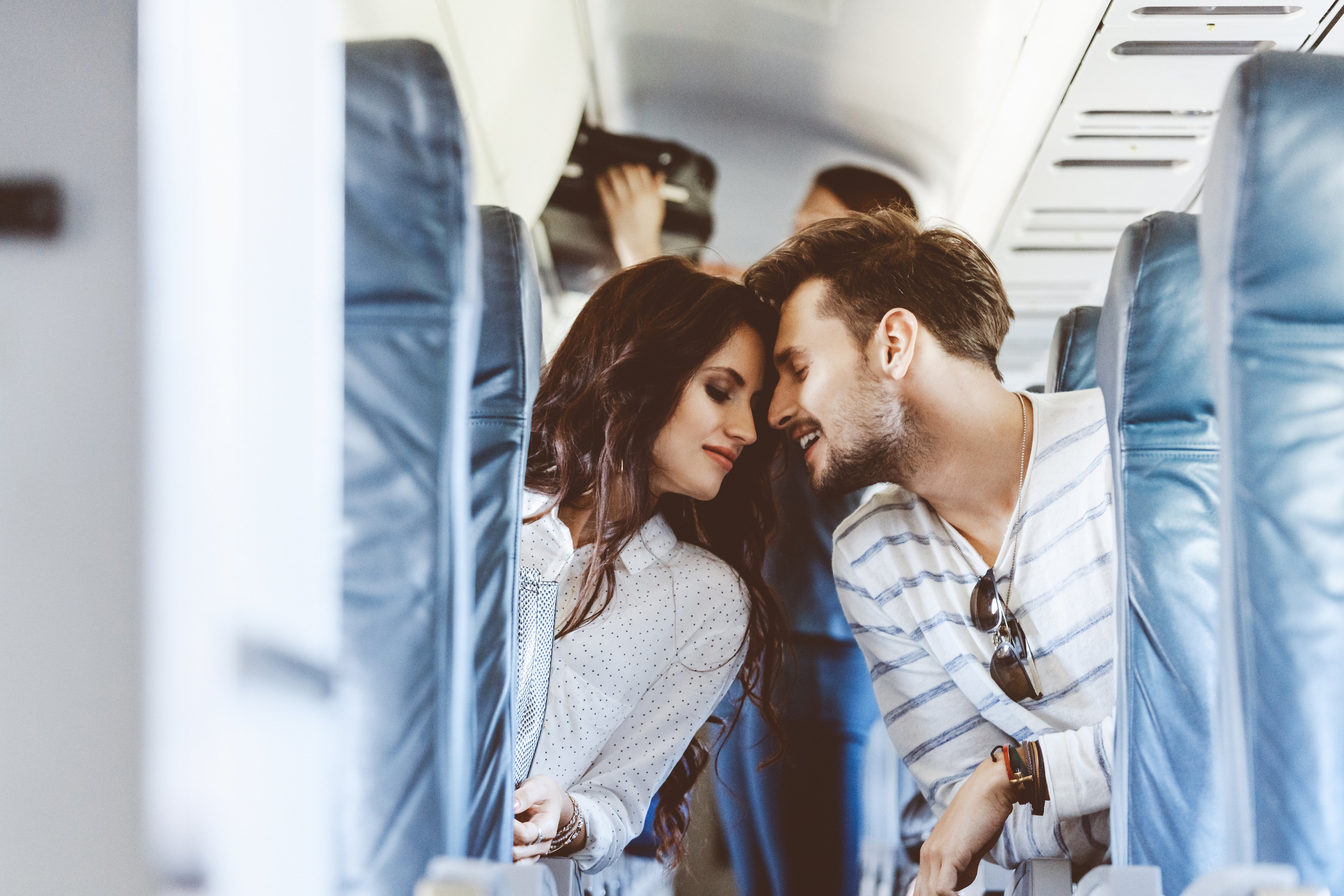 We all have our own tactics for coping with the stresses of flying. Some passengers snooze, others plow through work and a few even take the time to exercise. And then there are those who resort to, er, other ways of relieving tension in the air. Plenty of us have been guilty of a little public display of affection during our travels, but how does that work at 30,000 feet? At what point do the friendly skies start getting a little too friendly?

We asked TPG readers to weigh in on PDAs in airports and on airplanes, and the responses were surprisingly mixed.

Rachel M. admitted that when she flies with her husband, they sometimes “enjoy PG-13 cuddles."

Bothered by the in-flight nuzzling? "Deal with it," she said.

Grant G. was similarly permissive, noting that “as long as pants stay on and hands stay outside of pants, no objections here … I’m capable of averting my eyes.” Amanda B. also took a live-and-let-live approach: “I personally wouldn’t put myself on display like that, but whatever works for you.”

Of course, not everyone was so cool with in-flight hanky-panky. Rachel T. doesn’t mind simple “kisses, cuddles and the occasional well-placed tickle" — wait, is that a thing? — but she’s still haunted by a “four-hour, tongue-in-mouth makeout session on the way back from Vegas.”

And both Jim D. and Fred S. urged passengers to keep things buttoned-up and limit the PDA to “anything you’d be okay with your grandma watching” and “the same level you would display in church,” respectively.

So the traveling public may be split on this one, but where do the airlines themselves stand?

Dan Air, the 14-year-veteran British flight attendant behind Confessions of a Trolley Dolley, told TPG that he doesn’t know of “any particular policies regarding public displays of affection."

"My airline doesn’t have anything specific in our operation manual," he explained. "It’s more a case of us using our discretion and common sense on these occasions.”

Indeed, we couldn’t find any specifically anti-PDA policies on major Western carriers, though of course decorum differs throughout the world; one man inadvertently caused a kerfuffle simply by kissing his wife on the cheek while his plane was taxiing last year at Atatürk International Airport (IST) in Istanbul.

But PDA quickly becomes illegal when it escalates into something more, as TPG contributor and longtime flight attendant Carrie A. Trey reported in 2015. Cross the line into indecent exposure, and Trey warned that you will “undoubtedly wind up in jail, will probably be fined and are likely to find yourself on a few no-fly lists.” Yikes.

You certainly won’t get away with anything of the kind on a flight with Dan Air, who busts up bathroom bawdiness the moment he becomes aware of it. “They don’t get to stay in there for very long before I bang the door down or open it myself to oust the unsuspecting couple (we have a way to open the lavatory from the outside).”

Although Trey has never encountered a specific rule against joining the Mile High Club at any of the four airlines she’s worked for, she leaves us to ponder a very sensible question: “Why would you want to? You’re essentially choosing to copulate in an airborne porta-potty.”

So sex in the skies is a big no-no, not to mention kind of gross. But what about the more PG and PG-13 stuff, like kissing and canoodling, or even getting a bit handsy? How much passion can passengers get away with at their seats, and what’s just plain uncouth?

For some professional guidance, TPG checked in with Elaine Swann, one of the country’s leading etiquette experts and founder of the Swann School of Protocol. She recommended that travelers keep their amorous exploits limited to just “a quick kiss or hand holding. Once you get to the point where you’re tonguing your partner down, you’ve crossed the line of good manners.”

She went on to remind us that “etiquette is less about a bunch of rules one has to follow, and more about putting others at ease. So keep in mind as you’re traveling with your partner, whether celebrating an anniversary or just taking a quick trip somewhere, that your goal is to not make people uncomfortable in a place they can’t escape from.”

If you do find yourself stuck next to passengers who are getting too hot and heavy, follow the advice of Patricia Napier-Fitzpatrick, the respected founder and president of the Etiquette School of New York. “It’s best to let a person of authority handle an issue like this, rather than trying to handle it yourself. I would have the flight attendant ask the parties involved to maintain the proper decorum while they are on the airplane.”

If you’re too shy to go to the flight attendant directly, try Swann's subtler, sneakier method: “Act as if you don’t notice the offending couple and simply press the call button, so the flight attendant will have to come directly to your seat. Then ask for a cup of water, a Kleenex, whatever. This should prompt the couple to stop whatever they’re doing.” Genius!

Of the dozen or so frequent travelers interviewed for this article, most had never witnessed in-flight PDA that they’d consider a breach of etiquette, though they all had similar ideas about where that line would be.

Patrick Rudewicz, a Boston-based tech recruiter who regularly flies long distances for work, had a typical take on the matter. “It isn’t courteous to display excessive affection on an airplane," he said. "A kiss or curling up next to someone while you sleep is acceptable, but making out — or beyond — would be going too far.”

Ian Centrone, whose work as a travel writer sends him flying all over the globe, has had his “fair share of experiences sitting next to overzealous lovebirds.” He’s a softy at heart, admitting that “holding hands on a plane or stealing a kiss here and there is actually a sweet gesture. But nobody wants to be stuck on a long-haul flight next to the couple who can’t keep their tongues to themselves.”

No one’s going to flip out over a red-eye snuggle or peck on the lips on board. But an airplane isn't Lover’s Lane, and passengers aren’t teenagers in a parked car — we’re mostly grown-ups, stuck together for a few hours in a cramped tube. A minimum of courtesy and restraint will go a long way.

And if you do find yourself feeling frisky while flying — and you didn’t shell out for access to a (cold) shower — just take a hint from the "New York Post" and “try reading the emergency safety pamphlet. If that doesn’t kill your mood, nothing will.”