Articles
Tarah Chieffi is a family travel writer for TPG. Whether she’s sharing tips for planning the perfect theme park trip or finding a kid-friendly hotel, her goal with every story she writes is to inspire families to get out and explore the world.
Follow
April 20, 2022
•
9 min read 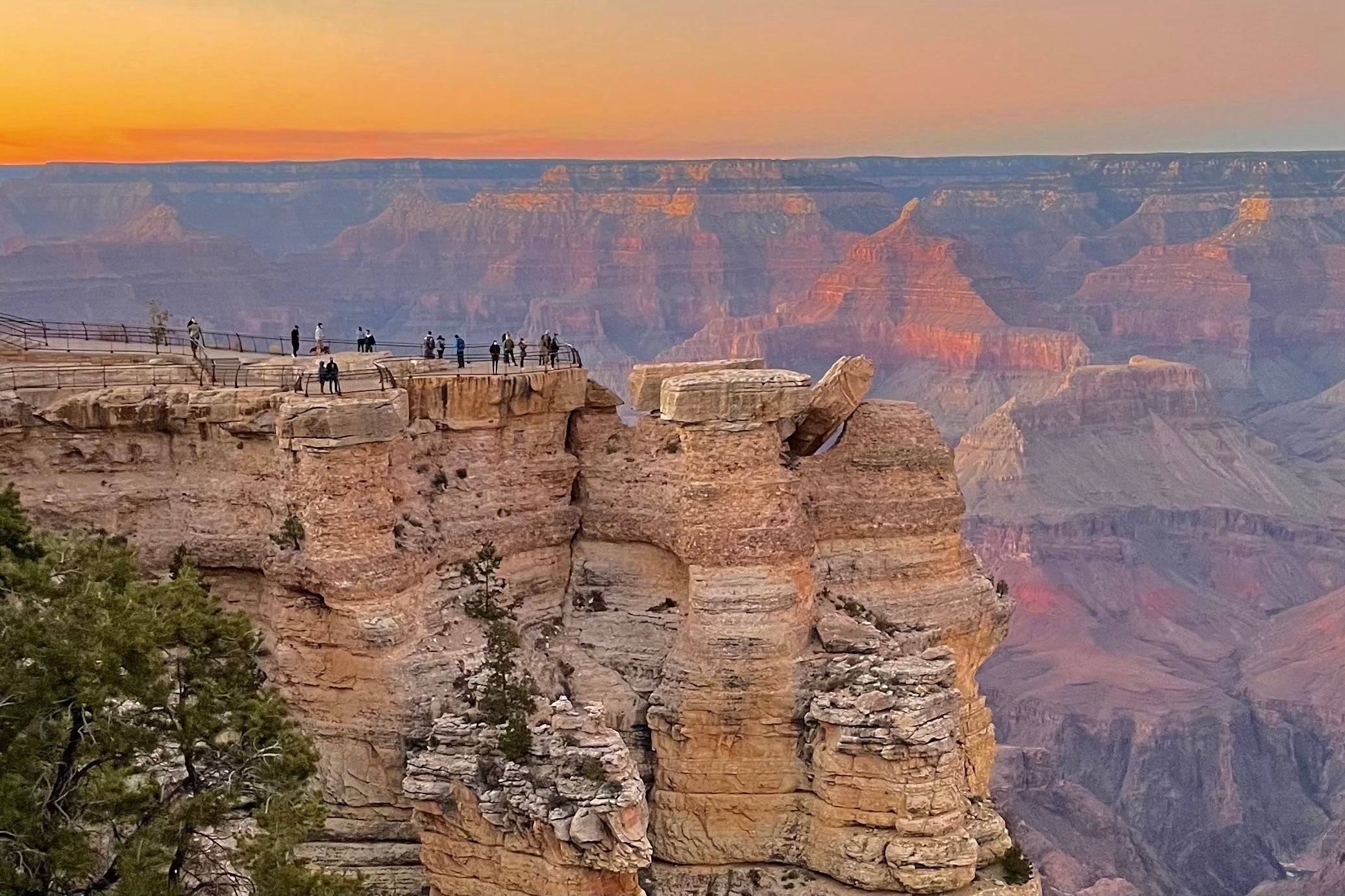 In celebration of National Park Week, which runs from April 16-24, The Points Guy is publishing a series of articles focusing on the beauty and diversity of America's national parks. We will share personal stories from the TPG team, as well as news and tips that will help you get the most out of your next national park visit.

America's National Park System covers more than 85 million acres of mountains, monuments, historic sites, canyons, recreation areas, waterways, shorelines and more. With that much space to explore, you'd think it would be simple to find the solace and solitude many of us are searching for when we visit a national park. It might not be that easy, though.

U.S. national parks see hundreds of millions of visitors each year. In 2021 – when numbers were still down from pre-pandemic years – the National Park System amassed nearly 298 million recreation visits.

That's a lot of people when you are searching for wide-open spaces in the great outdoors, but some parks are much busier than others. Great Smoky Mountains National Park saw the most visits with 14.1 million. At the other end of the spectrum, Aniakchak National Monument and Preserve in Alaska saw only 145.

If you aren't quite ready to visit a national park so remote that it can only be reached by air or boat and is often inaccessible due to unpredictable weather, you're going to have to figure out how to navigate the masses of people who plan to do the same.

Here are our top tips for navigating the country's busiest national parks.

Which national parks are the busiest?

Each year, the National Parks System releases statistics on visitation numbers. Based on the numbers, these were the 10 most visited national parks in 2021.

It should come as no surprise that national parks are busiest in the summer when the weather is nice and kids are out of school.

Joëlle Baird, a public affairs specialist for Grand Canyon National Park, told TPG, "The largest majority of visitation occurs from Memorial Day through Labor Day, with holiday weekends throughout the winter and spring also leading to increased visitation." According to Baird, "the best time to beat the crowds would be to travel in the spring and fall."

The caveat is that certain amenities and activities may be unavailable, so you'll need to plan accordingly. By October at Yellowstone National Park, campgrounds are closed for the season and snow starts to accumulate at higher elevations.

When you visit during shoulder season, there's less chance you'll be shoulder to shoulder with other outdoor enthusiasts.

Similar to visiting over the summer, national parks are busier on weekends and major holidays when many people are off work and looking for something to do.

In addition to major holidays, national parks have five "fee-free" days each year when guests can visit with no entrance free. These days are often busier, as well (though we wouldn't discourage you from taking advantage of this opportunity to experience the national parks).

No matter what day of the week you visit, you'll enjoy fewer crowds early in the morning or late in the afternoon.

Visit nearby national parks and monuments

If your national park visit spans multiple days, you may be able to avoid crowds by visiting your chosen national park on a weekday and hop over to a nearby, lesser-visited national park or monument on the weekend.

If a trip to Acadia National Park is on the agenda, you can get to Katahdin Woods and Waters National Monument in less than three hours. Katahdin Woods is a relatively new addition to the National Parks System and offers hiking, biking, skiing and more in the shadow of Mount Katahdin. Even closer is St. Croix Island, an international historic site in Calais, Maine.

At Grand Canyon National Park, you don't even need to leave the park to escape the crowds. Baird told TPG that "The North Rim, only open six months of the year, is also very popular and has far fewer visitors than the South Rim."

While planning your visit, reach out to the park or check a map for nearby parks and monuments that may be smaller, but just as beautiful and historic as popular national parks.

As a general rule, the farther and higher you go, the fewer people you'll encounter. The majority of national park visitors are going to stick close to the visitor centers and easy-to-access trails and activities.

Smoky Mountains National Park has a list of its most popular hiking trails, making it easy to figure out which trails you'd be better off avoiding during the busier days and months we already mentioned.

You can also reach out to the park or reference a mobile trail app like AllTrails to find lesser-explored trails.

Another option is to sign up for a National Park Service ranger-led hike or tour. Many of these limit the number of people per group so you'll naturally have fewer people around. Some ranger-led activities carry an extra fee and require reservations, but you can't put a price on solitude.

We don't mean the kind of physical flexibility needed for rock climbing. We're talking about not setting your plans in rock-solid stone – even if your plans involve clambering up a few.

Zion National Park, for instance, limits the number of people allowed into certain canyons each day for backpacking and canyoneering trips. It warns on its planning site that "your first and even second choices may be unavailable" when attempting to obtain a wilderness permit.

If you have your heart set on a particular one, you may need to choose multiple backup dates if your original plan doesn't pan out.

Hike in, camp out

If you don't mind roughing it, backcountry camping is a great way to avoid crowds. Hiking deeper into the park and staying overnight naturally distances you from crowds at the periphery of the park.

Most national park backcountry camping trips require a permit and whether you can reserve your permit ahead of time or pick it up day-of varies from park to park.

At Grand Tetons National Park, backcountry camping permits are issued on a first-come, first-served basis no more than one day prior to your trip (that flexibility rule comes into play here, as well).

There may also be other rules, including specific instructions or equipment to protect your gear from bears and other wildlife.

Plan ahead ... way ahead

As a general rule of thumb, you want to begin planning your national park trip about six months in advance. Whether or not you are planning permit-required activities, this will give you more than enough time to research the best time of year to visit and which lodging and activity options will be available to you.

Many campgrounds book up well in advance and advance reservations are strongly suggested. The LeConte Lodge, the only lodge inside Great Smoky Mountains National Park, is already booked for the 2022 season (though there is a waitlist).

Zion National Park strongly recommends visitors make reservations for their main campgrounds, Watchman Campground and South Campground. Reservations can only be made two weeks in advance. You will need to determine the first date you can make a reservation based on your travel dates so you don't miss out.

During peak times (typically May through September), Yosemite National Park requires reservations to even enter the park in order to manage congestion. Reservations can be made online up to seven days in advance and are taken almost immediately.

The saying, "Proper preparation prevents poor performance," comes to mind if a visit to one of the nation's busiest national parks is on your travel itinerary this year.

It might not be possible to escape the crowds entirely, but there are things you can do to increase your chances of decreased crowds.

Featured image by You can avoid the Grand Canyon crowds while still catching a great view. (Photo by Zach Honig/The Points Guy)
Editorial disclaimer: Opinions expressed here are the author’s alone, not those of any bank, credit card issuer, airline or hotel chain, and have not been reviewed, approved or otherwise endorsed by any of these entities.