St. Louis' MidAmerica Airport: The Ghost That Rose From the Dead

Articles
Max Prosperi is a part-time frequent flyer and travel writer and full-time student. Based in St. Louis, Missouri, Max covers a variety of topics with a focus on points, miles, and aviation.
Follow
Aug. 18, 2019
•
12 min read 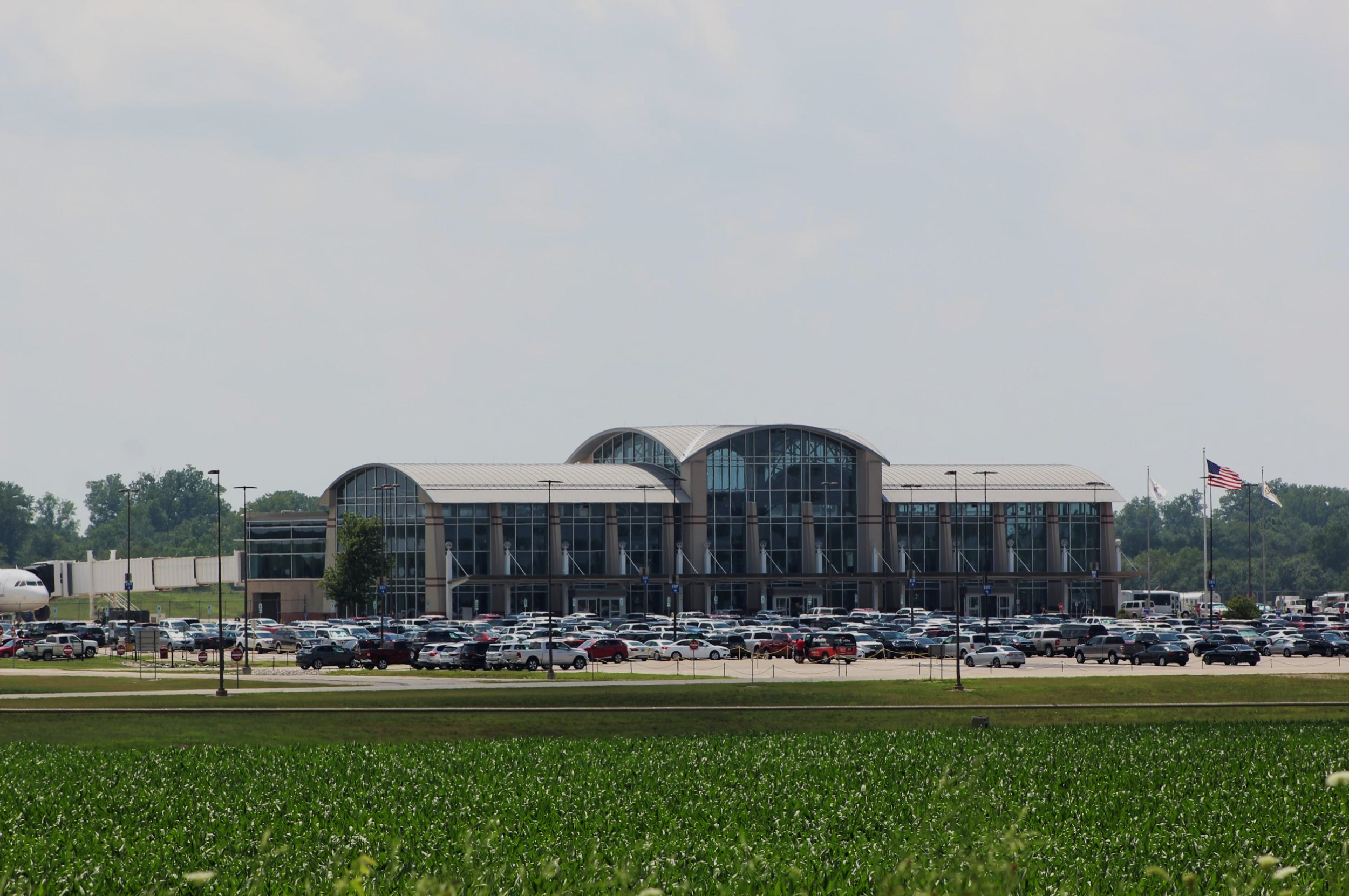 St. Louis' MidAmerica Airport: The Ghost That Rose From the Dead
This post contains references to products from one or more of our advertisers. We may receive compensation when you click on links to those products. Terms apply to the offers listed on this page. For an explanation of our Advertising Policy, visit this page.

In the late 1980s, St. Louis-Lambert International Airport (STL) was a booming passenger hub for Trans World Airlines, better known as TWA. In 1986, TWA had acquired Ozark Air Lines, a robust regional carrier based in St. Louis. TWA maintained much of Ozark's route network while expanding operations at STL. Then in 1993, TWA moved its own headquarters to St. Louis, with Lambert becoming the airline's main hub.

By 1994, St. Louis-Lambert International Airport saw over 23 million passengers pass through the airport's concourses. At the same time, the airport was looking to expand and added a second terminal, which opened in 1998. However, terminal space was just one of the problems facing St. Louis-Lambert International Airport. The airport, limited to two main runways, would often experience delays and congestion. With passenger growth expected to continue, the region needed a way to address these issues.

Unaware of what the coming decade would bring to air transportation in the region, officials spent $1.4 billion dollars to fix the problems at Lambert. On the Missouri-side of the Mississippi River, a brand-new runway was constructed. On the Illinois-side of the Mississippi River, roughly 25 miles from downtown St. Louis, a brand-new airport was built in Belleville, Illinois, near Scott Air Force Base. The new airport, known as MidAmerica-St. Louis Airport (BLV), came at a cost of $313 million (~$499 million in 2019).

MidAmerica-St. Louis Airport opened its doors to passengers in 1997. But upon opening the new facility, which featured a state-of-the-art passenger terminal capable of handling the Boeing 747, there was not a single airline operating flights at the airport. Meanwhile, on the Missouri side of the Mississippi River, Lambert continued to bask in the glory of TWA, with passenger numbers increasing.

With St. Louis no longer a major airline hub and passenger growth stagnant, congestion was also no longer an issue. Local media criticized the airport's decision to add a fourth runway. Meanwhile, at MidAmerica Airport, the pristine passenger terminal recorded just 176,548 passengers from 2005 to 2010 — an average of just under 35,000 passengers per year.

The MidAmerica Airport was considered a failure, costing the region millions each year while continuing to operate. The airport was barren, staffed with few employees as the air conditioning continued to cool the empty passenger terminal.

Amateur footage shot at the airport in 2010 on the busiest travel day of the year that shows just how eerie the airport had become.

For years, MidAmerica Airport intrigued readers and viewers — and not just those in the St. Louis region. The airport was featured in numerous publications and nightly news programs in the years following its grand opening, including Tom Brokaw's "Fleecing of America," multiple NBC Nightly News reports, and in Kevin Tibbles' "The Glass Palace on The Prairie."

In recent years, things have changed at MidAmerica Airport. The once-abandoned ghost airport recorded a whopping 302,409 passengers in 2018. Additionally, the airport will soon be linked directly to the St. Louis area's light-rail system, MetroLink. This light-rail expansion project will link the terminal with the St. Louis metro area.

The airport is connected to nine other airports in the US with passenger service provided seven days a week by ultra-low-cost carrier Allegiant Air. The airline resumed passenger service to the airport in 2012, with nonstop service to Orlando-Sanford Airport (SFB). Today, Allegiant serves numerous leisure destinations including Las Vegas; Fort Lauderdale; Punta Gorda, Florida; and Myrtle Beach, South Carolina. Since 2012, the airport has recorded a more than 7,000% increase in annual passenger traffic, from 3,830 passengers in 2012 to 2018's 302,409.

I recently visited MidAmerica Airport to see what the once-abandoned passenger terminal looked like during the peak summer travel season. After over two decades of hemorrhaging taxpayer money, it would appear the airport may finally have found its niche, catering exclusively to leisure travelers.

The airport is located off of Highway 64 (colloquially referred to as Highway 40 by locals). It's easy to miss. For miles in either direction, cornfields line the highway. Located 25 miles outside of Downtown St. Louis, the airport is a 35-minute drive into the heartland.

The passengers terminal is an anomaly in the area. It sits across the highway across from a cornfield, gas station, and small Best Western-roadside hotel. The modern terminal almost appears to be a mirage.

In the distance, two massive military aircraft were completing a series of touch-and-go's at the airport. The aircraft was a set of 50-year-old KC-135 Stratotankers based at Scott Air Force Base, located on the other side of the airfield.

MidAmerica Airport sees the majority of its flights in the afternoon and early evening on Thursdays, the day I made my visit. There was one flight scheduled to depart in the early afternoon: a flight to Punta Gorda, Florida. The arriving flight from Jacksonville was still en route when I arrived.

While original plans called for expansion of the passenger terminal, it remains untouched for the most part. The day of my visit passengers were lined up at the ticketing desks, checking their bags and receiving their boarding passes.

There was a priority lane for passengers who paid for the relatively inexpensive add-on offered by Allegiant. Unsurprisingly, as most of the travelers headed to Punta Gorda were likely flying Allegiant for the airline's dirt-cheap fares, it went unused during my visit to the airport.

On the side opposite passenger ticketing, there were a dozen or so passengers waiting for their departing flight or awaiting arriving passengers from Jacksonville. With upward of 70 passengers and employees landside, the terminal was bustling by MidAmerica Airport standards.

The passenger terminal features two baggage claim belts, both of which went unused during my visit.

I made my way up to the passenger walkway to security. The small TSA screening checkpoint was somewhat busy with passengers heading to their departure gate. To my surprise, the TSA checkpoint featured a dedicated TSA PreCheck lane. Beyond security are four gates, two of which feature passenger jet-bridges.

By the time I had cased the entire passenger terminal, the inbound flight was on final approach. I made my way outside the terminal and into the scorching Midwestern summer heat.

The inbound flight, operated with an Airbus A320, arrived on time. The ultra-low-cost carrier operates a relatively young fleet of Airbus A320 and A319s and recently phased out its fleet of ancient McDonnell-Douglas MD-80 aircraft. The MidAmerica Airport sees the Airbus A320 on a daily basis, something unique for an airport of this size.

On my way back to the highway, there was a steady flow of vehicles en route to the terminal. While certainly not as busy as St. Louis-Lambert Airport, the airport was by no means dead, a far cry from just a few years ago.

The Future of MidAmerica/St. Louis Airport

For now, at least, MidAmerica Airport is alive and well. The once-abandoned ghost airport has risen from the dead. Additionally, local leaders appear to see long-term potential at the airport, recently approving light-rail service. However, the multimillion-dollar expansion project to St. Louis' little-known second airport could very well end up just like the terminal: the subject of harsh criticism.