A business card for regular Southwest flyers: A review of the Rapid Rewards Premier Business card 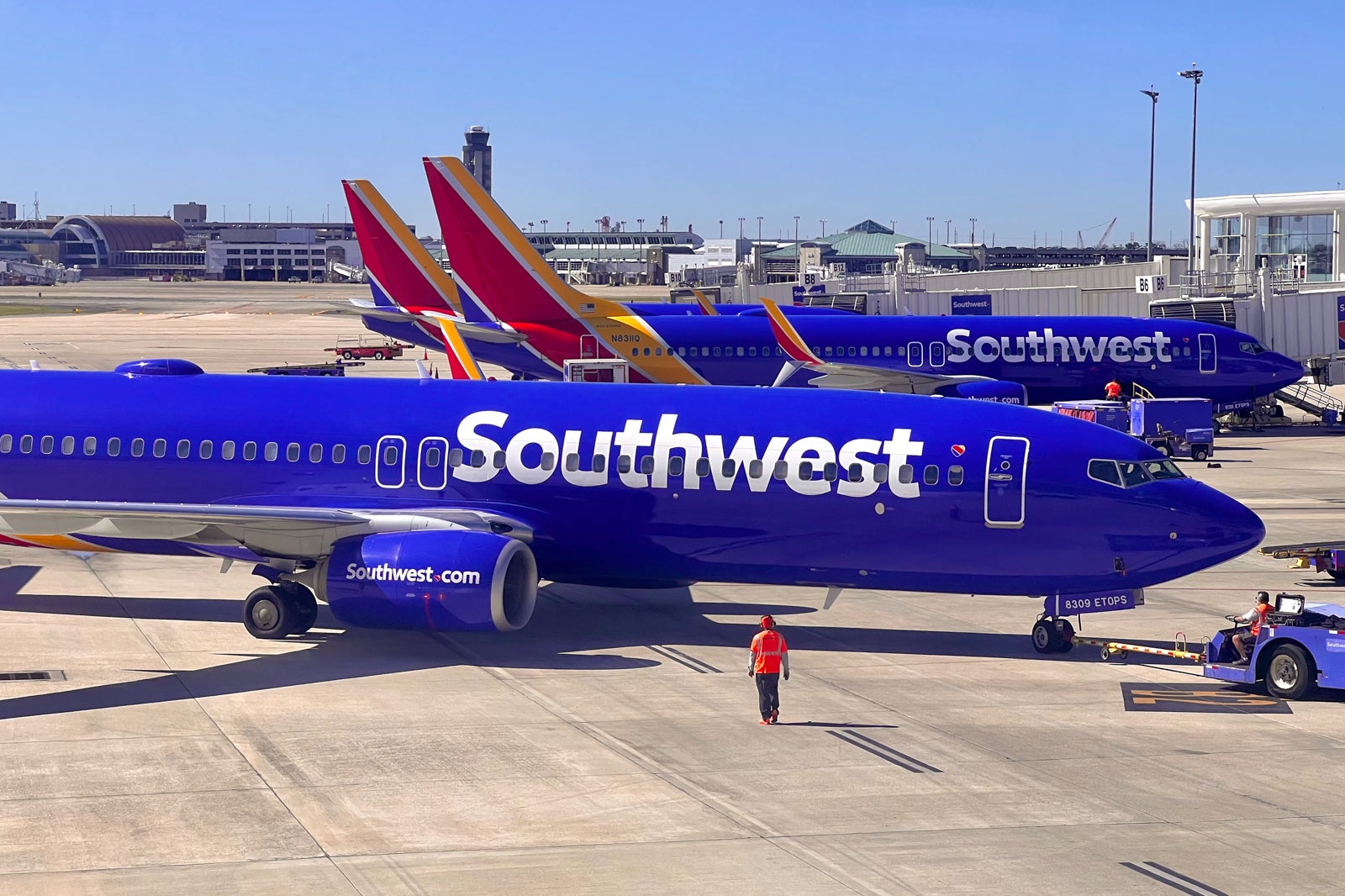 Airline-specific credit cards are often not the first picks for travel credit cards, since they usually feature fewer benefits that are limited to a specific airline. But the Southwest Rapid Rewards Premier Business Credit Card can be a fair choice for small business owners with its lower annual fee and appealing bonus categories that allow you to earn points on nearly all of your expenses.

In addition, the card’s current welcome offer can be a strategic play toward earning the coveted Southwest Companion Pass.

Here's what you need to know if you're considering the Southwest Premier Business card for your company.

Who is the Southwest Premier Business card for?

In particular, business owners who are hoping to hit A-List status or earn a Companion Pass without a hefty annual fee should consider this card. The Companion Pass allows a companion to accompany you on a trip for (almost) free — you will only pay taxes and fees on your companion’s ticket, which start at $5.60 each way. At just $99 a year, the card features many benefits like automatic anniversary points, complimentary additional employee cards and an annual $500 fee credit for points transfer.

Both the Southwest Premier Business card and Southwest Performance Business card are reserved for small business owners. Southwest cards are issued by Chase, which is known to be on the stricter side of what they determine as a small business. The Premier card is a quality option for business owners who fly Southwest somewhat regularly, but those who are frequent flyers on the airline will likely benefit more from the Performance card, which features higher earning rates and more perks.

New cardholders can earn 60,000 bonus Southwest Rapid Rewards points after spending $3,000 on purchases within the first three months of account opening. This offer is worth up to $900, according to TPG’s valuations. This is a substantial sign-up offer, especially for a card with a $99 annual fee.

Remember too that sign-up bonuses from Southwest cards count toward Companion Pass qualification. This means that if you sign up for the Premier card and meet the spending requirement of $3,000, you will have at least 63,000 points toward the Companion Pass. To earn one outright, a traveler must fly at least 100 qualifying one-way flights in a calendar year or earn 125,000 qualifying points in a calendar year. The Premier card’s sign-up bonus (plus the points earned from reaching the minimum spending requirement) will put you over halfway there.

The Companion Pass, once earned, is valid for the remainder of the year and the following year, so earning it as early into the year as possible will help you receive the maximum benefit of the pass.

Just bear in mind that Southwest cards are subject to Chase’s 5/24 rule, meaning you will likely not be approved if you have opened five or more credit cards within the last 24 months (across all issuers). But the Premier card itself will not count against your 5/24 limit, since small-business cards do not appear on personal credit reports.

Related: Want to open a new Chase card? Here’s how to calculate your 5/24 standing

The Southwest Premier Business card has a $99 annual fee, but it offers a fair share of perks that can make it a worthwhile card for occasional Southwest flyers.

Two Early Bird Check-Ins each year: Southwest does not assign seating but instead allows flyers to check in 24 hours before the flight to obtain their boarding position. The earlier you check in, the better the chances of snagging your preferred seat when you board. The Early Bird perk automatically checks you in 36 hours before your flight, 12 hours prior to flyers without the perk — and you'll enjoy this perk twice per year with the card.

Status Boost: You will earn 1,500 Tier Qualifying Points (TQPs) per $10,000 spent on the Premier card in a year. This can help you earn A-List or A-List Preferred status faster.

$500 fee credit for point transfers: Southwest will cover up to $500 in fees associated with point transfers each year. Transferring Rapid Rewards points to another member typically costs $10 per 1,000 points transferred, so you can transfer up to 50,000 points every year without paying additional fees (after Southwest’s reimbursement).

Southwest also provides benefits to all of its flyers, independent of whether they hold a credit card with the airline or not. These benefits include two free checked bags with every flight, no change fees (flyers do pay any applicable fare difference between the previous and current ticket) and free cancellations — though some tickets are nonrefundable and will be returned as flight credit.

Related: Southwest’s new fare type is here. What to know about ‘Wanna Get Away Plus’

As stated above, for every $10,000 spent on the card within a calendar year, you will earn 1,500 Tier Qualifying Points (TQPs). There is no limit on the amount of TQPs you can earn — so you could (theoretically) spend your way to Southwest elite status without ever setting foot on a plane.

How to redeem Southwest points

The primary redemption option for Rapid Rewards points is Southwest-operated flights. Southwest follows a simple redemption process: The more expensive a flight is in cash, the more it will cost in points. There's no outsized value to be had, but that ensures you're getting relatively consistent value for your rewards.

Redeeming Southwest points is as simple as booking Southwest flights online. Choose “points” instead of “dollars” when selecting the flight you want to book on the carrier's website. You'll then see the award pricing for your itinerary.

Like all airlines' award tickets, flights booked with Southwest points will still require payment for additional taxes and fees, which start at $5.60 per way. However, tickets booked with points are fully refundable, and there is no penalty for cancellations (as long as you do it at least 10 minutes before your scheduled departure time).

The airline also offers international flights, hotels and car rentals on its travel portal, but the rates are subpar when compared to using your points on Southwest-operated flights.

Which cards compete with the Southwest Premier Business card?

It also offers a higher welcome offer. New cardholders can earn 80,000 bonus points after spending $5,000 on purchases within your first three months of account opening — or 20,000 points higher than the Premier Business card.

Another option would be the Ink Business Preferred Credit Card, which is currently offering a sign-up bonus of 100,000 Ultimate Rewards points after you spend $15,000 on purchases in the first three months after account opening. This bonus is worth a whopping $2,000 based on TPG's valuation, and you can transfer those points to Southwest or use them for travel directly through Chase for a value of 1.25 cents per point.

The card also offers 3 points per dollar spent on up to $150,000 in combined purchases on shipping, internet, cable and phone services, advertising purchases with social media sites and search engines, and travel.

You do sacrifice the Southwest-specific perks you'd get on either the Premier or the Performance card, but you'll get much more flexibility for your rewards in return.

Read more: How to maximize your rewards earning with the Ink Business Preferred

For frequent business flyers, the Performance card may be a more beneficial option, while those who want more flexible points may enjoy the Ink Business Preferred. However, those who aren't able to make the most of the Southwest-related benefits but still want some perks for a lower annual fee may opt for the Premier card.

The Southwest Rapid Rewards Premier Business Credit Card is a good option for a loyal Southwest flyer but, for the majority, there are better business cards with more value and flexibility. Frequent Southwest flyers who want to achieve A-List status or qualify for the Companion Pass would benefit more from the Performance Business card. For those looking for more flexible redemption options, a card like the Ink Business Preferred Credit Card may be better, as it allows you to have access to all of Chase’s transfer partners.

Regardless of its limitations, the Premier Business card can be a good fit for certain business owners. When compared to other travel cards, a $99 annual fee is a deal, especially when factoring in the 6,000 bonus anniversary points. The card also allows you to work toward the Companion Pass and A-List status, which can be a great perk if your primary airline is Southwest.

Related stories
American Airlines is about to open a hotel — but you won't be able to book a room there
Why this is the easiest time of the year to earn 5 points per dollar spent
Legislation that could gut credit card rewards set to move through Congress
Would you stay at 1 of these 8 haunted hotels this Halloween?
Featured image by (Photo by Zach Griff/The Points Guy)
Editorial disclaimer: Opinions expressed here are the author’s alone, not those of any bank, credit card issuer, airline or hotel chain, and have not been reviewed, approved or otherwise endorsed by any of these entities.

Our points-obsessed staff uses a plethora of credit cards on a daily basis. If anyone on our team wouldn’t recommend it to a friend or a family member, we wouldn’t recommend it on The Points Guy either. Our opinions are our own, and have not been reviewed, approved, or endorsed by our advertising partners.
See all best card offers
Related stories
News
American Airlines is about to open a hotel — but you won't be able to book a room there
News
Why this is the easiest time of the year to earn 5 points per dollar spent
News
Legislation that could gut credit card rewards set to move through Congress
News
Would you stay at 1 of these 8 haunted hotels this Halloween?