Articles
Summer Hull , aka Mommy Points, ran the Mommy Points site for families who want to travel more for less using miles and points for seven years. She now heads up a variety of special projects at TPG when she isn't exploring the world with her own two girls.
Follow
March 30, 2019
•
10 min read 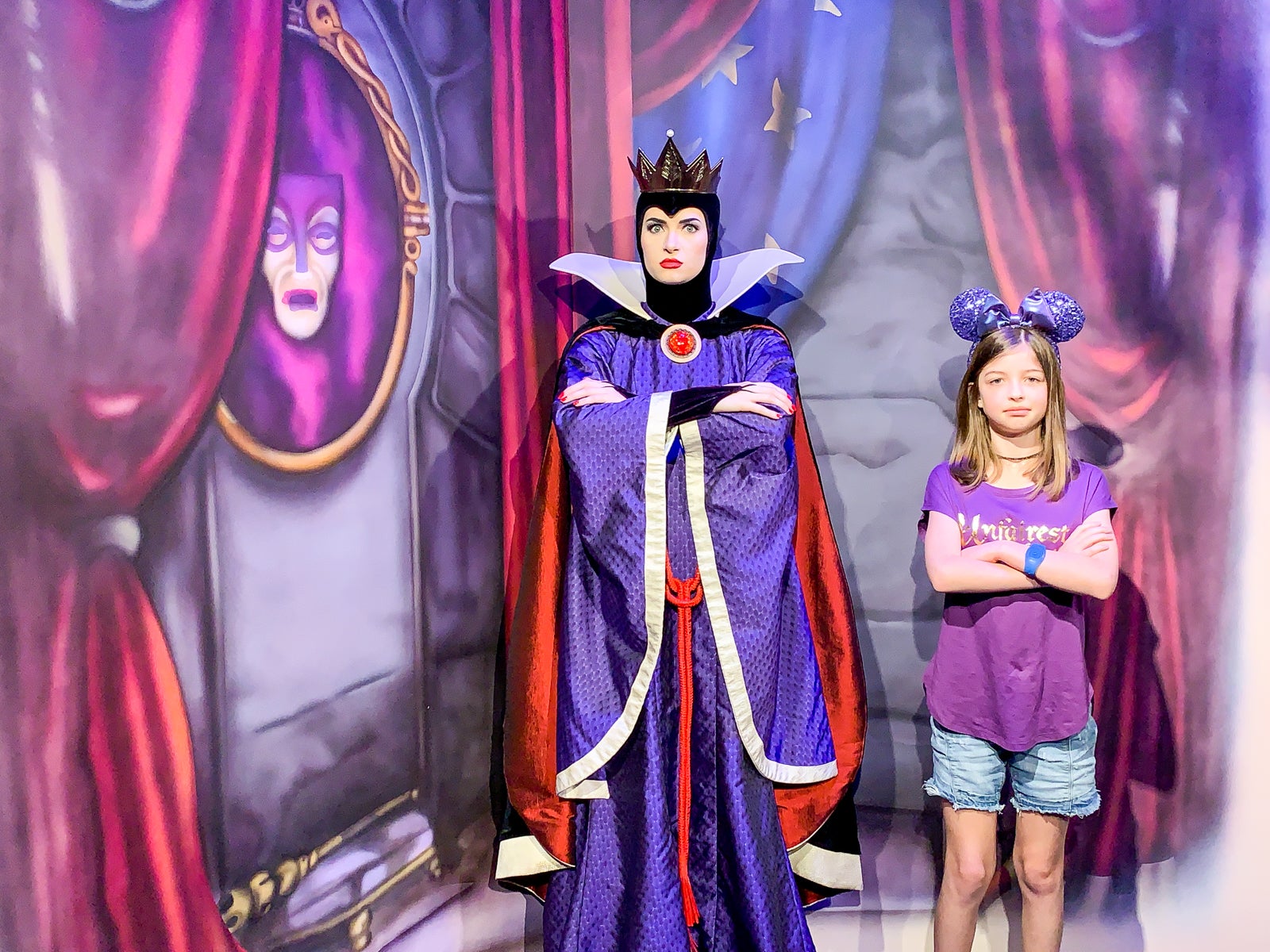 Newest Character Meal at Disney World: Dinner With Snow White and Evil Queen at Artist Point
This post contains references to products from one or more of our advertisers. We may receive compensation when you click on links to those products. Terms apply to the offers listed on this page. For an explanation of our Advertising Policy, visit this page.

Disney World's newest character meal is an outside-the-park dining experience nestled within Disney's forested Wilderness Lodge Resort called Storybook Dining at Artist Point that serves up equal portions of sugary sweetness and Evil Queen wickedness. It is a recipe for family fun -- even if it does include a touch of "poison apple."

Storybook Dining at Artist Point opened as a reimagined Snow White-themed meal in December 2018 and quickly became one of the hottest dining reservations at Disney. We snagged a reservation for our spring break visit when bookings first opened and, in the process, experienced one of my favorite memories of the trip courtesy of the Evil Queen.

First, let's talk about the food.

Dinner isn't cheap at $55+ per adult and $33+ for children 3-9 years old. For that price, you get a full three-course meal with a side of entertainment. Here are ways to save on all things Disney, including dining.

Our dinner was set in a small space at Wilderness Lodge with "enchanted" trees and lights all around. Dinner in this setting feels much more intimate than, say, somewhere as loud and massive as Chef Mickey's. The vibe was quaint and happy -- almost like we were in a cartoon-ish cottage in Germany.

You start your meal at Artist Point with the two hardest decisions of the night by flipping through the Storybook menu to determine which drink and which main course to order.

Drinks here are really, really good and well-themed, so don't skip them. A featured drink is around $12, if you are paying cash, but is included with the Disney Dining Plan.

There are fun drinks for the kids such as Transformation Potion that takes basic lemonade and "transforms" it to a potion when you add the blue (sugary) potion to the mix. That one will set you back $5, but the kids will have a blast mixing it together.

Next, are shared appetizers that are a part of the three-course menu: winter squash bisque, hunter's pie (chicken, black truffle, stone fruit preserve) and a wicked shrimp cocktail. They are served on a sprawling, leafy Lazy Susan shaped like a tree. Its branches crowd the table a touch, but it is pretty cute.

You don't pick one appetizer at Artist Point, you get all three and there is plenty for all, except the shrimp cocktail was a bit limited considering it was a shared appetizer. The lighter option was a nice touch mixed into the selections, but felt a little like "one of these things is not like the others."

Kids will get fruit, veggies, cheese, and a "create your own butter" as their first round. As with most things Disney, it's the details that make this awesome. The child appetizers are served in what looks like a miner's bucket, which totally fits with the dwarf theme. The "dirt" in the bucket also tastes delicious, but it was the tiny roll served in a small pot that had my kids begging for seconds (which was happily provided).

The soup portion of the adult appetizer was served in a cauldron and was fun to stir with the caramel lollipop. Honestly, all of the appetizers were pretty good and a far cry from theme park chicken fingers and french fries.

It was hard to decide on a main course as there were multiple tempting choices. You can pick from a Royal Prime Rib Roast, Brothers Grimm Roasted Chicken, Magic Mirror Slow-Braised Veal Shank, a Seafood Stew, Bashful’s Butter-Poached Snapper and A Stroll Through Nature that featured butternut squash, arugula and gnocchi.

We had eaten a lot of food on this trip, so I went for the Stroll Through Nature, which was truly decadent (even my kids loved their bites). While it was delicious, it was certainly not a "light choice" as I intended when I saw words like squash and arugula. There was lots of cheese and cream and richness all around. Here are tips for eating healthy at Disney, if that's your goal.

My husband wasn't pretending to go for healthy or light and opted for the rib roast with horseradish mashed potatoes. He gave it two thumbs-up.

Kids get to pick from a kid version of the prime roast, pasta with cream or red sauce, vegetarian steam buns, grilled chicken or the old standby: chicken tenders.

During the meal, characters are milling about, sometimes dancing and clapping with music. Snow White, Grumpy and Dopey made the rounds as we all sang "It's Off to Work We Go."

Those three characters come by your table at some point during the meal and will pose for a photo or sign autographs if you wish.

However, they are hardly the stars of the meal. (No offense, Snow White.)

The star of the meal cannot be bothered to come to you. If you want to meet the Evil Queen, you have get up from your table and line up to see her.

My 9-year-old humors me with occasionally meeting Disney characters with her younger sister, but she is pretty much over it. However, she wanted to meet the Evil Queen. When the queen complemented her choice of wearing purple and beckoned her to follow, my tween was all in.

She posed with the queen, made "evil" faces with her and walked away with one of the key memories of the trip. My 3-year-old was all about Snow White, and wanted nothing to do with this evil encounter, that is, until her older sister came back to the table gushing about how cool the queen was.

My littlest then tried to be brave, but upon seeing the queen in all her glory, she got cold feet -- but decided to push through with a little help. Bottom line: Tweens think the queen is cool, preschoolers, not so much.

The dessert trio was made up of a “Poison” Apple, Fairy Tale Gooseberry Pie and a spongecake with chocolate "gems" and buttercream icing called Miner’s Treasures.

We certainly didn't need all of those desserts, but it was fun to pick at them and decide our favorite. Our tween liked the poison apple with the white chocolate apple mousse, but it wasn't the adults' favorite at all.

We found the spongecake and pie to be worth a few bites, but desserts were probably our least favorite of the three courses and none were standouts for us.

Finally, you'll get the Hunter’s Gift to the Queen, which is comprised of cracked maple popcorn and ganache heart served from a smoking box. We did not bother to eat much of this dessert, but the presentation was five-star.

Disney is all about the details, and the details are rich at this new character experience. From the storybook-themed courses and poison apple place settings, to the trees on the ceiling, Disney's Storybook Dining at Artist Point lives up to the hype.

The three more traditional characters were fun and appreciated by my youngest daughter, but meeting the queen is what pushed this meal over the top. She owned her role, had a great backdrop for pictures and was a wickedly fun departure from the sweet and sugary side of Disney.

We didn't love every single item served, but we at least liked most of them. You could easily pass on a few items and still leave more than satisfied since portions were so plentiful. Storybook Dining at Artist Point isn't somewhere we will eat on every single Disney trip, but if you are looking for a somewhat different side of Disney, this is a meal worth experiencing (just be sure to make reservations 180 days in advance).

All images by author.