7 Native American-owned hotels for your next getaway

Articles
Terry Ward is a Florida-based freelance writer who travels the world with her two young children while contributing to The Points Guy Family, in addition to many other outlets. She has lived in France and New Zealand and has a particular passion for Norway. terry-ward.com
Follow
Nov. 09, 2022
•
9 min read 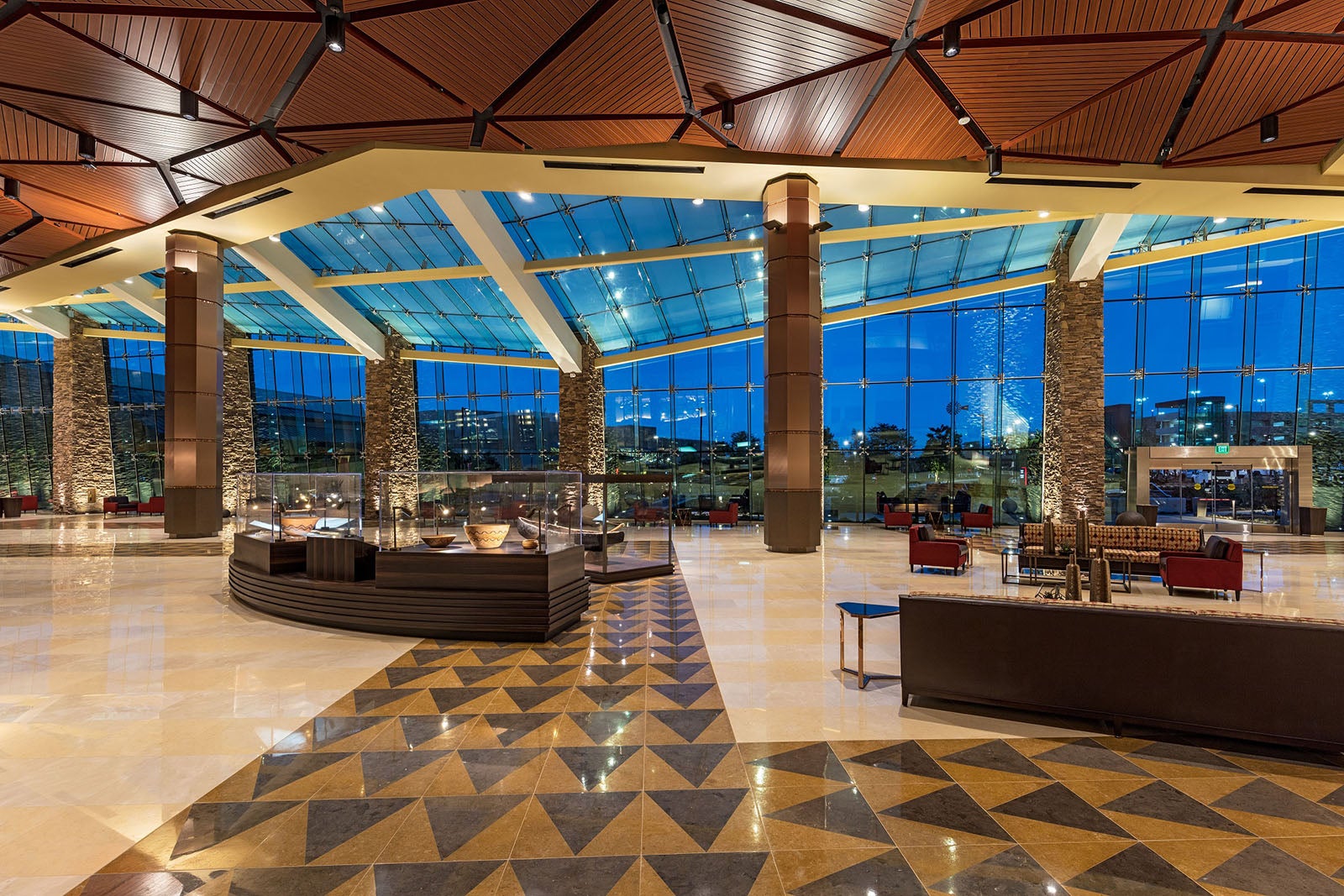 From coast to coast in the United States there are incredible hotels and resorts owned by Indigenous people where you can spend your next vacation. These locations go beyond those found near National Parks and areas of pristine wilderness, from the Seminole Tribe in South Florida to the Iñupiat people of Alaska’s Arctic region, and many tribes and communities in between. These properties owned and managed by indigenous people across America are as diverse as the communities themselves.

Come for the hospitality, the cultural education and a memorable vacation — this Native American Heritage month, or any month.

The Seminole Tribe of Florida made modern hospitality history in 2006 when it acquired Hard Rock International for just under a billion dollars, marking one of the largest purchases ever by a Native American tribe.

Among the hotels the tribe owns and operates today is the Seminole Hard Rock Hotel & Casino in Hollywood, Florida, which underwent $1.5 billion in renovations in 2019. The construction included the Guitar Hotel, shaped like the stringed instrument, where live music and light shows are regularly on tap.

The property has over 1,200 guest rooms, an on-site casino and a sprawling spa where you can unwind with an indulgent treatment. And while the resort is not on the beach, it’s done a good job of creating a watery playground along an expanse that stretches the length of three football fields where you can paddleboard, canoe and swim in a lagoon surrounded by cascading waterfalls and palms.

Those attractions include the best place to stay at the canyon’s west entrance, the Cabins at Grand Canyon West, and a collection of cozy and rustic cabins within reach of all the beauty of the West Rim.

Some of the cabins can sleep up to six people and all have porches where you can breathe in fresh air while soaking in the views. Spend your days floating down the Colorado River or checking out the Skywalk — a glass bridge that extends 70 feet out over the canyon — before returning to your cabin to relax under the starry night skies.

The Hualapai Tribe also owns Hualapai Lodge, another great base for exploring the western entrance of the Grand Canyon from the hotel’s location along the longest remaining stretch of historic Route 66.

The only Native American-owned hotel property in the downtown portion of Santa Fe, Hotel Santa Fe is majority-owned by the Picuris Pueblo of New Mexico’s Sangre de Christo Mountains.

The hotel is not located on sovereign lands but rather in the heart of the city. The tribe chose to build its resort here — instead of on the reservation — seeking to appeal to visitors as a meeting venue that has close ties to Native culture.

The on-site restaurant, Amaya, incorporates Native food and ingredients (including bison and Pueblo cuisine) and offers guests a private seasonal dining experience in a teepee. All of the hotel’s hallways and rooms showcase Native American art from the tribe’s multimillion-dollar collection.

Make time for an energy work treatment at the hotel’s spa, which incorporates ingredients like white sage and wild pinon sap into therapies.

Top of the World Hotel, Alaska

If you want to experience the intersection of Arctic wonders and indigenous cultural learnings, there’s no place like the Top of the World Hotel in Utqiagvik, Alaska (the town formerly known as Barrow). A non-profit organization representing roughly 13,000 Iñupiat Alaska Native shareholders owns this remote property in the northernmost city of the United States.

In addition to meeting the local Iñupiat people and learning about their culture through drumming performances, hunting stories and other experiences, you can go on tours of the North Slope and might even get to see the northern lights and polar bears in this very special place.

The hotel itself is simple, clean and comfortable. You’re really here for the incredible nature just outside the door and the opportunity to learn from the people who know this land best.

Few Pacific Northwest lodges mix ease of access from a major city (Seattle is just 30 minutes away) with the wilderness that awaits guests at the Salish Lodge & Spa, a spectacular indigenous-owned property in Snoqualmie, Washington. (You might recognize it from the early 1990s TV series "Twin Peaks.")

Owned by the Snoqualmie Indian Tribe, the property has guest rooms that feel like true retreats; each has a gas fireplace, lavender and mint bath amenities, a copper kettle and pour-over coffee service, and a pillow menu to secure your best night’s sleep.

The scents of cedar and eucalyptus permeate the property’s award-winning timber and glass spa, with soaking pools, saunas and steam rooms that might make you want to extend your vacation.

At the edge of the Tongass National Forest in Ketchikan, Alaska, the Alaska Native-owned Cape Fox Lodge is a sublime base for exploring Southeast Alaska in a deeper way than passing through on a cruise ship typically allows.

The hotel has a vast collection of Native artworks and artifacts on display; all rooms have either sea or mountain views and are spread across the main lodge and three detached lodges. The Tlingit tradition of hospitality is alive in the hotel’s main restaurant, where you can dig into Alaskan king crab and halibut as well as reindeer sausage and bison dishes.

Spend your days around Ketchikan touring nearby totem parks, scouting for wildlife or heading out on a fishing charter in the salmon capital of the world.

The Pechanga Band of Luiseño Indians owns and operates this 1,100-room resort that has one of the largest casino floors in California with 200,000 square feet of gaming offering more than 5,000 slot machines and 152 table games.

Near the Temecula Valley Wine Country, roughly an hour’s drive from San Diego and 90 minutes from Los Angeles, the Pechanga Resort Casino nods to its Native heritage throughout, from the cultural installations in the hotel’s lobby (grab a brochure from the concierge desk for a self-guided tour of each piece) to native botanicals incorporated into treatments in the property’s luxurious spa.

Even the resort’s on-site championship golf course nods to Native American history. At hole five along the gorgeous, links-style course that winds through natural canyons, you can see native Kichaa (homes) and a giant boulder with pockmarks worn into it from where Pechanga women once ground acorns for family meals.

For a more intimate stay five minutes from the main resort, sister property Temecula Creek Inn has just 127 rooms and an on-site vegetable and herb garden that’s a delight to tour.

Related stories
Great deal: Book business class tickets at premium economy prices with this Avianca LifeMiles sale
Holiday gift guide: TPG’s 22 travel-friendly picks for 2022
Vail Resorts lift-ticket sales capped; buy your Epic Pass by Dec. 4
These Black Friday hotel deals can save you hundreds on your next stay
Featured image by PECHANGA RESORT CASINO
Editorial disclaimer: Opinions expressed here are the author’s alone, not those of any bank, credit card issuer, airline or hotel chain, and have not been reviewed, approved or otherwise endorsed by any of these entities.