How to get from Las Vegas to the Grand Canyon 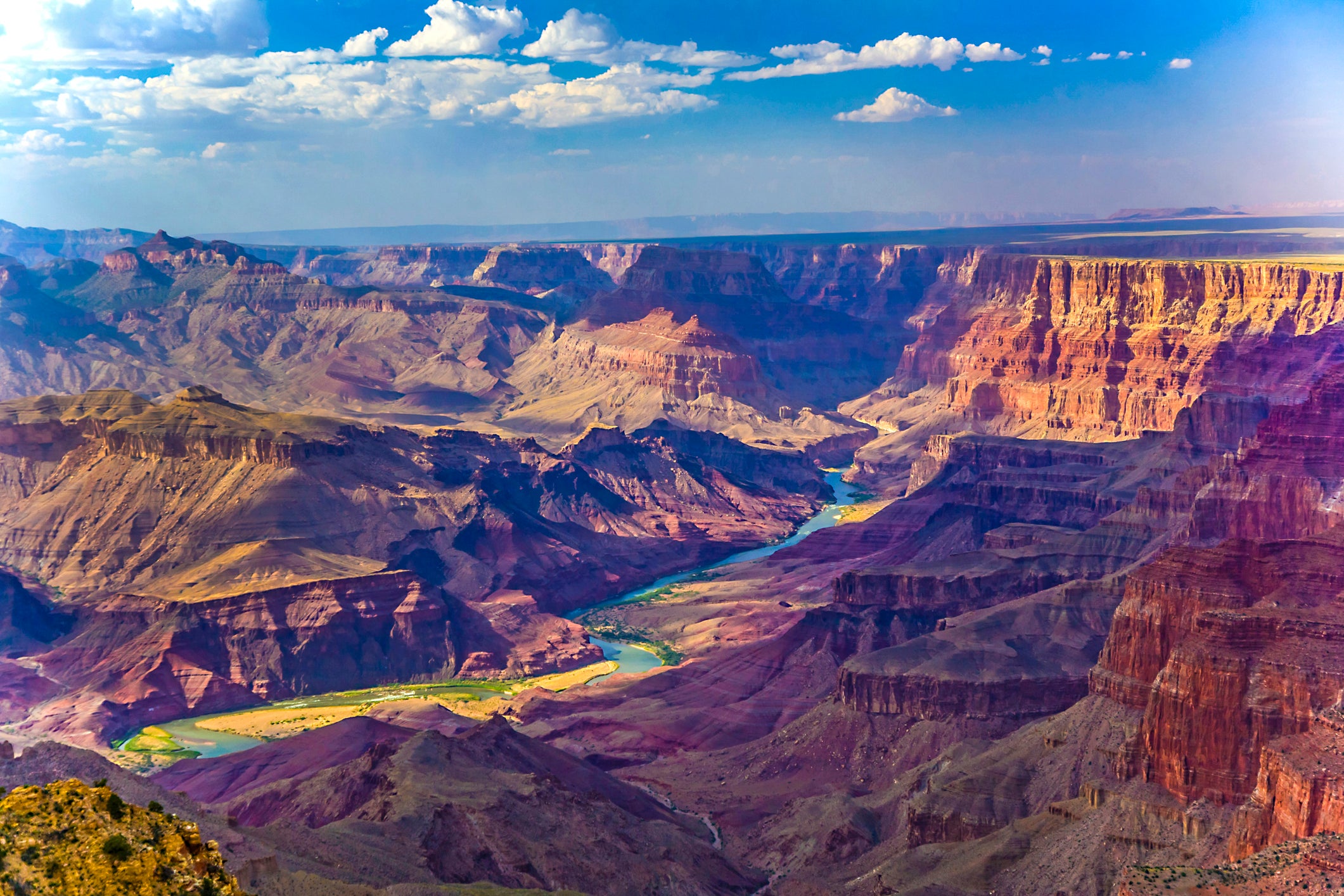 One of the world's natural wonders and a bucket list item for many travelers, the Grand Canyon is a popular day trip or multi-day adventure from Las Vegas. In fact, more than 6 million people annually visit Grand Canyon National Park in Arizona, which is just a few hours by car from the bright lights of the Vegas Strip.

Today, let's look at all the ways to get from Las Vegas to the Grand Canyon and the modes of transportation that may work best for you.

Embark on a road trip

Las Vegas McCarran International Airport (LAS) has a Rent-A-Car Center that houses 11 rental companies under one roof. Since the Las Vegas Strip (where the majority of visitors stay) is less than a 10-minute Uber or Lyft ride from the airport, it's easy to rent a vehicle conveniently and affordably just before taking off for the Grand Canyon.

Make sure you book your rental car with a credit card that provides a collision damage waiver (CDW) and other protections to cover the rental car (and yourself) if you’re in an accident or if the vehicle is stolen or damaged.

Related: Getting to Las Vegas on points and miles

The drive from Las Vegas to the Grand Canyon's iconic South Rim -- the most-visited section due to its superior canyon viewpoints and accessibility -- is approximately 275 miles from the Las Vegas Strip and takes around 4.5 hours.

If you're short on time and simply want a glimpse of the Grand Canyon, the West Rim is only a two-hour drive from Las Vegas and offers an adrenaline-filled zip line and Skywalk experience. But you won't be awarded the same staggering views as the South Rim from Grand Canyon National Park, the only section of the park open year-round.

To reach the South Rim from Las Vegas, take Highway 93 south to I-40. From there, get on I-40 east to Route 64. Then jump on Route 64 north and you'll arrive directly at the South Rim in approximately one hour.

A more scenic alternative, albeit a bit longer drive, is to take I-515 south from downtown Las Vegas to US-93 southbound. Exit US-93 to visit the Hoover Dam if time permits and then jump back on US-93 heading east while crossing over the Colorado River and getting on I-40 to continue to the South Rim.

The freedom afforded by having your own car means you can decide what highlights to hit, where to stop and how long to stay on your visit to the Grand Canyon.

Flying directly to the Grand Canyon from Las Vegas on a commercial airline is complicated. The closest commercial airport is Flagstaff Pulliam Airport (FLG) but as a commuter airport, you won't find direct service from LAS airport. Instead, you would have to fly from LAS into Phoenix Sky Harbor International Airport (PHX) and take an expensive connecting flight to Flagstaff. You'd then drive 90 minutes to the South Rim of the Grand Canyon.

Experiencing the Grand Canyon from this bird’s-eye perspective on a privately chartered airplane is certainly more costly than driving. However, if time is of the essence, flying affords you more time at the South Rim plus astounding aerial views.

Soar over the most beautiful landscapes at Grand Canyon National Park like a VIP in a helicopter. Companies such as Papillon Helicopters and Maverick Helicopters offer tours that depart from a helicopter air terminal near LAS Airport. Tours include round-trip transportation from all major Las Vegas hotels. (Popular helicopter aviation company Blade offers rides from Las Vegas to nearby cities, yet none to the Grand Canyon -- although you can always charter a private Blade ride.)

Related: Camping in the Grand Canyon with a family

Helicopter tours from Las Vegas range in length from short flights over the Grand Canyon to fascinating experiences that involve a full day including Champagne, food and a stop on the canyon floor.

Helicopter tours over the Grand Canyon have become increasingly popular, resulting in more helicopter operators and competitive pricing starting as low as $250 per person.

For those with time to spare and a desire to ride the rails, the journey from Las Vegas to Grand Canyon is a long, yet scenic one. Your day will start by departing from the Gray Line Tour Center in Las Vegas, located just minutes from the famous Las Vegas Strip. From there you will ride Amtrak’s Thruway bus service to Kingman, Arizona, where you will board Amtrak's Southwest Chief train and enjoy a two-hour ride to Williams, Arizona. From Williams, you'll climb aboard the historic Grand Canyon Railway for an hour-long journey through a beautiful stretch of forests and arrive just steps from the South Rim of the Grand Canyon.

Related: The best credit cards to use for train travel

The iconic Grand Canyon Railway is the highlight of traveling by train from Las Vegas to the South Rim. If you can embrace the 12+ hour round-trip by rail, you'll be presented with majestic scenery -- particularly on the last leg of the journey -- from the comfort of a vintage rail car.

If you prefer to let someone else do the driving and favor an on-the-ground mode of transportation, there are a vast number of bus tours -- some even narrated -- that include hotel transfers from Las Vegas and take guests directly to the South Rim.

These air-conditioned luxury motorcoaches include strategic quick stops at scenic points, including Grand Canyon National Geographic Center, Hoover Dam and Route 66. Many will also include lunch, refreshments and live commentary by an experienced guide for as low as $75 per person.

Once you arrive at the Grand Canyon you will have roughly three to four hours to explore the South Rim before making your way back to Las Vegas.

While many methods of transportation exist to get from Las Vegas to the Grand Canyon, the right one for you will depend on how much time you have to explore away from Sin City. Those with limited time may opt for an airplane or helicopter tour to take in memorable aerial views, while others might prefer the independence of driving themselves or using buses or trains.