Articles
Nick Ellis joined The Points Guy in 2016 as an intern and is now Reviews Editor, primarily responsible for arranging, writing (some of), editing and publishing reviews of hotels and airport lounges along with helping manage, write and edit travel content.
Follow
May 02, 2020
•
11 min read 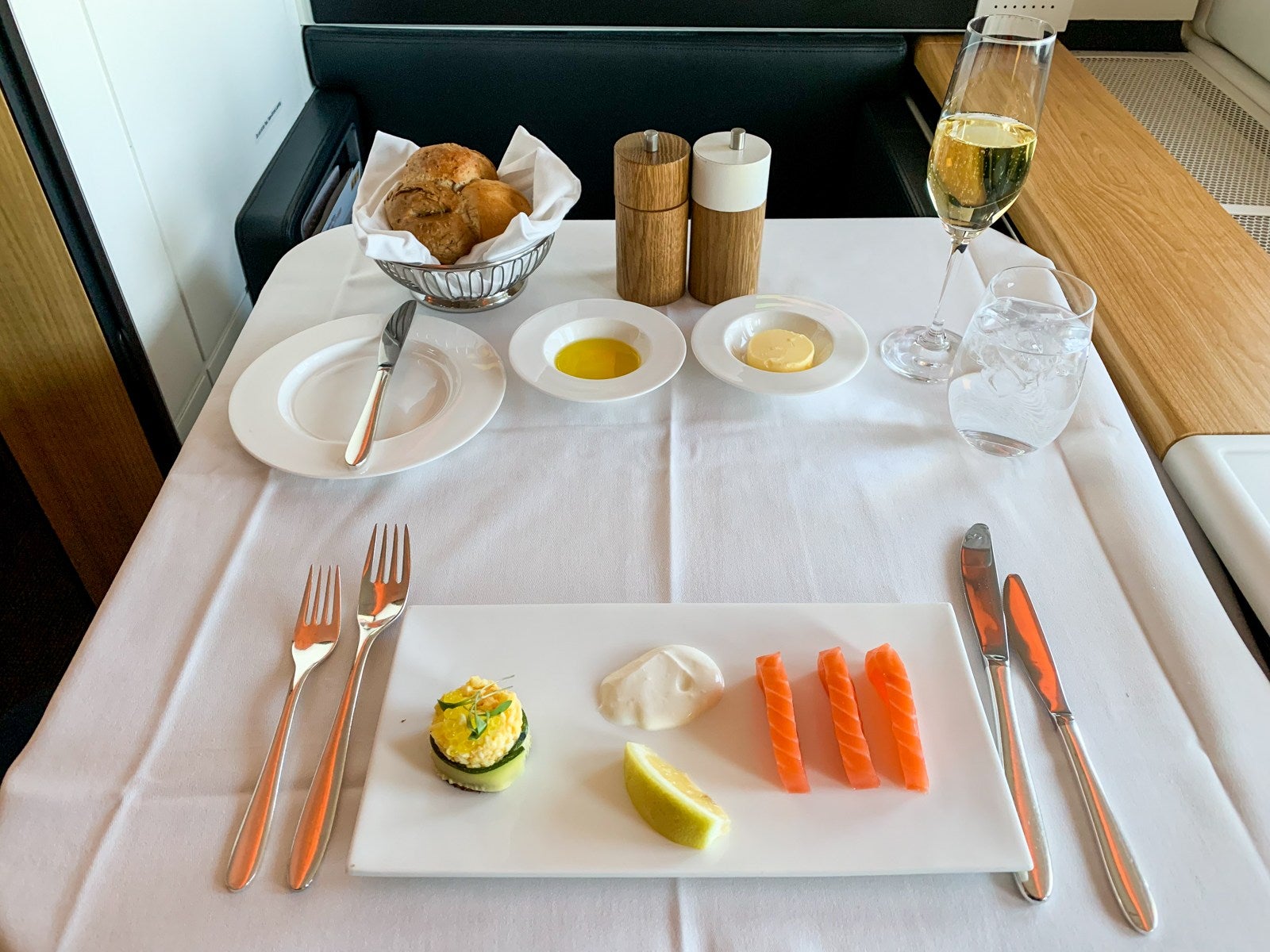 Airplane food often gets a bad rap for being tasteless, overly salty and undesirable in just about every way -- if you're seated in back. And while TPG staff members have plenty of experience with the not-so-good stuff in economy, we've also been fortunate enough to experience quite a few flights in the pointy end of the plane (someone's gotta do it!).

With a premium ticket comes a lot of food -- and drink -- and you definitely won't be left wanting for more. But, not all airlines are created equal, and some truly put on a show when it comes to food-and-beverage service. Here are 11 of the most memorable inflight meals that TPG staffers have had during recent travels.

Quenelles of pike and scallop in Air France La Première

Not only was the main course delicious, but there were several other courses of deliciousness, including an appetizer of langoustines, Ossetra caviar, fruit and gentian drops, complete with a mother-of-pearl spoon to top off the elegant presentation.

Qatar Airways is known the world around for its revolutionary Qsuite business-class product, and part of that experience is the authentic Middle Eastern culinary experience you can expect on board. It may not be the most elaborate biz-class meal in the sky, but you can always count on it to be tasty and authentic.

You won't want to skip the airline's famous traditional Arabic mezze, which comes with a trio of dips and salads served with warm pita bread -- a perfect way to start a trip to the Middle East or beyond.

When you fly with either of Japan's largest carriers -- Japan Airlines and All Nippon Airways (ANA) -- you can expect to be treated to some of the best food in the sky, and a Japanese menu that represents the best of the nation's rich culinary tradition. ANA recently introduced an all-new business-class product that is probably the new world standard, and the food is there to match the impressive seat. Think things like algae with tofu paste, salmon roe, crab sushi, salt-boiled prawn, scallops and more.

The experience is only made that much better by its beautiful, multicourse presentation. And who could forget about the sake to wash it all down?

If you find yourself on board an ANA flight in business class any time soon, do yourself a favor and try the Japanese menu -- you won't regret it.

There's just something about eating caviar at 35,000 feet, and Hong Kong's Cathay Pacific is one of the carriers that does it best. Global news editor Emily McNutt loved how her dining tray was transformed into an elegant ode to the finer things in life with a full 20 grams of King's Imperial caviar and all the fixings including blinis, creme fraiche and finely chopped eggs.

Cathay's first-class seats have footrests that are equipped with seat belts so if you're traveling with a companion, you can dine together, making the experience even more memorable.

Many people in the Western world are introduced to Korean cuisine through the dish known as bibimbap, which makes it no surprise that it's so popular among Korean Air's first- and business-class passengers. It's got the taste to back up its reputation, too, especially when you eat it with gochujang, a Korean hot pepper paste that’s delightfully spicy and adds a great kick to the bibimbap.

Korean Air's bibimbap is one of those dishes that's become a classic in the aviation world, and you'd be doing yourself a disservice if you didn't try it if you have the chance to fly up front.

A Northern lad at heart, TPG U.K.'s content producer, Dan Ross, grew up eating savory pies at his nana's house. He sets a high bar for his pies: Nana's originals. But Virgin Atlantic's take on the classic was "an absolute Northern delight."

"I’ve never eaten pie on a plane, let alone anything like this," Dan said. "The crust was amazing, and it was filled to the brim with lashings of gravy, fluffy mash and mushy peas by the side that made it just perfect — almost as good as my nana's (don't tell her I said that). It was like being at the pub at 35,000 feet. The only thing missing was a pint and a sticky barstool."

As TPG's resident foodie, Sam knows good food -- in terms of taste and aesthetics. This meal made the mark on both fronts.

"You know you’re going to have a good meal when the appetizers blow it out of the water," Sam said. "In Japanese, these small dishes are known as kozara and consisted of … drumroll, please … a grilled flounder roll, grilled lobster with egg yolk vinegar, a Japanese omelet topped with caviar, sea bream with braised soy pulp and a fried soft-shell crab marinated in vinegar sauce. Drool."

Everything In Asiana first class

"Not only was everything delicious, but my main course was seemingly endless," he said. "It was just so much yummy, yummy food."

Zach's meal started with Champagne and caviar — of course — followed by a slew of small appetizers and additional cocktails, including a Manhattan and a do-it-yourself "Korean taco" affair. And since he couldn't choose between the galbi jjim (braised short ribs) he had preordered and the bibimbap he saw on the inflight menu, the flight attendant brought him "what appeared to be full versions of both entrées on a gigantic tray" along with generous servings of banchan, the traditional fleet of side dishes served along with rice for Korean meals.

"Everything was insanely delicious," Zach said. "I managed to eat roughly a third of what was provided, and I was beyond stuffed."

United's sundae service for premium-cabin travelers "is one of my most favorite things," said points and miles writer Carissa Rawson.

Other than the fact that it's, well, free ice cream at 35,000 feet, what was memorable about the service?

"I love that they make it right at your seat, and you get to pick the toppings — and the hot fudge is still hot. It's not often you get to dictate what exactly comes on your plate on a plane, even in business class."

Pretty much everything TPG travel analyst Zach Griff ate in Swiss first class was memorable -- the menu featured several starters, a choice of soup or salad, delectable main courses, cheese and dessert. All of the dishes were unique to a particular region or a chef from a Michelin-starred restaurant in Switzerland.

But, he especially enjoyed the starter. Yes, the appetizer.

"Swiss first may not always offer caviar or top-shelf Champagne, but the Balik salmon starter and lemon-crusted turbot were so fresh and flaky they'd be eligible for an award if served in a restaurant on the ground," says Zach.

TPG's travel editor, Melanie Lieberman, had a very memorable meal when she flew to Hawaii -- for all the wrong reasons.

"Never mind the endless Champagne, caviar and lobster you usually find at the front of the cabin — boring! My most memorable meal? Cornflakes. Flying to Oahu on a first-class ticket with United, I was reminded about the little details that make domestic first class so completely, well, charming. When the crew ran out of hot eggs and apple soufflés, I was served a bowl of cornflakes. Perhaps, one day, I'll delight in some forbidden fruit(y pebbles). But I suppose you need to fly international first class for that sort of indulgence."