For the rich and famous, no request is impossible thanks to highly trained luxury hotel concierges 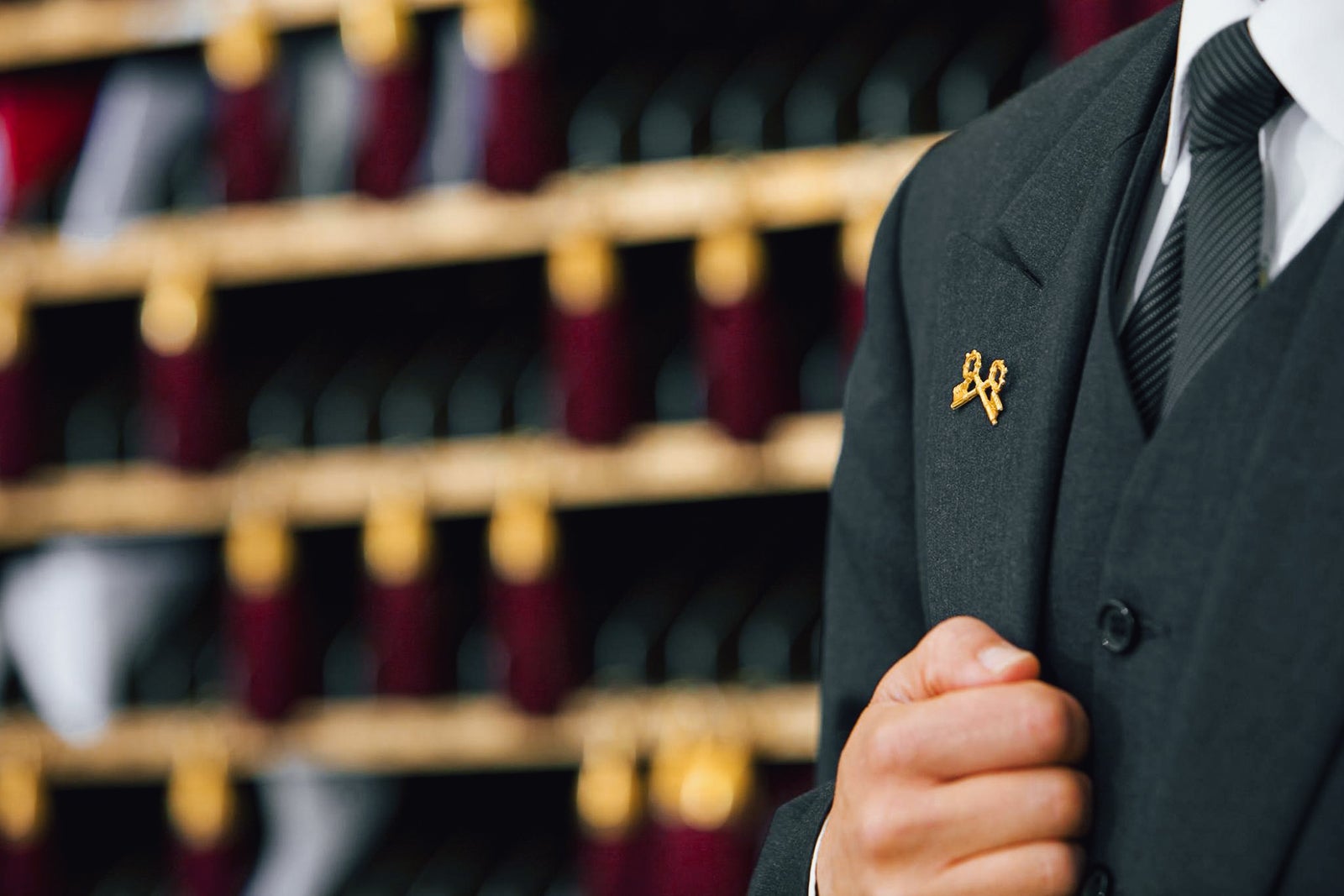 If your hotel concierge sports golden crossed keys on their lapels, you know they are the best of the best. The pins are the symbol of Les Clefs d'Or, or The Golden Keys, a highly exclusive professional association of hotel concierges that represent the elite of the profession.

"Is there ever a strange request? Not in our world," says Brian Mackenzie, chef concierge at the NH Collection Barbizon Palace in Amsterdam and the 3rd vice president of Les Clefs d'Or International. "The world of a hotel concierge is the passion to serve guests day in, day out. To face challenges and obstacles in delivering those memorable experiences. The performance is decisive for a successful stay."

Still, most "regular" guests who have never requested more than a dinner reservation from a Les Clefs d'Or concierge might find their accomplishments on behalf of a guest something of a miracle. Discretion is a must for concierges, but we've asked them to share some of the most over-the-top guest requests that they've been able to fulfill.

For a concierge, it's all about making the impossible possible, which often means finding clever solutions to a problem. For instance, when an American celebrity and his family wanted a private tour of the Neuschwanstein Castle in Germany, an anonymous concierge at The Charles Hotel in Munich made that happen — despite the castle not offering private tours.

"We contacted one of our contacts on-site and bought a whole tour — 350 tickets — for the family so they could enjoy their privacy," says the concierge. "We arranged a helicopter to fly them from Munich to the castle and had a horse carriage ready to bring them to the castle."

The concierge notes that buying out a full tour at short notice was extremely challenging, given the popularity of the site, but they were able to make it happen. "Also, finding a spot for the helicopter to land close to the palace was quite tricky," they note.

Leave it to a guest at a chic boutique hotel in Paris to have a fashion-related request for their hotel concierge.

Hugo Vaysse, chef concierge at Hotel Montalembert, was once tasked with acquiring a specific Dior dress in a certain size and color for a guest attending a party in London. Typically, that's an easy one. But the dress was out of stock not only in Paris but also across Europe.

"After several searches, the dress that she wanted was only available in one copy at the time of the request in Doha, Qatar," says Vaysse. Vaysse then contacted a fellow Les Clefs d'Or concierge in Qatar, who was able to connect him to the Dior boutique to source the dress, which was shipped to the guest in time for the party.

Concierges are extraordinary event planners. Case in point: Concierge Bryan Funai of the Waldorf Astoria Las Vegas once organized an extraordinarily extravagant dinner for a couple celebrating their wedding anniversary — one he considers the most over-the-top event he's ever planned in his career.

"With the guest's desire of 'gluttony' in mind, I worked with our team of chefs to plan a 'Seven Deadly Sins Dinner,' a seven-course meal with each of the courses representing all of the seven different sins: envy, gluttony, greed, lust, pride, sloth and wrath," he says. But it wasn't just about the food.

And then he brought in actors. "We hired actors to be the couples’ courtiers: several very handsome gentlemen of the court in addition to several sexy but coy ladies-in-waiting. A shirtless Cirque du Soleil–like jester and performer kept the guests entertained between courses," says Funai. "We played tracks from the band Enigma like 'The Principles of Lust' with their haunting Gregorian chants. The wait staff served each of the courses dressed as 16th-century Benedictine monks, complete in robes, hoods and rope cords!"

Purchasing a Dutch barrel organ and shipping it to South Korea

"I was asked to help a businessman looking for a barrel organ, which was very common on the streets of Amsterdam in the '90s. The barrel organ was to be displayed at a Dutch replica village in South Korea," says Mackenzie, the previously-mentioned concierge at NH Collection Barbizon Palace in Amsterdam.

Mackenzie brokered a deal between the guest and a local organ operator, then organized the conveyance of the organ to South Korea via container ship.

"After two months, I got a call from South Korea; the businessman needed my help again," he says. The team did not know how to operate the machine, so Mackenzie had the previous owner flown out to South Korea to teach them.

"A few months after Montage Los Cabos opened, a hurricane was about to impact us. However a guest needed to be in California the next day for a very important meeting that he could not miss," says the hotel's concierge, Paulina Ruiz. "The airport was already closed; no commercial or private flights could leave the area. His only option was to drive for 20 hours."

So Ruiz jumped into action and organized two private drivers, a luxury car, and all the movies, snacks, and blankets a passenger might need on a daylong drive to ensure the comfort of the guest.

"The only thing was that neither of the drivers had a visa to enter the United States, so I contacted a Les Clefs d'Or associate in Enseñada to coordinate transportation to bring the guest to [Los Angeles], and he made it on time!"

The ancient dog breed Xoloitzcuintli, also known as the Xolo, was a revered animal among the Aztecs, who believed the dog to be created by the gods to protect the living and shepherd the souls of the dead to the underworld. Naturally, a guest at the St. Regis Mexico City wanted one after falling in love with the breed and its history.

"With 24 hours to work with the request, my team and I made around 50 phone calls to find the puppy dog with the guest's specifications," says Arturo Ortiz, the hotel's chef concierge and former president of Les Clefs d'Or Mexico and Central America. "We not only found the puppy but were available to fly him to our guest's country with all the certifications and documents for him to arrive the day after our guest arrived home."

New York's New Year's Eve ball drop in Times Square is one of the city's most famous — and popular — annual events, one that typically requires standing in the crowded street for hours. That wouldn't do for one guest at The Langham, New York, Fifth Avenue hotel.

"He wanted to not be in the crowd but to have exclusive access to take photos and videos. I arranged for him to be right where the news broadcasters were filming from, where he was able to take selfies and videos with the ball dropping live behind him," says the hotel's concierge, Tasir Bukhari. "I did this through an entertainment company that sets up viewings, and they made the necessary special arrangements, including arranging for passes for the guest to be able to get past police barricades — with full approval of law enforcement, complete with a background check on the guest, of course."

Serving as a personal jeweler

"One of our guests arrived from Dublin, Ireland, and was planning on proposing to his girlfriend during their trip. Unfortunately, he lost the engagement ring," says Zalan Schuster, chef concierge at Four Seasons Hotel Riyadh at Kingdom Centre in Saudi Arabia. "He reached out to me and the concierge team for assistance less than five hours before he planned to propose. After reaching out to our network of contacts, we managed to secure the same ring right on time!"

The guest later let the hotel know that the original ring had been found at home.

Creating an indoor lawn for a dog

"A few years ago, we had a guest ask us to orchestrate somehow bringing grass so her dog could pee in the suite, and she didn't have to leave the hotel for this," says Jens Maier, chef concierge at The Dolder Grand in Zurich. "Of course, we offered to take the dog on a walk on her behalf, since the hotel is surrounded by beautiful forest paths, and the dog would surely like that better. Our guest did not want this and insisted on the provision of the indoor lawn within two hours."

Maier notes that turf like this usually has to be pre-ordered, but he was able to collaborate with a local florist to provide a framed piece of turf for the guest within that two-hour window. The guest was utterly delighted. "No request goes unanswered at The Dolder Grand and we do our best to fulfill the desires of our guests — no matter how strange," he notes.

Featured image by PHOTO COURTESY OF LES CLEFS D'OR USA/FACEBOOK
Editorial disclaimer: Opinions expressed here are the author’s alone, not those of any bank, credit card issuer, airline or hotel chain, and have not been reviewed, approved or otherwise endorsed by any of these entities.