Is a Legoland Florida VIP Tour Worth the Price for Families?

Articles
Edward Pizzarello covers family travel for TPG Family and also blogs at Pizza in Motion. You can find him hosting the Miles to Go podcast and eating doughnuts on Twitter and Instagram.
Follow
July 15, 2019
•
11 min read 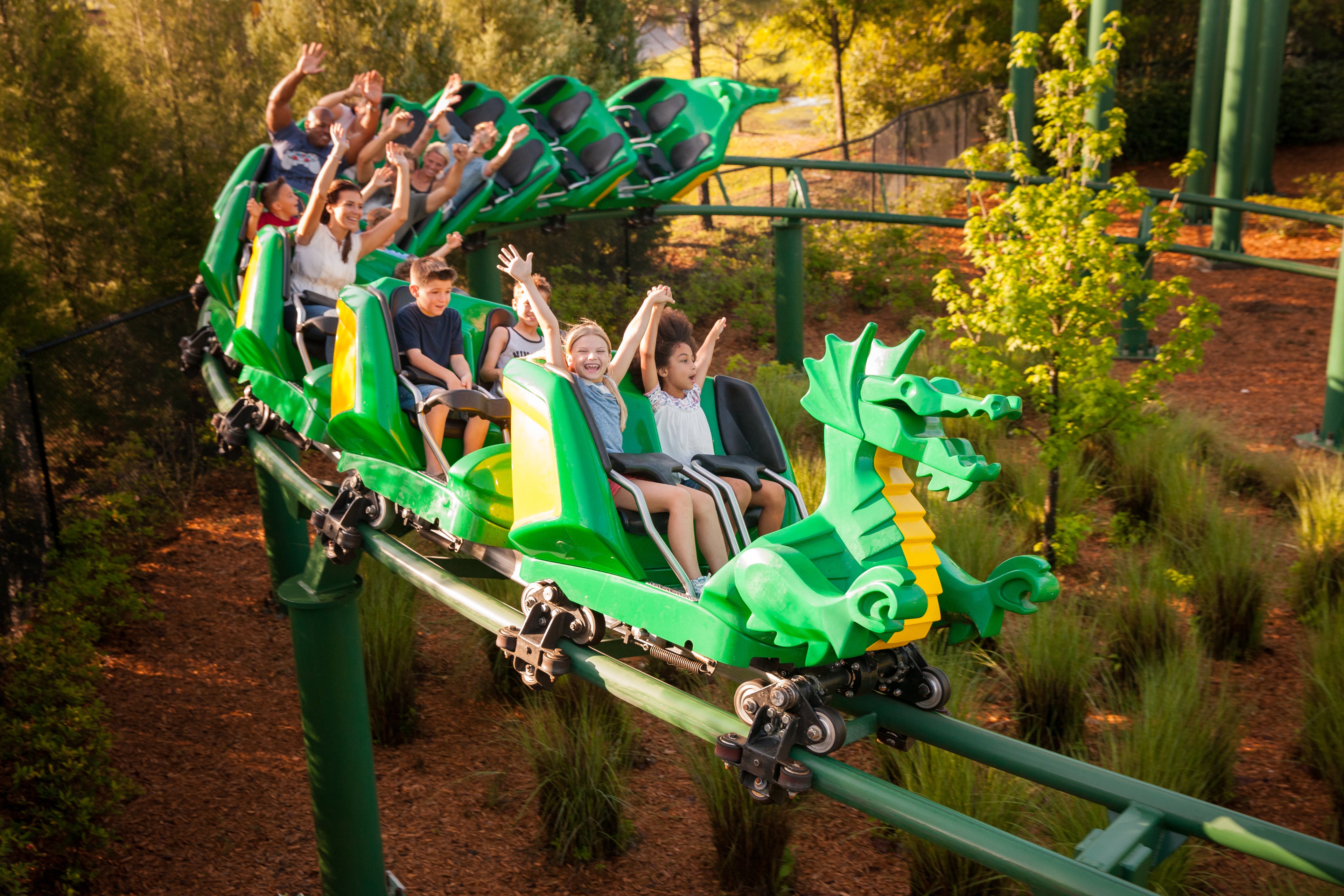 As theme parks get more crowded in the Orlando area, VIP tours can be a smart way to maximize the price of daily admission. Theme parks have figured this out and continue to raise the prices of these special-access packages. TPG Family's Editor Mommy Points got a taste of what it's like to spend $3,000 at Universal Orlando to visit Hogwarts and Hogsmeade quickly. Our family got the chance to experience the "high life" of bricks and fun on a Legoland Florida VIP Tour recently. I'll share what that experience was like.

When we first started taking our children to Legoland about five years ago, we looked into VIP tours. We had taken advantage of the Disney World versions and saw the value if you utilized the tour correctly. At the time the pricing -- almost $3,000 for a room and VIP tour -- was higher than we wanted to spend, sight unseen. We hadn't been to the park yet and we weren't sure what to expect. We decided to do Legoland on our own.

As it turned out, the park was small enough back then that a VIP tour would have been a waste. Many of the rides didn't have long lines, mostly because many of the premium attractions that exist now weren't even there back then.

Fast forward to a recent Legoland visit and some new options popped up as we booked our hotel room. (Side note: Staying in a room at Legoland is at least half the fun.)

While booking, I was given two options to book a VIP tour as part of our hotel stay:

Note that you still have to purchase park admission in addition to the tour experience. Tour pricing varies depending on the makeup of your family.

Legoland Florida has added a number of new attractions that are quite popular. Even so, it's still a one-day park (as we detailed in the essential Legoland Florida guide). I figured we would be fine with four hours of priority access with the Red Brick package if we timed it correctly.

We woke up at Legoland Hotel and had a full, late breakfast. Initially, I had thought about starting the tour just after lunch. However, Legoland has much shorter operating hours than other amusement parks in the Orlando area. With a bit of a short day, I wanted to make sure we had enough time to conquer everything the kids wanted to do. We started just before lunch, which turned out just fine.

We met our guide Jenn in the lobby of the Legoland Hotel. She gave us special badges to wear and led us into the Master Builder Workshop (also known as the Model Shop). She also immediately connected with both of our children. They gravitated to her and felt comfortable, which set the tone for the day.

If you or one of your children is a Lego fan, this experience alone is almost enough to make the day worth it. We have one certified Lego nut (our son) and one semi-Lego nut (our daughter) who were more than happy to wander around the Master Builder Workshop and ask questions of the builders. I had to inject my dad humor from time to time as well.

It would have been easy to spend a big chunk of our day there among the Lego structures, but we had a theme park to tackle. Jenn led us out the back door of the workshop. She paused while we got a drink and gave each of us our own Lego Minifigure. Lego Minifigures aren't expensive, but it was little touches like this along the way that really made the day special for our children.

Riding All the Rides

We had our pick of rides. The newest section of the park, built around "The Lego Movie," had opened since our last visit. We decided to start there. Hardcore Legoland fans will remember this as the Land of Chima.

It didn't take long to see what sort of access we would have to various attractions. Masters of Flight is generally the most popular ride in the park with wait times stretching over an hour on the busiest of days (no, you generally won't find five-hour waits like Disney World). We bypassed even the Fastrack lines and headed right to a side door of Masters of Flight.

From there, we took our places in line for the next available Triple Decker Flying Couch (ask your kids if that doesn't sound logical). Just like that, we saved our first hour that we would have been waiting in line.

From there, we trimmed a 45-minute wait for Unikitty's Disco Drop into less than a five-minute wait.

The rest of the day went the same way. Jenn walked us through side doors, exits and various other hidden entrances to get us onto every ride the kids wanted without any wait. Over the course of almost four hours, we never waited more than roughly five minutes for any ride. On the day we were at Legoland, the crowds weren't crazy. The most popular rides were 45–75 minutes, where second-tier rides were generally under 30 minutes. Still, we easily rode twice the number of rides we could have without our VIP guide.

During lunch, Jenn walked us to the front of the line of the restaurant where we wanted to eat. After our order was placed, she waited for the food and brought it to the table. Those sorts of things always make me a bit uncomfortable. We're more than capable of ordering lunch and I don't want our kids to grow up spoiled. But, Jenn made it so easy and effortless, it was hard to tell her no.

We had mentioned to Jenn that both of our kids were huge fans of building with Legos. She made sure to block out time at the end of the day for us to head back to the Master Builder Workshop.

The Master Builders blew our kids away. First, they let them wander around the bins of parts, harvesting whatever pieces they wanted to make Minifigures. The collection of random Lego pieces was pretty darn staggering.

After that, one of the Master Builders sat down with the kids to build a project together. They didn't have any written plans, which the kids were excited about. They just listened to the Master Builder and pieced together the project with a few hints from him. He was very generous with his time, spending 30 minutes building with them and answering plenty of questions about his job.

At that point, we had a choice. Legoland had offered us more time with Jenn for an additional $100 per hour. In a vacuum, that felt like a reasonable price to continue getting instant access to all the rides. Ultimately, however, we decided against it. The kids had some shopping they wanted to accomplish (for true Lego nerds, the parks usually have a few Lego sets you can't buy anywhere else) and we had to get ready for a long day at Disney World the next day.

Jenn surprised us with some Fastrack passes that were good for whatever rides we wanted to experience again. We headed back out into the parks for one last hurrah. That last hurrah was a bit longer than expected, since a few of the employees manning the rides told us to keep the cards to use on another ride. What do you do when you're a kid and a theme park says you can ride again without waiting? Full steam ahead!

The connection our kids made with Jenn really set the tone for the day. When VIP tours at Disney World used to be more affordable, we made a connection with a guide there who's now like a member of the family. She focused on making great memories for our children, which is what Jenn did during our time with her. When your kids aren't yet teenagers who are annoyed to spend time with mom and dad, a day at a theme park together as a family stays with them. So many days at theme parks go awry, from long lines to short tempers and broken rides. When everything goes right, it's a big win.

As our day ended, we all agreed we were pleased with our VIP experience. It wasn't cheap, though it was much more affordable than similar versions at Disney World and Universal Studios. Legoland has grown to the point where it can be more than a one-day park if you want to do everything it has to offer. The VIP tour shortcuts that. While tickets to Legoland are comparatively cheap, keep in mind you will save a bit of money on park tickets if you only go for one day. That offsets some of the cost of the VIP tour.

A Legoland VIP experience is right for you if you're not on a tight budget and you're pressed for time. There's no question you can accomplish a lot more in a short time as a VIP. If your family is interested in visiting multiple theme parks on vacation, knowing you can get through Legoland in a day can make a difference in how you plan your trip.

The VIP experience is also perfect for true Lego fans. The Master Builders couldn't have been more generous with their time. There's no doubt that's the part of the day that our kids remember most fondly.

Unless you plan to visit Legoland on the busiest days of the year (think Christmas and New Year's), the Silver Brick experience is probably overkill. Most park days aren't long enough to have seven busy hours. You can easily start the day on your own and plan to meet your guide later in the day when ride times spike. Make sure you ask for Jenn -- she's a real treat!