Articles
Clint Henderson is the managing editor for news at TPG. He worked in TV news for 20 years, including stints at ABC, MSNBC and Fox, before landing his dream job. Send tips to Clint.Henderson@thepointsguy.com.
Follow
Aug. 14, 2020
•
9 min read 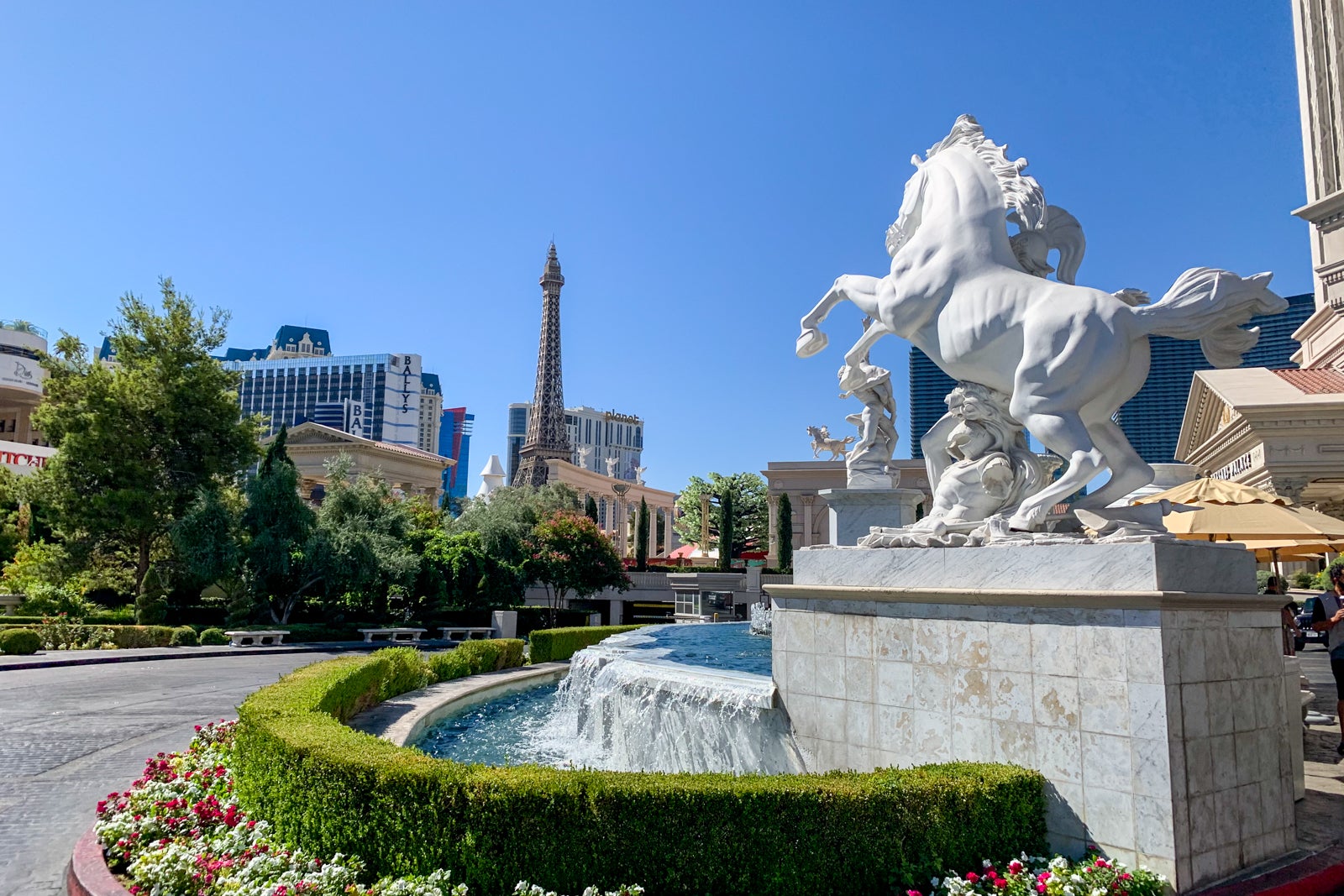 As the travel industry reopens following COVID-19 shutdowns, TPG suggests that you talk to your doctor, follow health officials' guidance and research local travel restrictions before booking that next trip. We will be here to help you prepare, whether it is next month or next year.
Viva Las Vegas. I've been to Sin City many times, but I've never seen it like it is right now in the age of coronavirus. It's a brave new world of social distancing, masks, plexiglass, closed casinos, thinned crowds and even hand-washing stations at some entrances on the Las Vegas Strip. Unfortunately one thing hasn't changed. Resort fees are still being billed, despite reduced services at many resorts.For more TPG news delivered each morning to your inbox, sign up for our daily newsletter.Here are nine ways Las Vegas is different.

I've never seen Las Vegas as empty as it was in August. That said, it can still get crowded in spots where people tend to congregate (think pedestrian crossing bridges). I saw plenty of crowding around buskers and with groups of friends. In general, though, it was refreshing to see the city with so few people.

The one area that was a glaring difference was at the airport. Getting off the plane, it was crowded in the terminal and the people movers at the airport were full. The baggage claim area was a nightmare of crowds and it was even worse at the area where you go to get your Uber or Lyft. Not only was there not enough social distancing, the area is a pedestrian danger zone. My Uber driver told me several people have been hit trying to cross traffic to get their ride share. It was the place where I felt most in danger of being exposed to coronavirus.

The state of Nevada requires visitors to wear masks in public places, such as casinos, restaurants and other common spaces. Overall, I would say compliance was running at 95% which impressed me. Unfortunately, not everyone knows how to wear a mask with many people wearing masks below the nose or loudly chatting on cell phones with the mask pulled down to the chin. I didn't see anyone yelled at for not wearing masks though I did see workers ask a few folks entering a couple of the casinos to put on a mask.

Social distancing signage was nearly everywhere I went (see gallery below). Unfortunately, the signs weren't always successful at directing behavior. I will say most of the time in the city, I felt I could safely get away from crowds of people even in the casinos. I felt especially safe at my hotel, the Hilton Grand Vacations Elara, where there was plenty of space, signs and hand sanitizer. It was far enough off the strip that I felt safe; plus there is no casino.

Sometimes it felt like there were more hand sanitizers than people in Las Vegas! You can check out the gallery below but there was no shortage of opportunities to get free hand sanitizer squirts (though why -- oh why -- would you put in a sanitizer machine with a button you have to touch!?).

Never did I ever expect to see hand-washing stations at the entrances to casinos. Sure enough, there they were front and center at the Bellagio. I'm actually incredibly impressed to how well Bellagio handled the pandemic. That was the casino where I saw the most attention to safety protocols including the use of plexiglass screens at poker tables and dealers wearing full face masks.

Much is still closed

There are lots of venues and casinos that are shut down. Planet Hollywood is shuttered. It's website says "For the well-being of our team members and guests we have temporarily closed."

Some poker rooms remain shut, and not all gambling rooms are available.

Related: All you need to know about Las Vegas loyalty programs

All the malls are open, but some stores and attractions are still shuttered. Note that there is very limited capacity at some shops so the popular designer boutiques including Balenciaga, Dior, Louis Vuitton, and Gucci have lines to get in.

The Mob Museum and The Neon Museum have reopened. The number of visitors is limited, and would-be tourists are advised to buy timed tickets in advance.

Most restaurants are open again with limited hours and capacity. Same deal for most resort pools. Pools are supposed to adhere to social distancing guidelines, but I didn't see that enforced at all.

Enforcement was not a thing that I really saw while I was in Las Vegas. Aside from a lot of signs admonishing folks, I saw few workers enforcing any mask-wearing, social distancing or doing crowd control. The use of plexiglass shields was rare. Most dealers and cocktail workers were wearing masks, but very few were wearing face shields or gloves.

Related: Getting to Vegas on points and miles

Most nightclubs and parties are closed down

The Nevada governor ordered nightclubs and most daytime clubs shut down. That means popular venues like Omnia and Marquee Las Vegas are closed for now.

There is some good news for 'club kids.' Day clubs are offering socially distanced and adults-only pool parties. Crowds are much smaller (though maybe not small enough), and you'll need reservations and a table. Some of those pool parties are even during nighttime hours.

Most are featuring music by local resident DJs. You aren't likely to see big-name DJs until COVID-19 restrictions are lifted.

One of the top things to do in Las Vegas isn't available at the moment. All shows were closed back in March, and there's no firm dates on when they will resume. Some restaurant bars had reopened and a few venues were even selling tickets again, but a resurgence of cases led to a second shutdown in July.

In fact, the loss of revenue from Las Vegas is one of the reasons given for the bankruptcy of Cirque du Soleil.

MGM Resorts International says concerts and other entertainment likely won’t return in August. Others have suggested they won't return this year.

Gatherings of 50 or more people are not allowed under current Nevada COVID-19 restrictions.

Vegas was fascinating to see during COVID-19, but I didn't really feel that safe. The crowds at McCarran International Airport (LAS) at baggage claim and especially in the line for Uber freaked me out. I personally wouldn't go back until there is a vaccine, and I certainly wouldn't spend more than the 10 minutes I did at each casino, even though I think they are doing what the can to keep the virus at bay.

Related stories
Legislation that could gut credit card rewards set to move through Congress
Would you stay at 1 of these 8 haunted hotels this Halloween?
Southwest winter flash sale: Get one-way flights for as low as $29
You can currently buy points and miles with up to a 100% bonus — but should you?
Featured image by (Photo by Clint Henderson/The Points Guy)