Travel Etiquette: Is It Acceptable to Groom at Your Seat? 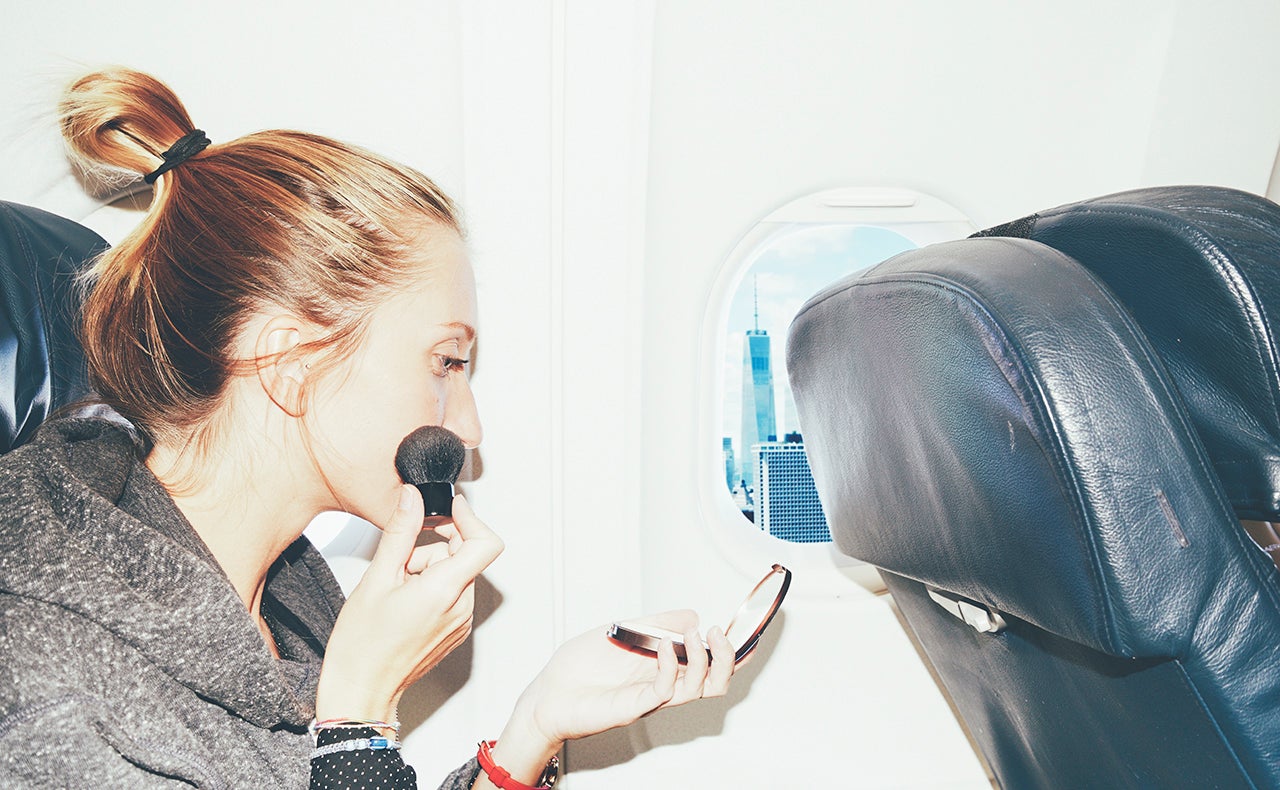 Air travel tends to elicit strong opinions on decorum. (Who gets the armrests? When is it cool to recline?) And passengers double down on those convictions when it comes to personal primping on board. When we asked readers to sound off in the TPG Lounge about top travel pet peeves, one of the most commonly cited triggers was passengers’ in-flight grooming.

Onboard manicures (or, heaven forbid, pedicures) were deemed among the nastiest habits. Elizabeth N. recalled sitting next to someone who kept going at hers with a file: “I kept thinking about how the shavings were circulating through the air — gross.” Indeed.

Also universally reviled was perfume or cologne application in such cramped quarters; Dawn B. was once stuck on the tarmac for 90 minutes as one passenger’s liberal spritzing “sent half the plane into a coughing fit.” Kellie C. agreed, and implored such offenders to stop — though she’s willing to overlook quick and simple tasks like “a swipe of lipstick, maybe a dusting from a compact.”

So then, where exactly is the line? When is it OK to spruce yourself up on an airplane, and when should you heed Kellie’s plea and just let it alone? Let’s first consider the regulations.

Most airlines have plenty of rules about grooming, but they’re mostly for flight attendants (carriers police everything from fingernail length and nostril hair to mustache shapes and even acne). Cabin crew members are forbidden from tending to their appearance in view of passengers, but there are virtually no hard-and-fast restrictions on what preening the rest of us can do at our seats.

But as always in the air, it’s crucial to follow instructions. Even if something is technically permitted, should the crew ask you to stop, just comply. Otherwise you risk ending up like Jeanie Daniels, who was arrested after a nail-polishing incident on a 2012 Southwest Airlines flight. She had been told at her seat to cut it out, but kept on varnishing in the lavatory anyway. A flight attendant busted her, followed by a heated exchange, and two police officers were waiting for Daniels at the gate. She spent 10 hours in jail before the charges were dropped.

Note that it was arguing with a flight attendant that got her into hot water, rather than the nail polish itself. In fact, the TSA permits pretty much any kind of beauty and hygiene supplies to come through security, and thus onto the aircraft. That means bobby pins and deodorant, shaving cream and tweezers. Even speciality tools like airbrush makeup machines and laser hair removers are given the carry-on green light. But just because you can doesn’t mean you should. For more on that, we turn to the experts.

Lizzie Post, great-great-granddaughter of famed etiquette writer Emily Post and author of the 18th edition of "Emily Post’s Etiquette," spelled out her philosophy simply when interviewed by The New York Times. She said grooming is “inappropriate when you have to be this close to someone. So take it to the restroom or wait until you get off the plane.” Good advice generally, but what about the specifics?

Diane Gottsman, author of "Modern Etiquette for a Better Life" and founder of The Protocol School of Texas, is a very frequent flyer, and echoed her fellow etiquette gurus. “Grooming is seldom an emergency,” she told TPG, listing a few of the most heinous in-flight faux pas, lest there be any doubt: “Using your water glass to brush your teeth and then spitting the water back into the cup is over the line ... do not clean your ears, use your battery-operated razor or apply sunless tanner in the cabin of an airplane. You are not at home, and this is not your personal lavatory. Less is best.”

If your seatmate turns out to be an uncouth culprit, do as Gottsman did on a flight where her seatmate kept brushing loose hair everywhere. She simply said, “I know you aren’t aware of this, but I am spending a great deal of our flight brushing your hair off my dress.” The passenger stopped immediately and apologized. “It’s all in your tone of voice and pleasant delivery," Gottsman said.

Hair brushing is small potatoes compared to the hygiene horrors that cabin crew members sometimes witness. Take Dan Air, the professional pseudonym of the man behind Confessions of a Trolley Dolly, who has been a flight attendant with a major European carrier for 14 years. “The aircraft is not a beauty salon,” he told TPG with a note of combat fatigue. He’s seen it all, from a passenger “trimming his nose hair and wiping it on his headrest cover” to someone “scrubbing the dry skin off the soles of her feet and then collecting it in a sick bag to hand off to [his] colleague.” Yikes.

And the very worst he’s come across? “We were halfway through our in-flight service when I was struck by a disgusting odor — really took my breath away. Looking around to find the source of the offending smell, I noticed a passenger with his bare feet up on the tray table, biting his toenails.” Pause for a moment to let that sink in. Not clipping his toenails (bad enough) — biting them.

Dan politely asked the man to stop, and he did for a while, but before long “his feet were back up on the tray table, and he was chewing away at his toes. It was unbearable. So I said, ‘Sir, you may not think you’re doing any harm, but the smell coming from your feet is certainly doing my nose some harm. Do us all a favor and put your shoes back on. Shoes on. Now!’ A few other passengers burst out laughing and one even clapped.”

If you take away just one thing today, let it be this: do not be the toenail-biting guy.

For the passenger perspective, TPG sought out those who fly most. Tausha Cowan, a communications manager and travel writer who runs The Globe Getter, completes two or three trips each month and helped nail down some of the unspoken rules of primping at 30,000 feet. She allows for some “light grooming, such as putting on makeup or using a facial swipe,” but hopes fellow travelers will “avoid anything that smells, like nail polish or perfume. And anything that involves your mouth — brushing your teeth, flossing, gargling — should always be done in the bathroom.”

Shay Spence, a magazine editor who flies up to 10 times a month, is a bit more insouciant. “A lot of people have strong opinions about what others do on planes, how they act, what they eat — I don’t really have any of those rules. Just don’t strike up a conversation with me, don’t push ahead when we’re deplaning, and maybe don't eat tuna or hard-boiled eggs.” Regarding grooming, he said, “I don’t really care, as long as you’re not invading my personal space or being gross about it. Put on your makeup, brush your hair, whatever; I’ll probably be asleep and won’t notice.” He does, however, draw the line at “clipping toenails — the most vile act of all.”

Jasmine Nielsen, an NYU instructor and nonprofit consultant who works all over the world, limits her onboard sprucing-up to “a quick coat of lipstick and a breath mint,” and implores other flyers to follow suit, though perhaps more to avoid envy than disgust. “I get really dry skin on planes,” she said, “and never remember to stash moisturizer in my bag. So I was beyond jealous on a flight to Argentina when the guy next to me kept slathering himself in expensive face cream.”

Want a golden rule to fly by? Groom next to others as you would have them groom next to you. Other than maybe some simple makeup or hand cream, save your beauty regimen for the lavatory. (Just please be courteous in there, too — no one wants to wipe your beard hairs or contouring powder off the vanity.)

And all this advice to avoid freshening up at your seat does not mean you shouldn’t freshen up at all. Our friend Dan Air left us with this savvy tip: “The next time you fly, why not do all your grooming beforehand? Give yourself a good pamper, pop on a nice outfit — you might even stand a better chance of getting an upgrade.”