Visit These 17 Incredible Philippine Islands Before Everyone Else

Articles
Lori Zaino is a writer for TPG and TPG UK covering travel, news, points and miles and more. She's been based in Madrid, Spain almost 15 years and is an expert in travel throughout destinations such as Europe, Southeast Asia and Africa.
Follow
Feb. 13, 2019
•
8 min read 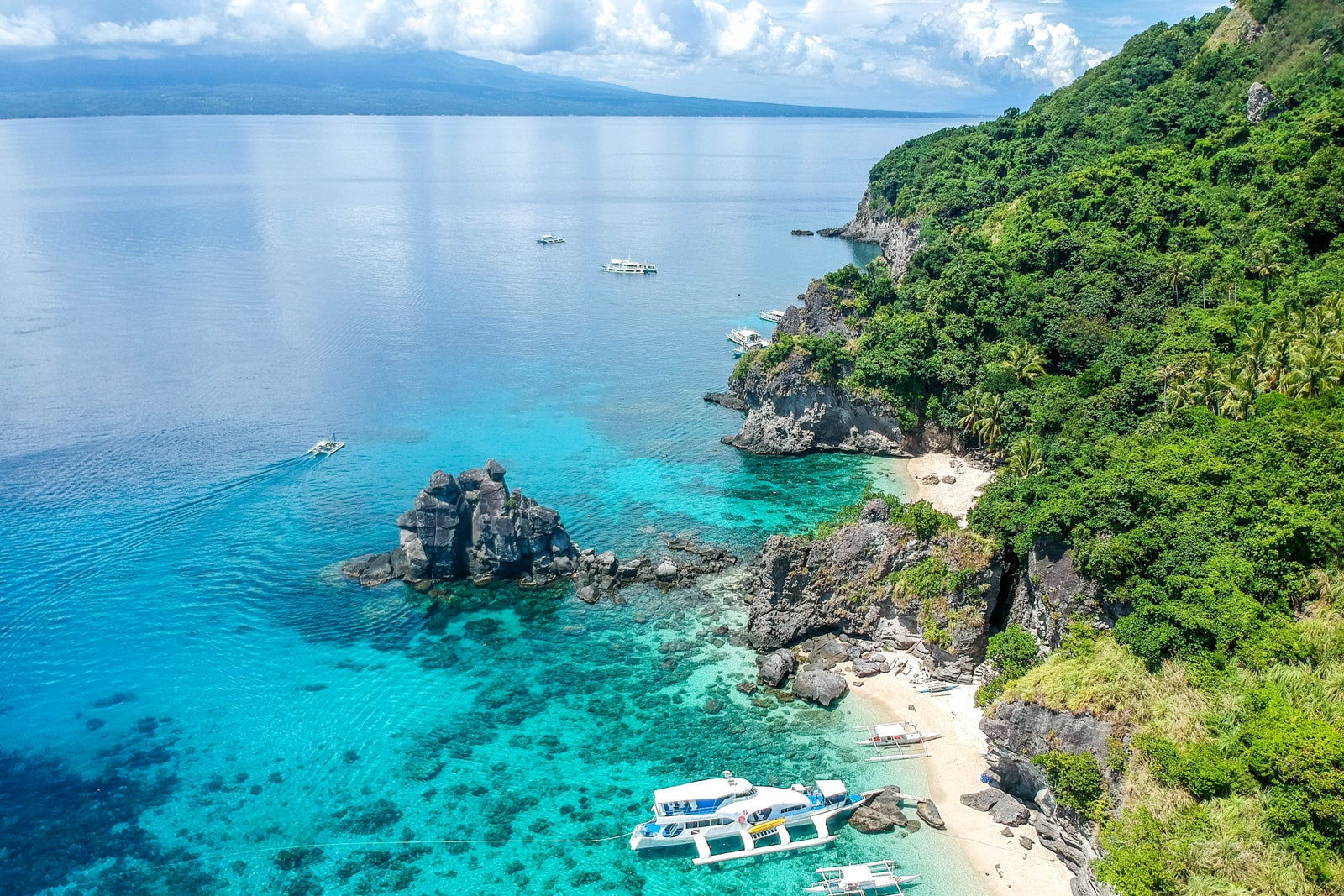 Looking for a dreamy island getaway where you an escape the wintry weather? Palawan and Boracay probably come to mind, as they've grown rapidly in popularity. While these islands have stunning beaches and crystal-clear waters, they've also become severely overtouristed. But there are more than 7,000 islands in the Philippines — and many have the same gorgeous natural features with none of the crowding and development.

So these 17 islands to your travel to-do list for an unforgettable island experience in the Philippines.

This archipelago of 10 islands is frequently referred to as the next Boracay, so go there now to enjoy the pristine beaches and limestone cliffs that frame the famous turquoise waters before everyone else catches on. The largest of the islands are Gigantes Sur and Gigantes Norte, but book a boat tour to see the other Gigantes islands and feel like a true explorer. Caving and rock climbing are especially popular on these islands, and ask a guide to tell you stories about the sacred spirits living in caves like Bakwitan.

Getting There: Fly to Iloilo (ILO) from Manila (MNL) or Cebu (CEB). Then, take a four or five hour-long ferry to the Gigantes.

Known as the New Zealand of the Philippines thanks to their rolling green hills, the Batanes are the Philippines' most northern islands, just south of Taiwan. While there are 10 islands, only three are inhabited: Batan, Itbayat and Sabtang. Isolated from the rest of the Philippines, the Batanes have a strong and distinct Ivatan culture, and the local people enjoy a deep connection with the islands. This special trio of islands has more than just the usual deserted beaches and rocky cliffs, too. Make sure to see the Great Wall of Batanes and the huge boulders than line Valugan Bay.

Getting There: Fly nonstop to Basco (BSO) on the island of Batan from Manila or Angeles (CRK). From Basco, you can boat to the other islands. NorthSky Air reportedly runs an eight-seater plane for the 10-minute flight to a dirt airstrip in Itbayat, too.

Once known for political turmoil, the three Masbate islands are rarely frequented by tourists. Today, the islands are safe to visit, but tourists haven't quite caught up yet. This means the islands are delightfully uncrowded. Start with Ticao, taking a boat trip to the Halea Nature Park, a pristine beach cove backed by jungle foliage. Divers should plan to visit the underwater paradise called the Manta Bowl, home to many manta rays. From December to May, the whale sharks feed on the plankton in the water near the Donsol province on Ticao, and it's not uncommon to see between 15 and 20 per dive. The Buntod Marine Reef Sanctuary near the island of Masbate has one of the most picturesque sandbars in the world, and Burias is the place to be if you want some uninterrupted sand and sun time.

Getting There: Fly from Manila nonstop to Masbate City (MBT). From there, you can ferry to Ticao and Burias.

Surfer-paradise Siargao is one of the more popular islands on this list. It's definitely been "discovered," but you'll still find quiet spots and far less tourism here than other Philippine islands. Consisdered the surf capital of the Philippines, you can easily wander in and out of surf shops in the resort town of General Luna to sign up for a lesson or rent gear. Don't miss an island-hopping day trip to spots like the Sugba Lagoon, part of the tiny Caob Island: a stunning group of mangrove-covered islets reminiscent of Raja Ampat, Indonesia.

Getting There: Fly nonstop from Cebu or Manila to the Sayak Airport (IAO). Boat day trips can be arranged from Siargao to the smaller island of Caob.

The island born of fire, Camiguin, is one of the smaller islands in the Philippines. Thanks to its tiny size, you can visit most of the island in just a couple days, including one of the world's oddest tourist attractions: the sunken cemetery. Camiguin's fiery nickname and black-sand beaches are the result of a volcanic explosion of Mount Vulcan, which sunk part of the island in 1871 — namely, the cemetery. A large cross marks the spot in the middle of the sea, but the rest (including the original crucifix) you'll have to see by diving underwater. Other activities include visiting the clam sanctuary, home to more than 2,600 clam species, and diving into the hot and cold springs on the island.

Getting There: Fly nonstop from Cebu to Camiguin (CGM).

Apo is one of the best spots in the Philippines for snorkeling and diving, thanks to its impressive surrounding reefs, which are home to 400 species of coral, 650 species of fish and enormous sea turtles. (the surrounding waters are a protected marine habitat). The island is small enough that many travelers come for only the day, but there are places to stay on the island. Just don't expect fancy resorts. This sleepy island is pretty low-key, with a few hiking trails, some gorgeous sandy strips of beach and not much else.

Getting There: Fly nonstop from Cebu or Manila to Dumaguete (DGT), then take a boat over from the Malatapay Wharf.

Another 10-island archipelago located off the Caramoan Peninsula, the show "Survivor" filmed a season on the white sands and hidden lagoons of Matukad. Perhaps the most off-the-beaten-path island is Guinahoan, with green hills similar to those of the Batanes. The Manlawi sandbar on the island of Lahuy has huts that float when high tide rolls in, while Lahos, another island where "Survivor" was filmed, has a golden stretch of beach that expands the entire width of the island, allowing you to see the ocean from both sides.

Getting There: Fly nonstop from Manila or Angeles to Virac (VRC), where you can find boats to take you to the various islands.

This island is actually unpopular with many Filipinos, as some believe the island is inhabited by witches. But Siquijor's locals don't fear the witches, and there's really no reason you should, either. Instead, embrace the island's myths and legends and head into the mountains to visit one of the island's ancient healing shamans. Other famed spiritual spots include the Cambugahay waterfalls and the famous 400-year-old Balete tree, rumored to be enchanted. Siquijor is also known as the island of fireflies, which you can spot twinkling around the island, especially at the Hambilica Firefly Sanctuary.

Getting There: Fly nonstop from Cebu or Manila to Dumaguete, then take a ferry to the Dumaguete Seaport.

Featured image by The Apo Island in Dauin, Philippines. (Photo by Cris Tagupa via Unsplash)