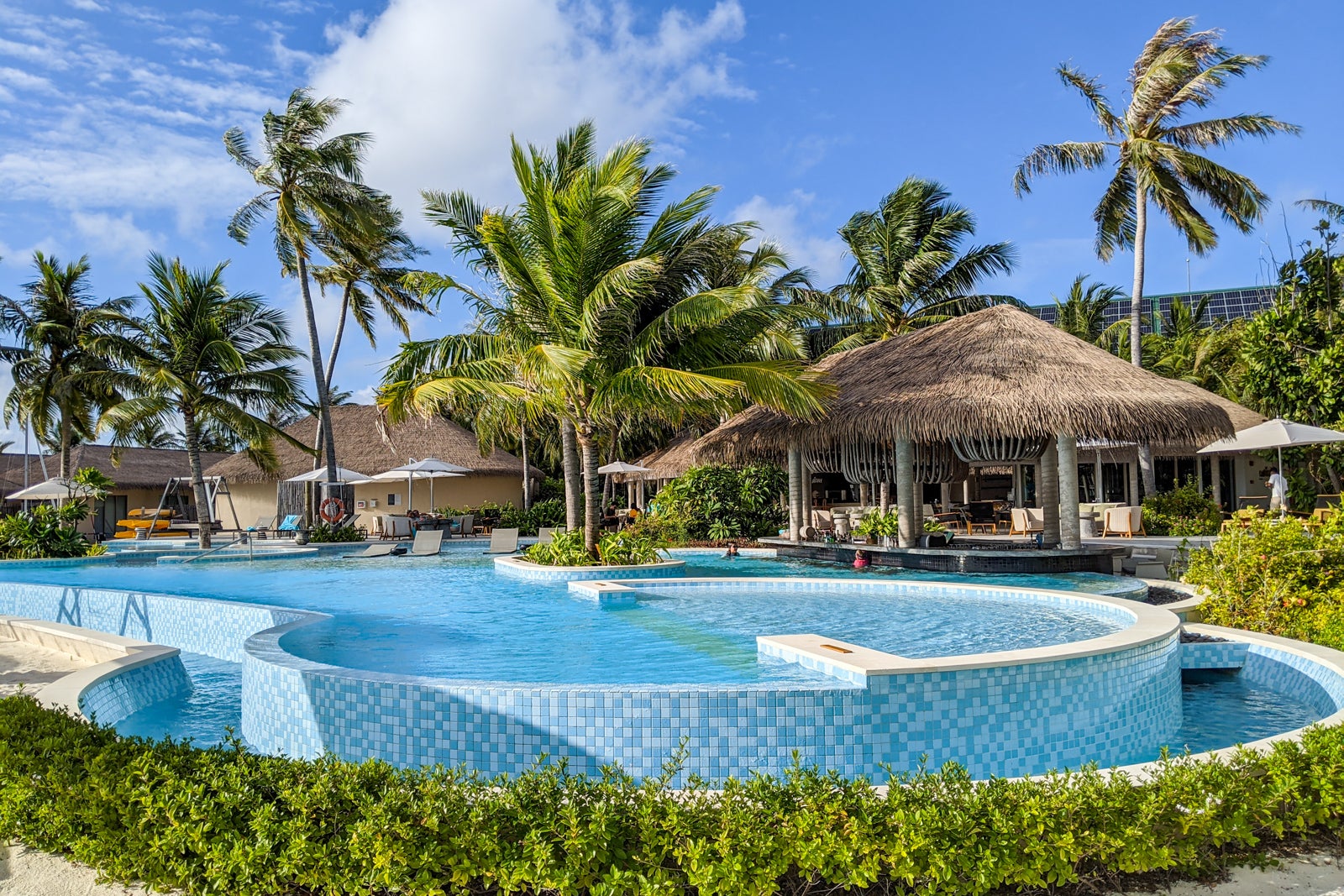 The IHG Rewards Premier Credit Card offers many beneficial perks for frequent IHG travelers and a big welcome bonus. With an annual fee of $99, however, you may not get enough ongoing value from this card if IHG One Rewards isn’t your primary hotel loyalty program. Card Rating*: ⭐⭐⭐⭐

The IHG Rewards Premier Credit Card offers a lot of perks for travelers who frequently stay with IHG. For example, you’ll get automatic Platinum Elite status as long as you’re an IHG Premier cardholder. The card also offers a unique fourth-night-free reward perk that allows cardholders to pay zero points for every fourth night when redeeming points for award stays of four nights or longer.

Plus, the card currently has its best-ever welcome bonus: 175,000 bonus points after spending $3,000 on purchases within the first three months of account opening.

But, one perk alone — the anniversary free night each year, valid for a night costing up to 40,000 points — can easily provide enough value for you to justify paying the IHG Premier’s annual fee each year. Premier cardmembers can also top off their award nights with points, allowing you to use the certificate to stay at higher-priced hotels like the Six Sense Laamu in the Maldives.

So, let’s look at whether the IHG Premier Card is a good choice for you.

The IHG Premier Card is well-suited to travelers who can take full advantage of the card’s perks. These perks include complimentary Platinum Elite status, a fourth-night-free reward when you redeem points for a stay of four or more nights and an anniversary reward night each year and more.

With a generous sign-up bonus, solid return on IHG spending and plenty of perks, IHG One Rewards loyalists will benefit from this card. Even travelers who only stay with IHG several times a year may get ample value from the IHG Premier Card.

Related: Why I’m happy to pay the annual fee on the IHG Premier Card

Right now, the IHG Premier Card is offering its best-ever welcome bonus. You can earn 175,000 bonus points after spending $3,000 on purchases in the first three months from account opening.

TPG values IHG points at 0.5 cents each. Based on this valuation, the bonus is worth $875 alone.

Related: The best time to apply for these popular Chase credit cards based on offer history

The IHG Premier Card carries a relatively modest $99 annual fee. However, the card’s actual value hinges on whether you’ll use the benefits frequently enough to justify that annual fee. Here’s an overview of the card’s main IHG-related perks:

Anniversary free night: Cardholders receive a reward night certificate valid for a one-night hotel stay at a property costing up to 40,000 points. This benefit is annual, starting on the first account anniversary. Although IHG uses dynamic award pricing, it isn’t difficult to find an appealing redemption option for your certificate. For example, I’ve redeemed anniversary free night certificates for stays at the InterContinental Buenos Aires, InterContinental Madrid and Kimpton De Witt.

Note that you can use an unlimited number of points to top off this certificate and use it for higher-priced properties. For example, a room priced at 55,000 points can be booked using the free night plus 15,000 points from your IHG One Rewards account.

10,000 bonus points after spending $20,000: You’ll earn 10,000 bonus points and a $100 statement credit after spending $20,000 and making one additional purchase in an account anniversary year. Based on TPG’s valuations, these bonus points are worth $50; combined with the statement credit, this bonus can be worth up to $150. However, consider whether you’ll realistically spend $20,000 on your card during your account anniversary year — especially if you can otherwise put those purchases on a solid everyday spending card.

20% off when buying IHG points: Save 20% on your purchase of IHG points when you pay with your IHG Premier Card. However, this discount doesn’t stack with other discounts when IHG puts points on sale. Also, these points are considered non-qualifying points and will not count towards elite qualification, so the value will be minimal for most cardholders.

As other cards drop shopping and travel protections, these benefits could be a serious factor when choosing a new credit card. However, as discussed in the next section, you won’t get a high return rate on most purchases with the IHG Premier Card.

Hotel credit cards tend to be weak on the earning front, but this card’s potential earnings at IHG hotels is pretty solid.

How to redeem points

IHG One Rewards does not have an award chart. Instead, it uses dynamic award pricing. IHG’s website states that nights start at 10,000 points, although we’ve seen nights priced as low as 5,000 points. And although there’s no stated maximum, the highest I’ve seen is 120,000 points per night (excluding Six Senses and Mr and Mrs Smith properties, which do frequently cost more).

But, even with IHG’s dynamic award pricing, it’s still possible to maximize IHG One Rewards redemptions. And, with a little bit of searching, you often can redeem IHG One Rewards points for more than TPG’s valuation of 0.5 cents per point.

You also can mix points and cash for your award stays. In some cases, this may provide good value. When you book this way, IHG sells you the extra points and then debits your account for the full number of points. In this example, you’d effectively purchase IHG points for 0.63 to 0.66 cents each. IHG frequently sells points at this price (or cheaper), which can be another way to top up your account.

It’s also worth mentioning the IHG Premier’s fourth-night-free reward perk again. When you book a reward night of four nights or longer, every fourth night of that stay will cost zero points. You can use this perk unlimited times each year, but points and cash stays are not eligible.

Finally, some travelers believe IHG’s policy on blackout dates makes it one of the weaker hotel programs for award night availability. The terms and conditions of the IHG One Rewards program note the following:

There are no blackout dates for Reward Nights; however, room inventory is limited and subject to prior sale. In addition, Members may not be able to redeem Points for Reward Nights at InterContinental Residences, IHG Army Hotels, select Six Senses Hotels Resorts and Spas and select Mr & Mrs Smith hotels.

So while there are no blackout dates per se, hotels can limit the number of rooms they make available for award bookings.

Related: How to redeem points with the IHG One Rewards program

If you’re loyal to IHG, a card from another hotel brand might not merit your consideration.

However, IHG does have the IHG Rewards Traveler Credit Card, which has no annual fee. The current welcome bonus on this card is its best ever too: 120,000 points after spending $2,000 on purchases within three months of account opening. The card earns 5 points per dollar at IHG hotels and resorts, 3 points per dollar at gas stations, utilities and restaurants and 2 points per dollar on other purchases. Benefits include automatic Silver status with IHG One Rewards, a 20% discount on IHG points purchases and a fourth night free on award stays.

Related: Why I often choose IHG and Choice hotels, despite limited elite perks

If you’re a loyal IHG traveler looking to make the most of IHG One Rewards, it makes sense to have the IHG Rewards Premier Credit Card. After all, the card provides perks like automatic Platinum Elite status, a fourth-night-free reward on award stays of four or more nights and a large bonus multiplier for IHG stays. Plus, it’s possible to get a lot of value when redeeming IHG One Rewards points.

If you've been on the fence about this card, receiving the best welcome bonus this card has ever offered might convince you to apply now.