Articles
Melanie Lieberman is the managing editor for global features and manages destination, hotel, cruise and product features and news. Formerly a Travel + Leisure editor, her work appears in Bloomberg Pursuits, Jetsetter, Saveur and others.
Follow
May 29, 2019
•
4 min read 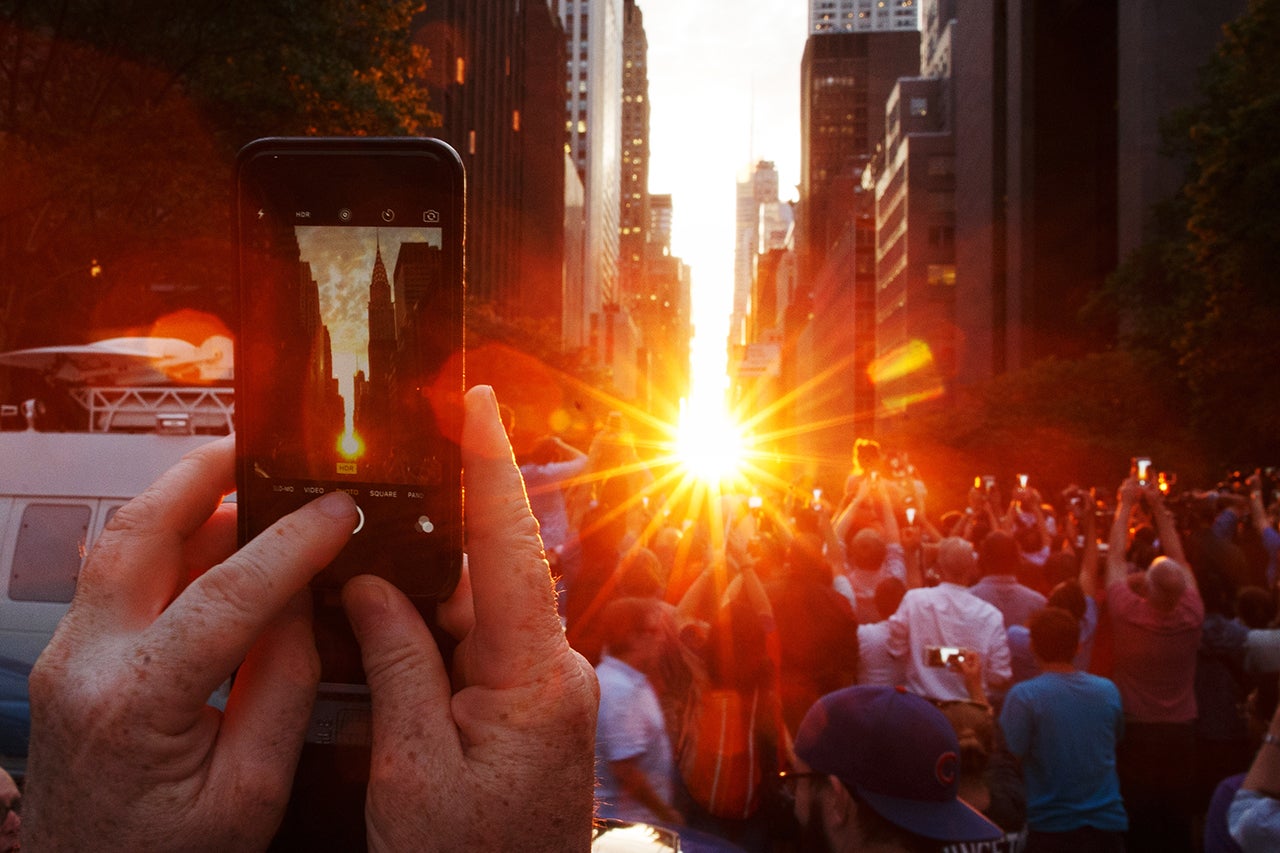 How to See Manhattanhenge 2019 — And Take Pro-Quality Photos on Your iPhone
This post contains references to products from one or more of our advertisers. We may receive compensation when you click on links to those products. Terms apply to the offers listed on this page. For an explanation of our Advertising Policy, visit this page.

Four times a year, Manhattan’s east-west grid aligns with the setting sun to create a phenomenon known as Manhattanhenge. It’s a celestial spectacle that can only be viewed in New York City.

The term, coined by astrophysicist Neil deGrasse Tyson, refers to the similarities between the city’s skyscrapers and the Neolithic monument, Stonehenge, when the sun sets perfectly between the structures.

New Yorkers and visitors can catch the striking event for the first time this summer on Wednesday, May 29. The sun will sink down between the skyscrapers just after 8:12pm local time. The phenomenon will also be visible on Thursday evening, May 30, also at 8:12pm.

Frustratingly, there's a chance of showers and thunderstorms both nights, which could obscure your Manhattanhenge photos.

Katja Sherlock — filmmaker, photographer and founder of NYC Instantly (@nyc) — told The Points Guy that the best views of Manhattanhenge (and, as a result, the most Instagram-worthy photographs) are above 14th Street, because the alignment gets you an unobstructed "straight line view from east to west."

Try 14th and Broadway; 23rd Street and Broadway; 34th Street and 5th Avenue; 42nd Street and the Tudor City overpass; or 57th and 8th Avenue. These viewpoints will help you capture the moment the sun sets squarely in the middle of the street. At many of these spots, however, you should expect a crowd.

If the crowds are too much, head downtown to Liberty Street and Nassau, or North Moore Street on the corner of Hudson — you might not get the “money shot,” but you’ll be able to take a number of other photographs playing with the light of Manhattanhenge and the neighborhood’s architecture.

To help you photograph Manhattanhenge, we also asked pro photographer and iPhone photography expert Andrew Kearns (@andrewtkearns) for tips and tricks to taking amazing sunset shots on your iPhone or smartphone — because you don’t need to haul around a $4,000 DSLR to catch the scene.

“I have photographed plenty of sunsets,” Hawaii-based Kearns told The Points Guy. “When exposing [with an iPhone], I try to click on or near the sun at sunset — usually near it. I find it dials in a good exposure for the scene.”

But “with buildings or foreground subjects in the frame, it gets tricky to expose. If you click [directly] on the sun, it’ll make the subject dark. If you click the subject, the sun gets blown out.” To avoid this, search for a “mid-tone that dials in the exposures.”

Sherlock noted that it’s important to make sure HDR, which works by combining multiple shots together with slightly different exposures, is activated. “Keep the phone as steady as possible when taking photos with HDR.”

“As the sun gets lower,” Kearns added, “the shadows get longer. You can use them to create a cool image.” Kearns suggested that photographers shoot from above (think: the Empire State building or Chrysler Building) to capture the shadows cast by Manhattanhenge.

This will also give you a “longer perspective” with “more depth.”

In addition to snapping photos of Manhattanhenge, this is a great opportunity to “photograph people enjoying the scene,” too.

Plus, with all of Manhattan washed in the golden glow of an amazing sunset, your subjects will look just as radiant — no crazy photography equipment required.

“Capture candid images of people watching the sunset using portrait mode to provide a little depth between the foreground and background,” Sherlock suggested, "[and try to] capture some silhouettes. Go low with your iPhone and capture people crossing the streets with the sun setting in the background. This is one of my favorite shots.”

Not in town to see this particular Manhattanhenge? Fortunately, you don’t have to wait long for the next one. Expect the sun to align with the New York City grid on July 12 and July 13.