Articles
Brian Biros spent most of the last 15 years backpacking through 100+ countries. He writes TPG's Points & Miles Backpacker column, so you'll more likely find him in a hostel than a Ritz, if you can find him.
Follow
Jan. 14, 2019
•
14 min read 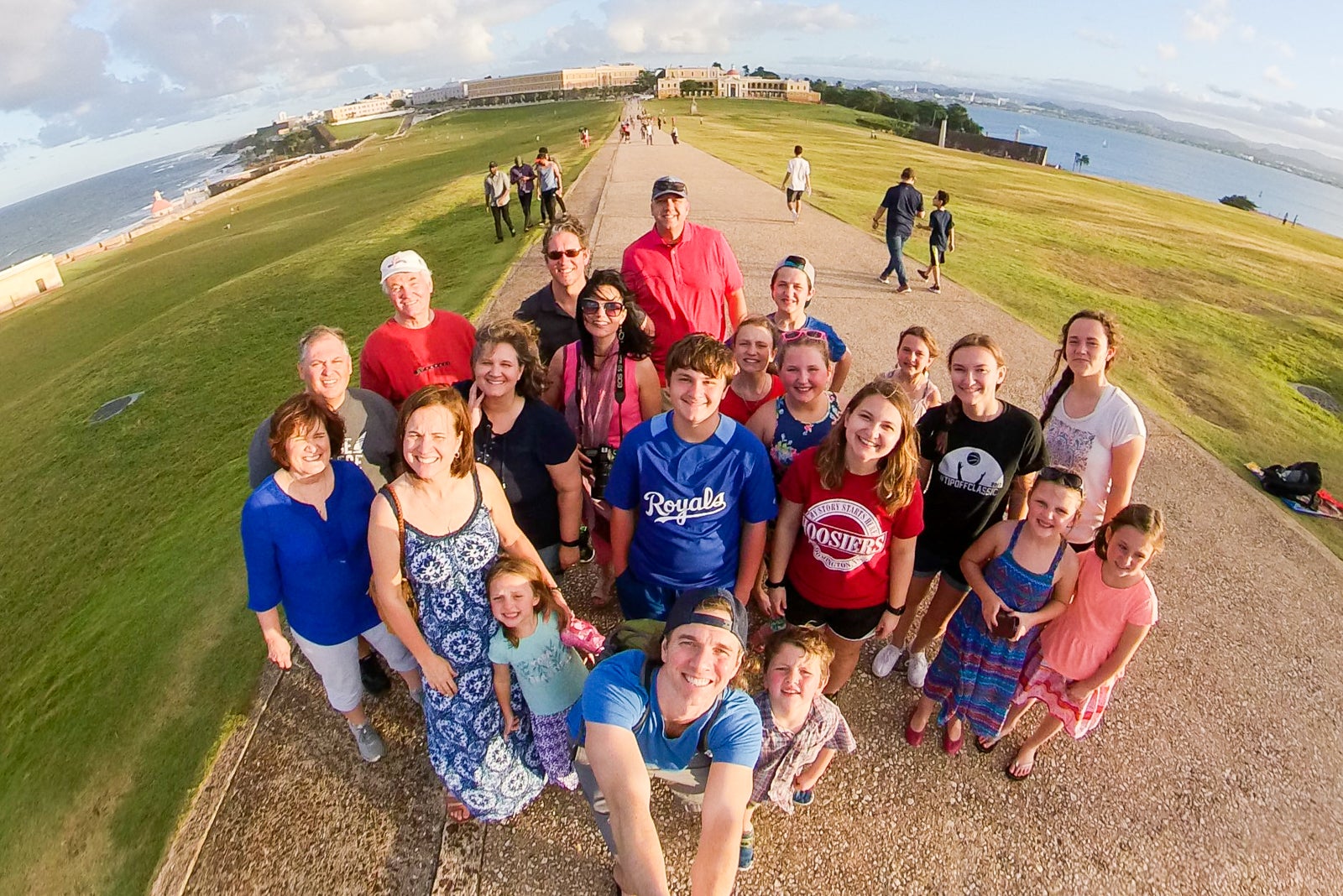 The more a family grows, the more difficult it is to corral everyone at the same time in the same place. Sure, it can still happen at the usual events such as weddings and major holidays, but the likelihood of a large family vacation seems to shrink as the family expands.

But as my family proved last week, it isn't impossible. Through many hours of planning over the course of many months, I was able to coordinate a trip for a family of 24 people (yes, you read that right) to Puerto Rico. The best part about it was that I flew everyone there, all two dozen of us, on points and miles.

Of course, I learned plenty along the way. So if you're trying to arrange a large vacation that the entire family will be talking about for the rest of their lives, consider this your definitive guide.

The catalyst for this massive family getaway was a pretty unusual scenario, and actually the same reason I ended up as a writer for TPG. I won TPG's Marathon to a Million contest almost three years ago and landed the one million JetBlue TrueBlue points prize, novelty check and all.

However, even then (as I noted in my first-ever article for TPG explaining what I'd do with my winnings), I didn't think planning a trip for my entire family was a possibility. But my dad, who had accumulated a few hundred thousand Amex Membership Rewards points through his small business, expressed an interest in doing "something" for the family with these points. He also pointed out that he had no idea how to do so.

As I became more skilled in the points and miles game, I realized I could actually make this happen between his points and mine. And I learned how surprisingly attainable a large family points and miles trip was, even without winning a big contest.

Step 1: Pick a Time and Place That Works for Everyone

This is really the only thing that everyone has to agree on, and it can prove to be difficult — perhaps the most difficult part of the planning process. For example, maybe a ski trip sounds fun to the majority of your family, but it's tough to sell it to a family member that has no interest in skiing. For my family, I wanted a warm, tropical paradise, and I knew that would interest everyone. I also wanted a destination that wouldn't require passports. Almost none of my nieces and nephews own a passport, and at $115 to $145 each, it's a significant expense.

So I settled on Puerto Rico. It was easily accessible from the Midwest with options on JetBlue. And although no one would need passports, the language and culture would feel remote for someone who has never left the continental United States.

Another tip: Don't dwell if someone can't go or chooses not to. Chances are, if you're reading this, travel is a high priority. But it's not for everyone else. You and I may think it's crazy to turn down a free family vacation, but other people have other priorities. Move on, and focus on making this the best trip for those who do see the value in it.

Step 2: Book Flights As Soon As They Go on Sale

When you are booking a large number of flights with points, it's best to do so as soon as they go on sale. Refer to this guide to know when each airline releases their tickets, but low-cost carriers typically work the best. Unlike the big three airlines that release flight schedules 11 months in advance, low-fare carriers release schedules six to nine months out, meaning if you are booking flights as soon as they go on sale, you only need to plan that far in advance.

If the routing works, I recommend Southwest Airlines for the following reasons:

Also, remember that the Companion Pass works on award bookings as well, and it's currently available through this amazing Southwest credit card offer.

My initial plan was to get most flights on JetBlue, but the pre-inflated ticket prices over Christmas made that pretty much impossible. I was able to pivot our trip to New Years, and I snagged one semi-reasonable return fare for most of us in early January. For my sister's family, I found a doable outbound fare from Indianapolis on Delta Air Lines that made use of my dad's Amex points. But the bulk of our flights were booked on Southwest at a great fare as soon as they went on sale. If we had enough Southwest and Chase points, we would have booked everything on Southwest.

Between the three airlines we redeemed a total of 715,860 points for 46 flights (not including a lap baby). Here is the breakdown by airline:

The numbers above include the 10% rebate on JetBlue redemptions I get with my JetBlue Plus Card, but I still got the best value on Southwest. And, in addition to the various reasons mentioned above, it was also the most convenient option, with a direct flight from Chicago Midway (MDW).

While there unfortunately isn't a great way to redeem points for Airbnbs, it does provide the best value on several levels. Here are several reasons large rental houses booked through sites such as Airbnb and VRBO are better for large families than hotels:

However, these large rental units are often not in huge supply, and the best value properties get booked up way in advance. So, like plane tickets, the sooner you reserve these the better.

I had to get two Airbnb rentals to house our entire family. While there were options that would fit all of us, I wasn't in love with any of them. I decided to keep an eye on listings over the course of a couple months in hopes that a new listing would pop up that would work. With the rental market constantly changing, especially following Hurricane Maria, this was a good possibility.

Sure enough, a rental with a private pool located a block from the beach in San Juan eventually appeared. It was a beautiful and newly renovated six bedroom, five bath home for $600 per night for 15 people. I then found a top floor apartment with private roof access and beautiful views of Isla Verde beach to house the other nine of us for $350 per night, just 50 feet from the main house.

Step 4: Get Others Involved in Planning

While you may be the most qualified to handle the flight bookings, others will inevitably want to chip in and help out. They can peruse Airbnb and VRBO listings as well. Or you can suggest they look up ideas for activities on the ground.

Getting the entire family to participate in elements of trip planning can help every member of the group feel more involved and excited. I told my family to check TripAdvisor and to pick up guide books from their library. Even the kids can help with this.

There are a few luxuries that become accessible for a reasonable rate (per person) that you simply couldn't get with a smaller group. One, as I already mentioned, is a lavish Airbnb. Another is the option to do private or charter tours. If you find a tour that has a capacity at or slightly above your group size, the per person cost is likely less than if you were paying individually for a spot. And you'll get a private tour for your group, which you can likely customize as needed.

For our group of 24 people, we booked the 25 person capacity Innovation boat through Kayaking Puerto Rico. While I rarely do tours, this organized experience proved to be great for our group. The guides taught the young ones how to snorkel and guided them through the reef. And the price per person was about 10% cheaper than if we had all paid individually.

Step 6: Roll With the Changes

Just like any vacation, not everything will go according to plan. However, that's much more likely to happen with a massive group. Roll with it and adjust when necessary. This trip was originally scheduled and completely booked for Thanksgiving of 2017. However, Hurricane Maria cancelled those plans. I was able to get everything refunded and book it again for the New Year of 2019, and it was much easier the second time around.

Step 7: Treat It Like a Once in a Lifetime Trip

As this is probably the first time you've done a trip of this magnitude, make the most of every moment and interaction. Encourage more campfire and sunset beach time than TV time. In fact, you may even want to consider a TV-watching restriction. Perhaps the experience will show you and everyone else involved that massive family vacations are possible, and you'll all decide you want to do it again. But there's also a very real chance that this is a once-in-a-lifetime trip. So be sure to treat it like one.

My family members had plenty of their own advice, too, which I recorded in this Instagram story takeover.

What I learned above all else is how possible a points and miles trip of this size actually is.

I expected the trip to use most of my TrueBlue points and my dad's accumulation of Membership Rewards points. But in reality, my dad's Chase Ultimate Rewards points and Southwest Rapid Rewards points paid for the bulk of the flights, and he only started earning those points three years ago when I taught him how to attain the Companion Pass using Southwest credit cards. (I also had him to shift his personal expenses to the Chase Sapphire Reserve and business expenses to the Chase Ink Business Preferred credit card, earning Ultimate Rewards points that could be transferred to Southwest, his airline of choice.)

This vacation could very possibly be done again if I coached the rest of my family on points as I did my parents. But, as my mom stated on the flight home, "Let's wait a few years."

I hope our family vacation tale has inspired you to do the same with your family, or even a large group of close friends. Feel free to reach out with any other questions that could help make this trip more attainable for you.

The Points & Miles Backpacker is a weekly column appearing every Monday. TPG Contributor Brian Biros, who has backpacked the globe for the past 15 years, discusses how to fund this adventurous, budgeted and increasingly popular form of travel with points and miles. He’ll also explore all things backpacking-related. Read his story here and high-level approach here. He's taking a break from his normal column this week to share his family time.