Articles
Kristine Hansen is a contributor to The Points Guy, among other outlets, and is the author of books about Wisconsin cheese, Wisconsin agri-tourism and Frank Lloyd Wright. Based in Wisconsin, she covers travel, design and food.
Nov. 26, 2018
•
8 min read 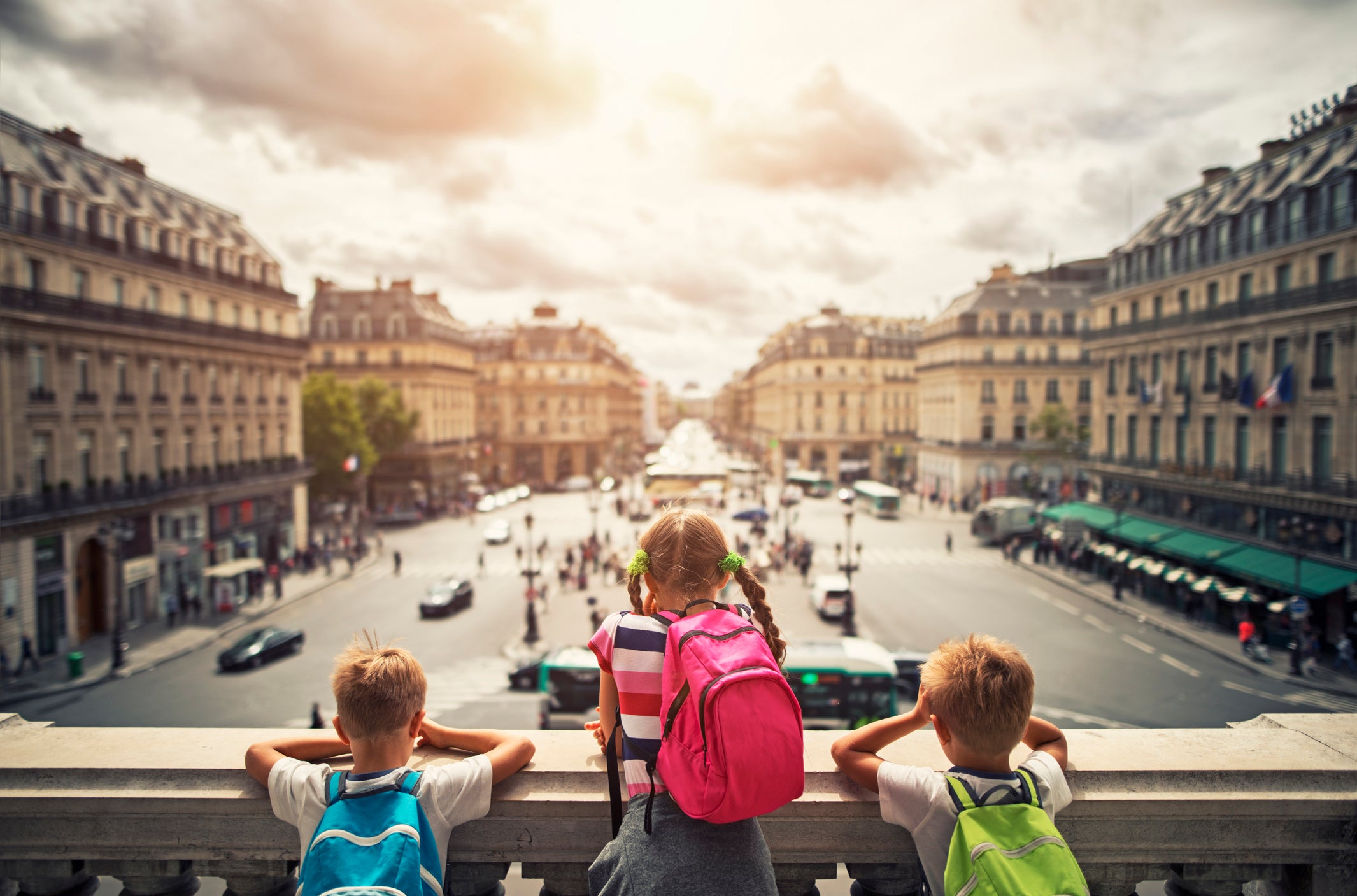 The City of Light isn’t all about expensive art attractions, romantic restaurants and luxury shopping. There are plenty of things for kids to do in Paris — both indoors and out — that celebrate history, the Seine's active waterfront and, yep, even trips into a few museums.

If your travel dates are flexible, try to be in Paris on the first Sunday of the month because that’s when a bunch of museums offer free admission. The savings for a family can be substantial. For example, the Louvre normally charges €15 to €17 ($17 to $19) per person for admission, so that’s a potential savings of €60 to €68 ($68 to $77) for a family of four. Just be wary of increased crowds that can come when prices drop. See this complete list of Paris museums offering free entry.

But, if your kids will throw a tantrum at the mere mention of a museum, here are 10 more free (or nearly free) activities in Paris for little ones, tweens and teens.

Paris Attractions for Little Ones

Due to Paris’ many playgrounds, open spaces and parks, your little ones can easily run and roam, between museums, meals and other stops. Take advantage of all that green space for a European vacation the whole family can enjoy.

In the elegant, very manicured green space that used to be home to the Royal Palace is a trampoline playground perfect for little ones. You can find it near the park’s southern entrance. The park is adjacent to the Louvre and the Musée d’Orsay, functioning as a nice break between museums. (Rue de Rivoli, Ile-de-France, 75001 Paris)

Because admission to this museum — which celebrates all things chocolate, including cultural history and the production process from cacao bean to chocolate bar — is free for kids under the age of 6 (adults, €11/$12.50; and kids between 6 and 12, €8/~$9), a family with little ones can save money. This kid-friendly museum features a treasure hunt in the museum, dedicated workshops for children 6 years of age and older (including a tutorial in making chocolate) and an educational booklet to use during the visit. Did we mention you also get to taste the chocolate? (28 Boulevard de Bonne Nouvelle, 75010 Paris)

Père LaChaise is no normal cemetery. Not only is it sizable (and Paris’ largest), it's a hilly, green, park-like setting in the 20th arrondissement (French for neighborhood), sometimes called Ménilmontant. This spot is popular with tourists in search of the graves of famous residents like Jim Morrison, Edith Piaf and Oscar Wilde, but young ones can easily enjoy lots of room to stretch their legs while learning about some of the greatest folks to ever live in Paris. (16 Rue du Repos, 75020 Paris)

With the sole purpose of putting on contemporary-themed puppet shows for kids, some performances at Atelier de la Bonne Graine are designed for those 6 years of age and under while others aim to attract kids as old as 10. Shows charge €9 (~$10) for kids and €10 (~$11) for adults. Check the theater’s website for its current schedule. (16 Passage of the Good Seed, 75011 Paris)

Everybody loves ice cream and sorbet, right? Berthillon dates back to 1954, to a shop that’s still in the same location on Île Saint-Louis (Hint: it’s very close to Notre-Dame de Paris, on an adjacent island in the Seine River). (29-31 rue Saint-Louis in the island , 75004 Paris)

Tweens can be tough to please, but this is a great age to introduce your tween to France's capital city. Soak up the ambiance at one of Paris’ many plages (French for “beach”), along the banks of the Seine come summer (July through September).

Taking a free Seine River cruise to the mall (Le Millenaire) is an activity that can satisfy both you and your shopaholic tween. Simply hop the boat from Corentin Cariou Métro station to Aubervilliers, immediately north of Paris, and you’ll be whisked away to the shopping center. Of course, you are under no obligation to buy anything. Window shopping is never a bad idea. View the boat's schedule.

Entrance to this basilica in Montmartre is free. Construction began in 1875 and was completed by 1914. Hours are 6am to 10:30pm, giving you plenty of time to drop by. Download a free Sacré-Coeur audio guide to your smartphone to enrich your visit. After, browse the streets of Montmartre: its cafes, which attracted famous artists like Monet during the Belle Epoque (late 1800s) are quintessential Paris and populated by locals. Tweens might recognize the neighborhood from films, such as the 2017 Disney remake of “Beauty and the Beast,” “Moulin Rouge” or “Amélie." (35 Rue du Chevalier de la Barre, 75018 Paris) (Don't miss these other recognizable Paris landmarks either.)

If your child plays a musical instrument, or simply loves to listen to music (whether pop artists or classical music), the Cité de la Musique is a great place to wander and learn. It's home to around 1,000 musical instruments. Admission is free to anyone under the age of 26. There are also guided visits, plus workshops that not only teach how to play certain instruments but also how to listen to music with deep appreciation. There are also storytelling activities designed for families that charge a modest fee of €8 (~$9) for kids and €10 ($11) for adults. (221 Avenue Jean Jaurès, 75019 Paris)

Just like when you were a teen, Paris is the epicenter of fashion and home to “all the cool kids.” There are ways to show this to your teen while still weaving in culture and history, if you know where to look. Consider exploring arrondissements through Paris’ low-cost bike-share program, called Donkey.

Built between 1162 and 1345 on Île de la Cité, this French Gothic cathedral is open from 7:45am until 6:45pm. If you’ve got a budding historian eager to connect the dots between what’s learned at school and their time in Paris, arrive at 2:30pm on Monday, Tuesday and Saturday; or at 2pm on Wednesday, Thursday and Friday for the free English-language tour. (6 Parvis Notre-Dame - Pl. Jean-Paul II, 75004 Paris)

While children of all ages will marvel at the glam inside author Victor Hugo’s former home in Place des Vosges, older kids will likely have more patience to appreciate the details. The best part is that the entrance fee to view the permanent collection is free, with an additional €5 to €7 ($6 to $8) for temporary exhibits. Hugo’s most famous work is Les Misérables, so if you’ve got thespian kids, they will love this. (6 Place des Vosges, 75004 Paris)

Paris often gets the rap for being pretentious and unfriendly, but as long as you try to speak the language (as in, greeting people with bonjour), this is a fantastic city for kids. There's an abundance of parks, accessible culture and walking opportunities. All you have to do is bring an appetite, comfortable walking shoes and a list of must-dos. Don't forget to also explore off the beaten path.

Need a place to stay in Paris? Check out...

Related stories
Flying Blue finally fixes its award search, making it easier to book award tickets
Newark's gorgeous new terminal just got delayed into 2023
The best credit cards for paying your cellphone bill
Why you should consider having both the personal and business Amex Platinum cards
Featured image by Getty Images