This cruise ship has a submarine; here's what it's like to be 1,000 feet under the sea

Articles
Ashley Kosciolek has spent more than a decade writing about travel, with particular emphasis on cruises. Her favorite cities include London; Amsterdam; Krakow, Poland; Phnom Penh, Cambodia; Dawson City, Yukon; and anywhere known for outstanding pizza and theater. You can follow her daily exploits, both at sea and on land, on Instagram or Twitter @slyjabroni.
Follow
Oct. 02, 2022
•
9 min read 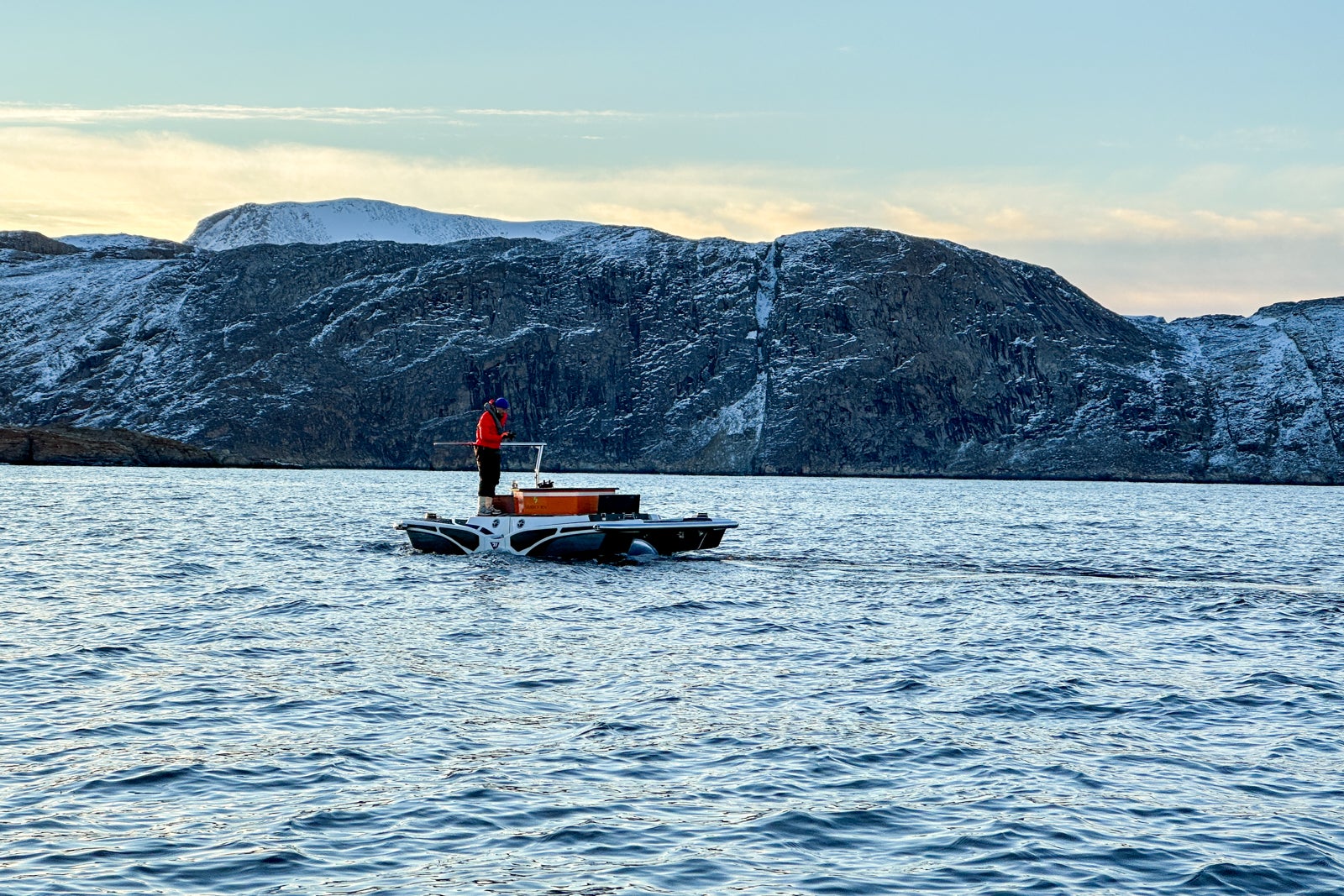 TPG's Ashley Kosciolek was hosted by Seabourn Cruises for an Arctic expedition sailing on Seabourn Venture. The opinions expressed below are entirely hers and weren't subject to review by the line.

"A spot just opened up on the submarine for this morning's dive," Seabourn Venture's expedition coordinator, Chris, announced when I answered my cabin phone on Seabourn Cruises' Seabourn Venture. "Can you be here in 5 minutes?" I had just woken up, but the news jolted me like a double espresso. I don't think I've ever gotten dressed so quickly in my life.

Venture, the first expedition ship for the luxury cruise line, is outfitted with two submarines, and I was on my way to board one of them for a 30-minute dive to the bottom of the ocean in the frigid Arctic waters of Greenland.

Each submersible is capable of diving nearly 1,000 feet below the surface, holds six passengers (plus a pilot) and offers nearly 360-degree vistas through giant glass domes that look like massive bubbles or, perhaps, the bulging eyes of a fish.

I was a bit nervous when I found out we had to climb onto the sub via Zodiacs — small, inflatable open-air boats — but the process turned out to be relatively painless and well worth the effort. So, what, exactly, is the submersible experience all about? Here's all you need to know.

After I got the phone call that a spot had opened up, I headed downstairs to the meeting area, not totally sure what to expect. I had thrown on several layers, even though I assumed the submersible would be temperature controlled (and it was). However, I hadn't realized we would have to take a Zodiac to get there. As I stepped off the ship and onto the smaller boat, I silently thanked the universe that I had worn a hat, gloves and wool socks.

A trip of less than 10 minutes brought us to the sub, which was bobbing nearby.

"Please take off your parkas and leave them in this dry bag," our Zodiac driver instructed us as she tied the boat to the sub. The scene became a flurry of swishing neon orange as everyone began shedding their outer layers — waterproof Helly Hansen jackets provided to all passengers at the start of the cruise. Bright colors reflect on the glass and make it more difficult to see, our driver explained. Our hiking boots came off next in an effort to keep the sub's pristine interior impeccably clean.

Then the crew helped us step onto the sub's roof, one at a time. We sat down, turned around and slowly lowered ourselves down inside the hatch with the help of a tiny, collapsible ladder.

Once inside, we could sit on either side of the sub; each had three comfortable leather seats that swivel so you can see out the large windows. When the process was complete, the pilot boarded, and we settled into our cozy new surroundings for our trip.

To kick off the dive, the pilot gave his initial readings to a crew positioned on a second Zodiac on the surface. That same team checks in every 15 minutes (generally once per dive) to take additional readings and make sure contact with the pilot is maintained. The hatch was sealed, and down we went, expressing the air from the sub's air canisters to help us sink.

Within a few minutes, we gently touched down on the bottom, against one side of a rock face. The view was cloudy most of the way, thanks to silt from nearby glacier runoff, but as we reached the bottom, the view was clear.

The pilot turned on lights to help us see better, and immediately we were surrounded by tons of tiny, krill-like creatures that the pilot said are simply called Arctic fish. Drawn to the light, they were joined by small, bioluminescent jellyfish. The only other life I spotted were a few tiny starfish and some pretty pink anemones — but for me, just being there was enough of a treat to justify the cost and the effort.

After about 20 minutes of viewing from the same spot, the pilot slowly returned us to the top, the water around us progressively turning lighter and lighter shades of sea foam green. When we surfaced, the pilot had the sub blow bubbles so the Zodiac team could spot us for passenger extraction and pickup. When the Zodiac arrived and tied up alongside, the pilot opened the hatch, warning us that our ears might pop a little (which they did).

We climbed back up the ladder, one at a time, in our sock-clad feet, and eagerly grabbed our jackets and shoes for the return trip to the ship.

How much does it cost to ride in the Seabourn Venture submarine?

Submarine ride prices fluctuate by demand and itinerary, but the cost to book for a single person on my sailing was $899 — nearly $30 a minute. Given how exclusive the experience is, and that a submarine ride is a bucket-list activity, many passengers were willing to fork over the dough.

Which cruise ships have submarines?

Should I make cruise ship submarine reservations in advance?

Absolutely. If a sub dive is something you're interested in, make reservations in advance if you can. While not every line allows advance bookings for the subs, the ones that do often extend discounts for those who plan ahead.

Since each sub holds such a small number of passengers, there's extremely limited capacity available. Dives are often canceled if weather conditions aren't near perfect, meaning even fewer people will have a chance to go. Plus, with all the moving parts on each submarine, there's a chance one won't be functional (as was the case on my cruise), so the number of people who get a ride could be even fewer.

Fun facts about the submersibles

Is a submarine dive on a cruise ship worth it? It's completely your call, but it's definitely an exclusive experience with a high price tag. Although it's a lot of fun, unless you're super into the technology aspect alone, it's likely a better value in a warmer destination like the Caribbean or Galapagos where there are larger, more colorful marine animals to see.

Also be prepared for cancellations, which make reservations for this high-demand activity even more coveted. Make your reservations well in advance if possible, which could score you a discount.

If you're someone who's claustrophobic or if you can't climb up and down a small ladder, this activity is one you'll want to skip.

Related stories
Use these shopping portal bonuses to earn extra miles this holiday season
Using miles and points to book airline tickets and hotels for others
Maui magnificence: A review of Kaanapali Alii, a Destination by Hyatt Residence
Target’s big annual gift card sale is this weekend
Featured image by ASHLEY KOSCIOLEK/THE POINTS GUY
Editorial disclaimer: Opinions expressed here are the author’s alone, not those of any bank, credit card issuer, airline or hotel chain, and have not been reviewed, approved or otherwise endorsed by any of these entities.