5 destinations where you can learn about Black history in America 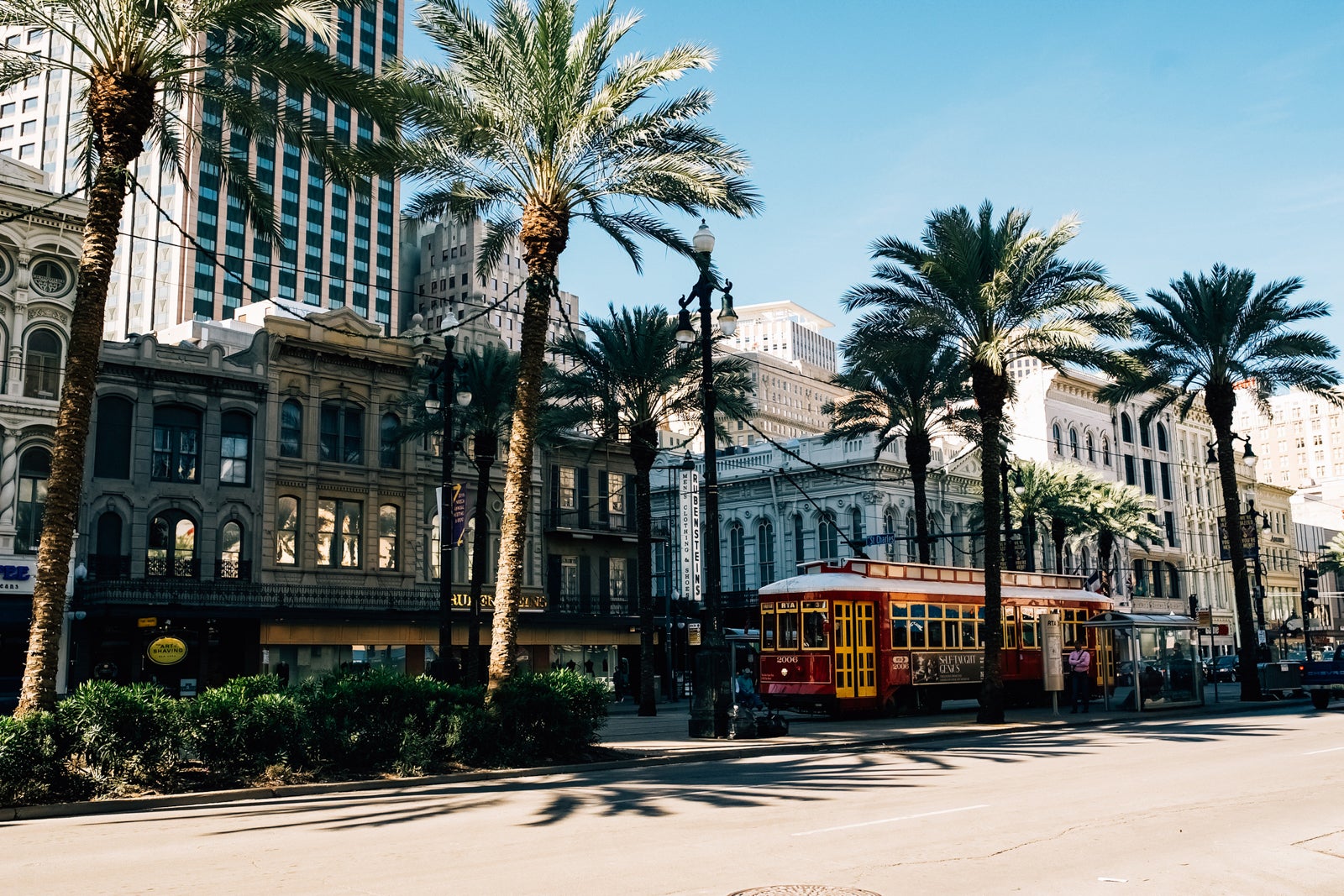 Oftentimes when we are taught about Black history, it’s either whitewashed or repeatedly uplifts prominent figures such as Rosa Parks, Thurgood Marshall, Ella Fitzgerald and Jackie Robinson. And while these trailblazing women and men have made legendary contributions to the way we live today, in every city throughout this nation we can find many more legendary trailblazers that shape Black culture, life and history.

February is Black History Month, an annual observance that commemorates the triumphs and hardships of African Americans. It's an opportunity to learn more about Black history and culture and the ways it shaped America. Plan your next trip to one of these locations to experience the contributions of Black women and men.

How can we start a travel guide without including the Crescent City? From jazz music to Creole cuisine, Black people have a rich tapestry in the bayou. (Speaking of music: Although not on this list, Nashville’s National Museum of African American Music is worth a stop if you’re passing through town.) There’s no better place to start than the McKenna Museum of African American Art. The museum houses a private collection of documents, artifacts and art that immerses viewers in Black excellence from the 18th century to the present day.

Next up, Le Musee de f.p.c. is a historic house museum, and happens to be one of the few attractions dedicated exclusively to preserving the material culture of and telling the story of free people of color. Also owned by the McKenna family, Le Musee de f.p.c houses a collection of documents, paintings and decorative arts that simultaneously interprets and preserves the history and culture shared by so many free people of African descent in New Orleans and throughout the country.

Another historic landmark to add to your list is Congo Square, formerly known as Place de Negres. This area is known for being a gathering area of slaves, who on Sundays would spend their day off selling goods, singing and playing music.

Who can come to New Orleans and not have the cuisine that inspires recipes around the world? After opening in 1941 as a sandwich shop, Dooky Chase’s Restaurant quickly became the meeting place for civil rights, music, entertainment and culture. Leah Chase, known as the Queen of Creole Cuisine, turned the shop into one of the first African American fine dining restaurants in the United States. Additionally, by adding the work of Black artists to the walls of the restaurant, Dooky Chase’s was the first art gallery for black artists in New Orleans.

Related: The first-timer’s guide to New Orleans: Everything you need to eat, see and do

Although some of the best Mardi Gras celebrations happen in New Orleans and other parts of the Gulf Coast, its origin can be documented in Mobile, another city rich in Black culture and history.

Just a few miles from the downtown area is Africatown, formed by 32 West Africans who were the last known shipment of illegal slaves to the United States. This historic site is a part of Mobile’s African American Heritage Trail.

While in Mobile, visit the National African-American Archives & Multicultural Museum. This museum, now under governmental leadership, formerly served as a public library for the African American community during segregation, when Blacks were unable to use “whites only” facilities.

Mobile is also the birthplace and home of baseball legend Hank Aaron, who passed away in January of 2021. His childhood home — which was moved to Hank Aaron Stadium — can be toured for free. In 2013, the Hank Aaron Childhood Home and Museum was voted the eighth-best baseball museum in the country.

Established in 1891 and the No. 1 HBCU in the United States, North Carolina Agricultural and Technical State College is located in Greensboro. This illustrious university has a long-standing history and significant role in civil rights for African Americans.

Related: 4 road trips you can take from Charlotte

On Feb. 1, 1960, Jibreel Khazan (then known as Ezell Blair Jr.), Franklin McCain, Joseph McNeil and David Richmond, four freshman students at A&T College, helped initiate sit-in demonstrations. The sit-in occurred at Woolworth when the four sat down at a whites-only lunch counter. They became known as the A&T Four, and their nonviolent protest propelled a wave of similar sit-ins that ultimately played a key role in ending segregation in North Carolina and across the South. The site is now a historic landmark that gave birth to the International Civil Rights Center & Museum, which refers to itself as “an innovative social justice educational organization devoted to the understanding and advancement of civil and human rights at home and around the world.”

In a wooded area of the Guilford College campus is a path traveled by many seeking freedom, also known as the Greensboro Underground Railroad. Visitors are able to take the path to the “Underground Railroad Tree” in a self-guided tour that provides a simulation of how fugitives navigated the area with the help of abolitionists and local African Americans, both free and enslaved.

When we speak about Black history, it’s important to remember how multifaceted this history is, and it would be remiss to leave out the heroic actions of Black people who shaped the progression of LGBTQIA+ rights and freedoms.

One such heroine is Jewel Thais-Williams, a nightclub pioneer who opened Jewel’s Catch One bar in Los Angeles in 1973. Her establishment was hailed as an “epicenter for gay Black life,” serving as a safe space for gay Blacks to let loose and be themselves at a time when police were arresting people for their sexual preferences. While the establishment has changed to fit the times, it is still open.

Opened in 1997, the African American Firefighter Museum pays homage to Black firefighters, including Sam Haskins, who was listed as the first Los Angeles fireman of African lineage when he was hired in 1892. With an array of documents, equipment, artifacts, photos and stories to tell, the AAFFM stands as the first and only free-standing African American firefighter museum in the country.

No trip is complete without a visit to the city’s best cafe or diner. In Los Angeles, that will lead you to Watts Coffee House, a venue that sought to revive the historic Watts Happening Coffee House. Watts Happening became a gathering place for artists and activists following the Watts Rebellion in 1965 when the neighborhood was burned to the ground in response to the arrest of a Black man by white law enforcement. Located just across the street from the original location, the current coffee shop holds true to the art, legacy and stories of those that created Watts Happening.

Related: From Santa Monica to Burbank: 15 Los Angeles hotels you can book on points

Starting as a small luncheonette with only six booths and 15 stools in 1962, the legendary restaurant Sylvia’s in Harlem is known as the Queen of Soul Food. Garnering the attention of foodies, politicians, celebrities and television shows alike, this establishment has been a staple in the Black community.

Famous African American poet and author Langston Hughes is one of the most iconic people credited with being a part of the Harlem Renaissance. His home, where he spent his last 20 years of life creating some of his most popular literary works, is a registered historic landmark in Harlem. While open to the public for tours and viewings, Hughes’s residence is also home to the I, Too, Arts Collective, a nonprofit organization committed to nurturing creativity within underrepresented communities.

Opening its doors to Black people in 1934 with weekly talent shows, the famous Apollo Theater birthed the careers of some of the world’s most famous entertainers (including Marvin Gaye and James Brown), quickly becoming the go-to place for live entertainment.

Related stories
Bask Bank raises the mileage earning rate on its AAdvantage savings account — what you need to know
Targeted Premier 1K members eligible for bonus miles when checking in and checking a bag on the United app
Current airline elite status match and challenge options you should know about
Business-class deals are back: This month’s Flying Blue promo awards
Featured image by Getty Images/Cavan Images RF
Editorial disclaimer: Opinions expressed here are the author’s alone, not those of any bank, credit card issuer, airline or hotel chain, and have not been reviewed, approved or otherwise endorsed by any of these entities.