Want to upgrade your American Airlines flight? Here are the international routes to book 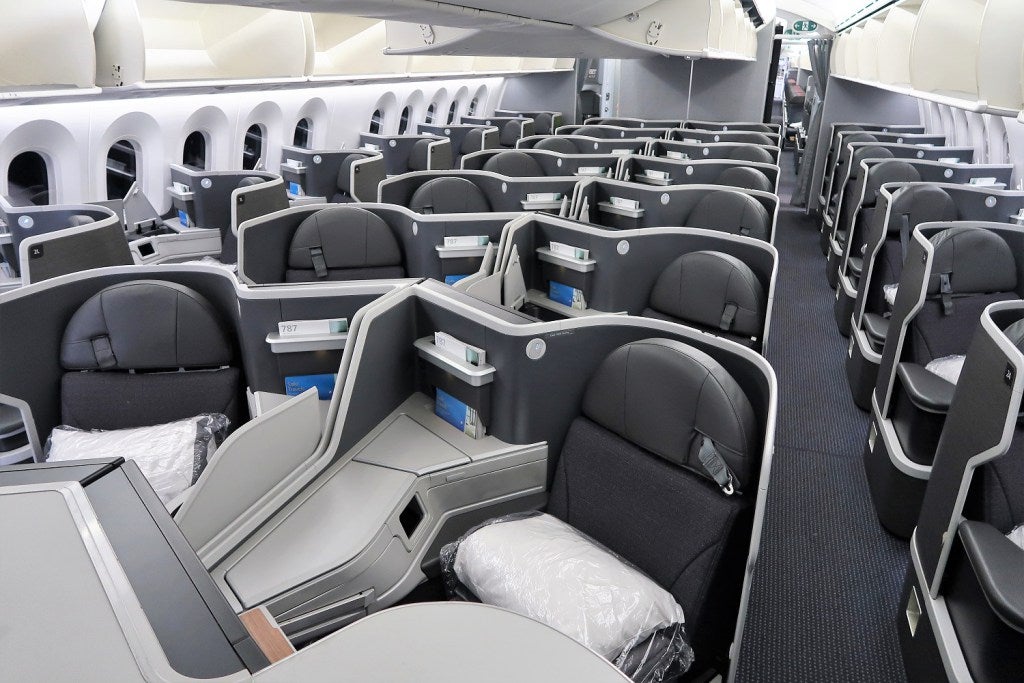 There are many ways to get solid value from the American AAdvantage program. One is the ability to upgrade any paid ticket (other than Basic Economy) using miles or Systemwide Upgrade Certificates, which are awarded to the carrier's top-tier Executive Platinum members. The more discounted economy tickets do require a cash copay if you are upgrading with miles, but this can still be a great way to score a long-haul, business-class flight at an affordable rate. (Using an upgrade cert does not require a cash copay)

And since American's upgrade fare class (C) is different from its award fare class (U), availability tends to be much better.

Get points and miles coverage like this delivered to your inbox by signing up for the TPG daily newsletter.

Upgrading a flight with miles may be even more important given the recent addition of web special pricing across American's entire route network. It's a lot more palatable to redeem 25,000 miles plus a few hundred dollars for a business-class seat than parting with up to 480,000 miles for a one-way flight in the same cabin.

But just how likely are you to find upgrade space? Are certain routes or departure gateways better?

We set out to answer that very question here at The Points Lab.

Before getting into what we found, let's start with the methodology for this analysis, which began with ExpertFlyer (a site owned by Red Ventures, TPG's parent company). We looked back at historical search data for American's long-haul, business-class upgrade inventory (the C fare class) from Aug. 1, 2019 through Dec. 31, 2019. In all, this covered a grand total of over 2.2 million data points across nearly 50,000 unique flights — defined as a specific departure on a specific route on a specific date. It also represented every one of American's U.S. gateways with at least one long-haul, international flight:

For three of these airports (BOS, PHX and RDU), this consisted of just a single flight — to and from London-Heathrow (LHR). However, the rest offer multiple destinations around the globe, from Shannon (SNN) to Sydney (SYD), Athens (ATH) to Auckland (AKL), and everywhere in between.

We then used these data points to identify the likelihood of a flight having business-class upgrade space, expressed as a percentage using the following formula:

READ MORE: Ultimate guide to getting upgraded on American Airlines

Intrigued? Read on for what we found.

First, it's quite interesting to see the most popular city pairs that AAdvantage members search and/or set award alerts on ExpertFlyer, though most aren't shocking by any means. Here's a list of the top 10 most frequently-searched routes from Aug. 1 through Dec. 31:

Four routes to London plus some of American's longest and most desirable flights (Sydney, Hong Kong and Auckland) are definitely ones that you'd expect, though it's fascinating that Miami to Buenos Aires is so popular.

Now let's dive into the overall success rates we found across the entire network of American-operated flights:

While American uses a number of different regions to calculate award rates when you go to redeem miles, there's much more consistency when it comes to using miles to upgrade a paid ticket. Every, single long-haul destination requires the following rates to upgrade to business class:

However, for the purposes of this analysis, we wanted to see if there were any notable differences when looking at the broader regions for upgrades, which we defined as Europe, South America, Asia and Australia/New Zealand. Here are the success rates from the data:

As you can see, Europe stands well above the other regions in terms of success rates. Across 900,000+ data points to or from European destinations, more than a third of those unique flights came back as successful at least once — a notable increase compared to the broad success rates mentioned previously. And even though the other regions were much smaller, none fell below 17%.

Generally speaking, this fits with what you'd expect. Flights from the U.S. to Europe and back are plentiful, and with low-cost carriers like Norwegian and La Compagnie in the market, competition can be fierce. The other regions tend to have high demand but a more restrictive supply of flight options, and scoring premium-cabin award seats on nonstop flights from the U.S. can be exceedingly challenging. As a result, you'd expect success rates to be lower.

What about departure gateways in the U.S.? Are there notable differences? The answer is a resounding yes.

For the purposes of this analysis, I've left off the three airports with a single, long-haul flight operated by American, simply because it's not an apples-to-apples comparison. Claiming American's overall upgrade inventory is best from Boston (BOS) — which is true, based on this data — isn't very beneficial to an award traveler when there's just one daily flight to London.

That being said, here are the overall success rates for Boston, Phoenix and Raleigh-Durham (in both directions):

As you can see, New York-JFK tops this list by a relatively wide margin — nearly double that of the next best airports (Chicago-O'Hare and Dallas-Fort Worth). Those three gateways are the only ones with overall success rates higher than the overall average of 29.6%, though Los Angeles isn't far behind.

But where did the individual routes fall?

Now let's shift to individual routes that offered the highest success rates for C-class searches. If you're hoping to put your hard-earned miles to use — or have access to one or more SWUs — these are the 14 best long-haul, international routes for upgrades on American, all of which had overall success rates over 40%.

For starters, it's worth noting that I included the number of data points and unique flights here to add some context for these percentages. I'm particularly concerned about the BOS-LHR route, which had a high success rate but less than 500 data points across fewer than 200 unique flights — a major drop compared to the comparable data density on JFK-LHR and DFW-LHR (for example).

A few other trends jump out:

If you want to look at the data for every route, you can download the full spreadsheet at this link. Note that I've set this up so you can easily sort and filter the results based on airport or success rate.

Now let's shift gears and look at the bottom of the list. Here are the 14 routes with the lowest success rates of the 2.2 million+ data points we evaluated, each of which had a combined rate of less than 10%:

This list is equally (if not more) fascinating than the top destinations. Even though Europe is the clear winner among the regions, 12 of the 14 least successful routes are also European cities. And there wasn't a clear gateway that led the way in terms of low success rates. You had Philadelphia with five, Charlotte and Chicago-O'Hare with three each, Dallas-Fort Worth with two and Los Angeles with one. The only major hub without any on this list was JFK.

Note as well the low numbers on the DFW-TLV route, which isn't surprising at all. American just opened reservations on this route in October 2019, and the inaugural flight won't launch until Sept. 9, 2020. We'll likely see additional successful searches for business-class upgrade space as those flights get closer.

Finally, it's worth noting that Athens occupied the top two worst routes (from Chicago-O'Hare and Philadelphia) — the only American flights to Greece. In addition, three flights to Barcelona also grabbed spots in the bottom 14. Compare that to JFK-MAD and JFK-BCN, both of which earned spots on the list of best routes. In other words, if you're hoping to upgrade your American flight to Spain, consider focusing on flights out of JFK.

Amazingly enough, what many travelers think of as American's "premium" routes didn't appear at the bottom of the list. Los Angeles to Sydney was only the 34th worst route for upgrades (16.4% success rate), while the carrier's nonstop flight to Auckland was actually the 23rd best for upgrades (32.5%). Even the two routes to Hong Kong came in with above-average success rates:

I would've guessed that those routes would've easily earned a spot in the lower tier, but the data shows that these upgrades aren't as hard to find as one might think.

Again, feel free to download the spreadsheet we've created with all routes at this link.

All of the above data paints a clear picture of historical trends with American Airlines upgrade inventory, but there are a few important caveats to keep in mind. First, because this is based on a series of flights over an extended time period, there's no guarantee that it accurately reflects upgrade inventory at a single point in time. It does give you a solid idea of how likely you are to find upgrade space from a given airport or on a specific route, but the success rates don't indicate current award space right now.

In addition, the sample sizes for certain routes may not be large enough to paint a true picture of upgrade inventory trends. I feel much more comfortable drawing conclusions about LAX-SYD, with nearly 220,000 searches, than I do with BOS-LHR and its 457 searches. If you're looking at a route with a very low number of data points (comparatively speaking), be sure to take the resulting success rate with a grain of salt.

Finally, it's important to point out that all of these numbers may be artificially deflated. Even though we looked at searches conducted from Aug. 1, 2019 through Dec. 31, 2019, we included data points across all possible dates of flight operation. As a result, a flight that took off on Jan. 15, 2020 may have never had a successful upgrade search through Dec. 31. However, a successful, C-class result on Jan. 2 would've boosted that route's success rate.

American's business-class product may not be cutting-edge, but it still provides a comfortable way to travel internationally. While regular award seats are typically hard to find, upgrade inventory is generally better — though as you noticed above, there's a great deal of variation as you look across different organization of the data.

In summary, London is likely the single best destination for scoring an upgrade, and New York-JFK is the U.S. departure gateway with the highest chance of a jump to the business-class cabin. Europe as a whole is the best region, though there are many European spots with very low success rates.

Hopefully this data has shed some light on where you're most likely to find upgrade inventory for your next American Airlines trip.