Articles
Summer Hull , aka Mommy Points, ran the Mommy Points site for families who want to travel more for less using miles and points for seven years. She now heads up a variety of special projects at TPG when she isn't exploring the world with her own two girls.
Follow
April 09, 2021
•
7 min read 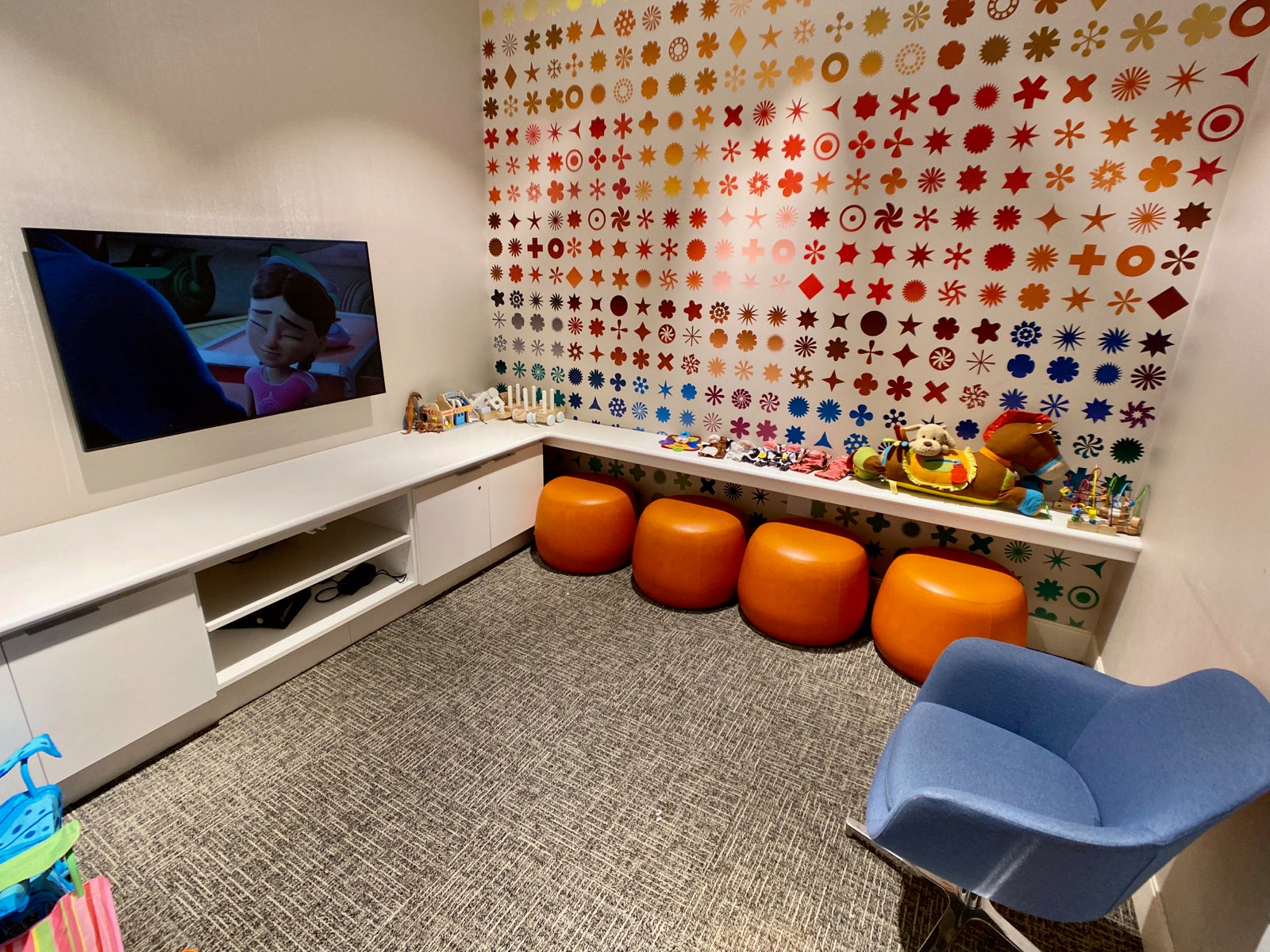 Dear Amex, please don't charge little kids $30 for lounge access
This post contains references to products from one or more of our advertisers. We may receive compensation when you click on links to those products. Terms apply to the offers listed on this page. For an explanation of our Advertising Policy, visit this page.

It was a big deal. Instead of just offering packaged cheese and crackers and $7 glasses of not-so-tasty wine like most U.S. airline lounges at the time, this new lounge had truly delicious included drinks, above-average hot food, comfy chairs and a cool design. It made me fall in love with our Amex Platinum Card that much more.

As a traveling mom of a then three-year-old, what was immediately intriguing was that even that very first lounge -- in Las Vegas no less -- had a nice, colorful, dedicated family room.

A few months later came the opening of the second Amex Centurion Lounge in my home state of Texas at the DFW airport. This even-larger lounge raised the ante again with everything the Vegas location had to offer, plus included spa services, and a family room. Things were going well.

The Centurion Lounge network only grew and became a true card enhancement, not just for when my husband or I would be on solo work trips, but when the whole family was on vacation, too.

While the rules changed a bit over time, you could still bring in up to two guests at no additional charge. Amex had cracked the code of creating lounges that literally everyone from young families on vacation to road warriors enjoyed. There was a bar, a spa, a family room, dining, showers and lots in-between.

And ultimately, that became its biggest problem.

The Centurion lounges, as anyone who visited them frequently pre-pandemic knows, became crowded during peak times. Amex tinkered with access rules, time limits, waitlists and now has really dropped the hammer.

As we learned yesterday, beginning on Feb. 1, 2023, those with The Platinum Card® from American Express or The Business Platinum Card® from American Express will lose the ability to bring in any complimentary guests to the Centurion lounges unless they spend $75,000 per year on their Platinum card. Those big-spenders will retain the ability to bring in two complimentary guests. Amex Centurion cardholders will also retain their guesting abilities.

But for the vast majority of Platinum cardholders with young families, early-2023 will mark the end of an era.

Paying $30 per child, per visit on top of the card's $695 annual fee (see rates and fees) -- which may go even higher if the rumors pan out -- to access a family room and the buffet isn't realistic. It is a sharp left-turn for a network of lounges that once courted families with colorfully wallpapers rooms stocked with toys and games. Times change, priorities shift and clearly, Amex had a crowding problem it needed to solve (even before social distancing was a thing).

But while we can agree on the problem, I'd argue there is a much better way to seek out a solution than to shut the door on most traveling families.

So here's my Hail Mary attempt to rekindle what once was a match made in credit-card-perks-Heaven.

It's been a while -- I know we haven't visited your lounges as a family since November 2019, but we think of you often. (OK, maybe I'm thinking the most of the Chinese New Year drink made with Prosecco, Mandarin Napoleon, Canton Ginger Liqueur and lemon juice we get from the fantastic bartender in the Houston location, but you get the point.)

While we are old friends dating back to your debut day in 2013, I know you have become really popular in recent years and you've become a victim of your own success. I understand some change is needed, but I think you're over-reacting a touch. Charging the same $50 for a visit from a preschooler who just wants to play with toys in the family room and an adult who will make good use of the food and beverages you have to offer seems ... a bit off.

I don't like to complain without offering suggestions, so here are a couple of ideas.

Children are old enough to be authorized users on a Platinum or other American Express card starting on their 13th birthday. Assuming there are no impending changes with authorized users being able to access the Centurion Lounges (please, don't change that), perhaps a natural age cut-off for continued complimentary access could be for children 12 and under. This would allow families to add children 13 and up as paid authorized users who would then have access, and those with kids 12 and under could continue to access the lounge as before.

Another idea would be to build in a certain number of included guest visits per year -- maybe somewhere between six and ten annual guest visits sounds about right. This would allow Platinum cardholders to treat their family once or twice a year or introduce friends to the lounge. Who knows -- they would then want a card of their own.

If you want to add an extra incentive to unlock this perk, you could perhaps open this up to those who spend $10,000 + on the card annually. That's a more attainable tier for many than the new $75,000 threshold you've set for complimentary guests. If that isn't enough to reduce crowding, you could even require advance guest reservations to be made in the app -- we already have our summer vacation travel dates at the ready.

It's always great to be able to grab a hot plate of food and a cool cocktail in the Centurion lounge on a solo work trip, and I'm sure that will be more enjoyable with fewer people in the lounges. But it's also really nice to treat the family to a nice lounge visit a few times per year on a long layover or before a big departure. But as much as I love my Chinese New Year drink, I'm not sure spending $60 total for my 5 and 11-year-olds to go into the lounge with me will ever make sense. I'm also not sure that actually solves your main problem.

In effect, this will block most families from enjoying the lounges on their most meaningful trips of the year.

And while you built lovely family rooms (thank you!), this elimination of complimentary guests will disproportionately impact families with kids under 13 that are too young to become authorized cardholders of their own.

We already haven't been in an Amex lounge in a year-and-a-half, so we'll be fine if we need to stop visiting lounges when this change kicks in as travel ramps back up. But I can't help but think this seems like an unnecessarily harsh break-up with the family when some baby-step options were available in the middle ground.

Thanks for listening and hope to see you again before too long.

Cardmember since 2011 and mother of two

Featured image by Family room (Photo by Zach Griff)
Editorial disclaimer: Opinions expressed here are the author’s alone, not those of any bank, credit card issuer, airline or hotel chain, and have not been reviewed, approved or otherwise endorsed by any of these entities.