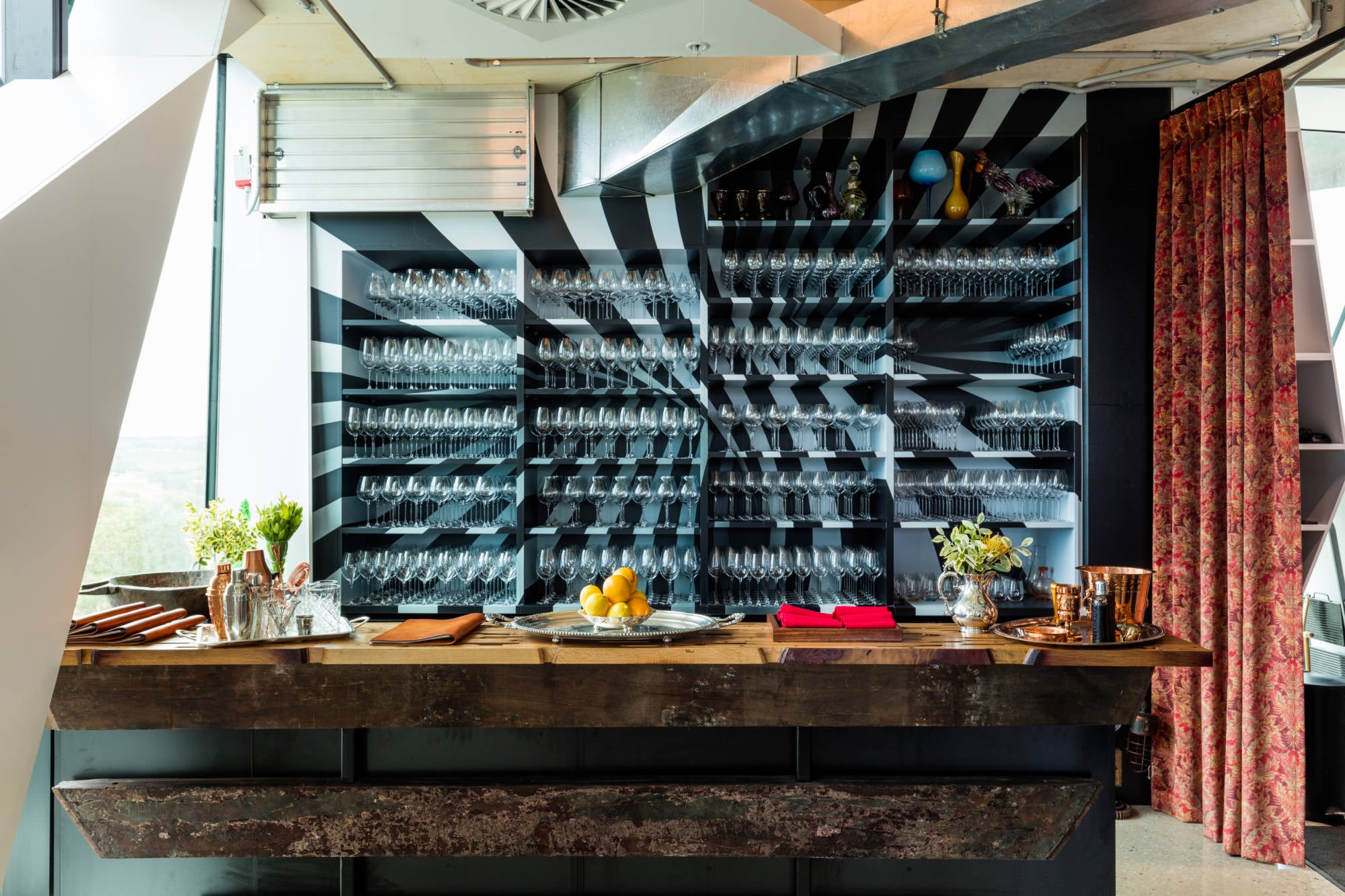 The tapestry of modern cuisine is woven with a thrilling thread of innovation and cutting-edge chefs and bartenders from every corner of the globe are pushing each other further into the future, upping the "wow" factor like never before. If you're wondering where the scene could possibly go from here, a slate of inventive newcomers are here to satisfy your curiosities. Set your seat back to the upright position, stow your tray table; it’s time to explore February’s prime dining destinations.

Where: The St. Regis, Aspen, Colorado

The Gist: If you’re new to the term "Modern Mountain Cuisine," it’s easy to imagine what’s involved. Think game gone gourmet. For a memorable crash course on the matter, head to the Velvet Buck as fast as your skis can carry you there. The rustic, lodge-like interior remains true to its Aspen address, but the kitchen takes the food to another elevation altogether. Signature dishes such as bison tartare in a house-made hollandaise, cassoulet of duck — plus bone marrow reworked into a "beef candle" — will help you ward off a winter chill with the most epic of meat sweats.

The Gist: New York’s freshest new Indian concept is an innovative reimagining of one of the world’s most popular cuisines. Trade in the predictable tandoori and tikka masala for keema pao fixed with ground lamb, and softshell crab bathed in squid ink and mango curry. The playful fusion of the kitchen is mimicked at the bar, where a tidy list of American classics are adjusted to incorporate subcontinental flair; an Old Fashioned marked up with sandalwood syrup, a rye whiskey infused with chai, bourbon mixed with madras coffee. Yet for all the experimentation, there is a welcome familiarity to the approach. It’s obviously Indian, just unlike any that you’ve ever had before.

Jean-Georges at The Connaught

Where: The Connaught, London, England

World-renowned chef and restaurateur Jean-Georges Vongerichten is up to his old tricks in a new setting. This time London gets the fusion treatment, with a menu combining the hallmarks of British pub grub with Southeast Asian favors. Diver scallops come dressed with caramelized cauliflower, the beef tenderloin glazed with miso mustard. A dependable stable of small plates and entrees are plated throughout the day, even assigning a strong weekend brunch game to this luxe lodge in the midst of the Mayfair neighborhood

The Gist: One of LA’s most anticipated openings at the end of last year is hitting full stride in 2018. A verdant interior space covered in floral blooms abuts an open kitchen, where chef Adam Sobel merges nouveau Italian with the farm fresh sensibilities of California cuisine. Amberjack and yellowtail crudos or a unique table-side mozzarella and caviar service are both memorable means to start — but save ample room for the homemade pasta, the restaurant’s pride and joy. In this section of menu you’ll find pumpkin agnolotti — small pillows of light starch, stuffed with dungeness crab, uni, and shaved truffle. An unctuous burst of umami in every bite, it could very well be the best pasta in the city right now. Don’t worry about filling up, either: At dessert, a cart of Italian inspired digestif rolls over, featuring an assortment of amari and the bar’s very own limoncello infusion.

The Gist: Ogden, Utah, is hardly a high profile urban hub. But the charming gateway to ski country is full of surprises. One of the tastiest examples is this soulful standout for southern comfort cuisine. As its name implies, pork is king here, with just about every dish on the menu offending vegetarians in some certain way. But as much as that ham hash or creole pork belly Benedict will make you salivate — even at sight, upon a neighboring table — the eatery’s double-battered, house-brined fried chicken atop waffles is the true showstopper. Head in early for breakfast, then spend the rest of the day burning it all off on the slopes, laying tracks in some of the world’s finest powder.

The Gist: Opened only a month ago, Inko Nito is redefining robata in LA’s ever-evolving Arts District. The grill assumes center stage as star of the show, enveloped by wraparound bar dining. From here, baby back pork ribs are slathered in a Japanese whisky glaze, charred cauliflower is drizzled in a Parmesan panko and the branzino is brought to shine in a citrusy yuzu marinade. And that’s but a small sampling of the draw.

It’d be foolish to miss out on at least one of the restaurant’s four crushable varieties of "nigaki" — simplified sushi assemblies. Doubly so, the kegged cocktails from a concise-yet-thoughtful drinks program. The plum highball, made with Toki Japanese whisky, soda and the namesake purple fruit is even more fresh and vigorous than anything prepared by a live bartender. Adding ease to all that please is an efficient ordering system in which waitstaff immediately pipe orders from table to kitchen via networked iPads. Technology never tasted so good.

The Gist: After opening Dorsey earlier last year, the Venetian continues to define craft cocktail culture on the Strip, this time with Rosina. A stately drinking parlor, just steps off the casino floor, it feels far removed from the jingle-jangle din of the gaming masses. The gorgeous backbar is appointed in all manner of spirit, from Tiki-bound rum favorites to impossibly rare Japanese single malts, fetching hundreds of dollars per two-ounce pour. While odds have it that any of the space’s fresh juice brambles will be just the jackpot you need, you’ll want to save some coin for at least one Mai Tai, served in specially designed island ceramic. If you prefer it neat, the bar’s expansive spirit list is certain to satisfy, with selections poured into vintage rocks glasses, sourced from Japan.

Never forlorn in this town, the bubbly gets special treatment here in the form of a "Champagne Call Button" which allows imbibers to top off their flute in a most novel manner. Blackjack is fun and all, but at Rosina you’re a guaranteed winner.

Where: The Envoy Hotel, Boston, Massachusetts

The key to Outlook’s early success is that it’s eclectic while remaining accessible. The menu reads easy, dividing flavorful components into soups/salads, share plates and more standard-sized fare. Overlooking the city’s bustling Seaport district from inside the sleek lobby of the adjoining Envoy Hotel, you might as well indulge in the maritime specialties on offer. The seared Atlantic halibut —with grilled bok choy — as well as the Georges Bank scallops, in a bed of black lentils, are worth the price of admission. For dessert, head to the roof where the Lookout Bar lays claim to one of Boston’s most Instagrammable seasonal icons: transparent drinking igloos built for large groups of weekend revelers.

The Gist: When Victoria opened along the outdoor veranda of the enchanting Villa Orsula, it became its city’s very first outpost for Peruvian fare. Technically, it’s even more unique: Peruvian-Adriatic fusion. What does that mean? Chef Roberto Chavez will show you in his take on Lomo Saltado atop huancaina risotto, his country’s classic beef preparation, modulated by way of Eastern European accoutrement. Or in a delectable "leche de tigre" sauce — a South American staple of citrus zest and chili spice, used here to enliven local catches. It’s all brought to the plate in succinct style, though you’d hardly notice: Your meal is spent standing guard over the medieval, walled-city of Dubrovnik, a few hundred yards in the not-so-distant backdrop.

The Gist: Is it a restaurant or a Rubik’s Cube? From outside it truly seems as if it could be either. This state-of-the-art, five-story wine tasting facility now holds South Australia's hottest high-end dining, with panorama stretching out over cultivated hills of sloping vines. Most of those grapes are Mourvèdre — a jammy, Old World standby which goes into the glass to pair alongside an artistically assembled tasting menu. It starts at just over $150, all inclusive.