Have a Look Inside the Airbus A321LR Test Aircraft 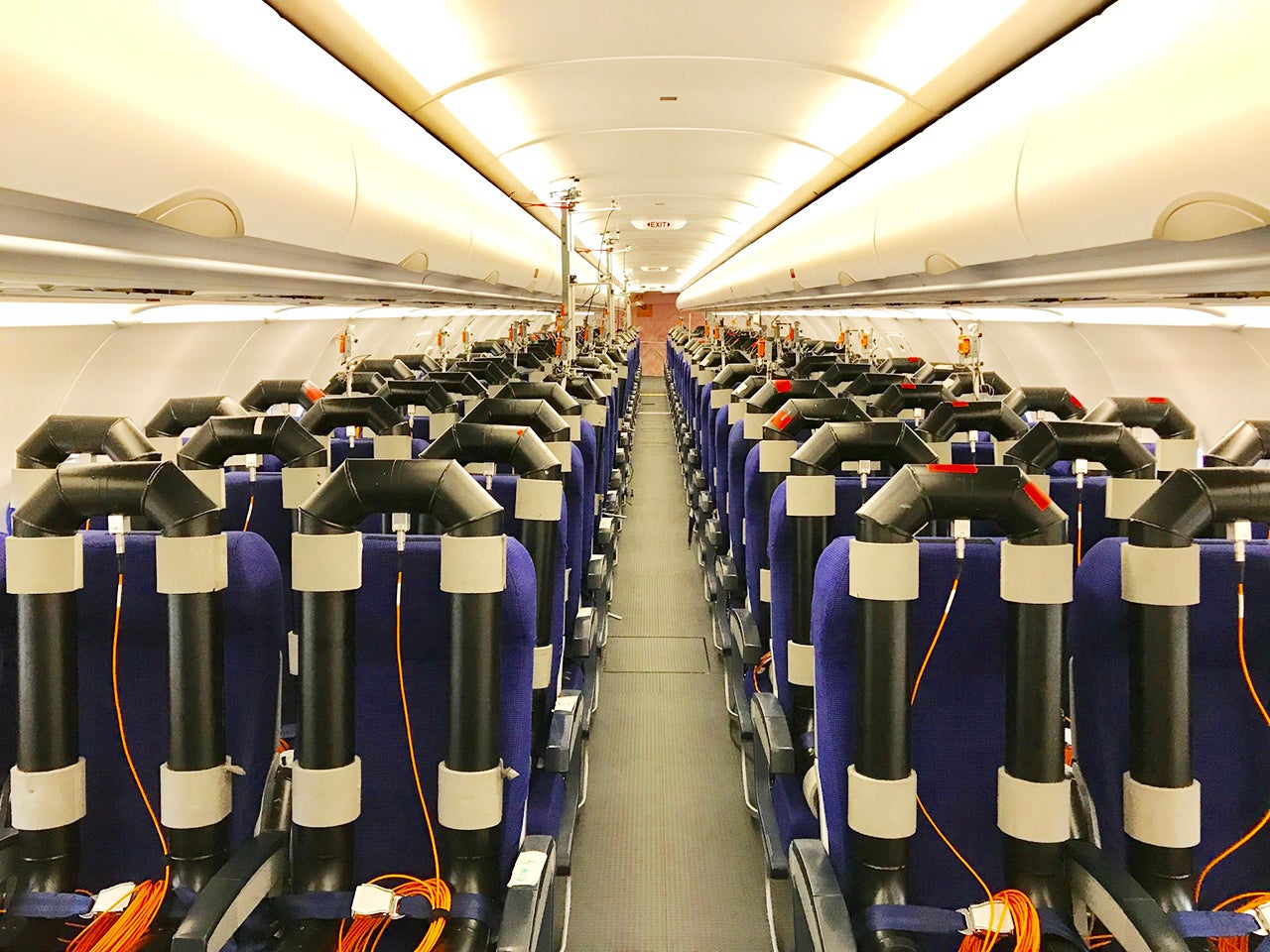 Have a Look Inside the Airbus A321LR Test Aircraft
This post contains references to products from one or more of our advertisers. We may receive compensation when you click on links to those products. Terms apply to the offers listed on this page. For an explanation of our Advertising Policy, visit this page.

The A321LR, Airbus' newest single-aisle jet, has just made its first flight. Before entering service, it's going to go through a cycle of rigorous tests to explore how it fares in any conceivable flight situation. Airbus tells us that the jet will visit the US in the coming weeks in the course of its flight tests.

The new jet has one big selling point: as its LR moniker indicates, it's a long range plane, meant to take up to 240 people on routes up to 4,000 miles. This used to be the province of twin-aisle, heavy jets only, but the A321LR can go far without the added costs of a much bigger airplane.

But before doing any of that in commercial service, it needs to be deemed safe, after a campaign of tests. The A321LR is fundamentally an A321, but with a different door layout and an extra fuel tank, plus several improvements to extend its range.

TPG got a chance to board the first and so far only LR flying in Hamburg, at the Finkenwerder airport (XFW) where Airbus has one of its two European assembly plants. Here it is, sitting on the ramp by an enormous A380 from the latest batch about to be delivered to Singapore Airlines.

The first sign that this is not an A321 like the others is on the flight-attendant panel by the forward galley. The second diagram from the left will strike any crew member (and passengers) used to A321s as weird. There's a door missing! A321s generally have four exit doors forward of the wing and two behind, and no emergency exits over the wing. Not this one. The LR has only one door in front of the wing (it's the one we came through, in red in the diagram to show it's open) but compensates by adding two small overwing emergency exits. That way, it can seat more people than the standard A321 within the same fuselage, and can still evacuate them all safely.

The cabin looks like Airbus is installing some kind of new seat with a weird back, but these are normal seats — with water tanks and wired test equipment strapped to them. The equipment measures and records data in different phases of the flight.

The tanks allow increases or decreases in weight as well as different weight distributions.

The center of gravity is an important aspect of the flight test, and Airbus uses the water tanks to ensure the plane is tested on its ability to cope with potential situations that may see the cabin structure move around, for example in severe turbulence.

The twin emergency exits are now automatic, the first for an Airbus single-aisle aircraft. It means that in the event of an evacuation, a door will pop up, rather than become totally detached and require the passenger to throw it out.

Towards the rear, not something you see every day: the rear pressure bulkhead is exposed. making the rear seem much, much wider than we're used to seeing on a single aisle. This bulkhead helps maintain cabin pressure when airborne, when the cabin is kept at a much lower altitude than the atmosphere outside. Ordinarily, a mix of galleys and lavatories will be in front of the rear pressure bulkhead, but this is a test aircraft, and there are no passengers needing those facilities.

Towards the front of the aircraft, there are a few rows of old, second-hand seats, for those onboard test flights to sit when they aren't busy operating the test equipment. There's also a small exposed galley with limited equipment, and one lavatory. This definitely isn't anything like what you will see once the LR is in service.

The flight deck is pretty much the same you'll see on every other A320 family aircraft...

... but with a difference if you look close, and the center display happens to be turned on and set to show the state of the aircraft's doors: again, there's that lone door forward of the wing that gives the LR away.

And finally, a closeup of the other innovation on this plane: a (very wet) "mask" — the elegant black color around the cockpit windows that debuted on the bigger A350.

This A321LR will continue its flight test campaign for most of the year, before entering commercial service in late 2018 with its launch customer, which for now remains a secret. You can use flight tracking sites like FlightRadar24 to check where the aircraft is being tested: just search for the German test-registration D-AVZO. Heads up: it's headed to the US in the coming weeks!

Our points-obsessed staff uses a plethora of credit cards on a daily basis. If anyone on our team wouldn’t recommend it to a friend or a family member, we wouldn’t recommend it on The Points Guy either. Our opinions are our own, and have not been reviewed, approved, or endorsed by our advertising partners.
See all best card offers
Related stories
Guide
The 18 best places to travel in 2023
News
Flying Blue finally fixes its award search, making it easier to book award tickets
News
Newark's gorgeous new terminal just got delayed into 2023
Guide
The best credit cards for paying your cellphone bill