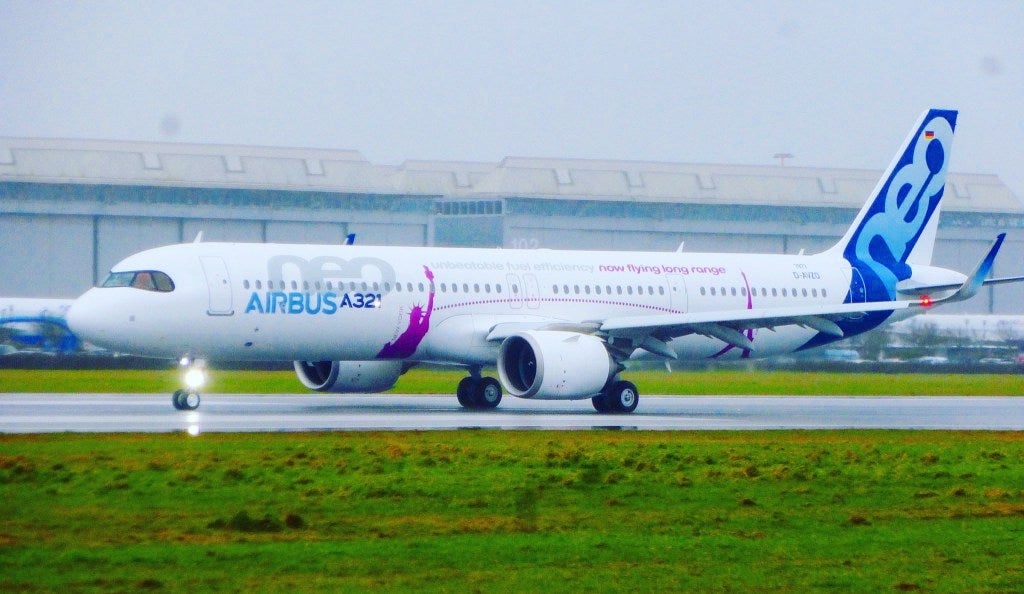 See the Brand-New Airbus A321LR Make Its First Flight
This post contains references to products from one or more of our advertisers. We may receive compensation when you click on links to those products. Terms apply to the offers listed on this page. For an explanation of our Advertising Policy, visit this page.

The newest Airbus jet took to the skies for the first time on Wednesday, and TPG was by the side of the runway as it took off and returned after a successful flight. The brand new, single-aisle jet is the A321LR, for "long range," and it's the largest and heaviest member of the A320 family. Seating up to 240 people, the LR can fly more than 4,000 miles nonstop, enabling to connect the US East Coast and Europe comfortably.

It's also racking up sales in a segment, 200plus-seater sinlge-aisle jets that can cross oceans, where Boeing did not quite have a directly competing product until recently.

The A321neoLR, as it's also called from "new engine option," is also the launch aircraft for the "Airbus Cabin Flex" concept. It's essentially a fuselage modification allowing more space for seats inside a cabin of the same length as before. The most visible modifications are a new rear section, and a new door layout. The classic mark of an A321 are the two doors in front of the wing, whereas all other Airbus single-aisle jets have one. But not on the ACF birds, which have only one but instead feature two small over-wing emergency exits, which the other A321s do not have.

The LR also has a reinforced, newer landing gear to support the increased maximum take-off weight, which has risen to 97 metric tons. The original A321s from the 1990s were 15 percent lighter — the LR can carry more fuel, and has more powerful engines.

The importance of the A321LR is in the fight between Airbus and Boeing for airplanes able to combine the efficiencies of a short-haul jet with the long-haul capability required to connect trans-Atlantic cities where you don't need the big jets. Boeing got to the fight late by stretching even further the 737, creating the 737 MAX 10, which isn't selling as well as the Airbus model. Boeing is also working on an aircraft it calls the MoM or "middle of market" that would compete in very much the same segment, but there is no date for its launch yet.

How does the A321LR fly further? Efficiency modifications make the aircraft physically lighter than previous A321 models, enabling it to carry more weight in fuel, in the form of an additional tank that increases range to 4,600 miles.

However, you may remember that a couple of weeks ago, a regular A321neo, without the extra fuel tank, operated by WOW Air stunned everyone by flying over eight hours from Reykjavik (KEF) to Los Angeles (LAX) — well in excess of the expected range of a normal A321neo. That had people thinking that if a normal A321 could go that far, the LR would be able to go much further than those 4,600 miles.

Wednesday in Hamburg, I sat down with the Head of the A320 Family Program Marketing, Amaya Rodriguez - Gonzalez, who told me WOW Air was able to achieve this by blocking some seats onboard, making the aircraft lighter. Just how many seats, we don't know.

With this in mind, I asked Klaus Rowe, Head of A320 Family Program, just how far the A321LR can really fly.

“We know that the maximum range the aircraft could fly is just short of 5,000 nautical miles, but possibly further," he said. (5,000 nautical miles equals 5,750 statute miles. That means you could get from Los Angeles all the way to Paris.) But, he added, "this would only be a possibility if there was a reduced seat count onboard, and we already have airlines asking us to show them how far an ‘all business class A321LR’ could fly. In fact, we have definite interest from an airline customer for a cabin with only 100 Business Class seats, which could end up flying much, much further” than the officially advertised range.

In terms of passenger capacity, the current maximum is 240 seats, based on seats with 18-inch seat width. “We are working to increase it to 244, for our high density customers," Rowe said.

Confirmed airline customers of the A321LR include Air Transat, Aer Lingus, Azores Airlines, TAP Portugal and Norwegian Air — which all plan on using the A321LR for transatlantic services, between Europe and both North and South America. Furthermore, airlines including Air Mauritius, Swiss, Lufthansa, Austrian Airlines, and Royal Brunei are considering A321LR orders.

Airbus marketing is clearly aiming this one squarely at trans-Atlantic routes, as you can see below.

After around two hours in the air, the A321LR aircraft made its first landing back at Airbus’ German home.

Despite heavy rain, the new jet was greeted by a water cannon salute.

Upon arrival, the flight test crew disembarked the aircraft to cheers and applause.

I caught up with a member of the test flight crew, who said the only "difficulty" was the turbulence on approach, making it a particularly bumpy test flight, but other than that everything had performed as expected.

Rodriguez - Gonzalez also told me that the "mask" around the cockpit, which first appeared on the A350, then the A330neo, and now the A321LR, has become "signature Airbus" meaning that from this month, it’s an option given to all airline customers taking A320 family aircraft. So be prepared to see more "masked Airbus" around the world.

In another post tomorrow, I’ll take you on a tour of the A321LR test aircraft, fresh from its first flight.