Articles
Emily McNutt is The Points Guy's Global News Editor and is based in London.
Follow
Jan. 15, 2018
•
8 min read 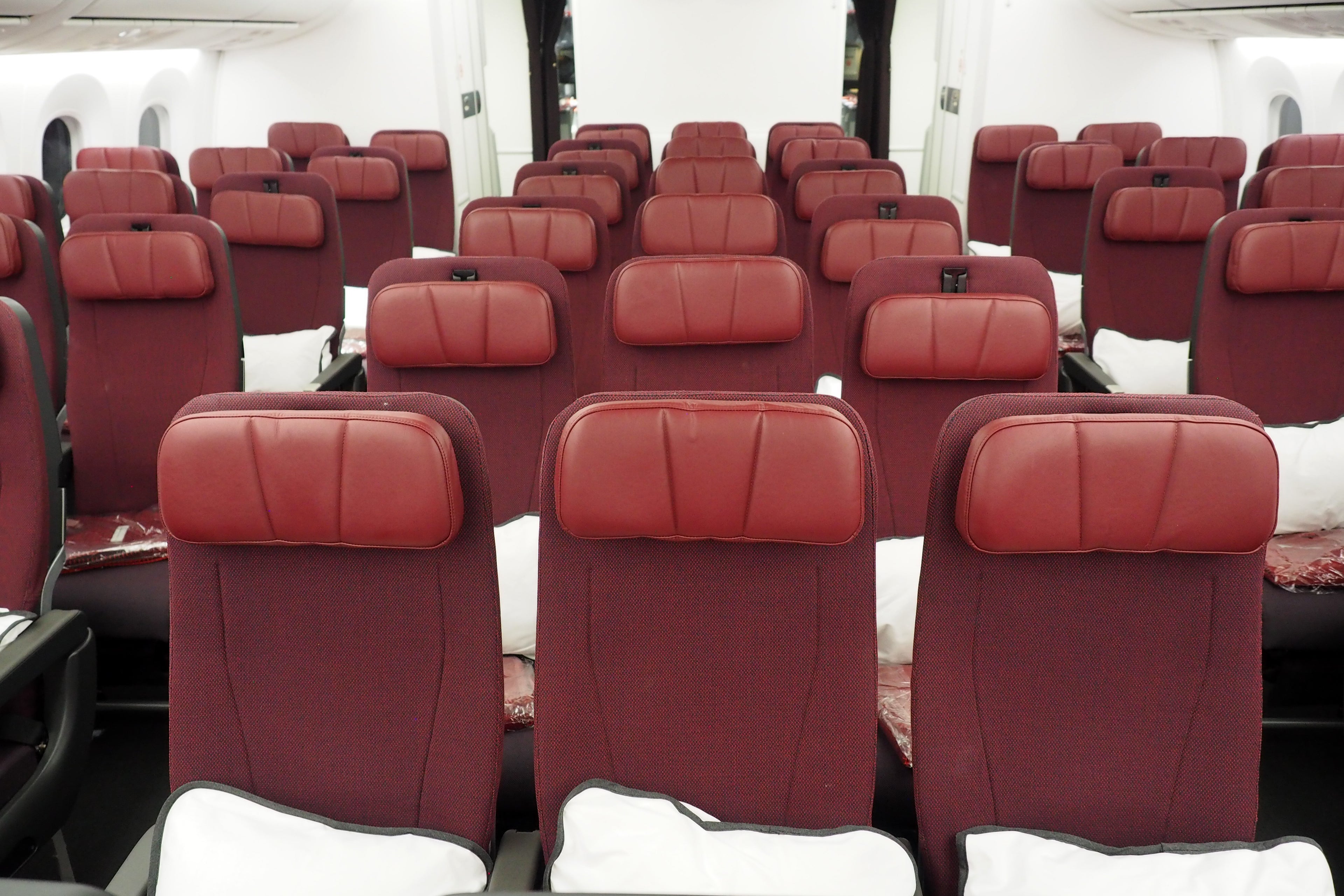 If you're going to be flying on the soon-to-be world's longest flight, you'll want to be comfortable. Imagine being stuck in a seat with little recline for 17 hours between Europe and Australia, nonstop. No thank you!

As Qantas begins to fly its new 787-9 Dreamliner aircraft between London (LHR) and Perth (PER), beginning on March 24, 2018, it'll get the title of world's longest flight. At 9,010 miles, it's a monster flight, but the Dreamliner is well equipped to handle the journey. And since this will be the longest commercial flight, comfort is key. In order to make sure you have the best flight possible, here's what you need to know about where to sit on the aircraft in each of its three cabins.

The business-class cabin has 42 lie-flat seats, which Qantas calls “mini-first.” Each offers a generous 24-25 inches of width and seat pitch of 46 inches. When the seat is in its lie-flat bed position, it measures 80 inches long — or almost 6’7″.

If you're traveling alone, seats on the side of the cabin are best, as you won't have to share space with a seatmate, and you still have direct aisle access. So, pick an A or K seat.

More specifically, if you're traveling alone and want the most privacy, choose an odd-numbered seat in the front cabin. If you're in the second, mini cabin, select an even-numbered seat. If you select one of the odd seats in the front or an even seat in the second cabin, the seat is flush against the cabin wall. The arm rest and adjustable privacy screen are placed directly against the aisle, so you have the most privacy in the cabin.

If you go for an even-numbered seat in the front cabin or an odd-numbered seat in the second cabin, you'll still have privacy but the seat is flush against the aisle. There's a small eye-level partition. But, that's about it. Plus, the armrest itself is rather narrow, potentially leaving your elbow prone to collision with those walking down the aisle.

Unlike with some business-class cabins, such as El Al's Dreamliner, there are no seats in the Qantas cabin that are preferable for those traveling with a companion. The center two seats are always separated by a console.

That could also mean good news for solo travelers sitting in the center two seats. Because of the adjustable privacy screen between the two seats, you can make it as private as possible. On the other hand, if you're traveling with a companion you can lower it, so there is plenty of flexibility.

Keep in mind also that rows 1, 8 and 10 should be avoided, given their position next to the galleys. Additionally if you're sitting in row 10, there's a small snack bar and lavatory directly in front of you, which could get busy during the flight. Additionally, if you're sitting in the second, smaller cabin in row 12, the proximity to the premium economy cabin could be bothersome.

Behind business, you’ll come across the premium economy cabin, with 28 seats in a 2-3-2 configuration with 38 inches of pitch, 22.8 inches wide and with 9.5 inches of recline.

The cabin itself is rather cozy, with only four rows of seats. While the seats do offer preferable dimensions, it is a tight squeeze when the person in front of you is reclined. For that reason alone, the bulkhead row is the most spacious, as your legroom won't be impeded by someone else reclining. Keep in mind, however, that the first two seats on each side of the cabin (20A, 20B, 20J and 20K) could potentially be impeded by a bassinet.

If at all possible, avoid the middle seat in the center of the cabin (E). While you will still have the same width and pitch, it could get claustrophobic when the people around you are reclined.

If you're traveling with someone, it could be a good idea to take the side seats (A and B, J and K), as you'll be more comfortable sitting next to someone you know.

Additionally, row 23 is only minimally separated from the economy cabin. There are no galleys or lavatories separating the two cabins.

The economy cabin is split up into two cabins, the first of which is a bit smaller. A set of lavatories separates the two. If possible, avoid rows 43 or 44 in the front economy cabin, as the proximity to the lavatories might be bothersome.

There are two bulkhead rows in the economy cabin — 40 and 46. If you have the choice, the bulkhead seats in 40 are preferred, as there's no lavatory close by and it borders the premium economy cabin. The row 46 bulkhead is flush against the lavatories, which could be bothersome.

There's little variation throughout the cabin. The only non-3-3-3 configuration comes in the last row of economy, 59. There, you'll find seven seats in a 2-3-2 configuration. The positive with this configuration is that you have extra space in between the inside seat and the cabin wall. However, each of the seats in row 59 has limited recline. So, for a 17-hour flight, it's not ideal. That being said if you're willing to sacrifice recline for more space, the outer two seats in row 59 are great options.

Additionally, if you sit in the last row of the cabin you'll be exposed to the loud noise from the large galley just behind your seat. There are also two lavatories at the rear of the aircraft, as well as a small snack bar. Given how long the PER-LHR flight will be, chances are high that this will be a prime gathering spot for passengers to stretch their legs. So, if you're looking for a quiet economy experience, avoid the rear rows.

If you're going to be testing out the Qantas Dreamliner, make sure you know where you're sitting — especially if you're on the world's longest flight. In each of the three cabins, there are some seats that are better than others. No matter if you're traveling alone or with someone, as long as you know what to look out for, you should be set for a comfortable, quiet journey.