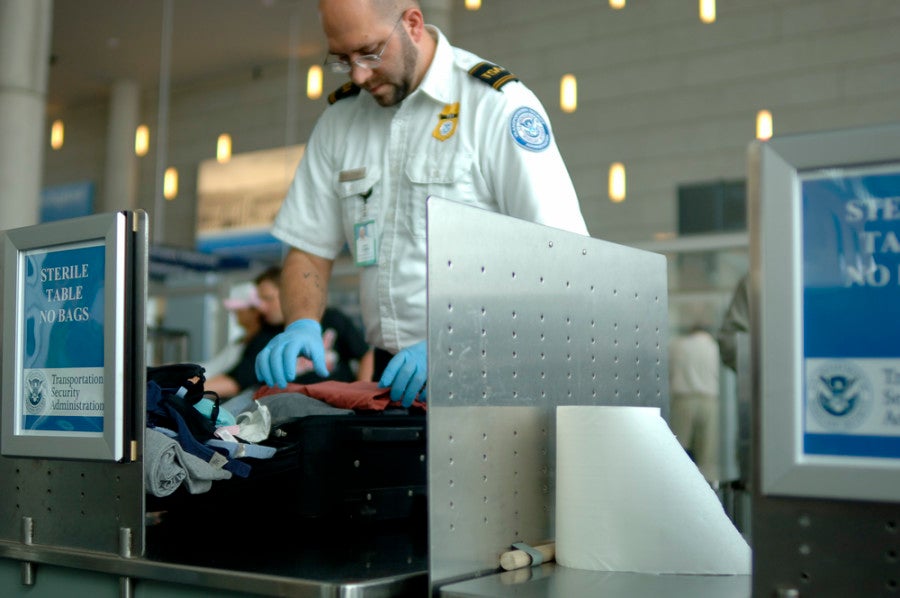 The 5 Craziest Things Passengers Tried to Sneak by the TSA in November
This post contains references to products from one or more of our advertisers. We may receive compensation when you click on links to those products. Terms apply to the offers listed on this page. For an explanation of our Advertising Policy, visit this page.
Sign up for our daily newsletter

It's always a joy to see just what the TSA confiscated every month. Will it be another weapon? A live animal? All of the above? Most likely, since passengers have no shame when trying to sneak things by security agents at airports. November was no different with TSA's Instagram filled with the hilarious — and sometimes scary — items passengers tried to bring on their flights. From delicious treats to dangerous weapons, check out the five best things found on the TSA Instagram for November.

Couldn't get enough of grandma's pie and wanted to bring some home for later? Don't fret, the pie can fly. Of course, it has to go through security screening like everything else, but if it's just a saccharine sweet filled with goodness (and no hidden secrets), it should be good to go.

Now that Thanksgiving is over and it’s time to travel home, there’s a good chance you might want to take home one of Aunt Blanche’s pies. But wait! Uncle Ernie says you can’t fly with pie. Well, tell Uncle Ernie to shut his pie hole. Traveling home with a pie is, well... Easy as pie! It has to be screened through the X-ray, but once cleared, it’s good to go. ... If you have any other questions about traveling with food, reach out to our AskTSA team on Twitter or Facebook Messenger.

When is everyone going to learn that a firearm of any type is never allowed on an aircraft in a carry-on; it's allowed only if it's securely checked and placed in the cargo of the plane where passengers can't access their luggage. As adorable and petite as this loaded gun was, it's still a no-go in carry-on baggage. Firearms discovered at security can result in fines, arrest and missed flights or any combination of the aforementioned. A word to the wise: Check your guns and you won't get featured on TSA's Instagram account.

This pint-sized revolver was discovered in a carry-on bag at the Cincinnati Northern Kentucky International Airport (CVG). … While firearms are prohibited in carry-on bags, you can pack them in your checked baggage as long as you meet the packing guidelines: bit.ly/travelingwithfirearms … As a refresher, carry-on bags go into the cabin of the plane with you. Checked bags go into the cargo hold of the plane where passengers have no access. … When firearms are discovered at the checkpoint, we contact law enforcement and they decide what happens based on background checks, interviews and local laws. … A firearm at the checkpoint could lead to fines, arrests, missed flights or all of the above. As far as what happens to confiscated firearms, that's up to each local police department.

3. Don't "Ruffle" Any Feathers with Knives

The only thing more suspicious than carrying an unapproved TSA item in your carry-on is hiding it in something like a bag of chips. This passenger who was flying out of St. Croix (STX) tried to sneak a knife past security in his carry-on ... all he had to do was throw the knife (and chips) in his checked luggage and fly away from his Virgin Island departure with no qualms.

Treats are ok, just as long as there’s no tricks in them! This St. Croix (STX) passenger brought all that and a bag of chips! We don’t mean to ruffle any feathers, but knives are not allowed in carry-on bags or on your person. Knives may be packed in checked luggage. Concealed knives such as this one can lead to fines and arrest. #HappyHalloween

In addition to staying cool, penguins Penny and Pete are the cutest passengers to go through security at San Antonio International Airport (SAT). All travelers should take a cue from this pair and play it cool as a cucumber when going through security screening. The flightless birds fully complied with TSA guidelines and emptied their pockets and took out their laptops before waddling through security. Penny and Pete, you two are our TSA saviors.

#TBT Throwback Thursday to many moons ago when Penny & Pete the penguins waddled through our checkpoint at the San Antonio International Airport (SAT). Even though all eyes were on them, they played it pretty cool. You see, traveling is pretty chill for a penguin. They don’t have pockets to remove stuff from and they don’t wear shoes. Well, Pete travels with his laptop, but Penny doesn’t know why. He always hits the wrong flippin’ keys when he types. @SeaWorldTexas

5. You "Cane" Not Bring That Through Security

This passenger at Chattanooga Airport (CHA) failed on two counts: You can't carry on replica bullets or concealed weapons like swords hidden within canes. While the fake bullet had nothing concealed in it, it's still enough to set off alarms for security when going through the X-ray. Of course, a sword hidden in a cane is a big "no-no" since it's a dangerous weapon. However, both items are allowed in checked luggage. Unfortunately, this guy found out the hard way — we're really hoping the cane wasn't doubling as an actual cane to help him walk.

#CaptionThis ... While there was nothing hidden inside the replica .50 caliber bullet, there was a sword concealed within the cane. ... Both swords and replica bullets are not allowed in carry-on bags or on your person. They may be packed in checked luggage. ... Concealed swords such as this one can lead to fines and arrest. This was discovered with a traveler’s carry-on items at Chattanooga (CHA).