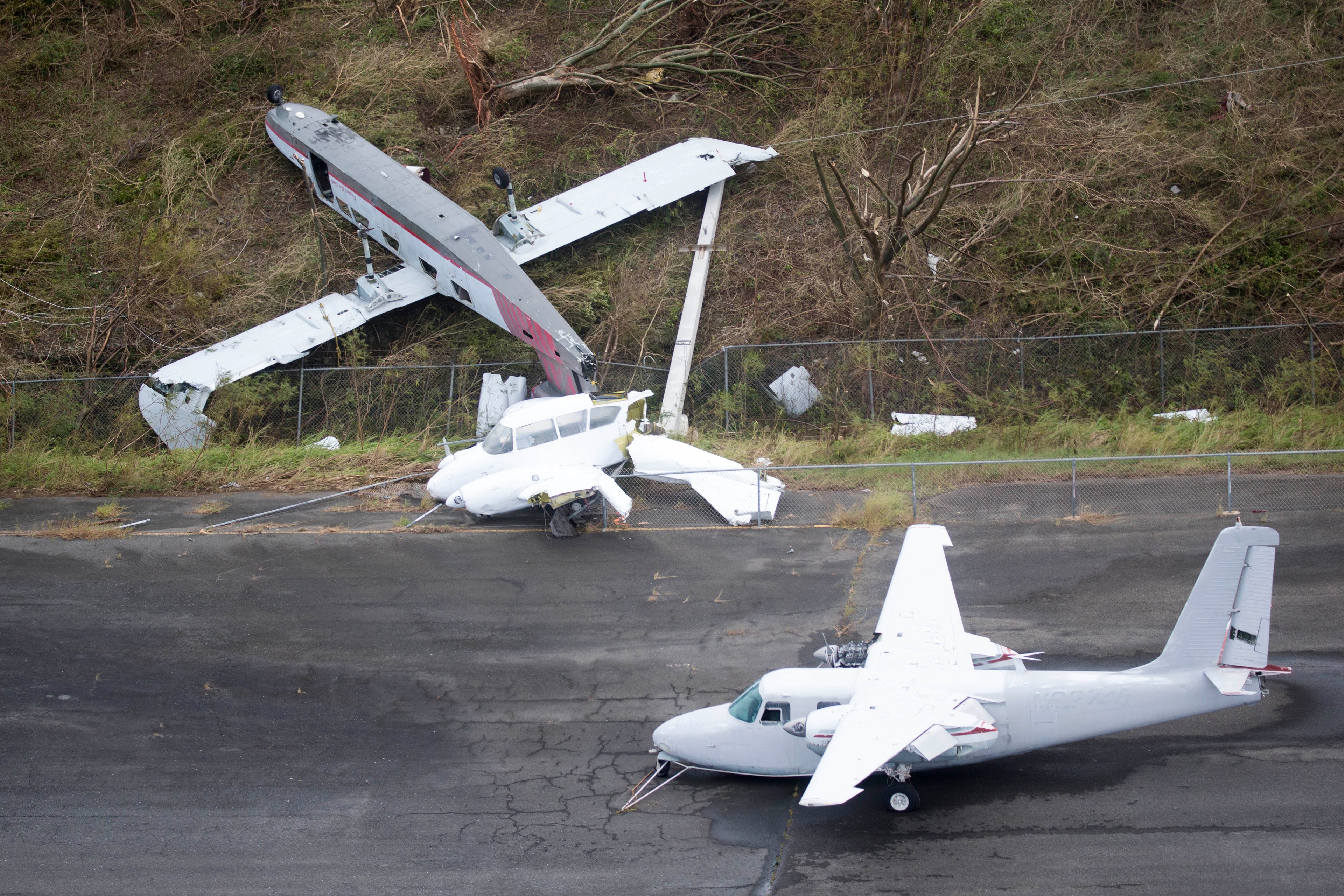 Hurricane Pilots: The Harrowing Relief Flights into Puerto Rico
This post contains references to products from one or more of our advertisers. We may receive compensation when you click on links to those products. Terms apply to the offers listed on this page. For an explanation of our Advertising Policy, visit this page.

Click here to donate to our fellow citizens in Puerto Rico who desperately need our help.

As they fly into a devastated Puerto Rico to bring the relief supplies the island so desperately needs, volunteer pilots are finding both their skills and their emotions tested.

For relief-plane pilots, the work begins well before even leaving the ground. Before a pilot flies over supplies, the agency he or she works with is supposed to be coordinating with organizations on the ground in the disaster area to ensure that someone is there to receive and distribute the goods. Far too many well-meaning people send over pallets of bottled water, clothes and canned food only for the donations to end up as heaps of waste on the side of the runway — adding to, not alleviating, a stricken area's problems.

Then there are the supplies the pilots will need themselves.

"We're telling them to make sure they bring everything they could possibly need," said Eileen Minogue, executive director of Patient Airlift Services, a Long Island-based nonprofit aviation organization that uses its network of volunteer flyers for medical and disaster evacuations and emergency-supply flights to disaster areas, including Puerto Rico. "Because when they land, there's going to be no maintenance on the ground. If they get a flat tire, they need to make sure they have a spare. If you need extra oil, you bring your extra oil. Sometimes there's no place to get fuel, and even if they do, they want cash, so you need to be prepared or be ready to stop over at another island. You can't go to the local mechanic like in Philadelphia. And if you don't have a sat phone, you may run into trouble."

Only experienced pilots need apply, she added. And good copilots are a must.

"Sometimes there's debris on the runway, or it's flooded and a 6,000-foot runway is now 2,000 feet," Minogue said. "There are so many variables that we don't want people without experience going in and creating more problems."

"At the end of the day, you can't plan for something that has that many unknowns," Zook said. He has so far flown three JetBlue relief missions, in an Airbus A320 and Airbus A321, to St. Martin, the US Virgin Islands and Puerto Rico this record-breaking hurricane season. "You don't have a good sense of what you're going to be facing down there. You just have to be able to adjust and make changes while you're down there."

Even with all the prep work taken care of, there was no guarantee for the first few days after Hurricane Maria that relief flights would even be permitted onto the island. It's standard for the US military to take control of airports immediately after a disaster of the magnitude of the hurricane, with the priorities being evacuating people who need to get off the island, ferrying in emergency personnel and search-and-rescue teams and, if need be, getting troops on the ground to maintain order. Even now, SJU is buzzing mostly with military aircraft like helicopters, Ospreys and Beechcraft C-12 Hurons, Zook said.

At this point, though, the FAA has basically been greenlighting any legitimate relief organizations arranging flights to San Juan, Minogue said, as the gravity of the crisis has become rapidly more evident.

The first issue pilots face going to Puerto Rico is the lack of communications with the island, which forces them to eyeball the skies constantly for potential collisions.

"Normally when you fly to San Juan, you're handed off to San Juan as soon as you leave Miami's airspace, and you're under radar control the entire time," Zook said. "But now San Juan Center is inoperative, so probably the last 80 to 100 miles, you're under visual flight rules — looking out the window, turning on the traffic-avoidance systems. I wouldn't say it makes us nervous — we're paid not to be — but it does raise an extra level of caution."

The need to be alert doesn't end once the wheels are on the tarmac in San Juan. Though the runway made it through the storm in relatively good shape, much of other infrastructure was wrecked, including the power.

"Our first flight down, we had to fly radios and communications down to them," Minogue said. "Air traffic control called us to say their generator blew up and they had no food, so we flew in and gave them support."

"The infrastructure is just not there," Zook said. " No runway lighting, no radar, no power controllers, no ground-based instruments, the approach facilities aren't up and running. Night landings and takeoffs are out of the question."

Taxiing has become something pilots largely do at their own discretion, Minogue and Zook both said, which is another reason pilots need to be experienced and ready to improvise.

"You're kind of on your own figuring out where you need to lead the airplane, but the people operating in and out of there are all highly skilled professionals who understand the system," Zook said.

And San Juan's relatively lucky. Other airports in Puerto Rico and other parts of the Caribbean are still unusable, hampering efforts to get more far-flung regions much-needed food, water, medicine and power.

"Into St. Thomas, my pilots told me there were more planes upside down than right side up," Minogue said.

All that makes the relief missions difficult enough, but the hardest part for the pilots may be flying back home and knowing they're leaving suffering people behind.

"It's heartbreaking to decide who can and can't come aboard your plane," Minogue said. "These pilots are doing whatever they can do to get these people in desperate need out, but where are we taking them? Who are we taking them to? Do they have someone who will take care of them once they land in the States?"

"You see the pictures on TV and the internet, but when you're there yourself, to see someone you know who works at the airport whose house is flooded with water..." Zook said. "You distance yourself and you have a job to do while you're down there, but I'd be lying if I said I wasn't fighting back tears when I first saw it. But there are only so many seats on the plane, there's just so many flights you can do in a day. And as much as we're doing and as much as we're beefing up to do more, it really seems like you can't do enough."