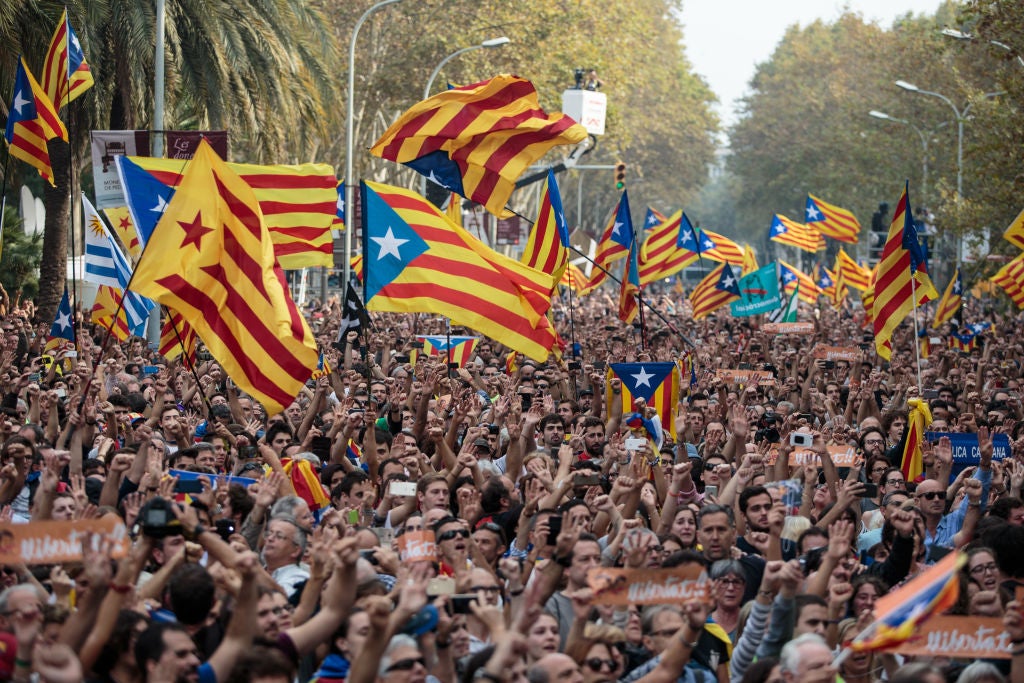 Catalonia Declares Independence as Spanish Senate Votes to Retake Control
This post contains references to products from one or more of our advertisers. We may receive compensation when you click on links to those products. Terms apply to the offers listed on this page. For an explanation of our Advertising Policy, visit this page.

In a series of escalations Friday, the parliament of Catalonia declared independence from Spain, followed shortly by a vote in the Spanish senate to grant the government in Madrid unprecedented powers to rein in the breakaway region.

“We constitute the Catalan Republic, as an independent and sovereign country, under the rule of law,” the resolution to secede read.

Catalan legislators took the vote in secret so that no individuals could be singled out for punishment by the central government. Of the 135-member body, 70 voted for secession, 10 voted against, two abstained, and the rest chose not to cast a ballot or did not show up for the session, highlighting how controversial breaking away from the rest of Spain is among Catalans. The vote to secede forced the hand of the region's president, Carles Puigdemont, who had been seeking a compromise that would have won Catalonia concessions from Madrid while avoiding the outright creation of a separate nation.

In Barcelona, supporters of secession began making plans to form human shields around key government buildings to prevent troops from the central government from seizing back control of the region. According to the New York Times, large crowds gathered outside the regional parliament building as the resolution was debated, chanting "Spanish occupiers!" and "Leave Catalonia!"

Shortly after the Catalan declaration, senators in Madrid voted to invoke Article 155, a clause in the Spanish constitution that grants the central government emergency powers to suspend Catalonia's autonomy and take over control of essential parts of the administration. Madrid can now remove Puigdemont and his ministers and assume direct authority over regional police, finances and public media. The senate vote came to 214 in favor of activating Article 155 and 47 against, with one member abstaining.

“Article 155 is not against Catalonia but to avoid the abuse of Catalonia,” Spanish prime minister Manuel Rajoy said in a speech demanding the extra government powers.

Catalan officials could now face charges of sedition or rebellion, and Catalan police officers who refuse to follow orders from Madrid could forgo their pay, be fired or even face potential prison time themselves.

The US State Department issued a statement Friday supporting the Spanish central government's efforts to keep Catalonia from seceding.

As of Friday morning, the State Department hadn't issued a new travel advisory since its October 3 warning about possible transportation disruptions because of a general strike planned after an October 1 referendum that paved the way to parliamentary resolution. The British Foreign Office, however, told Britons traveling to Catalonia to "exercise caution" as demonstrations "may occur with little or no warning and even demonstrations intended to be peaceful can escalate and turn confrontational."

The Spanish government added extra security to airports and train stations in Catalonia in early October, but there were no immediate reports of issues at Barcelona-El Prat Airport (BCN) or other international transportation hubs.