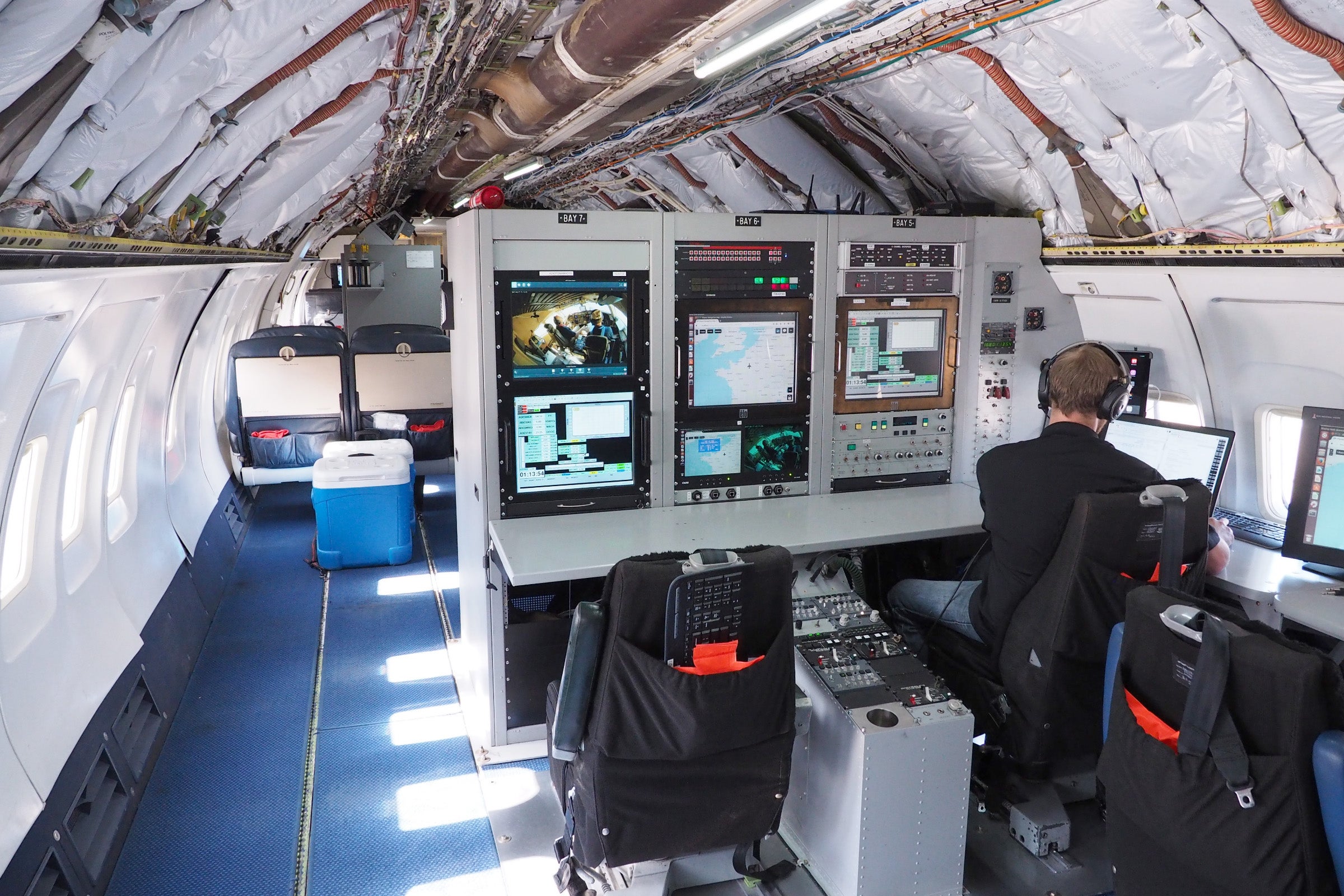 And I got to fly it at the Paris Air Show today.

What is Honeywell, you ask? Well it isn't an airline — you may recognize the name from the branding you've seen on thermostats, of all things, but Honeywell's also in the aviation business, through its Phoenix-based aerospace division. That group is tasked with building everything from cockpit displays to jet engines — or, in the case of today's exercise, the infrastructure needed to power Inmarsat's new Ka-band in-flight Wi-Fi, called Global Express (GX).

If you've flown Lufthansa or Austrian within Europe recently, you may have had a chance to experience this speedy new Wi-Fi option — if not, you should be able to give it a shot on Air New Zealand, Qatar Airways, Singapore Airlines and a handful of other carriers soon.

I'll get to the details of today's flight shortly, but first, a bit on Global Express. Inmarsat's GX network consists of four satellites, the first of which launched in 2013. Through these satellites, the company can provide high-bandwidth Ka-band connectivity to most of the world. There are three in operation today:

A fourth satellite launched just last month, and will begin beaming bits and bytes to Earth sometime later this year. This network will compete with ViaSat 3's global coverage once that goes live in the next decade.

Inmarsat and Honeywell support gate-to-gate connectivity, but today we were only able to connect after takeoff and prior to our final descent. Still, the satellite connected quickly and provided fantastic download speeds via my iPhone:

A technician was able to pull in even more bandwidth via his laptop.

I kept hearing great things about FaceTime performance, but it was too early in the morning (Eastern Time) to give that a try. Fortunately, Paul Thompson had put the system through its paces on a Lufthansa A321 flight in April — this time, I was focused on the plane.

Onboard the Connected Aircraft

As I mentioned, Honeywell's 757 has been around the block a few times. The company also operates several other test aircraft, including an Embraer E-170 (N170EH).

Up front, it's not a whole lot different than other dated 757s — there's of course a standard 757 cockpit, a lavatory and a small galley.

Behind that is a small "first class" cabin, with 10 comfy leather recliners.

There are four more seats behind the center exit door, two of which offer more legroom than I've ever seen before.

Then there are another four leather recliners toward the rear of the plane — again, with loads of room to stretch out. And that space does come in handy — this plane is in the middle of its second round-the-world tour, which began in the US, followed by London, now Paris, then Copenhagen, Dubai, Moscow, Singapore, the South Pacific and Hawaii before returning home to Phoenix. So these recliners (and their legroom) do get put to good use by the technicians and other staff on board each flight.

Speaking of technicians, there are several workstations throughout the aircraft, including this bay used to test various equipment, up to and including a (temporary) third engine undergoing testing or certification during a flight.

Since today was all about Wi-Fi, we had a chance to check out Honeywell's router, which offers two receivers, enabling seamless switching from one coverage area to the next. Switchovers to a new satellite take a bit longer, but still only 45 seconds or so — compared to 2-3 minutes with some competitor solutions.

Wi-Fi connectivity is provided through a series of access points much like the one below, typically mounted just above the ceiling panels throughout each cabin.

But enough about the Wi-Fi — this was also a fully functioning 757; just without the pesky FAA requirements to keep passengers out of the cockpit.

I'll never forget my Gogo 737 landing at AUS, so I was eager to have another go at sitting up front.

Fortunately, the jump seat hadn't been claimed for takeoff, so I got to ride behind the pilots for the first 20 minutes of the trip. Given that the Paris Air Show kicks off in just two days, there was plenty of plane spotting to be done, including an Airbus A380 with winglets, designed to improve fuel efficiency.

With an uncharacteristically light load, our 757 rocketed from the runway after a mere 20-second takeoff roll:

... then over the French countryside.

In total, the flight lasted 90 minutes, and brought us near the Swiss border, before we made our way back to Le Bourget.

Finally, we made a series of right turns around Paris, giving the group an amazing view of numerous landmarks, including the Eiffel Tower.

Before you ask, no, it isn't typically possible to experience a flight like this unless you're an employee of Honeywell or its contractors, however the company does open flights up to the press from time to time. The plane's speedy Wi-Fi tech will soon be available on many commercial flights, though, including those operated by Air New Zealand, Austrian, Lufthansa, Qatar, Singapore and others. Global Express (GX) appears to be very well received; there's no question that it's a huge step up from the often exceptionally poor Wi-Fi we've come to expect from some of the carriers mentioned above.

I can't imagine a better way to kick off the 2017 Paris Air Show. I'll be reporting from the industry's biggest event throughout the next few days, so stay tuned to this page and my Twitter and Instagram accounts for much more from Le Bourget.