A Look Inside Asiana Airlines' First Airbus A350 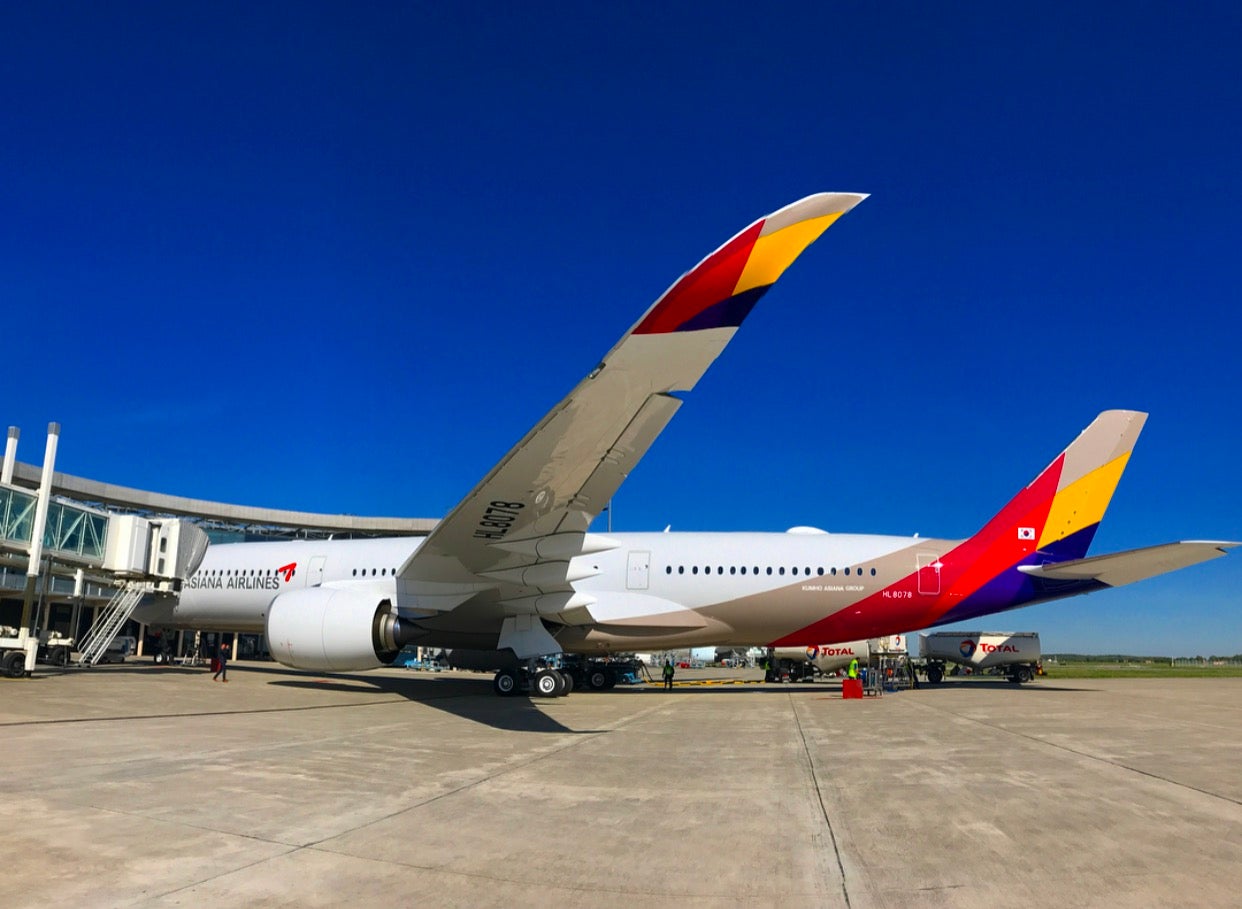 Asiana Airlines has become the 12th carrier to take delivery of the Airbus A350-900 XWB, ordering 30 that'll start operating within Asia, including routes from Seoul (ICN) to Hong Kong (HKG) and Hanoi (HAN). In mid-August, the new aircraft will begin long-haul flights to San Fransisco (SFO), with European destinations like London (LHR) expected to follow soon after. I attended the delivery, where the airline formally accepted its first type of A350 XWB, the A350-900.

The tail design is representative of the petals of a flower.

The first A350 provides another great aircraft option for passengers, as Asiana already operates the Airbus flagship, the A380 (see our review of first class on this aircraft here).

First, let's take a look at the state-of-the-art A350 cockpit.

A350 flight decks are very spacious and can seat up to four flight crew.

Center seats alternate per row between aisle seats — or 'honeymoon seats' — which are perfect for couples traveling together, but possibly not somewhere you'd want to end up if you were traveling alone.

Each seat has a pitch of 77 inches when in the fully lie-flat position, just like the Stelia Aerospace seat you'd see in Thai Airways' A350 business class.

The seats are upholstered in the same pattern and material as Asiana's A380s, which head up its long-haul network.

Each seat comes with a lamp, seat control panel and both USB and international power sockets.

Views from the window seat are better on the A350 thanks to the aircraft's larger windows.

On the A350, Asiana features a new premium-economy product it's calling 'Economy Smartium,' which is exactly the same seat and service as you would expect to see in regular economy, only these seats have more legroom — also included in a ticket for this section are priority boarding and lounge access at Seoul Incheon Airport (ICN).

There are four rows of 36 premium-economy seats, arranged in the normal A350 economy 3-3-3 configuration.

While the seat width remains the same throughout both classes, at 18 inches, the amount of pitch in premium economy is 36 inches, compared to 32 inches in coach.

Headrests can be moved and molded for extra comfort, which is a nice touch.

In the economy cabin — behind the four rows of premium economy — seats have a pitch of 32 inches, and are 18 inches wide.

Each seat comes with both USB and international power sockets.

Despite it being a brand new aircraft, Asiana's not taking any risks in terms of the interior's design, and has maintained a very plain and neutral color scheme throughout the entire aircraft.

Each economy seat has an IFE screen that measures 11.1 inches.

The aircraft is equipped with in-flight WiFi and roaming service, enabling passengers to use the internet and make calls during the flight.

It's great to have a brand-new Airbus aircraft join the Asiana fleet so passengers can enjoy both the A380 and the newer A350. While the physical seat remains the same in both premium economy and economy, I think Asiana's premium-economy class will be a success, as the legroom is quite generous and passengers can relax or get some work done in the lounge at Seoul Incheon (ICN) as part of the ticket price. The aircraft is installed with full LED mood lighting, which helps improve the in-flight experience, and the introduction of fresh air into the cabin every 2-3 mins (as is the standard on the A350) will continue to ensure passengers feel fresh and comfortable upon arrival.