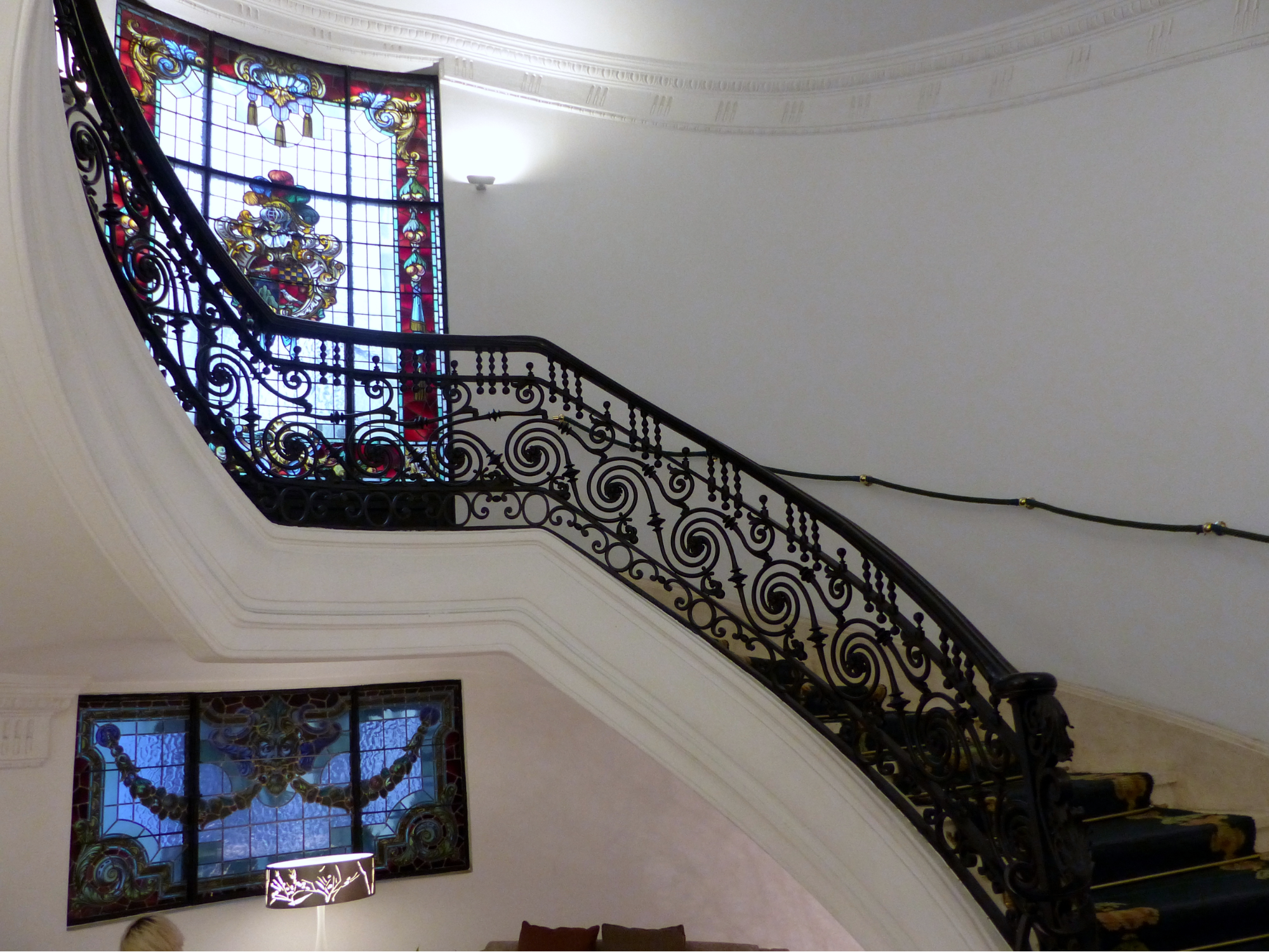 Berlin — during those trips, I also wandered off to smaller European stops like Prague, and Krakow. Somehow I’d stayed (and eaten well) in Barcelona, too, but never set foot in Madrid — the capital of Spain, third largest city in the EU with 3.2 million people and the host of some of the world’s best museums and restaurants. So my wife and I agreed: Madrid would be next.

The main criteria for us was simple: Find a points-hotel that’s within walking distance of the "Art Triangle" of museums: The Prado (known for works by Velázquez and Goya), the Thyssen-Bornemisza Museum (featuring Renaissance and Modernism art with plenty of Impressionists and Expressionists in the mix) and The Museo Nacional Centro de Arte Reina Sofía (where Pablo Picasso's Guernica draws thousands).

The AC Palacio Del Retiro, Autograph Collection, caught our eye because it’s not only near these works of art but also right along Buen Retiro Park — it's kind of like staying in a hotel on Fifth Avenue or Central Park West in New York City — and a great base for morning runs or shutterbugs eager to capture the local flora. The building itself, constructed in 1908, was originally a private mansion for the Oriol family. Today, it’s a luxury hotel protected by National Heritage status, offering 50 rooms and dazzling interior design details — gorgeous columns and ironwork, a sumptuous spiral staircase and multiple stained-glass windows — very one-of-a-kind, which is what an Autograph Collection hotel is supposed to be.

The Palacio is a Category 8 property requiring 40,000 Marriott Rewards points (or $145 + 24,500 points per night) for a standard room. I chose to book with my Citi Prestige Card and take advantage of its fantastic fourth night free benefit (note that reservations made with the Citi Prestige on or after July 23, 2017, will be calculated as the average nightly rate of your total stay, not including taxes, instead of whatever the fourth night cost alone is).

The total cost for all four nights of my stay (including taxes) would have been $1,767.18 (a nightly rate of $441.79), but thanks to the fourth night rate credit of $444.87, my total came to just $1,322.31, which, at $330.50 per night was a bit more manageable. I ended up earning 5,525 Citi ThankYou Points since the card gave me 3x points on all my hotel and dining transactions. Alternatively, I could have opted to pay with my Chase Sapphire Reserve, which also offers 3x on travel purchases, or my Chase Sapphire Preferred, which would have given me 2x points on travel.

As a Marriott Gold Elite member, I received a few extra complimentary benefits, like daily continental breakfast, Wi-Fi and a room upgrade (based on availability, at time of check-in). I also earned a total of 20,921 Marriott Rewards points for the four-night stay.

The building is impressive but small; it’s only six stories high and occupies a corner. Like many old buildings in Madrid, it looks spectacular at night when the lights show off the ornate façade.

For better or worse, there are no doormen or valets hanging around outside rushing to open your door or grab your bags.

But once inside the lobby, you get a first glimpse of the opulence: stained glass windows, oak and tiled flooring, marble columns, gorgeous moldings along the walls and lots of beautiful wrought-iron.

At any given time, there were two front desk agents helping guests. They tended to be young — in their 20s or 30s — and very eager to help. Their English was flawless — my Spanish didn’t last past "Hola!" — and they seemed genuinely eager to please.

My wife and I were taken on a tour of the ground floor so we could see the awesome spiral staircase, the understated business area and the onsite restaurant that serves breakfast, lunch and dinner.

This was a hotel I wanted to explore the old-fashioned way, by walking around. The spiral staircase was clearly the centerpiece, but there are other treasures to behold, including an ancient elevator made with wood and wrought-iron.

We were happy to have been upgraded to a Superior Room and were delighted with the extra-tall ceiling accented with columns, which felt like a loft space. The king-size bed along one wall sat opposite the living room space with a sofa, two chairs, a coffee table, a TV and a bench. Tons of natural light streamed in through the windows overlooking the park. It was quiet and peaceful.

The details impressed: It looked like these were original hardwood floors and wall moldings. And there were all of the comforts one takes for granted until they are gone: enough wall outlets to charge multiple phones and laptops, easy-to-access night lights, fully functioning curtains, a mini bar, bluetooth speaker, a full-length mirror, orchids in a modern vase and — hallelujah — an espresso machine.

The only thing that struck me as odd was the kitsch frog sitting on a ledge near the TV, like a prop that had been left behind from some other cheesier hotel.

Dark tile is risky in bathrooms; the space can seem smaller than it really is. But here, the stark contrasts of the black with the white dual sinks, towels and bath tub (as well as the vertical and horizontal lines of the room) created a pleasing and symmetrical elegance.

There was nothing earth-shattering about the tub, shower or toilet, but they were all immaculate.

And I appreciate when the toilet is behind a closed door, though I am yet to ever use the inevitable phone that’s in the room with it.

The toiletries, including the usual soaps and shampoos, are made by Ortigia, a Sicilian company founded in 2006.

I can’t help but feel like a kid in a candy store when the bathroom also supplies dedicated toiletry kits. In this case there were two dental kits, one shaving kit, one comb and a shower cap.

Even though we were in Spain, the center of culinary wonderfulness, we occasionally feasted on whatever was in the mini-bar. I refrained from the potato chips (Pringles and Jose Andres’s San Nicadio brands) and did not dip into the nuts or candy, but I did break down and have a bottle of Coke. And I grabbed the tin of Smints, packaged in a hard metallic shell.

The on-premises restaurant known as The Suite Bar looks and feels like a casual, clubby eatery — it does not pretend to be fancy or fine. The continental breakfast included with my Citi Prestige reservation came with fresh fruit, cereal, toast, orange juice, coffee and a few pastries.

The full breakfast buffet, which runs 31 euros (~$33) per person would have allowed me to feast on any of the magnificent pastries and parfaits showcased — and lit from behind like a bar — at the end of the dining room.

Room service was nothing special; we ordered the meatballs and a seafood pasta, but the food came soon enough on an elegant tray, arrived perfectly hot and the bread was fresh. This meal won’t earn any Michelin Stars, but it hit all the high notes.

To get to the spa and fitness center, all you have to do is press the button for -1, the basement. There’s not a ton of space to explore, but both rooms were empty when I visited. The gym is small and has limited equipment, including free weights, a treadmill, an exercise bike, a lat pulldown machine and a bunch of rolled-up white towels.

In the spa area, brown and tan tiles line the walls; candles surround the jacuzzi.

There are more famous spots in Madrid, like the Hotel Ritz (built in 1910) and the Westin Palace, which was the largest hotel in all of Europe when it first opened its doors in 1912, but the AC Palacio Del Retiro, Autograph Collection is the perfect personification of a boutique hotel: small, stylish, centrally located and filled with rich history. For Marriott-Starwood loyalists seeking upscale accommodations near the museums and Buen Retiro Park, you can’t do better than this.

Have you ever stayed at the AC Palacio Del Retiro in Madrid? Tell us about your experience, below.