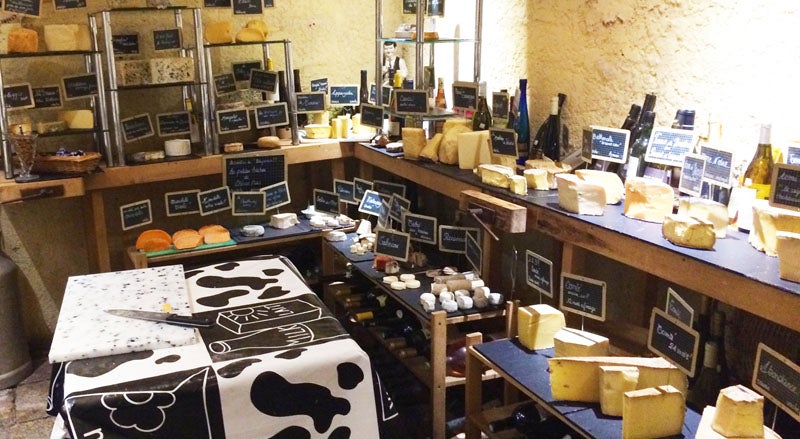 Favorite Places: An All-You-Can-Eat Cheese Cave in France
This post contains references to products from one or more of our advertisers. We may receive compensation when you click on links to those products. Terms apply to the offers listed on this page. For an explanation of our Advertising Policy, visit this page.

Time for another installment of our weekend series ”Favorite Places,” featuring beloved travel destinations, attractions, restaurants, hotels and more from different members of the TPG team. Earlier this year, TPG Travel Editor Melanie Wynne took a whirlwind trip through Europe, with a stop in Bordeaux, France for a delightful meal at a cheese-lovers' paradise called Baud et Millet. (All photos by the writer, unless otherwise specified.)

Though it's best known as a wine region, Bordeaux is also a city in southwestern France, and with its Gothic cathedral, wide pedestrian avenues and ornate 18th- and 19th-century architecture, it feels like a smaller, more intimate version of Paris. I traveled from Madrid to Bordeaux to meet up with TPG Contributor Christine Cantera and kick off a jaunt to the nearby Atlantic coast, but to our surprise, we first ended up having one of the great meals of our collective lifetime.

Weeks before our trip, Christine sent me a list of six options for our one Friday-night dinner in Bordeaux (she's very serious about food), and my eye was immediately drawn to one that said: ALL-YOU-CAN-EAT CHEESE CAVE. After we virtually high-fived over this choice, Christine — who lives in France and speaks fluent French — promptly became extremely busy and forgot to make a reservation.

Fortunately, however, when I arrived that Friday evening at our Airbnb flat across from the Musée d'Aquitaine— just shy of hungry and asking about the cave — Christine quickly called the restaurant and was assured that there'd be a table waiting for us within 45 minutes. Again, we high-fived — but this time, happily in person. (I live in Los Angeles, and moments like this are why I love to travel.)

Following a short ride on the city's splendid public tram and a five-minute walk through Bordeaux's lovely historic center, we arrived at Baud et Millet at 8:30pm, and were greeted at the door by a small, twinkly-eyed waiter with graying curly hair, pink cheeks and wire-rim-spectacles who spoke to us in English, his accent a mix of British and French. At first, he frowned, made a tsk sound and said we'd arrived too late to dine, but when he saw our crestfallen faces, he broke into a huge grin, said he was only teasing and led us to a lovely table. Quite the prankster, that one.

After taking a cursory look at the fromage-focused menu of burgers, chops, fondues and more, we both ordered the all-you-can-eat cheese experience for €32 ($35) apiece — and our waiter nodded approvingly. We hadn't failed to notice that the wall opposite our table was entirely lined with bottles of wine, all stacked on shelves, in bins and arranged on tables, and were pleased when our waiter urged us to peruse the offerings — all from Bordeaux sub-regions like Pomerol, Medoc and Saint-Émilion — and choose the bottle our hearts desired. Christine zeroed in on a classic, €30 ($33) Merlot from Saint-Émilion, which proved to be delicious.

Our waiter then invited us to join him down the darkened stairs. This normally wouldn't be our idea of a good time with a stranger, but how else would we get to the cheese? We took a deep breath and followed him.

And what a good decision that was. Because, dear TPG readers, this cheese cave was like a dream I once had.

In a roughly 250-square-foot room that was stone-lined, temperature-controlled and encased in one whole wall of glass, we were guided through 128 different kinds of cheese. We're talking Roquefort, Beaufort, Munster, Comté, Brie de Meaux, Gruyere, grassy Tomme and pungent Époisses. There were eleven kinds of herbed or spiced goat cheese, nine types of Parmesan, five types of aged Gouda and six kinds of cheddar.

We were left alone with plates, knives, nuts and dried cranberries, and told we could have as much as we liked. Amazed, we stood still for a moment, unsure whether to laugh or weep — but either way, our joy was pure.

Alighting from the basement with our first haul, we were happily surprised to see our table laid with two huge bowls of green salad, a basket of crusty bread, two huge pats of French creamery butter and our wine, waiting for our approval. Once the vin was poured, we toasted our brilliant choice for dinner and tucked into a dairy-rich feast for the ages.

The tourist couple seated beside us chuckled in solidarity at our blissful expressions, and we all laughed. By that time, they'd already been there for a few hours, with no sign of leaving, and we'd soon learn that it was their second night's visit ... in a row.

When we finally made it to the end of our second plates of cheese, we worried that we might never move again; when the waiter asked us if we'd like dessert, we stared at him as though he might be insane. But then Christine's face lit up like a candle, she whispered something in French in the waiter's ear, and a moment later, he swept back over to us with two perfect bowls of lemon-basil sorbet — which proved the perfect remedy to our lactose-laden excess.

The icing on the cake/butter on the bread? We'd arrived on the first Friday of the month, so I earned 3 points per dollar with my Chase Sapphire Preferred. To make things even better, the next day we awoke feeling like a million bucks, as though we hadn't consumed a million calories. Ah, France.

Note: Bordeaux-Mérignac Airport (BOD) is served by foreign carriers within all three major alliances, including Iberia, on which I flew from Madrid (MAD) for a a 90-minute journey that cost me a few dollars after a redemption of 6,500 Avios, scored by transferring an equal number of Ultimate Rewards.

If you've never been to Bordeaux, I highly recommend a visit — as well as lunch or dinner at Baud et Millet!