On our spring break trip to Spain we had three generations of travelers together with my mom, my daughter, and myself all making the journey.  This meant we not only required the space for the three generations, but we had to also tailor our activities to keep everyone’s interest.  I am personally a big fan of multi-generational travel, but when you are talking about hotel rooms in Europe, it can be tricky to make it work so everyone can stay in one room rather than have the added expense of multiple rooms unless absolutely necessary.

While in Madrid we were able to make it work with just one hotel room not only at the Radisson Blu Madrid Prado which I reviewed here, but also at the Westin Palace Hotel Madrid that I will discuss in this post.

History of the Westin Palace Madrid:

This hotel stands out in Madrid both because of the location and the big light up “Palace Madrid” sign on the exterior; also because it has some history and prestige that is notable and not available at every hotel.  Obviously you don’t have to have prestige and history everywhere you lay your head at night, but it is fun to sometimes select a hotel that makes you feel like you are a part of the history in the city you are visiting.

According to their website, The Westin Palace Madrid is Located in the central ‘Letras District’, opposite the Spanish Parliament, and was built at the initiative of King Alfonso XIII to accommodate travelers at the turn of the century. It reportedly became the most modern hotel in Europe at that time.  In the 100+ years since opening its doors they say it has played host to Picasso, Dali, Albert Einstein and Madame Curie, among many others.

Of course the hotel has been refurbished in the 103 years since opening, but it still retains much of its original charm and culture.  Even when traveling with a 5 year old, this was something that appealed to us and made our last night in Madrid extra special.  This is the kind of place where people were walking around taking pictures of the hotel just as if it were a tourist attraction all by itself…because it kind of is.

Check-In at the Westin Palace Madrid:

The latest check-out we could get from the Radisson Blu was about 1PM, so we arrived to the Westin (very short walk between the two hotels) and were ready for check-in there by 1:30PM.  It was not too surprising when we were told that our room was not yet ready, and we were told to come back at 3PM.

We left our bags and went out into the city until 4PM when we returned expecting to check into our room as it was now both past the time of official check-in and when we were told our specific room would be ready.  However, the room was not yet ready, and our 5 year old was pretty darn tired.  I probably had a not-too-happy look on my face when the check-in agent delivered this news, so we were offered some drinks in the elegant 1912 Museo Bar while the room was finished.

I was pregnant and my mom wasn’t in the mood for a “real” drink, but we quickly found that the bar actually had some fantastic non-alcoholic drinks on their menu that we all enjoyed.  We sat in the bar for a half hour or so while the room was finished, and enjoyed our complimentary fancy non-alcoholic drinks that were normally priced at around 17 euros each!  Holy moley!

There are 467 rooms and suites at this hotel, making it pretty large for Madrid.  We didn’t actually book the hotel until we were in Madrid, and there was no standard award availability at that point.  However, there was a premium room for 14,500 SPG points, which is a 2,500 up-charge over what the standard room would have been.  These sort of premium rooms and suites are not available for booking with points on the SPG website, but instead you have to book them over the phone or via online chat with SPG.

I booked the room over the phone with SPG and was told that the room had two single beds, which I sort of found strange for Madrid, but sounded good for our needs.  In the end the room did not have two beds, and that room type did not exist at this hotel.  However, I was able to get a rollaway which normally costs 50 euros per night, though we were not actually charged for it.  I’m not sure we weren’t charged due to the room type confusion or just an oversight, but it was a welcome break from paying for rollaway beds either way.

The room itself was a pretty good size for Europe and easily accommodated the three of us for the night with the rollaway bed.  The bed at this hotel was much softer and more comfortable for our Americanized tastes than most in Europe.

The room was probably not the most modern or up-to-date in terms of decor or furnishings, and there were some stains on the carpet, but the window perch with the view of Madrid made up for any slight imperfections with the room.

The bathroom had a tub/shower combo which was very nice for being able to give my daughter an actual bath rather than the shower she was getting at the Radisson Blu the couple of nights prior.  The bathroom also had a double sink and a separate room for the toilet, which of course makes getting ready and sharing space with a family easier. 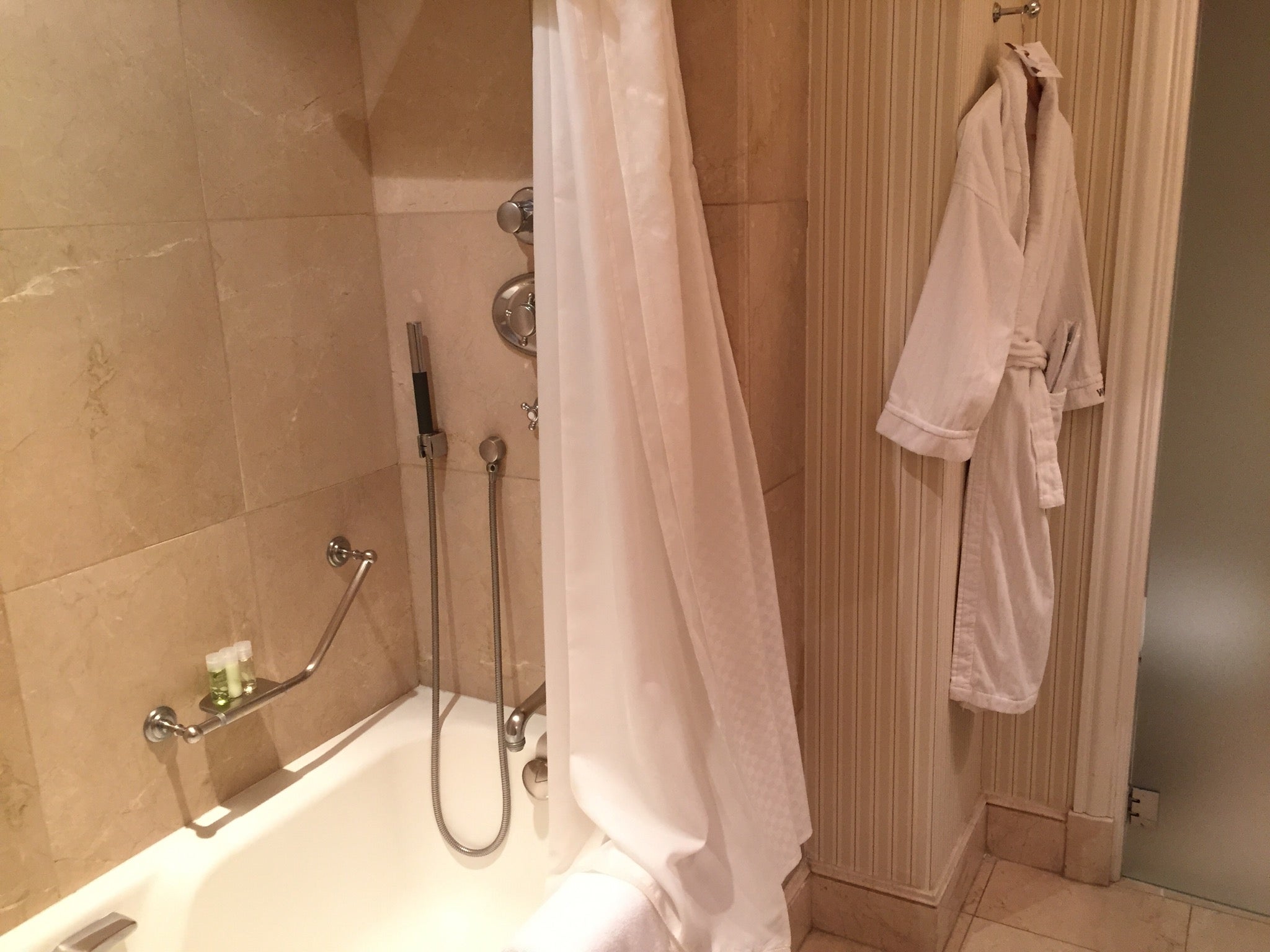 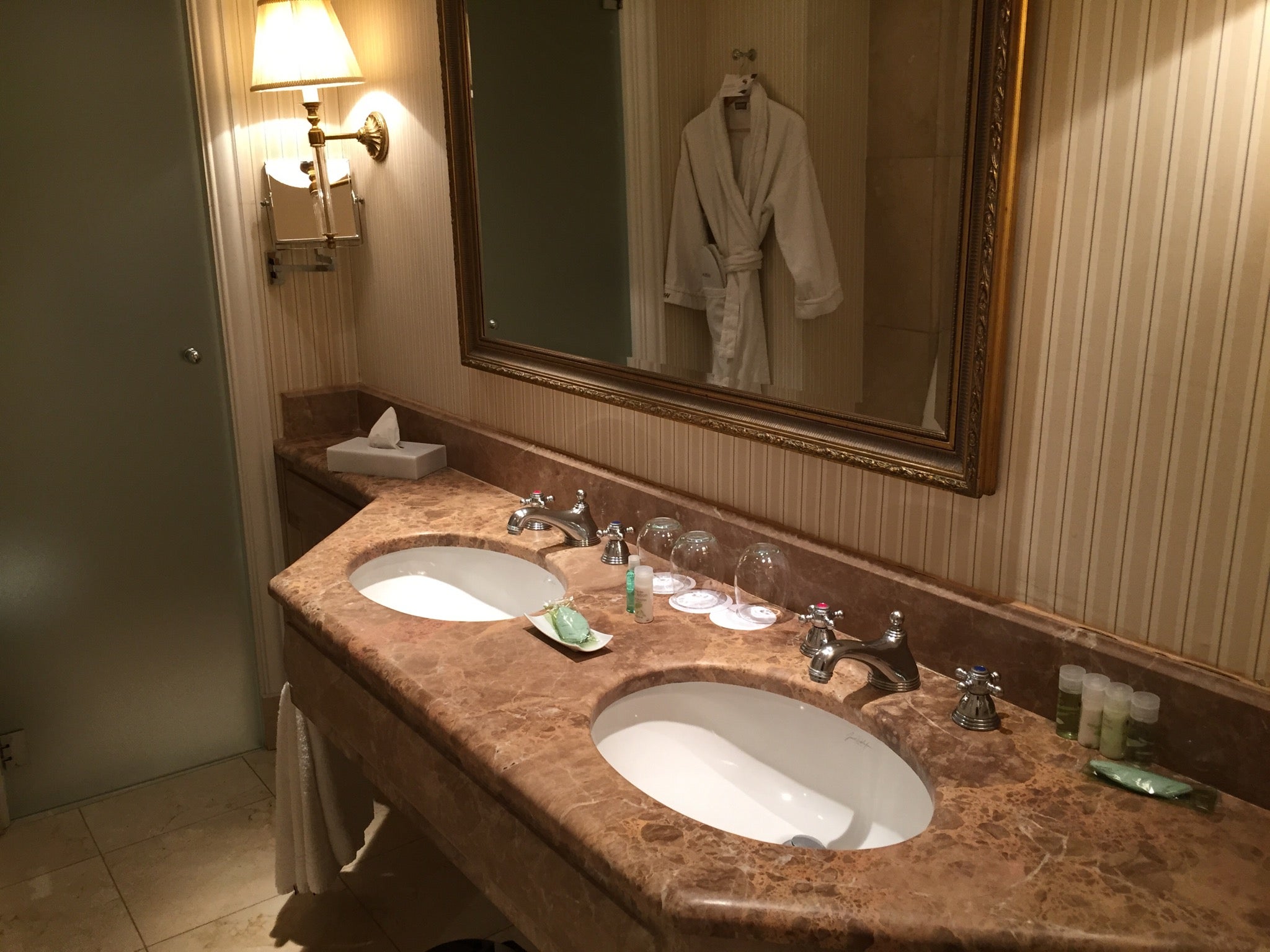 We splurged on room service breakfast at the Westin as we had an early train to catch to head to Barcelona and we wanted something fun to look forward to along with our early wake-up call.  You can blame Hyatt Diamond status for my daughter developing a love for pancakes served in the room… 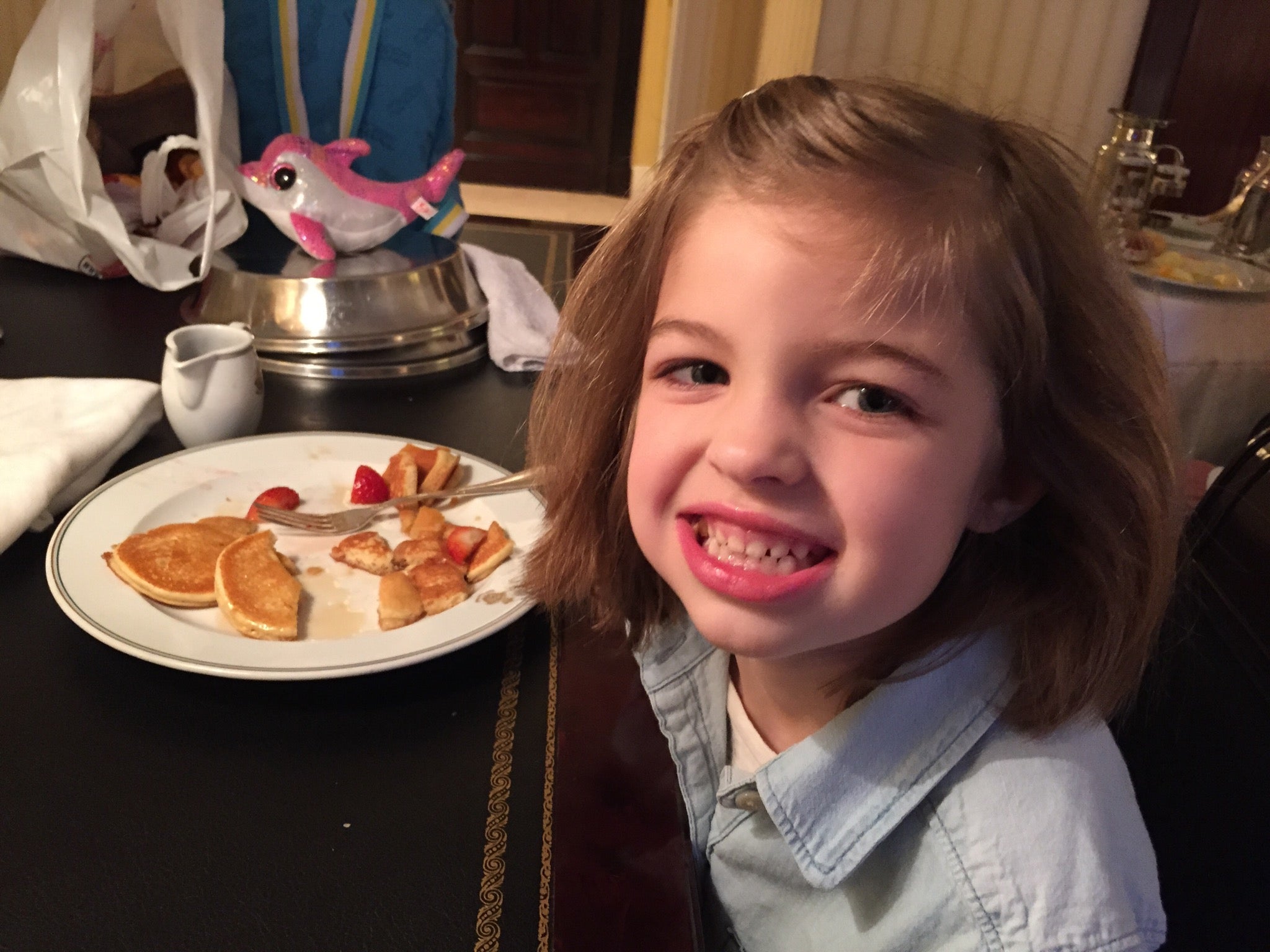 The breakfast all-in came to about 60 euros for the three of us, but it was delicious, served on time, and exactly what we needed to get rolling early that morning. 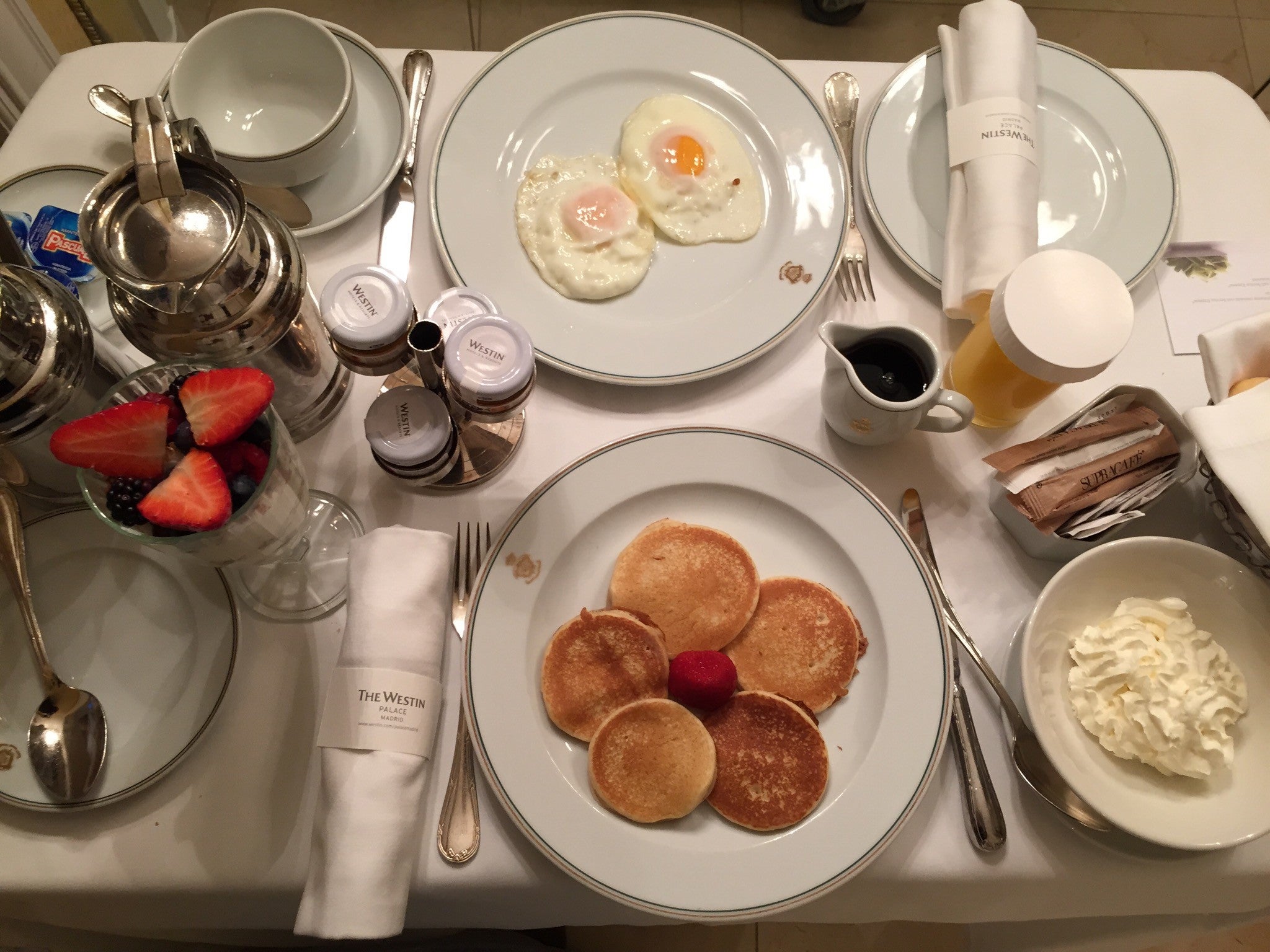 One of the things I love about miles and points is that they allow you to save in some areas of your vacation so that you have the freedom to splurge in other areas from time to time! 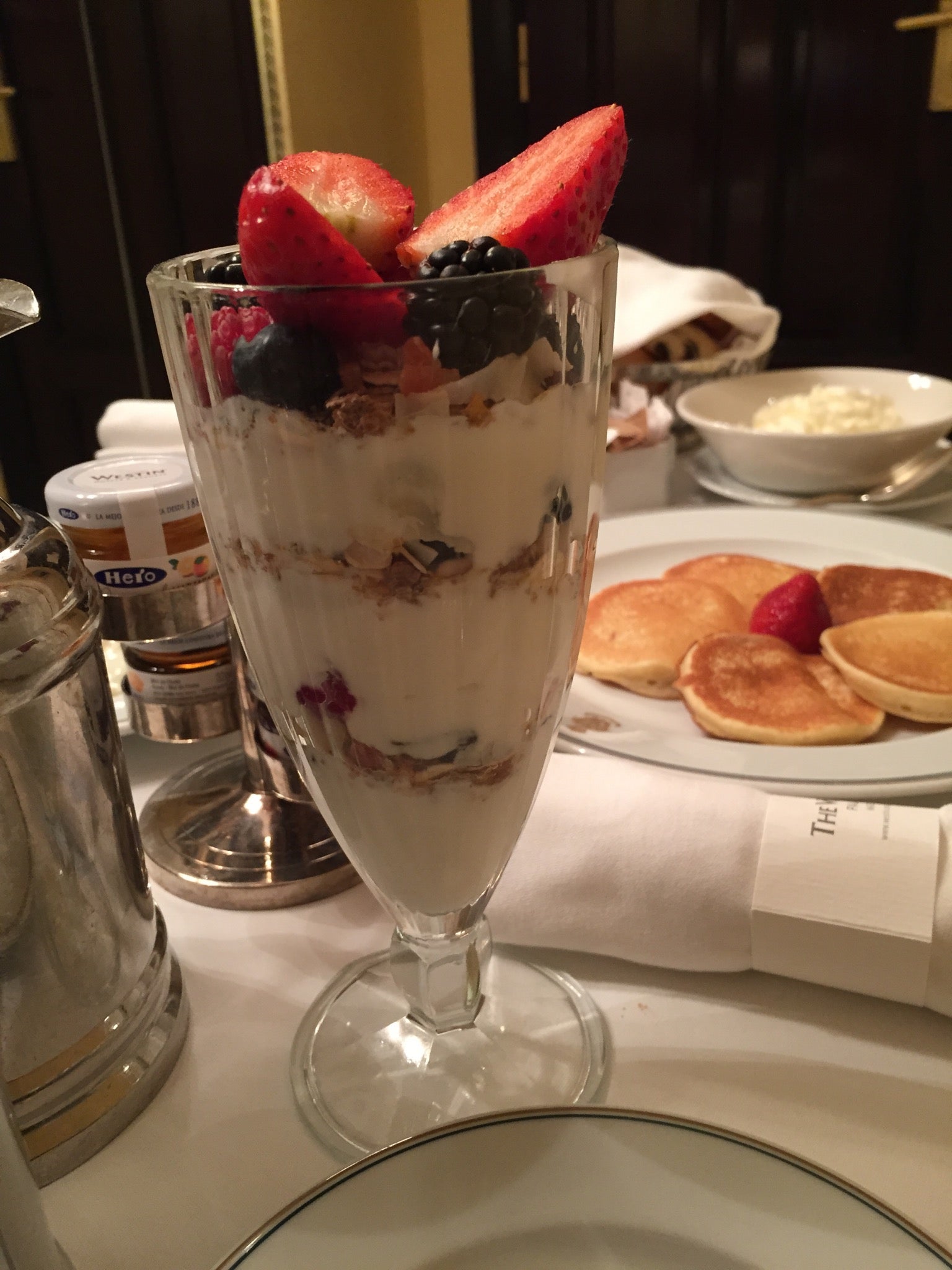 The hotel was beautiful, historic, well located, and very comfortable for our one night stay.  The going rate for our stay would have been about 300+ euros for the night, so I was pretty happy with our 14,500 SPG point redemption.  When you are able to book a standard room for just 12,000 points that is likely even a better deal!  If you are looking to rack up SPG points yourself for a similar trip, remember you can get 25,000 SPG points from both the Starwood Preferred Guest® Amex and the Starwood Preferred Guest® Business Amex after meeting the respective spending requirements.

It is worth mentioning that this hotel actively offers up-sells to larger rooms and suites, so if you want to book a standard room on points and then use cash to upgrade your family to a larger space there is a good chance the hotel will accommodate that request if they aren’t sold out.  On our night the price to upgrade to a junior suite was about 129 euros for the night.  We didn’t really need any extra space for the night, but that may be worth it for some travelers.

Overall it was a little bit frustrating to not have the room ready on time, but the hotel made up for it with some drinks in the bar while we waited.  We enjoyed the service in the bar, the room service breakfast, and the doormen were especially nice and helpful with all of our questions.  I’m quite happy wwe took the extra effort to move hotels and try something different while in Madrid.  While the Radisson Blu Madrid Prado was a heck of a deal on points when we booked it, it is substantially pricier on points now, and overall we enjoyed the Westin Palace Madrid more.

Summer Hull , aka Mommy Points, ran the Mommy Points site for families who want to travel more for less using miles and points for seven years. She now heads up a variety of special projects at TPG when she isn't exploring the world with her own two girls.
You might like
7 ways Delta One business class on the ‘new’ A350 surprised me — and 2 ways it didn’t
News
Yesterday
Deal alert: Travel to Costa Rica this fall for as low as $218 round trip
Deals
Yesterday
Dolly Parton just turned her glittery tour bus into the ultimate Tennessee hotel suite
News
Yesterday
Delta SkyMiles® Platinum American Express Card