Tips For Flying With Kids in First Class 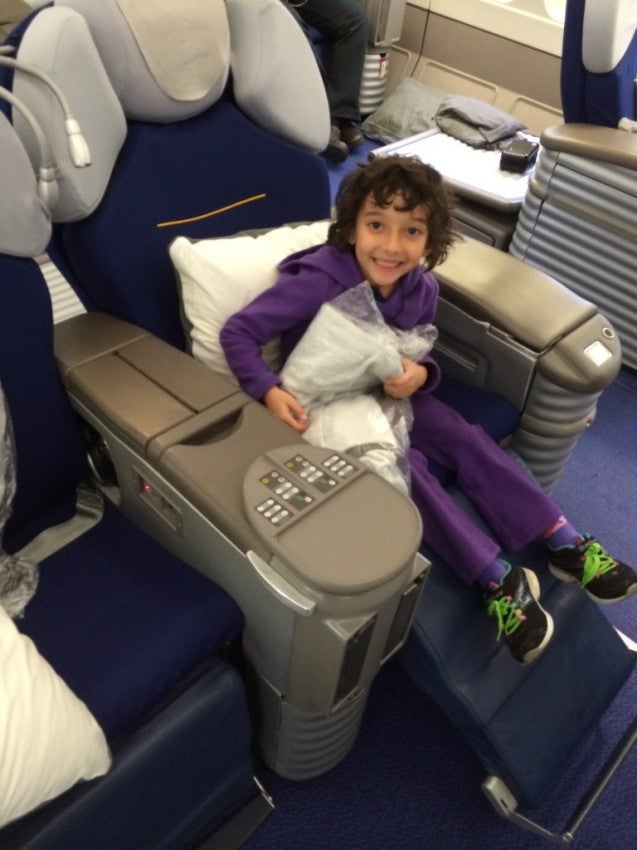 Tips For Flying With Kids in First Class
This post contains references to products from one or more of our advertisers. We may receive compensation when you click on links to those products. Terms apply to the offers listed on this page. For an explanation of our Advertising Policy, visit this page.

Though some airlines have banned kids from their first class cabin, you'll still find lucky little tykes traveling like tycoons from time to time. With that in mind, TPG Contributor Jason Steele shares his own experience flying first class from Tel Aviv to Denver via Germany with his six-year-old daughter on Lufthansa, as well as tips for parents considering taking their children on a first class trip.

In the world of travel, few things are as coveted as a flight in international first class. Recently, I had the opportunity to experience Lufthansa's first class, along with my six-year-old daughter on a flight from Frankfurt to Detroit. Here is what we learned from the experience.

Deciding Whether or Not to Take a Child

I can already hear the gasps of some readers who shudder at the thought of traveling with a child in first class. As a frequent business traveler myself, I too have tried to endure unruly children (and adults) in business and first class, and felt like their presence detracted from the experience. Yet the fact remains that children are welcome in first class (on nearly every airline) and it is always up to parents to ensure that their children are well behaved, no matter where they are.

In our case, we had already booked a return flight from Tel Aviv to Denver, with a quick stop in Newark in United's BusinessFirst. Because the impending devaluation of United's MileagePlus program on February, 2014 is going to affect first class partner awards most dramatically, we knew this might be our last chance to fly in Lufthansa first for a reasonable number of miles, and without fuel surcharges.

Each one-way partner award ticket from Tel Aviv to Denver in business class was 60,000 United MileagePlus miles, and we paid an additional 15,000 miles each to upgrade to first class. Furthermore, we incurred $75 in change fees and about $100 in additional taxes each to transit through Germany. By charging this to my American Express Platinum card, though, at least I was reimbursed for the $150 in change fees as part of its $200 annual airline fee reimbursement.

The next decision was whether or not I should travel with just my six-year-old, or try to book an additional seat for my wife and our one-year-old as a lap child. In the unlikely event that three first class award seats were made available, our lap child would be charged by 10% of the fare in dollars by United. Had we booked the flight with Lufthansa Miles and More program, our infant would have flown for free, but we would have incurred large fuel surcharges.

Since the normal one-way fare was 8,131 EUR (over $11,000), it just didn't make sense. If we did so, we would have incurred an $1,100 infant fare in order to upgrade my wife from her more convenient BusinessFirst itinerary, to a far more circuitous routing that happened to include one leg in Lufthansa's first. United's premium product lacks caviar, but we could purchase quite a lot of it with $1,100 saved! And, more importantly, I had my wife's blessing to split up and fly Lufthansa.

Preparing For The Trip

My daughter was thrilled to learn that we would be flying home in Lufthansa first class, but I made sure to impress upon her the need to be on her best behavior. In addition, I informed Lufthansa ahead of time that I was traveling with a child, as they are one of many family-friendly international carriers who will prepare special meals and amenity kits for children.

When packing for a first class trip with a child, I have two recommendations.

1. Bring along appropriate entertainment with a headset. If a business class lounge feels kind of like an office, the First Class terminal in Frankfurt has the ambiance of library. Thankfully, we packed an iPad along with an inexpensive noise cancelling headset so that she could watch movies and play games in the lounge without disturbing the peace and quiet of our fellow passengers.

2. I would strongly recommend bringing a half-empty carry-on to fill with all of the amenities you will be provided. We returned home with some children's toys from the lounge, an adult Rimowa amenity kit, a special child's amenity kit, and two sets of pajamas and slippers. Note that the pajamas she received were a women's size small, which were way too big for her but made the perfect gift for my wife.

Upon entry, we were greeted by a staff member who introduced herself as our personal assistant. I had read much about the baths, buffets, bedrooms, and bars available to Lufthansa first class passengers, but we were surprised to discover a children's playroom tucked into a corner behind the fabled bar. There, my daughter found a playmate to keep her occupied while we waited for our flight.

As is well known, Lufthansa offers a rubber ducky to both children and adults who bathe in its first class terminal and lounges. Although my daughter had her bath the night before, the staff was kind enough to offer her a ducky as a souvenir.

Finally, I was impressed that the Lufthansa representative in the first class terminal in Frankfurt asked my daughter her age, so that she could provide the appropriate children's car seat for our Mercedes-Benz ride to the aircraft.

As we found our seats on the Airbus A340-300, we were personally greeted by the two flight attendants responsible for the eight seats in first class cabin. Amazingly, there was only one other first class passenger on our flight that day. In fact, we never even saw another passenger on the jet-bridge or aircraft during the entire flight, making it feel almost like we were on a private jet!

On our day-time west-bound flight, we were satisfied with Lufthansa's old first class seats. Had we been on an east-bound, overnight flight, we would have preferred the new first class product, especially if it was on the 747-400 with a separate bed. Such a configuration would be ideal for parents traveling with a small child. Still, this aircraft was equipped with mounts that can be used to attach a bassinet to the bulkhead, which is idea for infants until about nine months.

My daughter appreciated the wide selection of children's programming available on the in-flight entertainment system, even if I found the screen to be a bit small. If we had to pick on just one slight disappointment, it would be that there was no specially prepared children's meal for the main course on our flight, just for the dessert.

On previous Lufthansa flights in business class, she enjoyed some creative children's meals. That said, my daughter found the soup served with both meals to be agreeable, although she didn't want to try the caviar. As for myself, I found both the service and cuisine to live up to my lofty expectations.

To my relief, she was able to pass the time happily by watching a few of her favorite children's movies and playing with some of the toys and games in her amenity kit. Maybe there was a small nap in there, but she neither of us were really tired after getting a good sleep the night before at the airport Sheraton hotel and departing mid-morning. Nevertheless, it was nice to see that the flight attendants closed all of the window shades and offered to make our beds, just in case either of us (or the other first class passenger) needed the sleep. I was able to catch up on a few movies as well, but after we had both had as much food and movies as we could stand for the day, we played a really neat children's card game together that was part of her amenity kit.

Upon reaching the gate, one of the flight attendants invited us to visit the cockpit, and even apologized that U.S. regulations did not permit her to do so during the flight! Apparently cockpit visits are only offered during non-U.S. flights.

Even on the ground in Detroit, Lufthansa staff would not let us forget that we were first class passengers. First they offered to walk us through immigration, but we both had Global Entry cards making it unnecessary. Next, a representative took our luggage off of the carrousel and escorted us past customs and though the terminal to the United representative who would check us in for our continuing flights. It might seem like a small gesture, but after landing at an unfamiliar airport with a small child after a nine-hour flight, it was nice to have some assistance transporting our two-weeks' worth of luggage across the terminal.

While some might scoff at the idea of bringing a six year old onto a first class flight, we had an amazing experience. Lufthansa is especially welcoming to children, and I am proud to say that my daughter acted appropriately at all times. We had an exciting journey that we will never forget, and I am grateful that we were able to do so at minimal cost in both miles and dollars.

In this four-part series, I'll show you how you can use your United miles to book a Lufthansa first class flight before the MileagePlus devaluation on February 1, and explore alternatives for the future. Then, I'll offer some tips on exploring Frankfurt during a layover. Finally, I'll explore the option of renting a Porsche while in Frankfurt.

For more information, see posts on:

Featured image by My daughter settled in in no time!