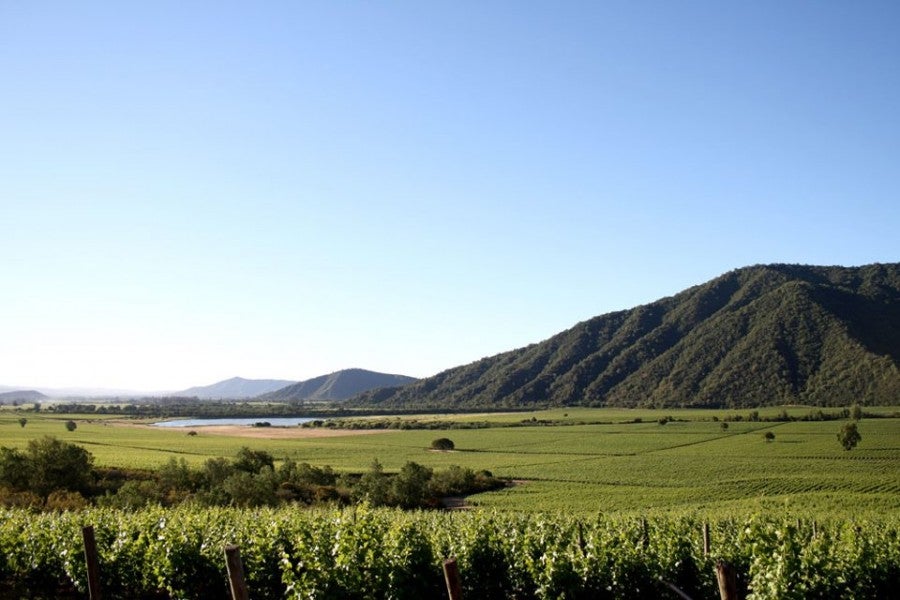 Wine Wednesday: Casablanca Valley, Chile
This post contains references to products from one or more of our advertisers. We may receive compensation when you click on links to those products. Terms apply to the offers listed on this page. For an explanation of our Advertising Policy, visit this page.

Welcome to another installment of our #WineWednesday series, where each week we give you a brief snapshot of wine regions all over the globe and insight on how to get there, where to stay and a few local places you might want to visit. Today, TPG Contributor Melanie Wynne invites us to explore the up-and-coming Casablanca Valley, just a few miles inland from Chile's central coast.

The Points Guy picked Chile as one of the top 10 destinations to visit in 2013 thanks to the cosmopolitan allure of Santiago and the artsy vibe of Valparaiso, Patagonia’s parks and glaciers down south, the otherworldly beauty of the Atacama Desert in the north, and the mystical charm of Easter Island. But as if these attractions weren't enough of a draw, this Southern Hemisphere country also features fourteen different wine regions, several of which are fast rising on the global oenology scene.

Vintages have been produced in Chile since the 1550s, making it the oldest wine-producing country in the Americas. Many of Chile’s current grapevines were splices from French roots planted in the 19th century, and thanks to its geographic isolation between the Pacific and the Andes Mountains, the country has some of the only non-phylloxera-infested vineyards in the world.

Chile's main flight hub is Arturo Merino Benítez International Airport (SCL) in Santiago, and getting there is easier and cheaper than ever thanks to a couple of new airline partnerships: Aerolineas Argentinas with SkyTeam, and LATAM with Oneworld. Delta flies there from Atlanta, American flies non-stop from Dallas/Forth Worth and Miami, and LAN offers direct service to New York-JFK, Los Angeles, San Francisco and Miami. With flight times that average 10 hours, it's good to know that all three airlines offer lie-flat beds in business class.

The Casablanca Valley is about 50 minutes northwest of inland Santiago and 30 minutes northeast of coastal Valparaiso. If you're not planning to stay out in wine country, Valparaiso - renowned for its 43 hills, vibrant street murals, and Starburst-hued buildings from the late 19th and early 20th centuries - makes an exciting base camp by the sea.

To travel the 90 minutes from SCL to Valparaiso, the most economical option is the Tur-Bus, with rates starting at 1,900 CLP ($4) each way. The two seat classes to consider are clásico, your average padded bus seat that reclines just a little, and semi-cama, which reclines halfway back for a bit more relaxation.

Renting a car from Santiago is a costly option (averaging about $60 per day for an economy model), and if you're planning to drive to or in Valparaiso, navigating the city's traffic, winding streets and blind corners could well prove very stressful. Better to let Valparaiso's historic streetcars and funiculars cheaply and easily transport you all over town. If you do choose to rent a car to tool around the Casablanca, though, be assured that its main road, the Ruta 68, is generally wide, well-paved and clearly marked.

The safest (and arguably the most convenient) option for exploring this wine region is to hire a tour guide. Just about everyone in the area's tourism industry speaks English, and most companies - like the professional and well-versed guides of Santiago Adventures - offer both day trips and multi-day excursions.

First planted with vines back in the mid-1980s, this is Chile's first coastal wine region, beginning just 2.5 miles inland from the Pacific Ocean. Cooled by morning fog and afternoon breezes and renowned for its chalky soil, the Casablanca yields some of the world's most nuanced, bright and mineral-driven Sauvignon Blancs, as well as typically lightly oaked Chardonnays and elegant, spicy Pinot Noirs.

Most of the wines produced here have yet to make their way to North America and Europe, making a Casablanca winery hop one of your best opportunities to try them. Most of its wineries are set off Ruta 68, clearly marked by brown road signs. Tastings tend to hover around the $30 mark (per person), but are often accompanied by local nibbles and are offered with no obligation to purchase.

Veramonte was the Casablanca's first major commercial winery, begun in the early 1990s by Santiago native Agustin Huneeus, who was just about the only person who saw the region's potential for great white wines at the time. The creator of Napa's Quintessa winery and producer of the cult red blend The Prisoner, Huneeus has turned Veramonte's minerally Sauvignon Blanc into an international success as well. At the winery's expansive, Napa-style visitor center, you can taste it and others (like a Chardonnay, Rosé and/or Pinot Noir, as well as offerings from Veramonte's various sister labels) at group tastings that can include a property tour and a small pairing of cheese.

Formerly the sprawling hacienda of the prominent Diaz family, Loma Larga has been a commercial winery since 1999. Specializing in vibrant, oak-free Sauvignon Blancs (the 2012 is a fruit-forward standout) and Pinot Noirs redolent of roses, tastings here include splashes of four elegant wines in a homey, Spanish-style room that was once a kitchen, and a stroll past fragrant, flowering vines and through a splashy, neon-lit barrel cellar. You can also pre-arrange for a barbecue lunch out in the hacienda's courtyard or a tour of the vines on horseback.

Kingston Family Vineyards was originally a dairy farm run by a married couple from Michigan who came to Chile in the 1920s to pursue a fortune in copper mining, but instead fell in love with this land. In 1998, the farm began planting its heavy-clay, iron-rich soil with grapevines, soon producing sought-after grapes for about 20 area wineries. Only recently, overseen by granddaughter Courtney Kingston, they've begun to make their own wines, fermenting most of their grapes in plastic bins and producing about 37,000 hand-labeled bottles per harvest. These complex vintages are named after the Kingston family's favorite horses, and include an earthy, chocolatey Pinot Noir with a Wine Spectator rating of 91. Tastings include four wines and a gorgeous plate of locally-made cheese, bread and herbed olive oil.

A unique project between Chilean and New Zealand winemakers, the small-production Casas del Bosque's vineyards sit on a blend of clay and granite soil, and the winery is especially focused on Sauvignon Blanc. Chardonnay, Riesling, Pinot Noir and Syrah are also produced here from carefully hand-thinned vines. The winery's Cabernet Sauvignons and Carmeneres use grapes grown in warm-weather valleys to the east. Tastings of three or four wines are held in the 242 Aromas bar, or you can order a picnic from the on-site restaurant and wander with it (and some wine) out to the property's peaceful man-made lake.

The showcase for a collection of small-production labels, the star attraction at House (formerly known as the House of Morandé) is the Chilean cuisine and mostly Casablanca wine pairings in its restaurant. (The floor-to-ceiling view of the vines isn't too shabby, either.) Consider treating yourself to the tasting menu for $23,900 CLP ($48), which can include a spectacular mixed ceviche with (relatively) local razor clams and a luscious chocolate cake that pairs surprisingly well with an unusual late-harvest Sauvignon Blanc. After lunch, take a spin around the shop to purchase merken, a popular Chilean chili spice, or a bottle of the spicy Syrah called Tiraziš, a name which acknowledges the Iranian origins of the grape.

For a more casual, folksy lunch, try the nearby Casa Botha, a local favorite run by a South African chef/musician and his Italian wife. Popular for their handmade pastas (like a gnocchi with house-smoked salmon), they also offer rustic meat-and-potatoes Chilean specialties. The wine list is made up exclusively of Casablanca Valley vintages. The on-site shop sells some of these wines, as well as crafts, jewelry and housewares made by local artists.

Local lodgings are scarce in the Casablanca Valley, so the centrally-situated Hotel Casablanca gets the lion's share of attention. With both a traditional hotel and a handful of two-story log cabins, as well as a pool, restaurant and on-site quincho (a Chilean barbecue hut), you can rest up and enjoy breakfast and dinner on either side of a day of wine tasting. And if the prospect of all that wine tasting leaves you feeling strung out, visit the Spa Wine treatment room for a soak in the jacuzzi and creams/oils made with grapes. Room rates for doubles start at $155, cabins at $174.

If you choose to stay in Valparaiso, check into the lovingly restored Palacio Astoreca Hotel, a bright red, multi-story sprawl of art and design overlooking the port, the city and the sea. Opened by a local artist in October 2012, each room has a different color scheme and hand-printed wallpaper; bathroom floors feature hand-fired Chilean tiles; and the turn-down amenity is a delicate house-made macaroon. A wood-fired hot tub sits at the bottom of a narrow atrium open to the sky, looking up at a soaring, living wall of plants, all set beside an intimate spa and a placid indoor pool. The on-site Restaurant Alegre cooks up some of the city's most inventive cuisine, including crudo served in a whimsical sardine can, and a fanciful dessert designed to mimic the tastes of Life Savers and Pop Rocks. Room rates for doubles start at $230 per night.

With some of the world's most unique soils, blending multiple combinations of clay, granite, iron and shell, the Casablanca Valley is fast rising as Chile's most popular region for bright and complex white wines. A reputation for elegant reds doesn't hurt matters, nor does a penchant for modern architecture, biodynamic farming and an emerging culinary scene that's taking traditional Chilean ingredients like quinoa, choclo corn and Southern Hemisphere seafood out for a new, artful spin. A wine tasting trip here may just upend the way you feel about vintages from California, Europe and the Pacific Rim - and inspire you to try even more of Chile's wine valleys.
[card card-name='Starwood Preferred Guest® Credit Card from American Express' card-id='22034416' type='javascript' bullet-id='1']