Is Hotel Room Service Going to Be a Thing of the Past? 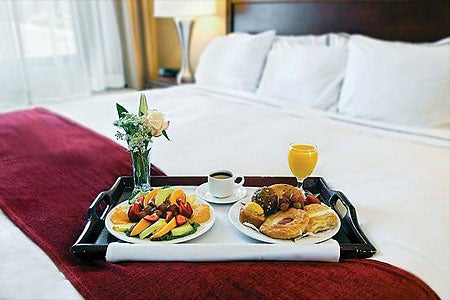 Is Hotel Room Service Going to Be a Thing of the Past?
This post contains references to products from one or more of our advertisers. We may receive compensation when you click on links to those products. Terms apply to the offers listed on this page. For an explanation of our Advertising Policy, visit this page.

With news that the New York Hilton Midtown – the largest hotel in the city – will discontinue room service and instead open an all-day cafeteria-style restaurant with grab & go options beginning in August, the travel industry was abuzz with talk of whether this is the beginning of a larger trend and what travelers should expect from hotels moving forward.

I have to say that personally, I use room service quite a lot. I know, I know, it’s usually very expensive and there is cheaper food to be had elsewhere (even at a hotel’s own restaurants), but I like having it available for convenience’s sake – especially when I wander into a hotel bleary-eyed after flying all day and just want a good sandwich without having to trek out into the streets. Or if I need to get up early and get some work done in the comfort of my room without having to get dressed and get downstairs to the restaurant where WiFi might or might not be readily available and slog through a meal alone.

On the flip side, room service can take forever to arrive, it can come late, or early if you’ve asked for breakfast, waking you up before you need to be – so what I’m saying is it’s not a perfect service, but it’s an amenity that I personally value and I'd think twice about staying at a full-service hotel if they didn't offer it.

In this case, Hilton is supposed to replace its room service, which the Crain’s article notes is very expensive to maintain and requires a staff of 55 at a hotel of its size (2,000 rooms) with a healthy cafeteria option with grab & go plates and paper bag meals for travelers on the go.

It would be great if this new outlet were indeed quick, cheap and healthy – especially since eating healthily on the road can be really difficult at times – but I have a nagging suspicion that instead of tons of fresh produce and veggies we’ll see your average array of hotel snack shop goods like old bagel sandwiches, cups of soup and bags of chips and popcorn with maybe a few apples and bananas thrown in for good measure.

In terms of what I think this means for the hotel industry overall…it’s not new for hotels to ditch room service. After all, it’s probably one of the most expensive amenities to maintain and is not usually a moneymaker. Plus, travelers have gotten used to fending for themselves at 3-star and below properties where there might be a buffet breakfast, but that’s it.

What is new is that a hotel at this level is foregoing room service. The New York Hilton Midtown is rated four stars and room rates usually start at $200-300 per night. It’s also an HHonors category 9 (out of 10) property where award nights range between 60,000-80,000 points per night. That puts it at the high end of the Hilton spectrum and makes it a property where guests (rightly) expect some of the finer amenities like room service, which is a more fundamental service than, say, a spa, which the Hilton Midtown does not have either.

I think that we stand at a crossroads at the moment where hotels are looking more and more at their bottom lines and are more willing to sacrifice amenities in order to save some cash at the end of the day, especially in competitive markets. Does that sounds familiar? If it does, that’s because it’s the same thing that airlines have done over the past decade and why we’re living in a time of mounting airline fees for basic services like checking luggage or choosing a seat ahead of time. Come to think of it, hotels have been doing this for a while now with bogus mandatory "resort fees" to help pay for amenities like the pool. As if that couldn't just be part of the room rate, since you know, people book a resort to use such amenities.

On the bright side, I also think that as the economy continues to gather steam and more and more business and luxury travelers start booking rooms, hotels will refocus their energies on what pleases these bread-and-butter customers and room service is likely to be among them, especially at higher-end hotels.
[poll id="35"]
[card card-name='Ink Bold® Business Charge Card' card-id='22125763' type='javascript' bullet-id='1']

Featured image by I just want to enjoy breakfast in the comfort of my room.