Destination of the Week: Dubrovnik, Croatia 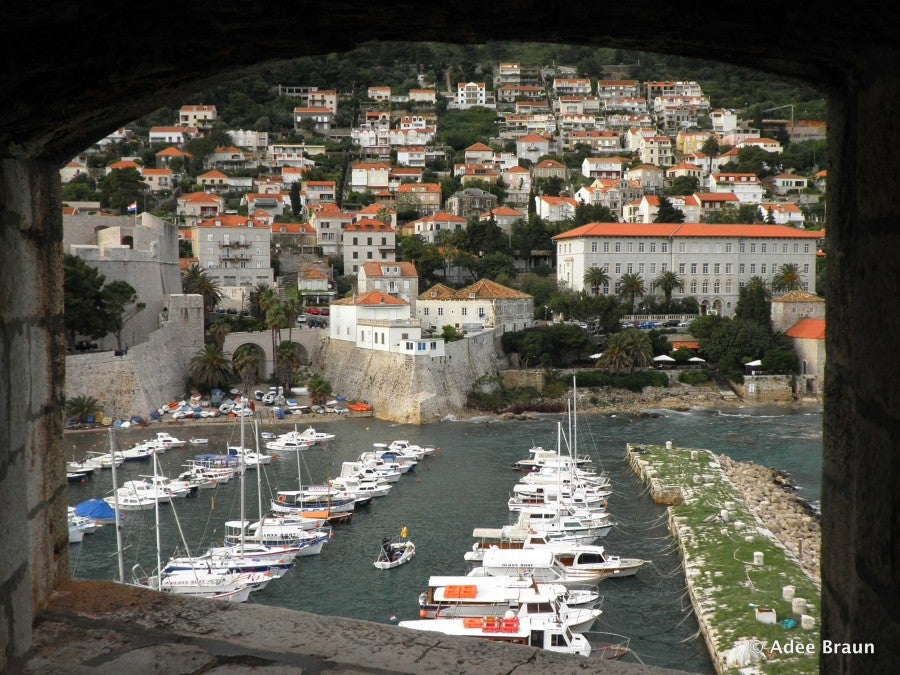 Destination of the Week: Dubrovnik, Croatia
This post contains references to products from one or more of our advertisers. We may receive compensation when you click on links to those products. Terms apply to the offers listed on this page. For an explanation of our Advertising Policy, visit this page.

For today's Destination of the Week, TPG contributor Adee Braun takes us to a medieval fortress town that is one of her favorite seaside destinations. It is packed with history, beauty and plenty of dramatic views. We’re headed to Dubrovnik, Croatia.

WHAT TO DO
Croatia's most-visited city, Dubrovnik is a medieval town that sits on a little outcrop on the Adriatic Sea. The Old City is entirely fortified, a strategic medieval military decision that today gives the town its unique character (and a mighty good location for cliffside bars with spectacular views). The fortification did not stop the Venetians from ruling over the city for 150 years, and later Napoleon, followed by the Austrians and the Hungarians. The result is a unique blend of architectural, cultural and culinary influences. The city’s characteristic marble streets have been well-trod by tourists since the end of the Balkan Wars. But forgiving the throngs of visitors, chintzy souvenir shops and overpriced food is relatively easy because, well, it’s just so beautiful.

The fortified Old Town is tiny and entirely car-free. There are only a handful of distinctive sights, but the entire town is a UNESCO World Heritage Site. The true joy of visiting Dubrovnik is found in meandering through the medieval passageways at dusk, peeking into flower-lined courtyards and lingering at outdoor cafes surrounded by Renaissance palaces. Most visitors enter the Old Town through the Pile Gate with a drawbridge over a dried moat. Extending from the gate is the marbled Placa Street which cuts straight through the center of town.

There are several notable churches and monasteries throughout the city, one of the most striking being the Franciscan monastery and museum, which includes a lush cloister and the oldest working pharmacy in Europe. At the end of Placa Street is the Clock Tower that dominates the Dubrovnik skyline. Across the square is the Sponza Palace, an imposing structure which was originally a customs house and today houses the state archives. There are several lovely fountains that were part of a 12th-century water system. The Onofrio Fountain sits by the Pile Gate and the Little Onofrio Fountain flanks the other end of Placa Street by the Clock Tower. Around the corner is the Rector’s Palace which was once the seat of Dubrovnik’s government and today houses a museum devoted to the history of the city. There are several other notable museums including the Ethnographic Museum, Maritime Museum, Museum of Contemporary Art, and War Photos Limited, a gallery devoted to war photography including a permanent exhibit on the Balkan Wars.

The best way to see the city is by walking above and around it. That is, along the city walls which wrap around the city for over a mile. From atop the narrow wall you can see across the sea on one side and over the patchwork of terracotta roofs on the other. There are several cafes along the wall serving light food and drinks. Linger and enjoy the atmosphere with a glass of crisp Croatian wine in hand and the crashing Adriatic on the rocks below. Food within the city walls can be overpriced and mediocre. But fine dining with views can be found at 360 Restaurant which looks onto the harbor and offers regional food with international twists. More food options await outside the fortification in the seaside restaurants, or konobas, that serve up fresh local seafood while you go for a dip.

Most beaches around Dubrovnik are both pebbly and private. But a great way to get some beach time is on one of the nearby islands. Lokrum Island is a small wooded island less than a mile from Dubrovnik with a botanical garden and the ruins of a medieval monastery. Boats also take visitors to the Elafiti Islands, a small archipelago about 30 minutes from Dubrovnik. Ferries run frequently in the mornings during the summer months.

YOUR EXPERIENCES
Destination of the Week pieces are not meant to be comprehensive guides to destinations since we don’t have the time or funds to visit all these places in person and report back to you. Nor are they endorsements of all the hotels we mention. They are simply roundups of top destinations that we have specifically pinpointed for the opportunity they present to use your miles and points to get to and stay there. As always, we welcome your comments to help enrich the content here, provide opinions and first-hand experiences of these destinations.

GETTING THERE
When it comes to getting here, none of the major US carriers fly to Dubrovnik, whose airport serves the very southern part of the country. The Zagreb airport, almost 400 miles away, is Croatia’s largest. Croatia Airlines is the national carrier, however there are many other carriers, but most of them only offer seasonal service. Croatia Airlines is a member of the Star Alliance, so you'll most likely have to connect when coming in from the US. Dubrovnik’s Čilipi Airport is located about 12 miles from the Old Town. Atlas Buses run frequent service to the bus station at the port in Gruž for 35KN (~$6) and takes about 30 minutes. From there you can take a 5-minute taxi ride to the Old Town. A taxi straight from the airport to the Old Town costs about 250KN ($42). Public buses operated by Libertas run frequently from the airport to the Old Town. A ticket costs 10KN ($1.69) if you buy it at a kiosk, or 12KN ($2.03) if you buy it on the bus.

Hilton
Hilton Imperial Dubrovnik: This is a palatial hotel in pink and white with gilded balconies. Located steps from the Old Town, the hotel offers convenient and contemporary accommodations. The more humble interior has generously sized rooms simply decorated in warm tones and wood accents with marble bathrooms. WiFi access is available for a fee in the guest rooms, but free in the public areas. Hotel amenities include a fitness center and a pool. The Porat Restaurant serves contemporary Mediterranean cuisine with local ingredients. The Lounge Bar located on the balcony of the restaurant offers drinks and light food, as does the Lobby Bar. Rates in June start at 225 EUR ($290) per night. This is a Category 8 property and requires 70,000 Hilton HHonors points for a free night redemption (40,000-70,000 seasonally).

Radisson Blu Resort & Spa, Dubrovnik Sun Gardens: This large beachfront resort is located about a 20-minute drive from the Old Town. The hotel offers a gym and lots of options for sports enthusiasts with tennis, beach volleyball, squash and badminton courts, a soccer field and rock wall. The hotel also offers “Jet Ski Safaris” to explore the surrounding islands. The extensive spa offers an abundance of different treatments, or you can just relax by the waterfall in the lagoon pool, or in the aromatherapy steam room followed by an invigorating cold plunge. Rooms are simply furnished in marine colors and blonde wood and wide windows, many overlooking the cobalt Adriatic Sea. Guests have free Wifi access in all the rooms. The hotel also offers some three-bedroom apartments for families. There is an abundance of restaurant and bar options that range in cuisine and style, though the theme remains more or less Mediterranean. This resort is a Category 6 hotel requiring 50,000 Gold Points or room rates starting at 225 EUR ($290) in June.

Villa Dubrovnik: This seaside hotel is just under a mile outside the Old Town. It’s a gleaming white modern resort that hangs off the cliff, with balconies that sit right over the shimmering Adriatic. Rooms are compact and minimalist in design with lots of glass and mirrors to make the most of the views and light. Even the balcony railings are glass, lest your feet miss the spectacular views. All rooms have sea views either of nearby Lokrun Island or the Old Town, flatscreen TV’s and WiFi. Additionally, the resort offers private residences in the nearby Villa Kolin. Back at the main building, Restaurant Pjerin serves Mediterranean small plates and the Al Fresco Bar Giardino offers more casual meals on a balcony perched over the water. The Prosciutto & Wine Bar has lounge seating on a balcony with the same viewing trifecta of water, island and Old Town (trust me, it does not get old). The more somber Library Lounge lures you back indoors for some tea and literature. There’s also a fitness center and a spa (with more spectacular views) with a tranquil pool, balcony for more sunbathing and lounging, saunas and massage treatments. Or, bring your water shoes (those pebbles are not kind on the feet) down to the resort’s private beach for a swim. Rates in June start at 375 EUR ($480) per night.

Hotel Bellevue Dubrovnik: Another sleek cliffside hotel, this one is about a mile on the other side of the Old Town. The hotel overlooks a private beach on the Miramare Bay. The room interiors are decorated in neutral tones and warm woods so as not to compete with the star attraction: the miles of blue water outside your window. Rooms also come with free WiFi, flatscreen TVs, slippers, bathrobes and L'Occitane products. The spa includes a lagoon-shaped pool and Jacuzzi that overlook the sea, a fitness center and massage treatments. You’ll find a Mediterranean menu at the Vapor Restaurant and more international influences at the less formal Nevera Restaurant and more sea views. The Spice Lounge offers cocktails and small plates to go with your sea-gazing. Rates in June start at 335 EUR ($430).

Dubrovnik Palace: This modern cliffside hotel sits in a secluded part of the bay surrounded by pine trees. Rooms are modern with lots of natural colors and textures and include flat screen TVs, WiFi, bathrobes, slippers and, oh yeah, a private balcony for equal opportunity water-viewing. Amenities include a fitness center, spa, three outdoor and one indoor pool, Jacuzzi, sauna and Turkish bath. The Lanterna Glorijet poolside bar offers post-swim refreshments. The hotel’s three restaurants range in price and style but are heavily Mediterranean inspired with lots of seafood and other local ingredients. Room rates start at 180 EUR ($230).
]