Past and Future Airline Mergers: A Brief History and Predictions 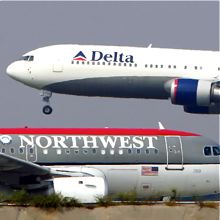 Past and Future Airline Mergers: A Brief History and Predictions
This post contains references to products from one or more of our advertisers. We may receive compensation when you click on links to those products. Terms apply to the offers listed on this page. For an explanation of our Advertising Policy, visit this page.

With the merger announcement of US Airways and American last week, I thought I’d take a look back at some of the other major airline mergers of the past 15 years or so and what they have meant for the industry in general.

The domestic airline industry in the US has been rife with mergers and takeovers in the past decade or so, trundling along a path toward consolidation while still maintaining some fierce competition among the major players.

In July 1997, ValuJet announced plans to acquire Airways Corporation, Inc., the holding company for AirTran Airways. The deal closed in November of that year. The new entity held onto the AirTran name, with their hub remaining in Atlanta.

With financial problems underfoot at TWA, American made a move and acquired the airline’s sizeable assets (estimated value was approximately $2 billion) in April 2001. TWA filed for its third bankruptcy the next day and flew its last flight as TWO on December 1, 2001.

Already facing financial difficulties and a failed takeover bid from United, the terrorist attacks of September 11 led to especially difficult financial straits for US Air – the largest carrier out of Washington National at the time. The airline filed for bankruptcy in 2002 and in 2003 began to explore a possible merger. Finding no takers, US Air again filed for bankruptcy in 2004 and the next year, America West initiated a merger of the two airlines, taking US Air out of bankruptcy and maintaining the US Airways name.

Between 2005 and 2009, Republic Airways Holdings made a move on several largely regional carriers including Shuttle America, Midwest Airlines and Frontier Airlines. In 2012, Midwest and Frontier were merged into a single airline, keeping the Frontier name.

Following an April 2008 bankruptcy filing by ATA (formerly known as American Trans Air), Southwest purchased the airline and all of its assets for $7.5 million.

Approved in October 2008, the merger of Delta and Northwest created the world’s largest airline at the time. The integration of the two was finally completed in January 2010, maintaining both the Delta name and Atlanta headquarters.

Delta’s status as the world’s largest airline would not last long. In May 2010, just a few months after the Delta/Northwest merger was complete, Continental and United announced that they would be joining forces. A deal that closed in October of that year. The new airline, operating under the United name, overtook Delta as the world’s largest airline by passenger traffic in 2011.

2013 – US Airways and American Airlines Merge

As I’ve covered extensively over the past few months, the latest mega-merger was just announced last week – with US Airways putting up the cash to bring a struggling American Airlines out of bankruptcy in a deal that is expected to close later this year and create a new winner in the “world’s largest airline” battle. The new company will operate as American Airlines.

In December 2012, Delta announced plans to buy 49% of Richard Branson’s airline at a cost of $360 million, a stake previously owned by Singapore Airlines. The deal opens up connections for Delta between the U.S. and U.K. – previously, for example, Delta only had three daily flights between NYC and London (this deal will expand that number to nine), while American Airlines and British Airways have a combined 14.

Of course, it’s not just US airlines that have been playing the merger game, lately. Several large international airlines have been poaching their competitors and partners to create consolidated carriers all over the world.

In September 2003, Dutch carrier KLM and French carrier Air France announced a merger plan that would see them join forces under a new parent company, Air France / KLM. The deal was approved in February 2004 and the two airlines continue to operate as separate entities with hubs in Paris (Charles de Gaulle) and Amsterdam (Schiphol).

From 2005 through 2009, Lufthansa made a move on several smaller European carriers, acquiring Swiss Air, Austrian Airlines and BMI (which they subsequently sold to British Air in 2011) in separate deals. Lufthansa also purchased 19% of U.S. carrier Jetblue in 2007.

In September 2006, Cathay Pacific (already an 18% owner of Dragonair) completed its purchase of Dragonair, continuing to operate it as a separate albeit downsized regional entity.

In 2006, having recently become Germany’s second largest airline, Air Berlin began a series of acquisition of several regional airlines that included German carriers dba (2006 – though brand was discontinued in 2008), LTU (2007 – brand discontinued in 2009) and LGW (2007), in addition to Swiss airline Belair (2009) and Austrian carrier flyNiki (2011).

In December 2009, the Prime Minister of Jamaica initially approached Caribbean Airlines to discuss a possible merger, and a deal was completed in May 2010. The government of Jamaica maintained a 16% share in the new company.

Columbia’s Avianca and El Salvador’s Taca Airlines announced their merger in February 2010. The deal is expected to be completed during the first half of 2013, and will operate under the Avianca name with headquarters in Bogota.

In 2012, Chilean-based carrier LAN entered into a merger agreement with Brazil’s TAM Airlines – a deal that was completed in June 2012. Headquarters for the new LATAM Airlines remain in Chile.

Dublin-based Ryanair, Europe’s largest budget airline by number of passengers, recently made its third attempt to take over Ireland’s flagship carrier Aer Lingus with a $942 million offer. It appears, however, that the attempt will be blocked for the third time by the European Commission, who fears that the deal would leave the country too dependent on one airline.

Starting an airline is an expensive proposition – let alone continuing to operate and maintain it, so it’s no wonder that with so many variables from oil prices, economic slumps, foreign wars, jetsetting tastes and more, that airlines fall into financial straits all the time, making them prime targets for takeovers and buyouts.

So with all these mergers, are we bound to see a lot more in the future? Will we eventually just have one or two major airlines in each market? I don’t think so – the world is a big place and there are plenty of routes to fly, hubs to operate out of and competition from carriers both foreign and domestic to keep things interesting.

That said, I do think there is room for a few more mergers out there. I’m not going to play the prediction game, but one that wouldn’t surprise me (though it would be a long way off) would be a takeover of Alaska Airlines by Delta.

The two have been partners for years, and recently merged many operations up and down the west coast through codesharing and tightening up international and domestic connections. I wouldn’t be surprised if Delta put a bid in on Alaska since the two already cooperate on routes and frequent flyer programs and taking over Alaska’s network would give Delta an extremely competitive edge on the entire US West Coast.

In terms of foreign carriers, I think we’re bound to see something happen with Iberia in the near future since the airline just cannot seem to kick its financial woes – perhaps British Airways will spin it off to another European carrier.

I also wouldn’t be surprised in the Middle East carriers – Emirates, Etihad and Qatar – get into the merger game either with one another or perhaps by taking over an airline in another region of the world like the South Pacific (I’m thinking Virgin Pacific, operating out of Australia) or one of the European airlines to expand its reach farther west.

This is all (fun!) speculation at this point, but the bottom line is, even though we’ve seen several major mergers that have pared down the overall number of airlines operating in the world, I don’t think we’ve seen the end of industry consolidation by a long shot.
[card card-name='Ink Plus® Business Credit Card' card-id='22129636' type='javascript' bullet-id='1']

Related stories
What are points and miles worth? TPG’s December 2022 monthly valuations
Capital One Venture X to lose Priority Pass restaurants and spa services as of Jan. 1, 2023
December 2022
Current Hyatt promotions: Bonus points on stays and dining plus double stay credits
Featured image by The Delta Northwest merger created the world's largest airline at the time.