The Pinkest Place on Earth: The Royal Hawaiian in Honolulu 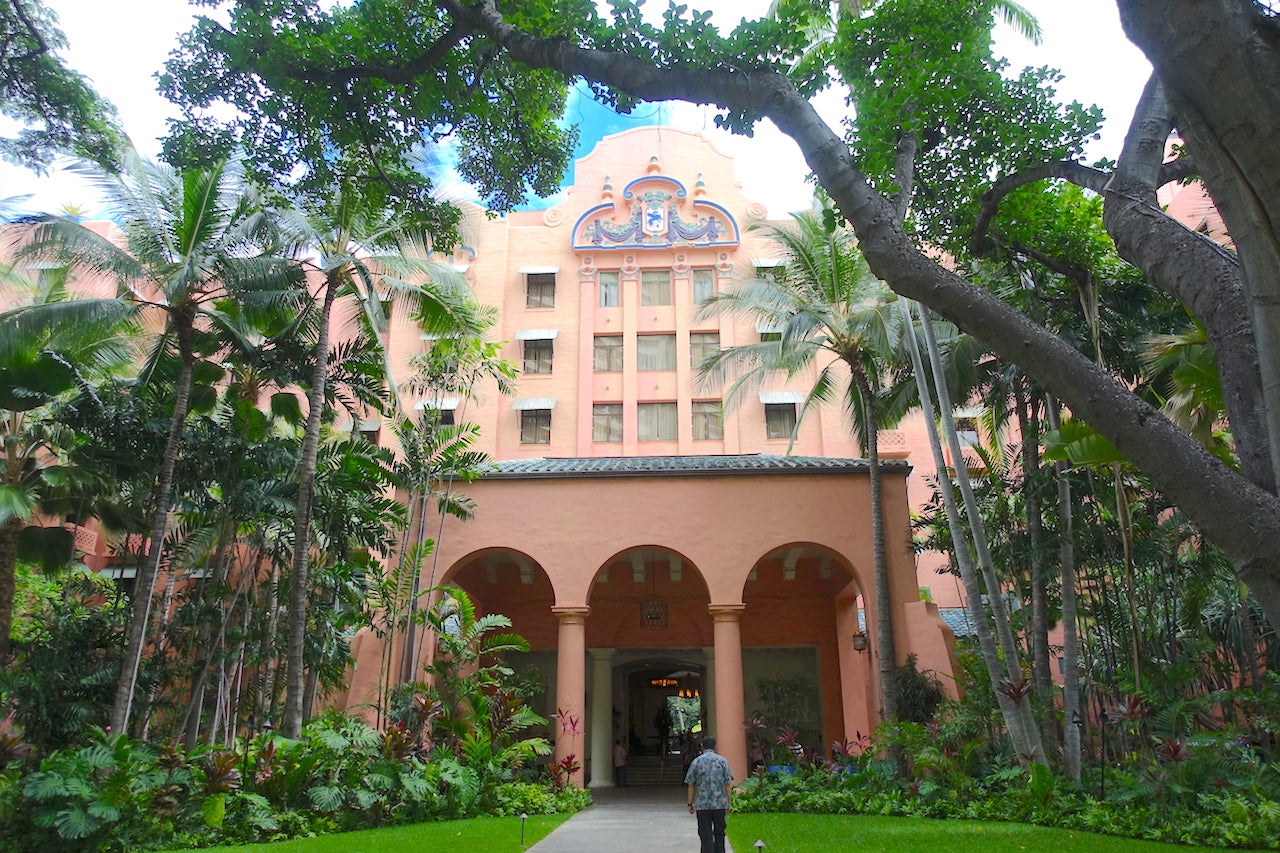 Affectionately known as the Pink Palace of the Pacific, the Royal Hawaiian is a Luxury Collection (formerly SPG, now Marriott) property dating back to 1927, making it one of the oldest hotels on the island of Oahu. Known for its rosy stucco façade and Spanish-Moorish architecture, the hotel is one of the most distinctive properties in all of Hawaii — and it occupies an enviable stretch of Waikiki Beach.

During my recent tour of Oahu points hotels, I was delighted to spend two nights at the Royal Hawaiian, given its extensive history and reputation in the industry. But the moment I strolled into the lobby, I was immediately struck by the thought that this grand dame might simply be a 91-year-old lady.

As I've mentioned elsewhere, I'm not currently pursuing status with any hotel chain, but in this case, booking directly through Marriott made sense, as TPG was able to book my stay through his account, which entitled me to top-tier elite benefits. At the Royal Hawaiian, this meant an upgrade to a junior suite, which I'll describe in more detail later. Rooms definitely aren't cheap at the Pink Palace — mine cost $380 per night. I put the $760 total on my Chase Sapphire Preferred card, earning me 1,520 Ultimate Rewards points (worth about $30) in the process.

Award stays won't come cheap, either. The Royal Hawaiian is a Category 7 property in the Marriott Rewards program, meaning you'll have to pay anywhere from 50,000 points for an off-peak award night to 70,000 points for a free night in the peak season. If you're running low on Marriott points, consider signing up for the Starwood Preferred Guest® American Express Luxury Card, which is currently offering a 100,000-point welcome bonus after you spend $5,000 within the first three months of account opening. Don't delay, though, as this offer expires on Oct. 31.

A true oceanfront property on Oahu’s iconic Waikiki Beach, the Royal Hawaiian is second in age on the island only to the neighboring Moana Surfrider.

Roughly 30 to 45 minutes from the airport, depending on traffic, the Royal Hawaiian occupies 14 acres, with entrances on both the beach as well as the upscale Kalakaua Avenue. The hotel also shares a roundabout with its sister property, the Sheraton Waikiki.

Somehow, I always manage to enter hotels the wrong way. Walking from the nearby Laylow hotel, I approached the Royal Hawaiian from its somewhat less grand back entrance.

The property made an immediate impression, though what that impression was, I’m still not entirely sure. "Pink" was the first thing that came to mind. And the second.

The lobby where guests checked in and chatted with the concierge was to the side, in an open-air space that was rather dim.

As an SPG member, I was able to check in with a designated front-desk host, who explained the myriad perks and details of staying at the Royal Hawaiian. I glossed over most of them after being told I could redeem a voucher for a complimentary baked good from the hotel’s on-site bakery.

Because the reservation was made by an SPG Platinum member, I was upgraded upon arrival. And it was a significant upgrade, propelling me from a base-level garden-view room to a sprawling junior suite. Guests with such status could select from an array of benefits, including complimentary breakfast for two.

A left out of the elevators, a right down the hall, a left around a curve — there may have even been a U-turn or a rotary involved in finding my suite at the end of a dim hall.

All of the rooms in the historic wing of the Royal Hawaiian had exquisite carved wood doors. When I finally found mine, I discovered a massive — and wildly disproportionate — room with a large, separate living space and a sadly undersized bathroom.

As a solo traveler, I simply had no use for a junior suite, and would have much preferred a smaller room with an ocean view or a brighter space in the contemporary Mailani Tower. Nonetheless, I kept the door to the separate living area closed, for fear of boogeymen and, more practically, leaving things in there and forgetting about them upon checkout.

The room also featured a massive closet with a safe and pink striped bathrobes. It was nearly as large as the bathroom, which, for a junior suite, was really cramped.

Though it was contemporary and polished with marble, glass doors, Malie Organics amenities and contemporary fixtures, the door to the bathroom couldn’t even open all the way, because the towel rack interfered with the clearance.

Yes, I was pining for a deep soaking tub. But with a room big enough to comfortably sleep a family, the bathroom could certainly have done with double vanities and a separate shower, if nothing else.

In general, the room had that old traditional-hotel vibe, but everything was well-maintained. Massive windows overlooked the grounds, though the view was not especially pretty.

The Royal Hawaiian had a single on-site restaurant that shapeshifted throughout the day. In the morning, it was the Surf Lanai, offering an upscale (and expensive) buffet and a variety of a la carte items. In the evening, it was the seafood-centric Azure.

For breakfast, I plowed through the buffet before an early-morning flight to Lanai. In addition to the hot and cold selections (exotic fruits, miniature açai cups, Belgian waffles, pork hash), guests who forked over $42 for the breakfast buffet could select a single kitchen entrée. I opted for the crab omelet with avocado, spinach and mozzarella, which I found a bit too sweet.

Clearly not for me, because I think even crabmeat is too sugary, guests could also order the hotel’s signature Pink Palace pancakes. They were — wait for it — pink, and included such cloying ingredients as guava-raspberry shortcake and coconut-kaffir créme.

Guests could grab quick-service pastry items and coffee from the eponymous bakery on the black-and-white-tiled lanai (I loved my trio of banana-bread muffins, not least because they were free).

The resort’s beachfront Mai Tai Bar offered a dizzying number of takes on the cocktail, including the 1953 iteration with fresh pineapple juice and orange juice, and rums from neighboring Maui.

No matter which mai tai you tried, they all came garnished with fruit and paper umbrellas. Splurge to have your cocktail served Instagram-ready in a Maui Gold pineapple.

The Royal Hawaiian also offered room service 24 hours every day, and on Monday and Thursday evenings, the hotel hosted a traditional aha’aina, or feast.

The Royal Hawaiian hugged a single, circular swimming pool flanked by a flock of pink cabanas and chaise lounges shaded by pink umbrellas.

There was also one small hot tub. Guests at the Royal Hawaiian can also visit the Helumoa Playground, a pool area shared with the Sheraton Waikiki that has a waterslide and fountain area for kids.

The Royal Hawaiian’s main attraction was its direct Waikiki Beach access (here, too, you could find shade beneath a pink umbrella), and the hotel offered a parade of activities included in the daily resort fee.

The Royal Hawaiian was home to the Abhasa Spa and a small gym, though guests also had access to the superior fitness center at the neighboring Sheraton Waikiki.

The location of the fitness center and the spa was itself a turnoff here, as guests had to descend into a part of the hotel partially reserved for employees. It felt more like a local museum than a resort wing.

There were also a number of upscale specialty shops. If you were a fan of the bath products, for example, you could shop the Hawaiian flora-focused collection at Malie Organics. If you forgot your swimsuit or glam resort wear, there were plenty of options here, too (Rebecca Beach, Tori Richard, Waikiki Beachbody).

Did I mention that The Royal Hawaiian is very pink? This might sound like a silly detail to fixate on, and I'm sure it will be charming for some (maybe most) guests. However, instead of feeling soothed and transported to a more glamorous time on Waikiki Beach, I felt bombarded by the omnipresence of the pink.

While I saw plenty of families roaming the grounds, the property had a look-don’t-touch museum vibe, so I wouldn’t necessarily recommend this hotel for parents with young children in tow.

Travelers with a strong interest in local history, however, will find plenty to love about the immaculately maintained, legendary property. The Royal Hawaiian also delivered excellent service (I can't remember the last time I had a proper turndown service with pillow chocolates). And for travelers with status, it’s certainly a place you’ll feel pampered.