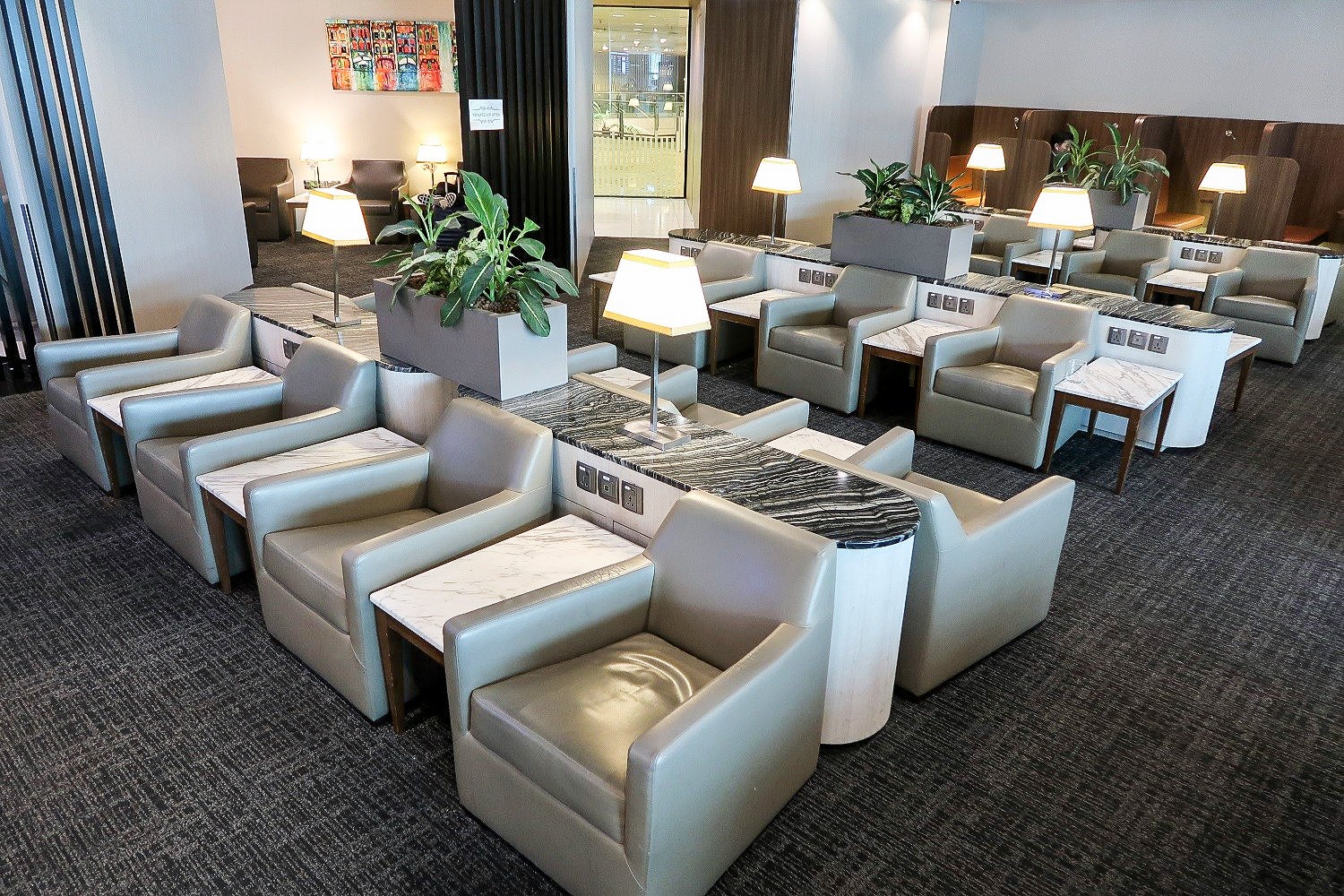 The SATS Premier Lounge in Singapore Changi Airport's Terminal 2 won the Priority Pass Lounge of the Year award for Asia Pacific in 2017. This was a notable feat, especially considering how many Priority Pass lounges there are in the Asia Pacific region. I was able to check out the lounge before a recent flight on budget carrier Scoot. Here's my take on this award-winning lounge.

To get to the SATS Premier Lounge in Terminal 2, turn left after passing through departure immigration. Then take the first escalator behind the information counter leading to the airline lounges and you'll see SATS-branded lighting on the outside of the lounge.

This lounge is open 24 hours a day. For my visit, I used the Priority Pass that I received as a benefit of my Citi Prestige Card to gain access. While I was booking y Scoot flight, I was given the opportunity to purchase lounge access to this very lounge for 39 Singapore dollars (about $30) -- after my visit I can say it's not a bad deal if you didn't have a Priority Pass.

The lounge was one large room with two distinct sections. After walking past the check-in desk, I entered the first section with four aisles of seating. Each aisle was divided by a counter topped with lamps and plants.

Seats were separated by faux-marble tables. Above each table were two universal power outlets and two USB outlets. So, although there were a lot of seats in the lounge, it didn't feel too crowded and there was ample power.

Eight cubicles with bench seating and tablets were located along one wall of the lounge.

The second section of the lounge was mainly devoted to dining. There was a buffet along the wall and on two islands on the side of the room away from the windows.

There were two-person tables and long high-top tables in the dining room. These tables were mainly for eating, as neither type of seating had power outlets.

The lounge was well-decorated with relaxing music, artwork and flowers. Unfortunately, a few other passengers held loud phone conversations in the lounge, and these conversations carried throughout the lounge.

Two electric massage chairs were in a nook just off the main sitting section of the lounge. There was a relaxing fountain running in the room as well as antibacterial gel and towels if you wanted to clean the chair before using it.

In the women's restroom were two showers, two toilets and a makeup counter with hair dryers. The showers were practical and looked relatively clean, but this wasn't a lounge where the showers were cleaned or reset between uses.

There were eight bench-seat cubicles along one side of the lounge. Each cubicle had a large tablet connected to the internet and could be used for surfing the web. These cubicles were ideal for working, and were the only table spaces with power outlets — as long as you could figure out how to turn off the tablet screen. I had mixed luck in doing so when I tried a few different cubicles.

Magazines and newspapers were available on the divider between the two sections of the lounge.

In the sitting area part of the lounge, one large flat-screen TV showed CNN International and another showed a departures board.

Wi-Fi was available through the SATS Premier Lounge network. This network was unsecured and tested at 4.85 Mbps download and 4.71 Mbps upload during my visit.

The highlight of this lounge was its food. And the highlight of the food was the make-your-own laksa bar. There were covered bowls of noodles, a hard-boiled egg, bean sprouts and dried tofu.

To prepare your laksa, put everything from the bowl into a metal strainer and put the metal strainer into a hot pot of water for about a minute. Then put the food back into the bowl and add coconut curry broth and toppings to taste.

The laksa noodles didn't disappoint. Despite how the dish looked the broth was more sweet than spicy.

There were also five well-labeled hot plates of food and a vat of soup. The options during my visit included:

I tried the potato gnocchi, leaf chicken and potato soup. All of these were flavorful, well-seasoned and didn't taste like they'd been sitting out for long. The wrapped chicken was difficult to unwrap but surprisingly tender.

One cold buffet had watermelon and a corn and bean mixture.

Another cold buffet had deli meats and cheeses as well as two types of prepared sandwiches.

There were two coffee machines as well as hot water for tea.

There was a refrigerator with two types of beer, Tiger and Asahi, cold beer glasses and various canned drinks including sodas and fruit juices. Next to the refrigerator was a soda machine with six different types of soda.

Across from the refrigerator was a self-serve bar with wines and liquors. The selection wasn't great, but there were a few types of wine as well as vodka, scotch and gin.

An attendant came through the lounge about every 30 minutes to remove dishes, cups and trash. This meant that items were generally removed, but that you might need to move used items to another seat before sitting down.

This lounge won Priority Pass's Lounge of the Year award for Asia Pacific in 2017. It serves good-quality food in a comfortable environment. There are plenty of power outlets in the lounge and there are multiple showers. This being said, it's more of a practical lounge than a luxurious one. The showers are more like what you'd find at a gym than at a business-class lounge, there's not much private space and there's no space to sleep. But, for a Priority Pass lounge, it's a good place to get some work done or have a meal before your flight. I'd confidently say it's one of Asia Pacific's top Priority Pass lounges, but it might be a stretch to say it's the absolute best.

Our points-obsessed staff uses a plethora of credit cards on a daily basis. If anyone on our team wouldn’t recommend it to a friend or a family member, we wouldn’t recommend it on The Points Guy either. Our opinions are our own, and have not been reviewed, approved, or endorsed by our advertising partners.
See all best card offers
Related stories
News
Last chance: Earn up to 100,000 miles with these big United bonuses
Deals
Round-trip fares from US cities to Edinburgh from $500
Guide
The 10 best Priority Pass lounges around the world
Deals
Fly in business class to London for less than $2,600