Articles
Ben Smithson is a senior writer for TPG UK. Originally from Australia, he is the primary points and miles writer for the U.K. site.
Follow
July 09, 2021
•
10 min read 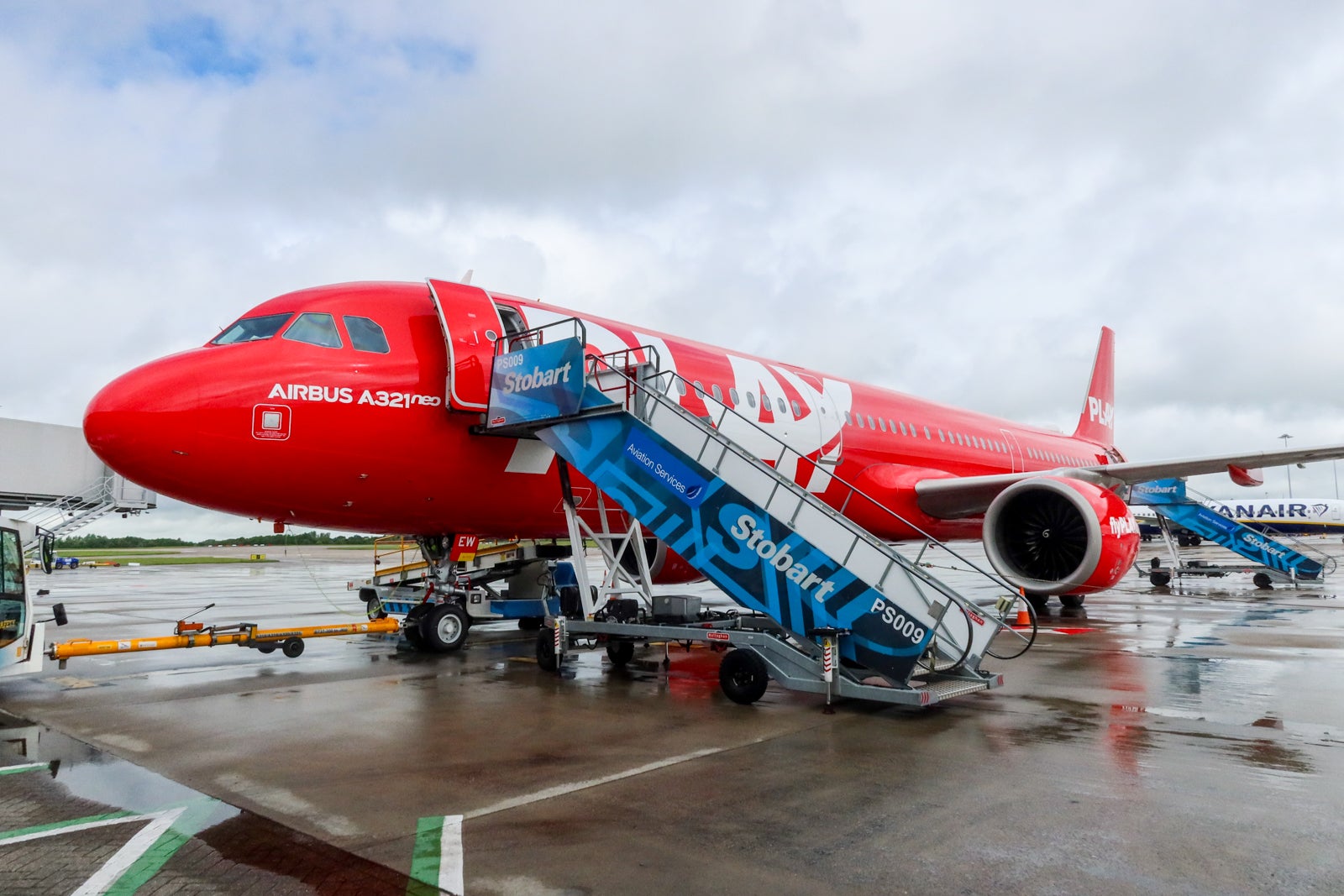 2021 is a strange time to launch a new international airline.

Some countries have closed their borders to foreign tourists completely, while others have complex and constantly changing testing, quarantine and vaccination requirements. Planes still sit in storage in deserts across the globe after more than 12 months, patiently awaiting the return of global travel.

You might recall Wow Air tried flying between North America and Europe via Iceland a few years ago with a low-cost model. Even pre-pandemic, when tourists flooded into Iceland without a COVID-19 test or indeed a care in the world, this failed badly.

Related: Wow Air collapse: Should you worry about who is next?

Nonetheless, some of the management team from the original Wow Air have decided to try again, with a brand-new airline they've named Play. The airline will initially operate between Iceland and Europe, with plans to fly to the United States next year and connect passengers between the two continents.

Play's first route is from their base in Keflavik Airport (KEF) to London's Stansted Airport (STN), so I decided to be a good sport and see if they could survive where WOW failed, especially during such uncertain travel conditions.

Related: 9 reasons you should visit Iceland this summer

It turned out to be an excellent low-cost experience. Here are seven things I loved about flying Play to Iceland.

I booked a seat via Play's website on just their fourth passenger flight for the bargain price of 71 euros ($84) one-way only a few weeks in advance. Considering it is the peak summer travel season, that's a great price for a direct flight from London to Iceland.

The flight was less than half the price of full-service carriers like British Airways and Icelandair, who also fly between the two cities.

Note that being a low-cost carrier, Play charges extra for everything, including full-sized carry-on baggage, which I added as a bundle together with priority boarding for an extra 24 euros ($28.50).

I used my U.K. British Airways Amex to pay for the flight which earns 1.5 Avios per £1 spent. Not as good a return as American cardholders get, but I’ll take it.

If you don't need to take full-sized carry-on baggage on board, or mind where you sit, you can certainly keep the costs super low this way.

A downside of low-cost carriers can be long lines, as they keep fares low by keeping staffing numbers similarly low.

New airlines can also have bugs with their technology as they roll out operations to paying customers for the first time. I was pleased to see Play's website work perfectly, both for purchasing a ticket and then checking in online.

I was able to produce a mobile boarding pass which allowed me to skip any check-in lines completely. It was free to use to boot.

3. A livery you won't forget

The bright red livery on the Airbus A321neo flying me to Iceland was unmistakable.

As I walked to the gate and caught glimpses of the plane through the terminal windows, I overheard passengers flying other airlines talking about the shiny plane. They commented how they hadn't heard of Play before and were curious where the plane was flying to.

This livery will be a great marketing opportunity for Play.

This was easily my favorite part of the Play experience.

The Airbus A321neo had a giant single cabin of 192 economy seats, with 34 rows of economy seats laid out in a 3-3 configuration.

As soon as I sat down I gasped at the incredible legroom to be found in each and every seat — a massive 34 inches.

I would be very pleased with this sort of legroom in economy on the likes of premium airlines such as Qatar Airways or Singapore Airlines, but remember I was flying a low-cost carrier, on a short-haul flight.

I am 6 feet tall and my knees could not touch the back of the seat in front of me even if I tried.

The seat had a good recline, and a headrest that could be adjusted both up and down and the sides folded in.

Widthwise the seats were a standard 20 inches.

I was pleased to see reading lights and more importantly, individual air nozzles above each seat.

The seat was very comfortable for the 2.5-hour flight to Iceland.

5. Plenty of space to stretch out

Being a new airline, the flight was nowhere close to full — I would estimate only around 25% of the seats were taken as boarding completed.

Many passengers took the opportunity to spread out after takeoff, moving to one of the many empty rows on the aircraft to make themselves more comfortable, and the crew had no issues with them doing so.

If you are flying Play anytime soon, you're likely to find plenty of space to stretch out.

At the gate, a pair of extremely friendly and upbeat gate agents had checked my COVID-19 documents for entry to Iceland, and warmly welcomed me to board this new airline.

While there was a stand for measuring carry-on baggage at the gate, the agents didn't check or tag anyone's baggage and seemed extremely relaxed about the new airline's baggage rules.

On board, all of the crew seemed happy and relaxed to be working for a brand-new airline and had an easy flight with such an empty plane. I thought their unisex uniforms suited the brand perfectly — comfortable and practical yet still Play-ful.

Even their sneakers featured the Play branding.

There were a few small delays during the service, such as triple-checking the cost of menu items before swiping credit cards for payment, which was to be expected on one of the airline's first few flights.

These moments were all met with a smile and a friendly apology for the delay.

Related: Traveling to Iceland during the coronavirus pandemic — the complete guide

As Play is a low-cost carrier, all onboard food and drink must be purchased. The menu features a good range of options at prices that while not cheap, were roughly in line with other European low-cost carriers.

I love when airlines embrace snacks and drinks from their home country, so I ordered an Icelandic beer and Icelandic chocolate, as well as a vegan wrap (you know, to balance out the beer and chocolate) for a total of 20 euros ($24).

The beer wasn't particularly cold but the vegan wrap was super fresh, light and tasty — it tasted like it had come out of a cafe kitchen moments earlier and I would happily have this on another flight, or on the ground.

This was an excellent flight. I have certainly never been on a low-cost airline with 34 inches of pitch in every single seat — I don't know why they haven't reconfigured the aircraft they acquired from Mexico's Interjet to reduce pitch and add extra seats. Perhaps they recognize it's likely to be a long time before they will need more than 192 seats on one of their aircraft and are giving their passengers maximum comfort in the meantime.

To find 34 inches of pitch in regular economy seats on a full-service airline would be impressive, but for passengers on a low-cost airline it's downright luxurious.

Crew, both on the ground and in the air, were really welcoming, friendly and happy to be there. There were no major operational or service issues that can plague brand-new airlines as staff get up to speed with new processes and systems. The whole flight ran extremely smoothly.

As much as I loved the flight, I still can't quite work out the Play business model — their predecessor WOW Air failed in pre-pandemic conditions with much more densely packed aircraft. Though an Icelandic-based airline has an attractive geographical advantage, transporting passengers between Europe and North America with a stopover in a country with breathtaking scenery, flag carrier Icelandair already does that.

The additional challenge Play will experience, which WOW did not, is that on the European side, ultra-low-cost Hungarian giant Wizz Air already serves Keflavik Airport from 10 year-round destinations in Europe with new destinations being added all the time. Wizz has weathered the pandemic well due to their incredibly low operating costs and huge cash reserves and has the low-cost model down to a fine art — they wouldn't dream of giving passengers 34 inches of legroom.

While Play may have an easier time entering the North American market next year, they may have a tough time competing in the already crowded Iceland-to-Europe market.

Regardless of their strategy or profitability, Play was an excellent low-cost experience and a comfortable and affordable way to travel to the spectacular country of Iceland.

Featured image by (Photo by Ben Smithson/The Points Guy)
Editorial disclaimer: Opinions expressed here are the author’s alone, not those of any bank, credit card issuer, airline or hotel chain, and have not been reviewed, approved or otherwise endorsed by any of these entities.