Convenient, but Not Much Else: Lufthansa's A330 in Economy From Austin to Frankfurt

Articles
Katherine Fan is a former senior travel features reporter at The Points Guy who covered everything from personal finance to travel and aviation.
Aug. 18, 2019
•
11 min read 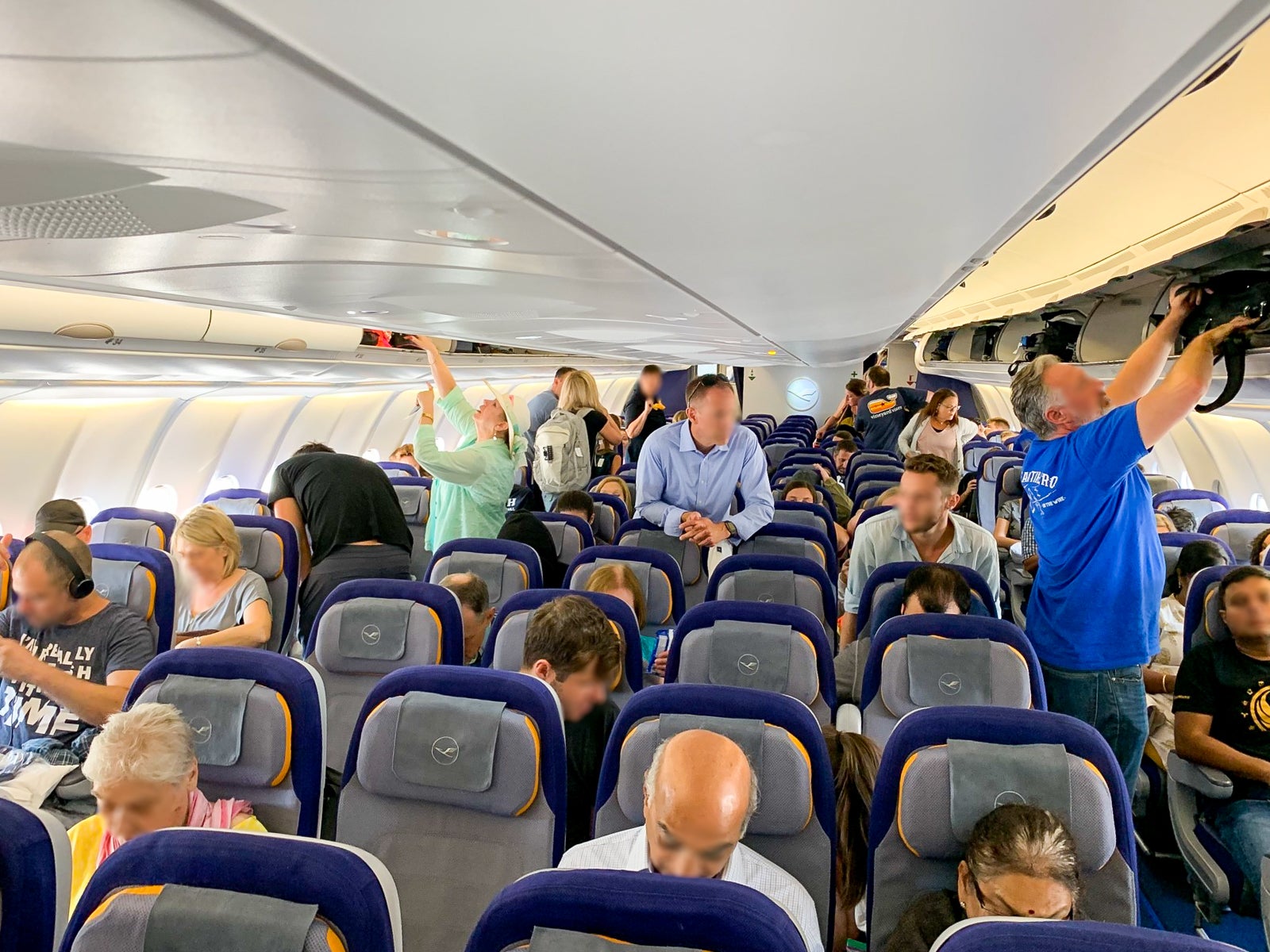 Convenient, but Not Much Else: Lufthansa's A330 in Economy From Austin to Frankfurt
This post contains references to products from one or more of our advertisers. We may receive compensation when you click on links to those products. Terms apply to the offers listed on this page. For an explanation of our Advertising Policy, visit this page.

Lufthansa launched a new nonstop route between Austin and its Frankfurt hub in May of this year. Flight LH469 operates on the Airbus A330-300 five times a week.

This is the German carrier's third Texas destination after Dallas-Fort Worth (DFW) and Houston (IAH). The flight departs the Texas capital, Austin (AUS), five times a week on Mondays, Wednesdays, Fridays, Saturdays and Sundays. The 4pm departure time is extremely convenient: it helps minimize the impact of rush-hour traffic, and the 9am arrival time helps travelers get a jumpstart on the new day and make onward connections to other cities in Lufthansa's vast network.

I booked this flight using 30,000 United MileagePlus points — the first segment of a three-flight itinerary to Santorini, Greece (JTR), to attend the wedding of two friends. According to TPG's current valuations, the 30,000 United miles I used are worth about $390. Compared to the cash price of $2,550, I got an excellent value for my points.

Keep in mind, too, that it's easy to acquire United miles, since the airline is a 1:1 transfer partner of the Chase Ultimate Rewards program. In fact, you can top off your account quite easily just for signing up for the Chase Sapphire Preferred card, which is currently offering a sign-up bonus of 60,000 points after spending $4,000 within the first three months.

Austin-Bergstrom Airport is my home airport, and up until now, I've always had to fly first to New York for Europe- or Africa-bound flights, or to California for Asia-bound trips. Needless to say, I was enthused about getting the longest leg of my travels out of the way right from the get-go. I was also excited about the fact that AUS is still a fairly small airport right now, with just 34 gates, so I knew I would be able to check in very quickly.

I wasn't wrong: It only took me six minutes to go from the entrance, check two bags and get through the TSA PreCheck line at security. The Lufthansa check-in counters are toward the right of the terminal — the first drop-off point when coming in to the departures terminal by car.

The staff were really helpful and got my two bags checked in no time. The Lufthansa check-in counters are really close to Security Checkpoint 3, but that's the one checkpoint out of Austin's three that does not offer TSA PreCheck. So if minimal check-in hassle is important to you, I suggest making your way left from the check-in counters to the central checkpoint, where you'll have access to both CLEAR and TSA PreCheck lanes.

As the agent handed back my boarding pass, she reminded me that I had access to the United lounge in the airport because of my Star Alliance Gold status. I normally have access to begin with because of my United Club membership, courtesy of the United Club credit card, but it was a nice reminder that the Star Alliance partnership between United and Lufthansa comes with more perks than just codeshare flights. As a result of the Star Alliance Gold status, I was also able to access the Air Canada Maple Leaf Lounge upon arrival in Frankfurt, as well as the small Aegean Airlines lounge in Thessaloniki, Greece (SKG). However, since lounge access isn't included in Lufthansa economy tickets, that did not factor into my rating of this section.

About 10 minutes before boarding time, I made my way to Gate 3 to await my flight. We ended up queuing up for boarding pretty late — just 15 minutes before departure time — which resulted in us taking off at 4:28pm, 23 minutes after scheduled departure time. We all boarded from the very front of the plane, right by Row 1, so I walked past every cabin class on the plane on my way to the back.

Lufthansa operates a three-class Airbus A330-300 between Austin and Frankfurt.

Lufthansa is known for flying various seat configurations on each of its long-haul airplanes except one, the giant Airbus A380, which comes in one layout only. This version of the Airbus A330 has 255 seats. There are 42 lie-flat seats in business class in a 2-2-2 configuration, 28 recliner seats in premium economy in a 2-3-2 configuration and 185 standard seats in a 2-4-2 configuration. This meant that nobody in coach class had to crawl over more than one person to access the aisle.

According to FlightRadar24, my plane was 7 years old. My seat was reasonably comfortable — the foam padding wasn't worn thin, nor was the wear and tear excessive. My blanket was edged with contrast piping, and my pillow was covered in a real fabric pillowcase.

The headrest had a little removable cover on it. I hoped this meant that it also gets cleaned periodically, but I'm not going to make any assumptions.

The mesh magazine holder on the seatback wasn't very big, and my pen kept falling out of the pocket. But I always appreciate trays that feature separate drink holders that don't require me to drop down the entire table. The ones on this plane were sturdy, although the plastic cups themselves were on the flimsier side.

The tray table felt small and a little bit flimsy, at just over 13 inches by 7.5 inches with approximately 3 inches of extension available.

The lavatories were clustered toward the center of the plane, toward the front of the economy section. They were adequate and utterly unworthy of attention in any other respect.

Let's get right to it: The Wi-Fi was abysmal. This cost me $20, mind you, and was supposed to grant me 500 MB of email and surfing access. I managed to get Gmail to load twice and couldn't get Outlook or Slack to work at all.

The screen was on the smaller side, at approximately 8 inches diagonally, but the programming was generous. There were close to 200 movies and 200 TV shows available, including current blockbusters and a variety of international options. I was particularly impressed with the TV show selections, which featured a diverse selection from "Ariana in Concert" to "Meow Wolf: The Origin Story" to the ubiquitous "Friends" and so on.

My screen was finicky and quit working halfway through the flight, hovering on a frozen screen. Since the seat next to me was empty, I was able to test the screen on that seat and confirm that the error was isolated to my seat only. Goodie!

Audio quality was poor and required two-prong headphones, which were distributed by flight attendants midflight. (I was able to use my single-prong headset in the headphone socket but only had audio in one ear at a time.) The headphones themselves felt very cheap and came with foam covers I had to put on myself. As a result, I ended up not really bothering with inflight audio for the entirety of the flight, sticking to Spotify playlists that I had previously downloaded to my phone.

The power outlet worked fine, but as with many other sockets, wasn't quite strong or tight enough to hold my laptop's power brick in place as it charged. I had to reinsert the charger more than half a dozen times throughout the flight. But, hey, power is better than no power, and it worked just fine.

Soft drinks weren't offered on board until about an hour into the flight.

We were served two meals during this flight: dinner 90 minutes after takeoff from Austin and breakfast about 75 minutes before we landed. Flight attendants came through with heated disposable towelettes before wheeling the meal carts down the aisles.

I was pleasantly surprised to enjoy my dinner entree. I had the mushroom chicken and rice with carrots, and it was flavorful in a way that only decadent quantities of butter can produce. It wasn't the healthiest meal, but it was quite edible. I'm not a big bread or dessert person, but both the roll and the brownie tasted good. My salad was meh.

Also, I thought it was noteworthy that dinner was served with metal cutlery — a nice touch for economy.

The drink cart came a few minutes behind the meal cart and included several liquors in addition to the standard red and white wine and beer. There was vodka, whiskey, gin and one other spirit I couldn't spot from my vantage point. Cleanup service took a while, and lights were turned off soon after the meal service concluded about three hours into the flight.

My happy feelings about dinner weren't matched for breakfast. The root veggies were fine, but the scrambled eggs were unpalatable. I did enjoy my fruit, both for the variety as well as the ripeness.

Flight attendants only came down the aisle to offer water once between meals, and I found myself thirsty more than once. I rang for assistance once and walked to the back galley once. Both times, I was helped after a minute or two, but there never seemed to be any flight crew around.

All in all, I'm grateful for a quick way to get to Europe directly from my home airport, and finding saver award availability during peak summer months was a great boon for my wallet.

That being said, "It was free" was one of the better statements I would make about this flight. The hard product is on the dated side, I wasn't able to get any real work done, and the level of service wasn't quite where I would want it to be had I paid $2,500 — or even half of that — for a revenue ticket.

All photos by the author for The Points Guy.

Featured image by (Photo by Katherine Fan / The Points Guy)
Editorial disclaimer: Opinions expressed here are the author’s alone, not those of any bank, credit card issuer, airline or hotel chain, and have not been reviewed, approved or otherwise endorsed by any of these entities.