Down-to-Earth Luxury: A Review of the Loews Chicago Hotel

Articles
Katie Genter is a location independent digital nomad who has traveled full time since June 2017. Her focus at TPG is points, miles, loyalty and credit cards.
Follow
May 07, 2019
•
14 min read 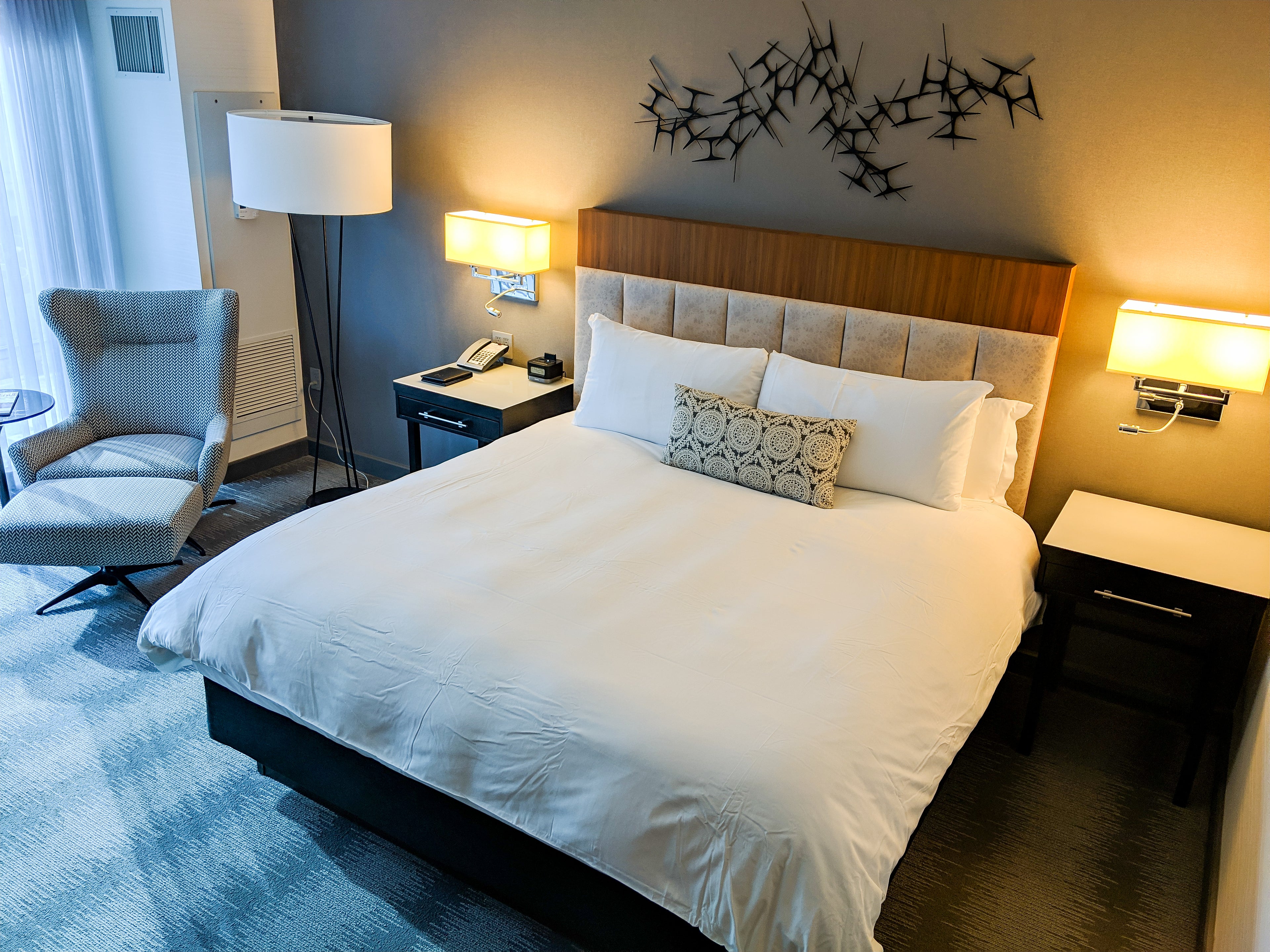 Loews is an independently owned family hotel company with just 27 properties in locations like Miami Beach, Tucson, Arizona, New York City, the one I'm reviewing today in Chicago and more. But the brand is well-known for its hospitality and service. The Loews Chicago Hotel is an American Express Fine Hotels & Resorts property, and I was able to snag a great rate through the program for a recent one-night stay in the Windy City.

I made my booking back in December 2018 once my husband, JT, and I decided to spend a night in Chicago after taking an Amtrak train from Portland, Oregon. I booked a superior room for $129 plus taxes, which came to $153 total, through Amex Fine Hotels & Resorts using The Platinum Card® from American Express.

Since I booked through Amex Fine Hotels & Resorts, I was eligible for all of the program's benefits. I knew I'd use the guaranteed 4pm late checkout, as well as daily breakfast for two and the $100 food-and-beverage credit provided as the property's "unique amenity." Since Loews Chicago provided the daily breakfast benefit as two $30 breakfast credits, this meant I got $160 of food and beverage in credit during my stay -- more than I paid for my stay.

The Loews Chicago Hotel is in the heart of Chicago, two blocks away from the Chicago Riverwalk and the Magnificent Mile. The property seems popular with both tourist and business travelers, based on the other guests we noticed at the hotel. We took a $6 Uber from Chicago Union Station, but there was also ample public transport around the hotel, and Big Bus Chicago had a stop near the hotel's entrance.

We arrived at the hotel around 4:15pm and waited less than a minute for a check-in agent to become available as multiple other parties were checking in. The check-in agent greeted us and then performed the most efficient yet informative check-in I've experienced.

He quickly saw that we'd booked through Amex FHR and noted we'd been upgraded to a premium king room. My screenshots from booking show that this room type was $50 (plus tax) more than the one I booked. The entire check-in process took less than four minutes, even with the check-in agent reviewing the FHR benefits with us and telling us the amenities and restaurants available.

Shortly after check-in, I received a text message from the hotel welcoming me and saying I could text if I needed anything using Chat Your Service. I asked a question a few minutes later and received a response almost immediately.

I was assigned Room 905, near the end of the hallway. The hallways were well-lit and always smelled good, although I couldn't quite place the scent.

Upon entering the room, I immediately noticed some practical touches, such as the table and large mirror next to the door. The table was a great spot to drop my keys or purse when entering the room, and the mirror was so large that it really came in handy for getting ready in the morning.

Walking forward was the bedroom. The king bed had nightstands and lights on each side. The bed was comfortable and featured four full-size pillows.

Next to the bed was a large chair with a footstool. JT spent his time working comfortably from this chair. There was a small, round table on one side of the chair, and a large lamp on the other side of the chair.

Large floor-to-ceiling windows covered the wall between the lounge chair and a desk. One portion of the window could open slightly. The view from our room wasn't particularly amazing, but we could see various nearby parks and buildings.

The desk was large enough for two to sit and work, and this is one of the few hotels I've stayed at that provided two chairs for working at the desk. Next to the desk was a panel with four power outlets and four USB outlets. There was a lamp on the desk, and under the desk was a compartment with glasses and an ice bucket.

Next to the desk was a three-drawer dresser with a 48.5-inch flat-screen TV.

Besides the three drawers, the dresser also included a minibar cabinet. The minibar contained both cold and warm sections, as well as a price list. On top of the dresser was a Keurig coffee machine.

Walking back toward the room's entrance, there was a closet on the left. Inside the closet was a vertical safe, plenty of hangers, an iron and ironing board, a luggage rack and extra linens. A note in the closet said that you could get items pressed within two hours for $5 per item.

The bathroom was across from the closet and the table near the entrance. The sink was surrounded by a large vanity.

Soap, lotion, shower caps, cotton balls and cotton tips were provided on a tray on the counter.

Towels were on the lower shelf of a small table across from the toilet.

The shower cabin was large, and the shower head provided consistent water pressure and temperature.

Shampoo, conditioner and soap were on a shelf in the shower.

We ate dinner and breakfast on site at the ETA Restaurant and Bar. The restaurant was just off the hotel lobby and featured a casual dining atmosphere. The restaurant's menu was available online, but here's the dinner menu from my March stay.

JT ordered the ETA burger with fries ($17), I ordered the Loch Duart salmon ($26), and we ordered a truffle mac ($8) to split. The truffle mac was disappointing, as it was just shell pasta covered in cheese, but the burger was solid. The fries that came with the burger were crisp and well-seasoned. The salmon was fresh, and the potatoes and broccoli that came with the salmon were well-prepared.

The ETA Restaurant served breakfast until 11am during the weekdays and 11:30am on the weekends, so we ate a late breakfast in the restaurant.

I ordered an omelet with broccoli, bacon and cheddar cheese ($17). The omelet was stuffed with these ingredients and perfectly cooked. JT ordered the eggs Benedict with salmon ($17), and said that although it wasn't the best he'd ever had, it was a delicious meal. Both of our meals came with delicious breakfast potatoes. Overall, we were pleased by the size of the breakfast entrees served by ETA.

The Lobby Lounge served a selection of snacks, beer, wine and mixed drinks in the hotel lobby. We finished off our food-and-beverage credit here before checking out with two Blue Moon beers ($11 each). There was bar seating as well as high-top tables.

There was also a Starbucks on site, as well as a rooftop patio called Streeterville Social and a third-floor terrace that were only open seasonally.

The lobby in the Loews Chicago was large and inviting. Every time we walked through the lobby, there were people sitting at tables working, chatting at couches near the see-through fireplace or drinking at the lobby bar. The lobby was always active without ever being too loud. A concierge desk was next to the fireplace and was staffed throughout the day.

There was a gym, pool and spa on the third floor. The gym was open 24/7 and was one of the best-equipped hotel gyms I'd seen. There were various weight machines, a Smith machine, free weights, four treadmills, three ellipticals, one exercise bike, two Peloton bikes -- with free access to live and on-demand video classes -- and various other workout items like exercise balls, stretching devices and kettle weights.

In the corner of the gym was a table with water, apples and ear buds. There was also a refrigerator on the other side of the room with cold towels and water.

There was also a 20-meter lap pool that ranged in depth from 3 to 4 feet. There were two swimming lanes, but the pool was crowded with children playing when I visited midday. There were chairs along one side of the pool.

In the hallway outside the pool, there were bathrooms that were shared among the spa clients, gym users and pool users. The women's bathroom had self-serve lockers, two toilet stalls, one shower stall and all the amenities you'd need for showering including towels, shampoo, conditioner, soap, shaving cream, razors and hair dryers.

Complimentary Wi-Fi was offered to all guests, while FHR guests got complimentary access to the Premium Plus Wi-Fi using a special code.

Although the Wi-Fi wasn't fiery at 15 ms ping, 9.52 Mbps download and 9.49 Mbps upload, it was good enough for streaming videos and working.

I stayed at the Loews Chicago Hotel because $153 is a great price for a luxury hotel, especially if you book through American Express Fine Hotels & Resorts to get the benefits. But I was surprised to find excellent customer service, slick property design and a luxurious yet approachable feel throughout the hotel.

The small touches take this hotel from good to great -- things like multiple desk chairs in our room, friendly staff who greet you in the hallways, cold towels in the gym, responsive texts from the concierge and staff taking the effort to reset chairs in the lobby during a slow time -- and really make a difference in customer experience.

Featured image by Our Premium King room at the Loews Chicago was comfortable and very livable.
Editorial disclaimer: Opinions expressed here are the author’s alone, not those of any bank, credit card issuer, airline or hotel chain, and have not been reviewed, approved or otherwise endorsed by any of these entities.