Articles
Nicky Kelvin is the director of content and face of TPG UK, and is also an award-winning photographer. Before joining TPG UK, he was a record label lawyer and avid traveler sharing points wisdom as the "Miles Mogul."
Follow
June 20, 2019
•
13 min read 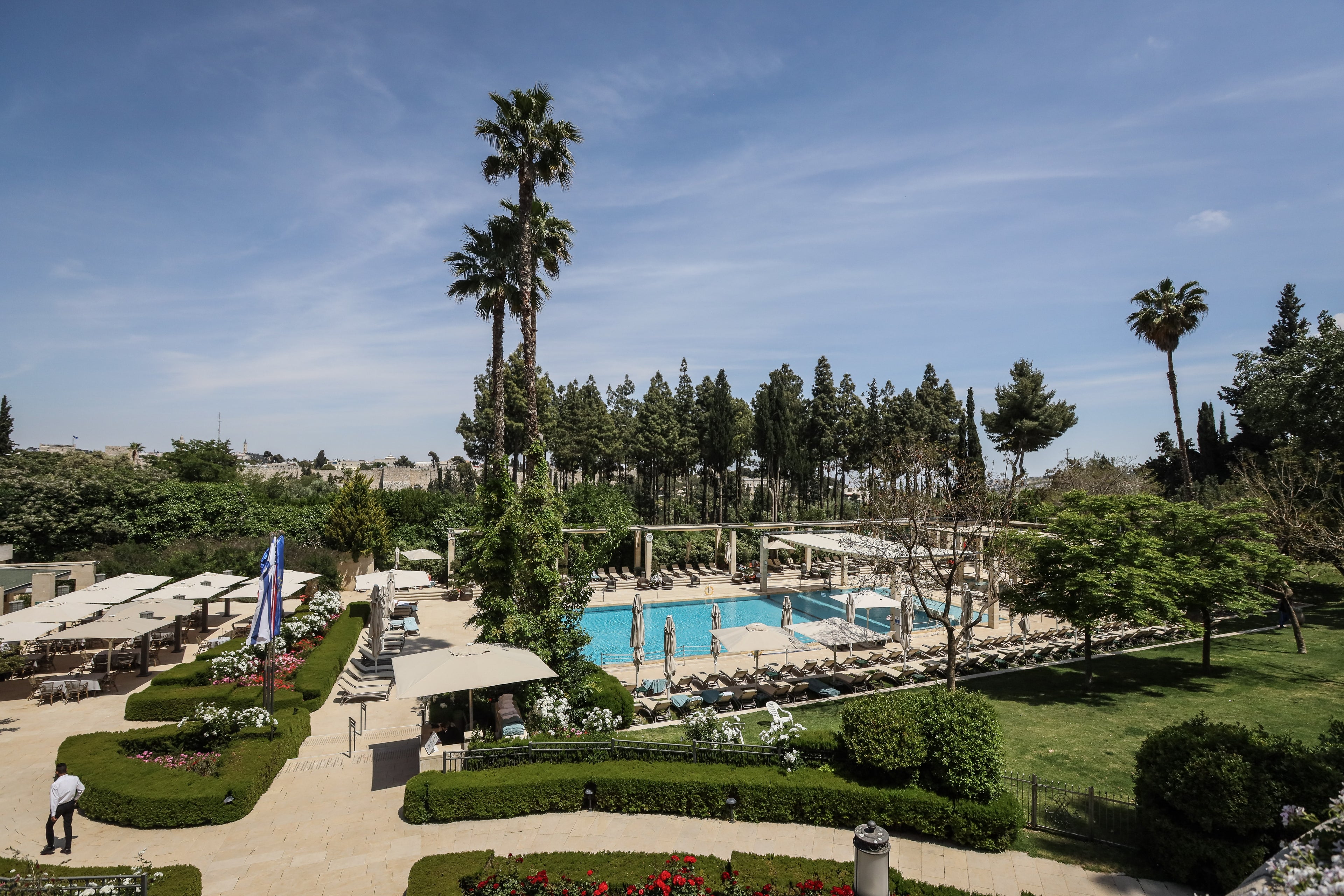 The King David Jerusalem Hotel is one of the most imposing and prestigious hotels in Jerusalem. Once you know the interesting history of the building, you’ll understand why I found the idea of staying there so intriguing.

The landmark hotel dates back to 1929, built by a wealthy Egyptian banker to host royalty, important historical figures and elites of the world. It once housed three monarchs who were fleeing their own states: King Alfonso XIII of Spain in 1931, the Emperor Haile Selassie from Ethiopia in 1936 and King George II of Greece in 1942. From 1938 to 1948, the hotel also functioned as a British administrative and military headquarters when the region was under a British mandate.

After surviving a bombing in 1946 by an underground Zionist movement targeting the British authorities, the hotel was purchased by the Dan Hotel Chain in 1958. Since then, the property has hosted several famous guests, including Madonna, Richard Gere and even Prince William. And now, Nicky Kelvin! Read on to see how my three-day stay went.

This particular hotel is part of Dan Hotels, a collection of properties throughout Israel and India. You can join the tiered e-Dan Club loyalty Program and book directly online, with benefits like an 8% discount on room rates from booking direct and discounts on extras like food, beverage and laundry.

But those who aren't frequent Israel visitors may benefit more from booking on Hotels.com. Booking using the Capital One Venture Rewards credit card and the Capital One VentureOne Rewards credit card will earn 10x miles on purchases made at Hotels.com Venture (ends Jan. 31, 2020). This basically gives you 10% back on hotels booked at Hotels.com, since Capital One points are worth 1 cent apiece when redeemed for a statement credit against travel purchases. Venture card holders will have to book and pay through a special URL, Hotels.com Venture, to receive the 10x miles.

Even if you aren't a cardholder (I'm based in the UK, so I'm not), you can still take advantage of the Hotels.com loyalty program, which gives you one night free after every 10 paid nights.

The hotel is across from the most beautiful YMCA I’d ever seen (yes, I briefly did the Village People's "YMCA" dance on my balcony). The walk to the Jaffa Gate in the Old City is just under 20 minutes, and there are plenty of restaurants, bars and shops within walking distance. It's a five-minute walk from the Waldorf Astoria, where TPG was staying.

Getting there from Tel Aviv’s Ben Gurion Airport (TLV) by car took well under one hour.

The lobby is dark and sultry, and I could feel the history in the walls. Beyond, I noticed the beautiful garden and terrace outside.

But the intriguing introduction to my stay was quickly quashed with a rather messy check-in experience. At first, they couldn’t find my reservation, which I’d made ages ago, even with my confirmation number. They finally were able to source it and told me they were giving me a small upgrade from a Jerusalem Standard room to a New City Deluxe room.

Staff also completely forgot about my bags, and I actually ended just taking them up myself after I had walked around getting acquainted with the property and snapping some photos. They were just sitting all alone in the lobby, sad, abandoned, not tagged, with no one around. A definite fail when it came to check-in, service and security.

I walked up to Room 105 via a large and regal marble staircase.

My first impression was that the room was rather old, but the style fit the hotel’s vibe. Although it wasn’t my typical aesthetic, I still liked it.

The bed was exceptionally comfortable, and the cool tapestry hanging behind it was a unique take on a headboard. The two bedside tables had unique brass lamps.

One side of the bed had three outlets, but I would have had to unplug the lamp on the other side of the bed to plug electronics into both sides. The TV was dated, and the furniture had some scuffs.

The details were nice, though. I was left snacks and a welcome note and told that everything in the minibar was complimentary, though it was just juices and sodas (no alcohol).

The room had an orchid, and there was a fresh gerbera daisy in the bathroom. I hugely enjoy real plants and flowers in a hotel room.

The room also had all of the regular amenities like robes, slippers and a safe. There was even an electrical adapter. The blackout shades were electric, which I always like having.

The balcony was a beautiful touch. Both sets of French doors opened up onto the outdoor space.

My views looked out over the main street, which was not hugely busy with traffic, and across to the Jerusalem YMCA.

The room definitely felt a bit '80s, though, especially the bathroom, which was definitely dated for such a nice hotel. The hair dryer was one of those boxes with a tube on the wall.

The red marble was a little tacky, and the amenities were signature King David.

The packaging should probably have been sent back to 1985 (which was when it was likely made). The smell wasn’t so bad, though it kinda reminded me of aftershave my dad wore in the 1980s.

The shower was quite short. While it was fine for me, with solid water pressure, it definitely wouldn’t pass the TPG shower test.

Each night, turndown service was provided, and chocolates were set out on my pillow.

Breakfast was included in my rate (with a small service charge added for room delivery) and it was quite the spread. Even though I ordered it to my room for Saturday morning, I got a pretty decent meal, although it didn’t include eggs (the hotel is kosher, so on Saturdays, nothing can be cooked because of Shabbat). The only real downside to the breakfast prepared on Shabbat was that no real coffee could be made, either, so I drank instant instead.

The other mornings, I went down to the buffet, which had excellent and varied options. The choices included things like fresh juice and fruit and a hot selection.

It was also possible to order off the menu.

One afternoon, I sat outside on the terrace with co-workers to order snacks like falafel, hummus and tuna tartare. The food was good, and we enjoyed delicious iced coffee, too.

Although there was a bar near the pool, it didn't do poolside service, but they did pack me up a chicken salad to take to my day bed.

The public areas of the hotel were really impressive. I felt like I was in a building where a lot of important events went down.

The King David really shines when it comes to beautiful outdoor space.

The terrace has expansive views that looked out over the old city, the tennis courts, the garden and the pool.

Peaceful and quiet, the pool area was huge, and I couldn’t imagine it ever being full. I don’t think people necessarily come to Jerusalem to lie by the pool, but it was so nice to spend a few hours out here working and having lunch one day.

The garden was truly a delight, filled with roses, petunias and different kinds of cacti and herbs such as lavender, giving me inspiration for my green fingers to get to work in my London garden!

I don’t play, but there was also a tennis court on the premises.

I normally would never wander through meeting rooms at a hotel (well, unless I was actually there for meetings), but the Oak Room and the Reading Room were historical and interesting to check out. It felt like I was at a museum, save for the setup of tables and chairs.

The Oriental Bar was empty when I popped in one afternoon. I could just imagine what it must have been like in its heyday, though. With its rich, velvety furniture and dim lighting, I imagined a lot of brandy sipping and cigar smoking must have happened there.

The gym was a little small, with a few treadmills and weight machines, but I did manage to get a solid workout in one morning.

Staff was friendly but very slow at check-in, as I previously described, and service at the restaurant was also a bit slow.

I would stay at the King David again, if anything, for the fabulous location and excellent outdoor amenities like the pool, terrace and restaurant. Having character and history added a little extra something to my trip, though I hope that the rooms (or at minimum the bathrooms) will get a refresh before my next stay.

Related stories
Bask Bank raises the mileage earning rate on its AAdvantage savings account — what you need to know
Targeted Premier 1K members eligible for bonus miles when checking in and checking a bag on the United app
Current airline elite status match and challenge options you should know about
Business-class deals are back: This month’s Flying Blue promo awards
Editorial disclaimer: Opinions expressed here are the author’s alone, not those of any bank, credit card issuer, airline or hotel chain, and have not been reviewed, approved or otherwise endorsed by any of these entities.