Articles
Lori Zaino is a writer for TPG and TPG UK covering travel, news, points and miles and more. She's been based in Madrid, Spain almost 15 years and is an expert in travel throughout destinations such as Europe, Southeast Asia and Africa.
Follow
July 14, 2018
•
11 min read 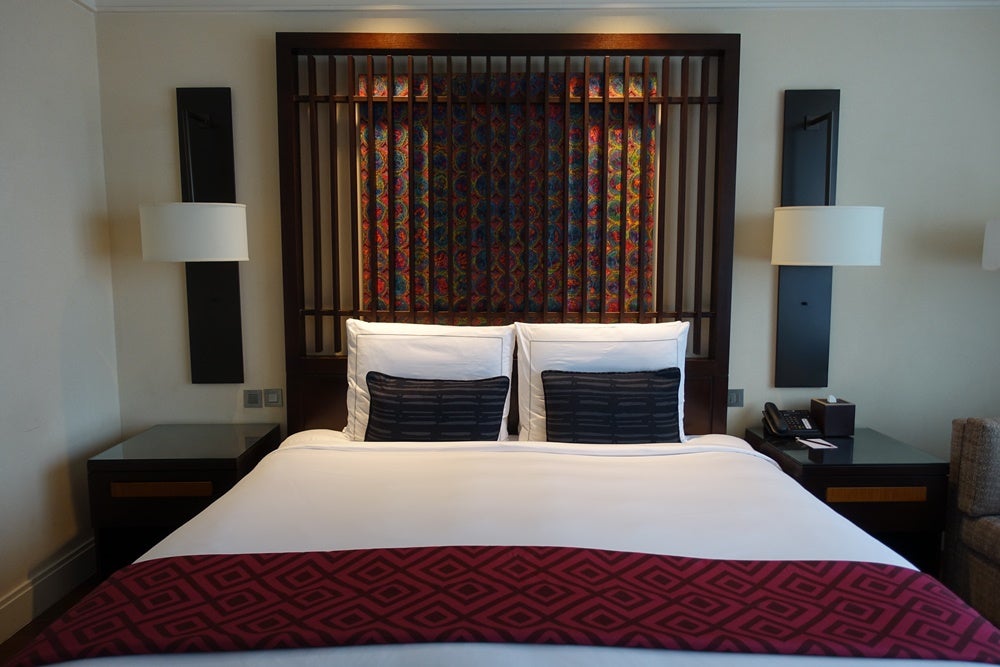 When I needed to visit Accra, Ghana, for a Peace Jam conference, I decided to stay at the Kempinski Hotel Gold Coast City Accra. While Accra may not be at the top of people's dream destination list, the Kempinski offers a stay at one of the more luxurious properties in the city.

I booked my superior room at the Kempinski Gold Coast City on Hotels.com Venture using my Capital One Venture Rewards Credit Card to earn 10x miles. (Offer ends Jan. 31, 2020.) My room cost $254 per night ($1,016 for four nights) — on the high end for Accra, but the city doesn't offer many luxury choices. (Just after I had booked my Kempinski stay back in April, the Accra Marriott opened. It's the brand's first hotel in West Africa, and I plan to stay there if I visit again.)

The gated property of the Kempinski was very private and set apart in the high-end Osu neighborhood, popular with expats. It wasn't really walkable to most places I wanted to go, so having access to a car or taxi was a necessity. The Centre for National Culture market, however, was a 10-minute walk from the hotel, and the National Theatre of Ghana, Ghana State House and Accra Sports Stadium were also relatively close by. Many restaurants and bars were a short drive away, and you could reach the airport in about 20 to 25 minutes by car, depending on traffic.

After a long, draining flight in economy on TAP Air Portugal from Madrid (MAD) via Lisbon (LIS), which culminated in me spending a ton of time dealing with missing baggage at the non-air-conditioned Kotoka International Airport (ACC) in Accra, I couldn't have been happier to walk into the Kempinski lobby, wowed by its chic velvet and leather furniture, high ceilings and overall glamorous vibe.

The lobby was spacious and airy, and I looked forward to getting the key to one of the hotel's 269 rooms. Before entering the property, though, I had to go through a metal detector and my purse was lightly searched (this happened every time I re-entered the hotel, and it's not uncommon for hotels in the region).

After just a few minutes at the check-in desk, I was assigned my room and proceeded to the elevators, passing a restaurant, bar and art gallery along the way.

The rooms at the Kempinski were contemporary and comfortable, decorated with muted colors and eclectic African art.

The king bed was large and inviting, and two bedside tables and lamps were on either side. The room had two giant closets and a dresser with drawers. I had plenty of space for all my items — I could have stayed for months. It seemed ironic that the one time a hotel offered enough storage space, my baggage was missing, meaning those large closets stayed empty.

A flat-screen TV and a large dresser with drawer storage, safe and minibar faced the bed, and the desk, sofa and chair were to the side.

The floor-to-ceiling windows provided expansive views of the pool and courtyard. There was also a balcony but no furniture on it, so I didn't spend any time out there.

A sign on the door warned me to never leave the door open, as insects would enter the room. The fear of malaria was real, and many people, doctors included, suggested I take malaria pills even for my short stay. In the past I've had adverse reactions to Malarone, so instead I wore insect repellent with DEET and covered up. (I didn't get a single mosquito bite during my four-night stay, for the record.) I didn't see a single insect inside my room or anywhere in the hotel, though I definitely wasn't sleeping with my balcony door open.

Daily water was provided, and I was happy to see a kettle with teabags and packs of instant coffee too. It wasn't a Nespresso machine, but it would do for my four-night stay.

The room included a robe and slippers, but I had to call down for an iron and ironing board, which were promptly brought up and stayed in my room until I checked out. I appreciated the fact I could adjust the A/C, as it was super hot outside.

The room had some signs of wear and tear, and I occasionally got a whiff of mildew upon entering, but the room was generally clean and comfortable.

The bathroom was large, with a big rainfall shower.

Although I'm only 5 feet 2 inches, I could tell that this definitely passed the TPG shower test.

The toilet and bidet were in a small separate room, and the lack of a bathtub didn't bother me.

Although there was only one sink, the counter had plenty of storage space for toiletries. The Kempinski toiletries provided (which I actually needed to use, as my luggage was missing) smelled wonderful — bergamot with organic aloe vera.

The hair dryer was also strong and powerful, which isn't always the case in hotels.

The main issue with the room I encountered was the lack of electrical outlets. I actually had to move the desk and unplug a lamp to plug my computer in. While I appreciated the large mirrors in the room (there were two, one full-length) neither was located close to an outlet, and since there wasn't an outlet in the bathroom, I couldn't curl my hair with a mirror. Thank goodness for the selfie option on my phone — a solid hack if you're without a mirror.

Breakfast was in the Papillon Restaurant and included in my rate. The buffet spread was expansive and included a juice bar, egg station, fresh fruit, cereals and lots of hot food.

I mostly stuck to the eggs, breads, hash browns and fruit, although one day they offered roti with curry, which was yummy. Fresh coconuts were also available at the breakfast buffet.

There was a variety of seating options, with several hidden nooks if you wanted to eat away from the rest.

I was able to sample the club sandwich from room service and the roast beef sandwich with caramelized onions at the pool lounge — the French fries served with the sandwiches were the best fries I've ever eaten in Africa. (Full disclosure: I haven't eaten that many French fries in Africa, but these were crisp on the outside, soft on the inside and overall just delicious!) There was also a restaurant off of the lobby that looked cute but was almost always empty.

A small art gallery was by the elevators. It housed a unique exhibit of photos, bras and women's underwear that covered the walls. It was a tempting opportunity for me, as my baggage and all my clothes were lost, but I refrained from any panty raids and instead snapped some pics and moved right along.

The pool was a highlight, as the African heat was strong. I didn't get to spend as much time as I would have liked there, but the vibe was great, especially around sunset. The lounge music was pumping, the crowd was trendy, and I enjoyed having cocktails and food in the cabanas. The water was the perfect temperature: refreshing but not absolutely freezing.

I didn't use the fitness center during my stay, but it was large and well-equipped. The hotel's website claims that the largest spa in Accra is coming soon to the hotel, too.

The staff was friendly and accommodating throughout my stay. When I needed safety pins to fix a dress I bought at the market, they immediately brought up several sewing kits. When I requested extra water, it was brought up right away. I was consistently greeted by staff near the elevators and in the hallways.

Another service I used was laundry. It wasn't cheap to rush about six items (almost $50), but since I had no other clothing, it was an absolute necessity. My clothes were washed, dried and back in my room in just under three hours.

Security was strict at the hotel — you needed a room key to access each floor. In order to get to coworkers' rooms on other floors, I had to first meet them on the ground floor and then we had to go up together. The metal detectors and bag searches were done every time I entered the hotel, which was a little annoying but made me feel safe.

One of our team members had a room with lounge access, and I was able to pop into the sixth-floor executive lounge to see the spread.

The space itself was large and comfortable, with plenty of seating and some hot food, alcoholic and nonalcoholic beverages, snacks and desserts. There were also a couple TVs, and I briefly stopped to watch the World Cup.

Internet was free, fast and easy to connect to — a pleasant surprise, as I had been warned about the bad coverage in Ghana. While I only had 3G when I was out of the hotel, the speed back at the hotel was enough to download photos and videos.

The only thing I wasn't pleased about was that the events the hotel was hosting (meetings and weddings) were often noisy. More than once, I was bothered in my room by music from them.

The hotel was modern, comfortable and luxurious, especially for Accra. But it wasn't cheap, and while the room had almost everything I needed, I missed having enough plugs, especially ones near a mirror or in the bathroom. I didn't love that the blaring sounds and loud music from the weddings the hotel hosted (that went on for hours), though. I would stay here again, but I do look forward to trying out the Marriott on my next visit to Accra.