A surprisingly stylish convention hotel: My stay at the Hyatt Regency Orlando

Articles
Tarah Chieffi is a family travel writer for TPG. Whether she’s sharing tips for planning the perfect theme park trip or finding a kid-friendly hotel, her goal with every story she writes is to inspire families to get out and explore the world.
Follow
Jan. 25, 2023
•
8 min read 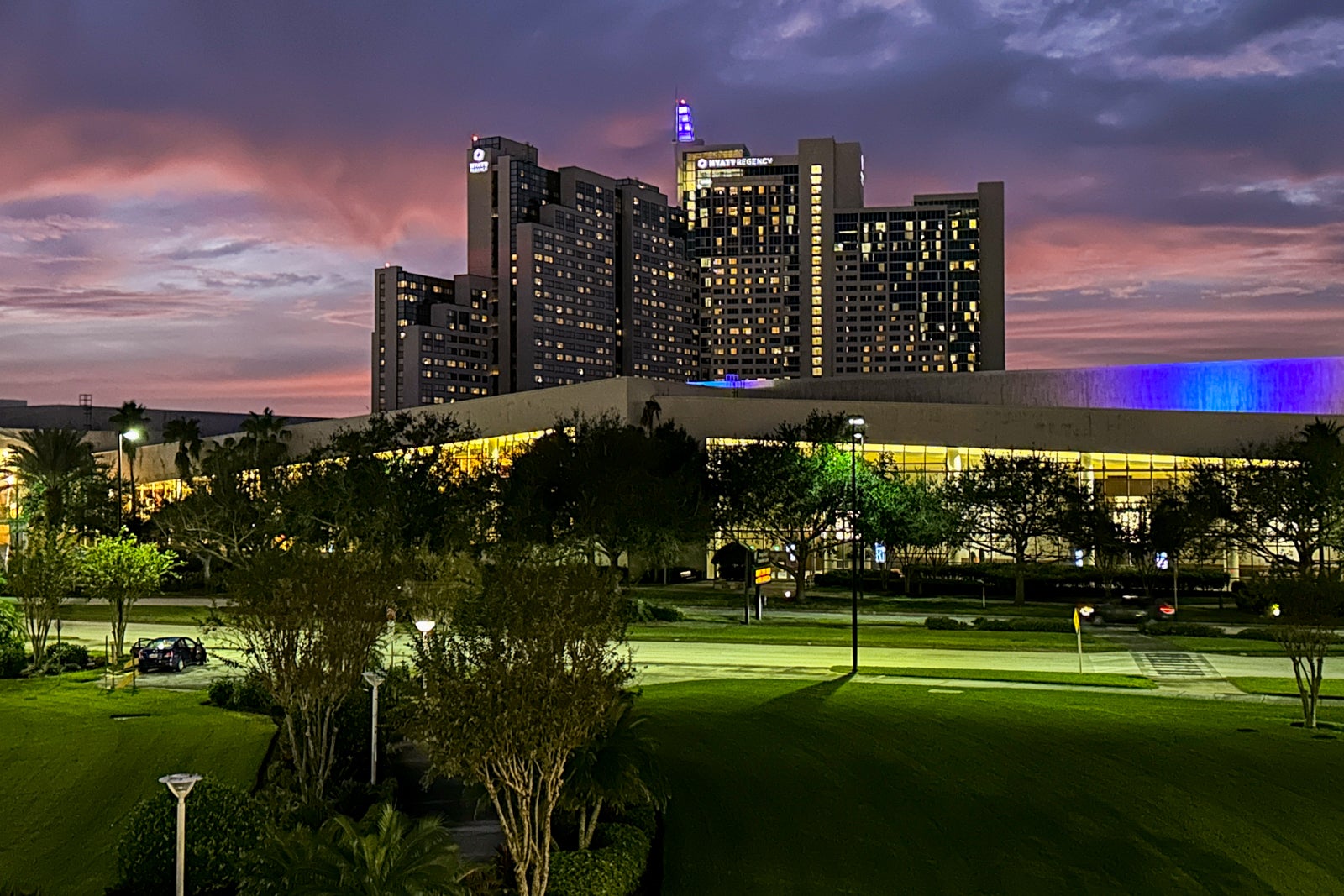 On most of my travels, I give a lot of thought to choosing a hotel that is close to the attractions and restaurants I want to visit, has the amenities I need (most importantly a coffee shop to perk me up in the morning) and fits my budget.

When I traveled to Orlando recently for a convention, however, my desire for immediate access to the city's Orange County Convention Center outweighed my need to tick the aforementioned boxes.

Connected to the convention center via a covered walkway, convenience is usually the major draw of the Hyatt Regency Orlando. But is its prime location for conventiongoers the only reason to stay there? What does it have to offer families visiting the area's theme parks and world-famous attractions?

Here's my take on this surprisingly well-rounded Hyatt hotel.

This sprawling, 27-floor property has two large, inviting pools, multiple on-site restaurants, a 24-hour grab-and-go cafe, a full-service spa and a fitness center. With its lively atmosphere and resort-style amenities, it immediately felt more like a vacation than a work trip. It's also less than 15 minutes from Disney World, Universal Orlando, SeaWorld and many other popular Orlando attractions.

The Hyatt Regency Orlando is located on International Drive, only 12 miles from Orlando International Airport (MCO). The hotel does not offer an airport shuttle, but taxis, ride-hailing services and rental cars are all available at the airport. Once you get into a vehicle, you should be able to reach the hotel in less than 15 minutes.

The hotel also charges a $30 nightly resort fee that covers premium internet access, fitness center admission and fitness classes, a discount on spa and salon services and cabana rentals, two bottled waters per day and more. If you pay for your stay using World of Hyatt points, however, the resort fee will be waived.

In one word, the Hyatt Regency Orlando felt "lively."

Not only is the hotel within walking distance of the Orange County Convention Center, but the hotel also has 315,000 square feet of its own event space. This meant there were people out and about at all times of day.

In the morning, guests were chatting over coffee at the tables outside of the 24-Hour Market and in the evening they were sipping cocktails while music played in the lobby bar. If you are the type of person to strike up a conversation with a stranger while waiting in line for Starbucks, you'll feel right at home.

The rooms, however, had a soothing, comfortable vibe. Even my standard king room was a spacious 415 square feet and had a subdued color scheme, blue patterned carpet that reminded me of rippling water and a chaise lounge by the window where I could kick back and relax.

Upon entering the room, there was a large closet and a small kitchenette area with a minifridge and coffee maker on one wall and a full-length mirror on the other. The bathroom had a large tub-and-shower combo and a large lighted mirror that also displayed the time (very helpful when you are on a tight schedule).

There were more than enough electrical and USB outlets, and as someone who reads before bed, I appreciated the reading lights built into the headboard. The TV was set up for Chromecast streaming, though I did have some connectivity issues that took a full day to resolve.

I tried as many of the dining outlets as I could during my stay and I was equally impressed by the menu and atmosphere at each restaurant. I visited the 24-Hour Market for not only grocery items and my morning Starbucks fix, but also for made-to-order quick-service items like a vegetarian grain bowl and a Caesar salad. They had a long list of pizzas, sandwiches, breakfast items and hot entrees on the menu.

At Coconuts Poolside Bar & Grill, I ordered a cheeseburger, frozen margarita and the aforementioned perfectly prepared french fries. Every bite (and sip) was delicious and I appreciated having such a great meal while lounging by the pool.

I had dinner one night at B-Line Diner, where I ordered a fish sandwich with jerk seasoning and tropical fruit salsa (and, once again, the fries). I was stuffed by the time I left, but it was hard to resist the dessert display on my way out the door.

Aside from the internet connectivity issues, everyone I encountered at the Hyatt Regency Orlando was incredibly friendly and helpful.

The amenities at this hotel are possibly what surprised me most of all. When I think of a convention hotel, I picture a small rectangular pool and a sparse fitness center with several treadmills and a weight rack.

This hotel's resort-style pool blew me away. There was plenty of room to play, swim or sip drinks in a tucked-away alcove. The hotel also has a quieter, Olympic-size pool for lap swimming.

The fitness center was equally impressive. There were separate areas for free weights, treadmills and ellipticals and strength equipment. The spa was closed when I popped by to take a peek, but the space was large and the menu displayed a full service of treatments from massages to facials and even makeup application.

From my hotel room, it took me less than 10 minutes to walk to the Orange County Convention Center. If you are in Orlando, though, there is a good chance you'll want to visit one of the city's world-famous theme parks.

The Hyatt Regency Orlando has accessible features in its guest rooms and meeting rooms, including mobility features, assistive listening devices for meetings and closed-caption or closed-captioning decoders for guest room televisions. The hotel's public areas, including the pools, spa facilities, fitness center and restaurants, are fully accessible and have accessible routes from an accessible public entrance.

I was thoroughly impressed by the Hyatt Regency Orlando and wouldn't hesitate to stay there again for a convention or if I were to visit Orlando attractions outside the theme parks. If traveling to Orlando to visit the theme parks, I'd probably stay at a Disney World hotel or a Universal hotel, but the french fries at the Hyatt Regency Orlando are so good that I might change my mind.

Featured image by TARAH CHIEFFI/THE POINTS GUY
Editorial disclaimer: Opinions expressed here are the author’s alone, not those of any bank, credit card issuer, airline or hotel chain, and have not been reviewed, approved or otherwise endorsed by any of these entities.